PL: TLY, BC, OTSOS, ASZz, a picture of two dogs

TLY — First just to get it out of the way. I really have no updates; I’m still doing exactly the same thing I was last time. I keep adding items to the list, but it is gradually getting shorter. In fact there are only six items left on it, though they are the most pervasive and difficult. Anyway, I love this book.

Blood Contingency part 22 — This felt weird to write. I don’t know if it reads weird too; that’s something I’ll have to figure out in later edits. But writing it, the first RK thing since my sad decision and taking everything down from the fanfiction sites and not advertising anywhere, felt off. I did, at least, accomplish everything I wanted to in this part. Whether I accomplished it well is another thing I’ll have to figure out later. But I did get some important stuff across.

I feel like if the Saitou of this story could be less emotionally closed-off from Sano, things would go better for them. He hides and represses so much from him… Normally (i.e. when no vampires are involved) this is something they could work around or even overcome in time, but in this scenario I think it just makes their relationship more difficult, both immediately and in the very long run. Why have I always been so unkind to these characters I’m already missing like estranged family members?

It’s been fun from the beginning to alternate moods in the two parts of this story. Here we’ve got heavy, sad even-numbered parts bookended by tentatively happy odd-numbered ones. It hasn’t always been so direct a happy/sad contrast, but I’ve tried to keep it always a contrast of some sort. Seriously, though, remind me never to write a story this difficult ever again XD

Unless I get a really good idea for one, of course.

Of The Same Opinion Still — Yes, I am choosing to capitalize that “The” in the title, because it looks weird to have one word of the five not capitalized. That aside, here’s the deal: this is a DC Animated Universe fic. I know; where did that come from? Last year I was astonished at how much I was coming to love Batman, and this year I’m having the same experience all over again with Superman (and the amazing Lois Lane). Still, I didn’t expect to get so excited I would start writing fanfiction about them.

In the past, it’s been rare to nonexistent for any fandom besides Rurouni Kenshin (and, to a lesser extent, Gundam Wing) to catch my attention and touch my creative instincts to the point where I started plotting out fanfiction. And as for actually completing stories based on other canons… well, if you glance at my Miscellaneous Fanfiction area, you can see just how often that’s occurred. Part of it is definitely that it takes a special combination of circumstances to arouse that interest in me — I have to love the canon but not be entirely satisfied with the relationships therein, for one thing — but I think part of it may also have been that RK almost had a near monopoly on my fanfiction-writing energy.

So that I’m over-the-moon excited about this new story about Superman, Lois, and Batman may be because this set of characters and events has really gripped and inspired me, but it may also be because I’ve been freed somewhat from the iron grasp of Rurouni Kenshin. It may be a little of each. I don’t know if I’ll get way into writing about DC superheroes and their mad love, but for the moment I’m clinging to it as a timely and very happy (if possibly temporary) new fanfiction interest in the wake of RK.

Anyway, I’ve spent the last few weeks working out a detailed summary for this fic from beginning to end, and I’m hella pleased with it. The summary is 14k words long, if that gives any indication of how long the story itself may end up being. Currently (and it seems a pretty safe assumption that the summary will translate well to the actual fic without much large-scale alteration) it has 23 scenes (unless I’m miscounting) narrated mostly by the three main characters (though Harley Quinn, Mercy Graves, and Jimmy Olson each have one too).

I’ve put it into the rotation on my schedule for fanfiction Sundays, and I’m unspeakably excited about it. I don’t know if anyone will read it — I may be headed into another fanfiction cul-de-sac where no one ever ventures — but it’s damn well going to satisfy my need for Superman/Batman/Lois love.

Aku Soku Zan(za) — I can often get these parts written and edited in one sitting, as I’ve mentioned before, because rewriting takes less time and effort than new writing; and for that reason this story previously sat between each instance of Blood Contingency and Heretic’s Reward. Now I’ve added all sorts of other stuff to my Sunday schedule, including all my in-progress HoH projects and the aforementioned BATMAN LOVE DCAU fic, and ASZz has to be satisfied with making only every third entry on the list instead of every other. It’ll still update pretty frequently.

The current part didn’t get finished and posted yesterday for two reasons. The first is that I have Satan (our after-hours phone) this week and got called into work yesterday (and as a matter of fact had to go in again today; these poor dogs), so some hours I would otherwise have spent writing were instead spent on that.

The second reason is Yonai Fumihiro. Remember him? The guy that wrote Zanza the long-winded letter that started everything? Anyone familiar with the original version of this fic knows that another letter from him appears in the story at this point. And remember how I was never satisfied with the wording of the letter in the original, and vastly more pleased with how I rewrote it? Well, here’s another set of absolutely ridiculous sentences (paragraphs, actually, this time) I have to come up with, and it kinda takes forever.

It also makes me simultaneously giggle uncontrollably and groan in anguish. Yonai’s language was always intended to be funny, since otherwise the character is nothing more than a means to an end, and it is funny… but it’s always just dreadful to come up with and then read over these absurdly convoluted sentences. Like, can I squeeze another clause in there? It hurts, but maybe I can…

Anyway, the other thing I’m working on in this part is, of course, Saitou’s frame of mind after last night as well as the recent interview with Tokio. I think it’s going to make more sense, and progress a lot more naturally, than it did before. Hopefully I’ll be able to finish that up this coming Sunday, and then the week after that start my BATMAN story!!!

A picture of two dogs — 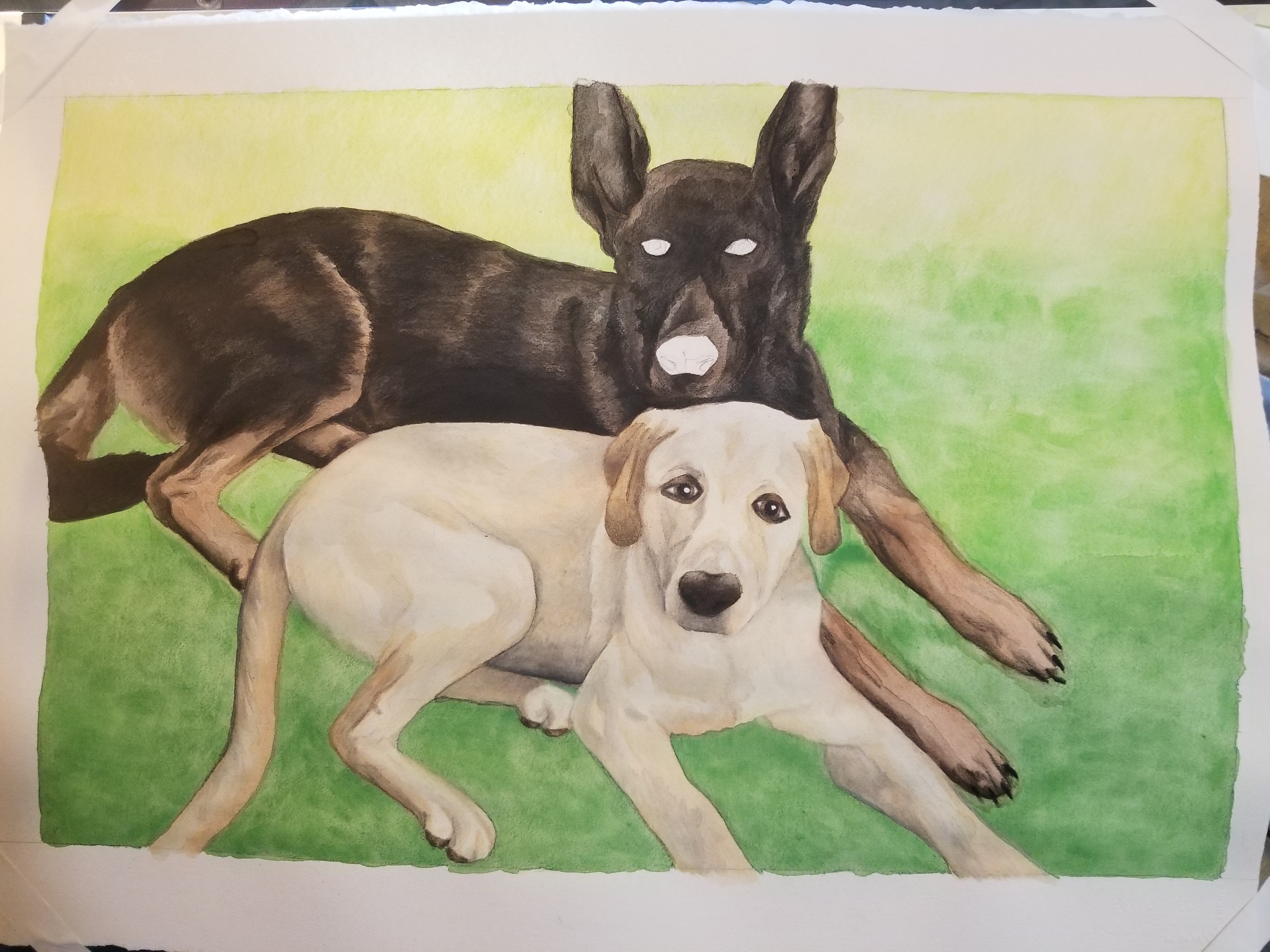 You can undoubtedly see how I’ve tried to balance out the lights and darks in this picture by a very simplistic method. Actually the problem of practically black and white dogs presenting an imbalance was one I anticipated from the very beginning, and even before I’d started drawing (even before I’d bought the paper) I was browsing classical art featuring similar subjects. Monet’s “The Strollers” convinced me I could arrange the background such that it would work as a whole, and I think I’ve managed it OK.

The balance between neutral and less neutral colors has actually proven more difficult than the lights and darks; in plainer terms, I don’t like the way the bright greens look against the dogs’ more neutral shading. To help with this, I greyed up the background as follows: 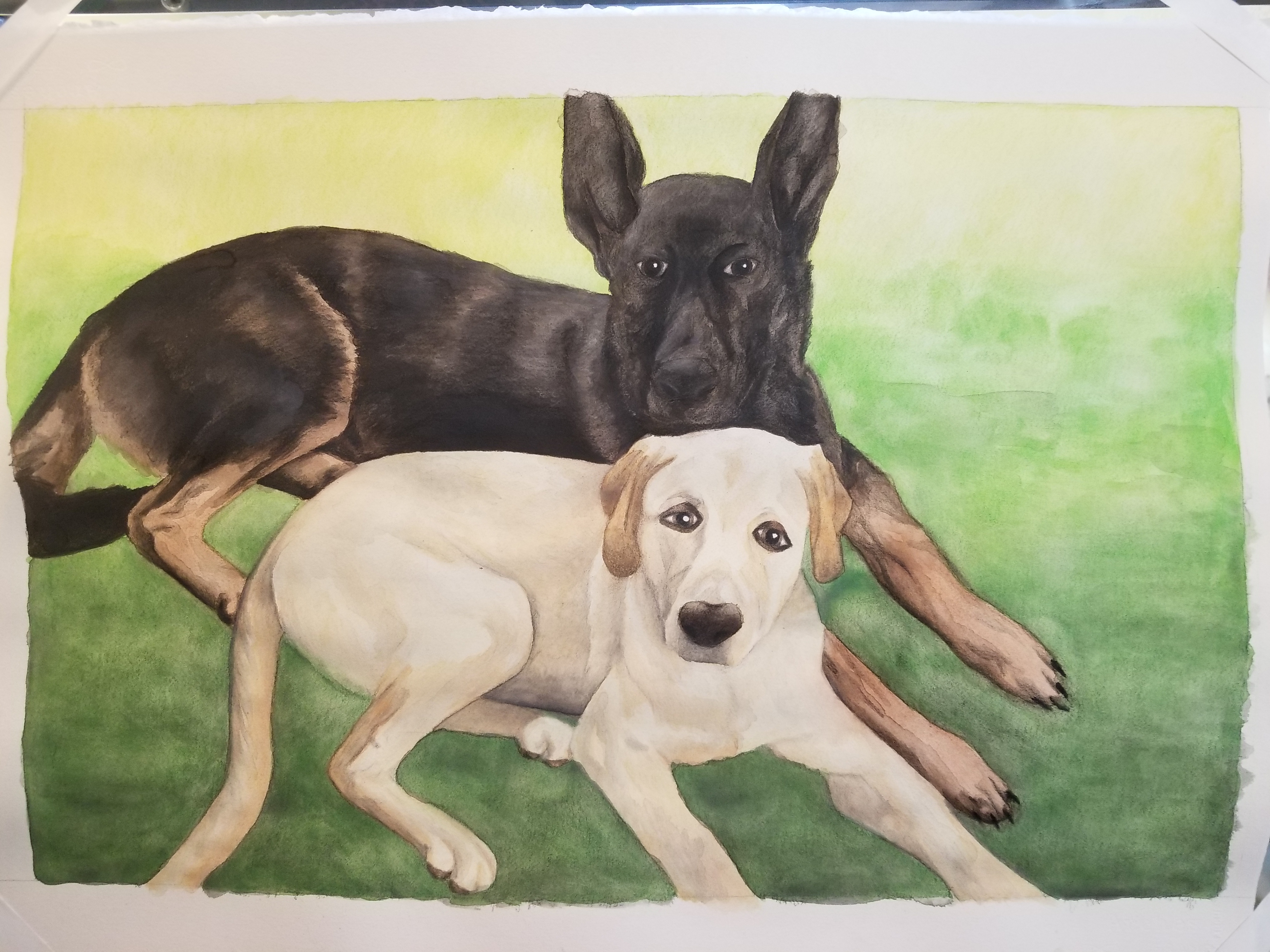 That, I think, has been somewhat effective. I’m working on the grass blades right now, though, and returning to the bright green problem. We’ll see if I can make it work.

At about this point in the proceedings, my visiting nephew scribbled on Ruger’s face in pencil. And remember how I mentioned that with this paper, once color goes down, nothing erases? Well, it turns out that pencil on top of the color that won’t erase will erase, leaving the color beneath completely untouched. It was more or less a miracle. You can’t even tell there was ever a scribble there. I was damn lucky I didn’t have a Sharpie lying around, though.