TLY — Last week I listened to the entire book again and made notes about stuff I wanted to do, which more than doubled the length of my checklist. Fortunately, most of the items were quick fixes, and I pretty well got them all done on Saturday.

One item, however, was to significantly shorten a scene near the beginning; I had in mind to chop it in half, but I’ve only managed to reduce it by one quarter so far. Further shortening will require cutting more major parts of the scene, so I’m going to wait until my next reread of the book as a whole to decide how I feel about the new length and whether I have to prune even more viciously.

So the read-aloud program I use on my phone, mostly for fanfiction but also obviously for stuff like this, is a great app, but it does have some quirks that can’t be fixed. During this reread, I noted the narrator will pronounce ‘papá’ correctly, but can’t say ‘mamá’ — essentially the same damn word — to save its life. It puts the emphasis on the first syllable and give it an A sound like in ‘apple.’ Bizarrely, it gets the possessive — ‘mamá’s’ — right.

This continually made me think of the line from Wizard People, Dear Reader, “The guy who slayed your mama is your dada,” and it was really weird to draw that association.

Anyway. After getting that easy-ish stuff done and knocking the checklist back down to six items, I spent several hours working on getting one of the long, more labor-intensive items done — in fact, the last character consistency check besides the main character.

After consistency checks for the main character himself (and even to a certain extent including that), everything left is stuff that I’ll work on during the course of read-through editing. So that means I’m just about done with the checklist as a whole (though we’ll see if that changes with the next complete reread XD). So that means I’m creeping even closer to being actually finished. So freaking exciting. This has eaten my brain all week, much as OTSOS did prior to that. And speaking of OTSOS…

Of The Same Opinion Still — I started this story for reals yesterday, and wrote (and mostly edited) the first scene. I had several hours left during which I could have started the second scene, but I didn’t think I could get it finished before the end of the day, so I decided to save it until next time.

Anyway, this thing is still just ridiculously exciting. It was a lot of firsts, so several different types of enthusiasm came into play: the first new story I’ve started since last November, my first step into a new fandom, the first time I’ve written about BATMAN… The whole experience was delightful and engrossing.

And of course besides writing that opening scene, I also read through (and tweaked in spots) the full story summary, so that was exciting too. I’m really pleased with this idea, and think it’s going to be pretty great. I still don’t know how much of this attitude is born of actual engrossment in the ideas and the fandom themselves and how much of it is satisfaction to be writing for a canon other than RK, but still. Yesterday was a good day.

An item of interest here besides patting my own back. At least not since Pride of her Parents (which I started when I was 17), I haven’t written extensive fanfiction for any English-language canon. As I’ve written about Saitou and Sano, I’ve always had what I thought was a pretty clear imaginary sound in my head for Suzuoki Hirotaka and Ueda Yuuji speaking English and saying the dialogue I wrote. But I didn’t realize just how restricted I was by the difference in language, just how hazy my imagination actually was on this point.

Because as I wrote this scene about Harley Quinn and Batman, I could hear Arleen Sorkin and Kevin Conroy saying these lines a hundred times more clearly than I ever imagined my RK boys. And though this may in part be explained by my having watched three BtAS episodes yesterday before getting started on the scene, whereas I always experienced RK primarily through the manga and haven’t actually watched the anime in years, I don’t think that entirely covers it. In any case, it was a very interesting experience.

So I’m looking forward to starting the next scene, to seeing if I can’t summon the voice of Dana Delany with uncanny clarity in my mind’s ear. For now (i.e. for this coming Sunday), I move on to the next fanfiction on the schedule, which is Nine Decades.

A Picture of Two Dogs — As is often the case, I kinda stopped taking progress shots near the end. They would just have been of grass in various stages, but it might have been kindof interesting to see it before I put the heavy grey overlays on. Oh, well.

The final progress shot, in fact, is actually of the finished picture– 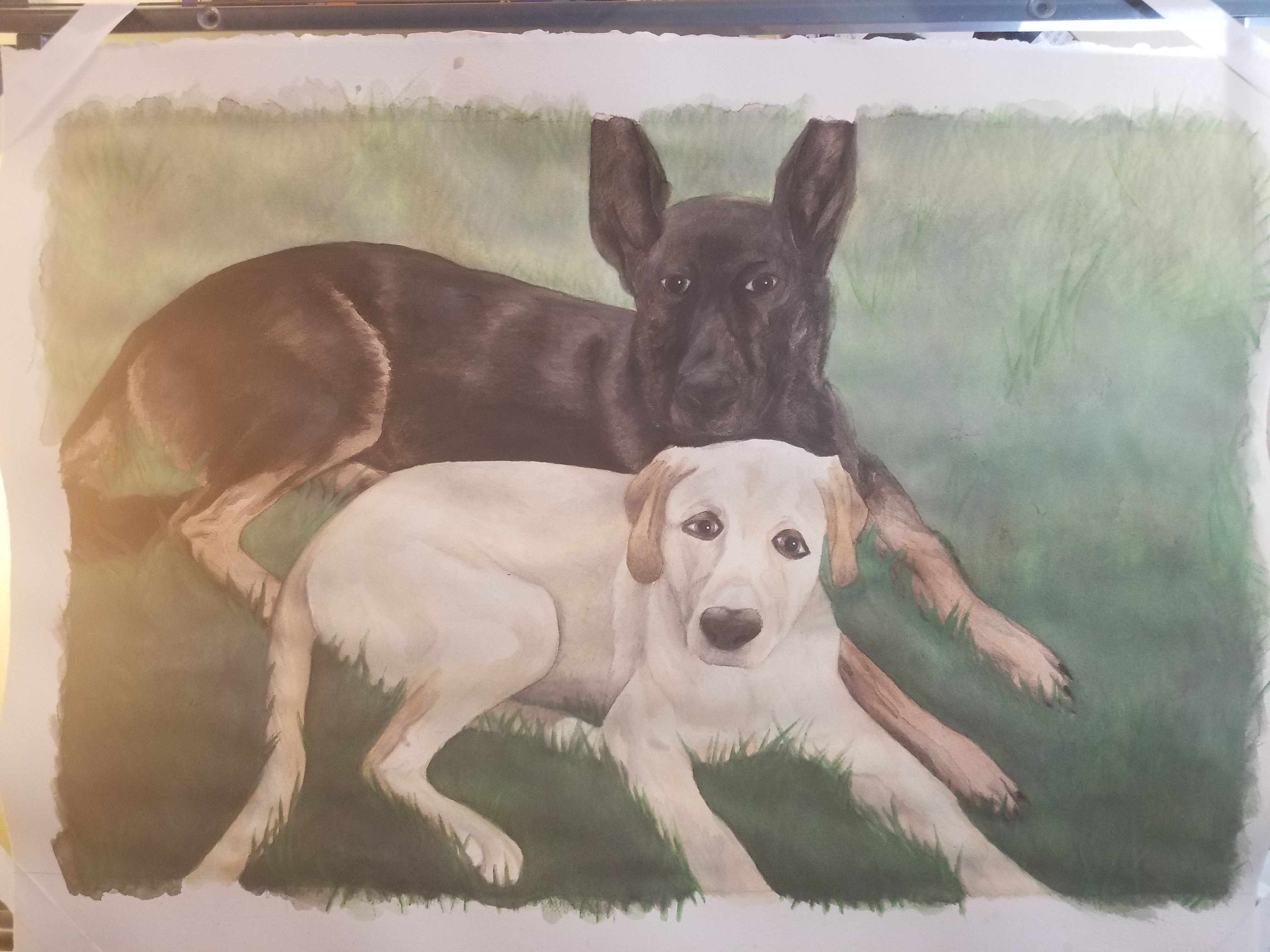 –though weirdly lit (again), taken more as a precaution before I worked on flattening the paper than to show actual progress.

To flatten the paper, I turned it over on top of some blotting paper (so there wouldn’t be standing water underneath, which might have affected at least the light grey), spread out an entire cup of water across its surface, and then laid my old drawing board on top of it. It worked perfectly, so now I have that process in mind for future projects of this size.

Then I went to a FedEx store to cut the edges off, since it turns out the paper cutter here at my house has this obnoxious guard thing and won’t do anything more than about two feet across. And it turns out there’s a nerdstore next door to FedEx, so I got a Superman as well but this is not relevant to the two dogs.

So I’m OK with the picture in general. I don’t like Hammer’s face, and I’m not sure about the proportions of either dog despite having blocked the thing carefully all over again. But it’s not terrible. Its recipient will be back in town in a couple of weeks, and I texted her to ask whether she wanted to wait to see it first in person or look at it right away; she chose the latter, and seemed very pleased with it. Hopefully she will remain so.

I, meanwhile, intend to purchase more of this same paper and get to work on another project soon. It may be several smaller pieces before another big thing, but we’ll see.