We start with a little grey cat (who would keep eating his bedding, but the absence thereof did make for a better playing field) going to town on a little ball: 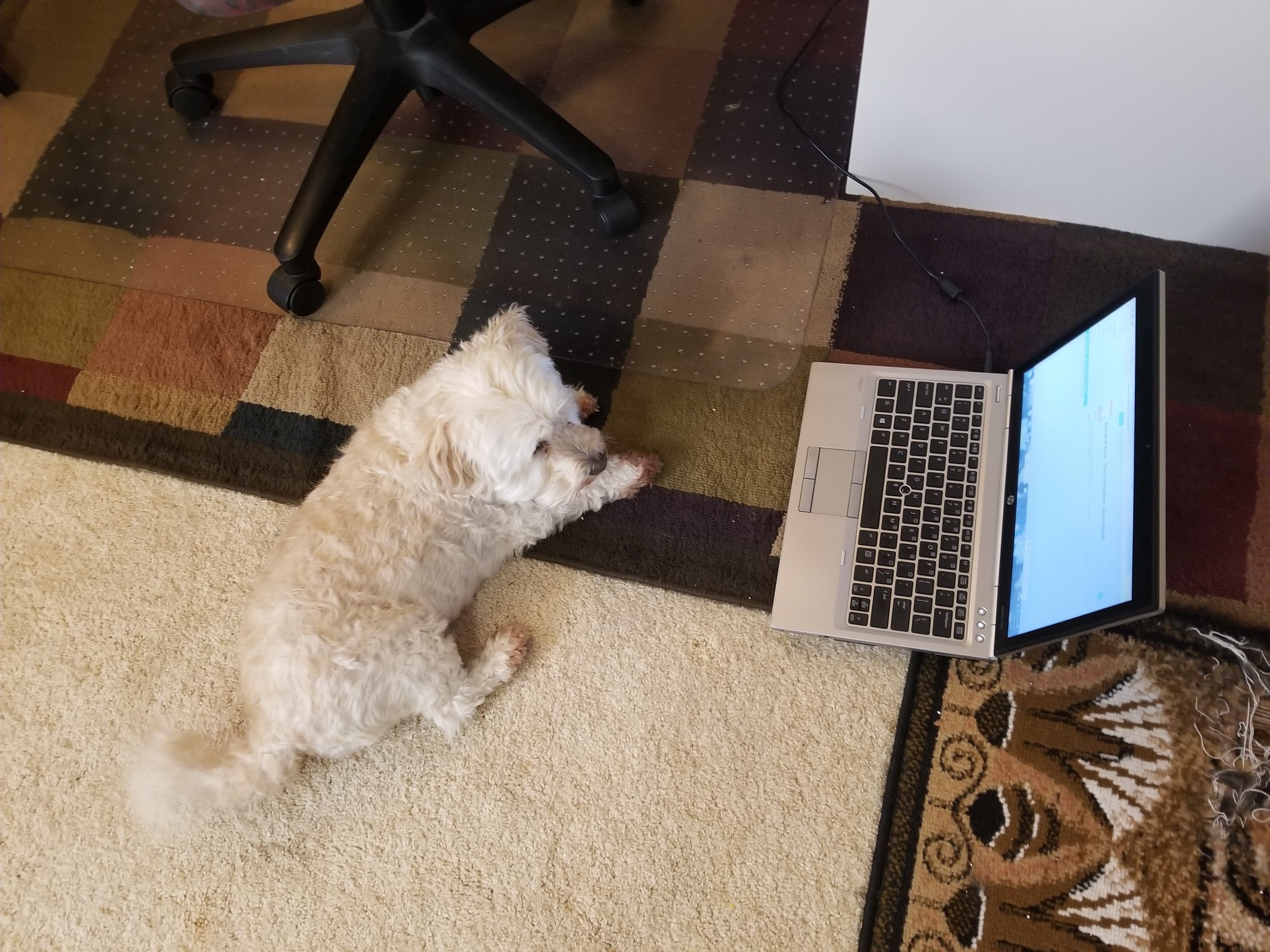 In actuality, I use my old computer for converting audiobooks (as I’ve mentioned elsewhere), and it sits on the floor while it’s working. Hiko happened to be right next to it, and whenever he looked in that direction, it appeared he was using the computer. However, he always looks at me so avidly, it was difficult to get a picture of him looking at the computer. You can’t tell that I’m shaking my foot just offscreen here to get his attention in the right direction XD

There’s a longish post I need to make that various circumstances have kept me from making, but without context here is a salad I ate: 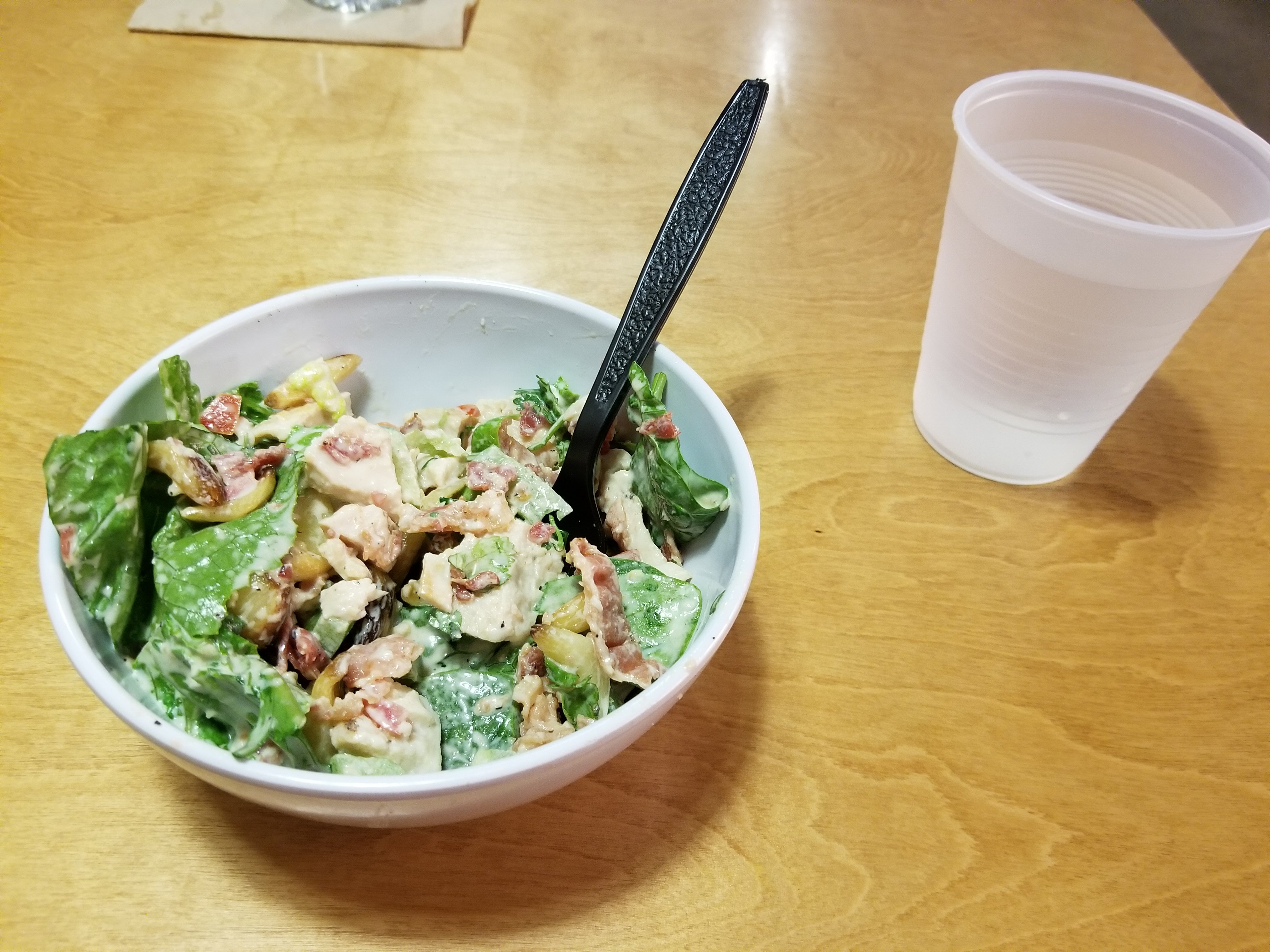 We really should have been closed the day before Independence Day; we only did thirteen surgeries, which is the lowest number I’ve ever seen and distinctly no good for business. I came home at noon, and didn’t get to show off my super cute scrub top and matching hair clippities as much as I would have preferred. So here’s a picture: 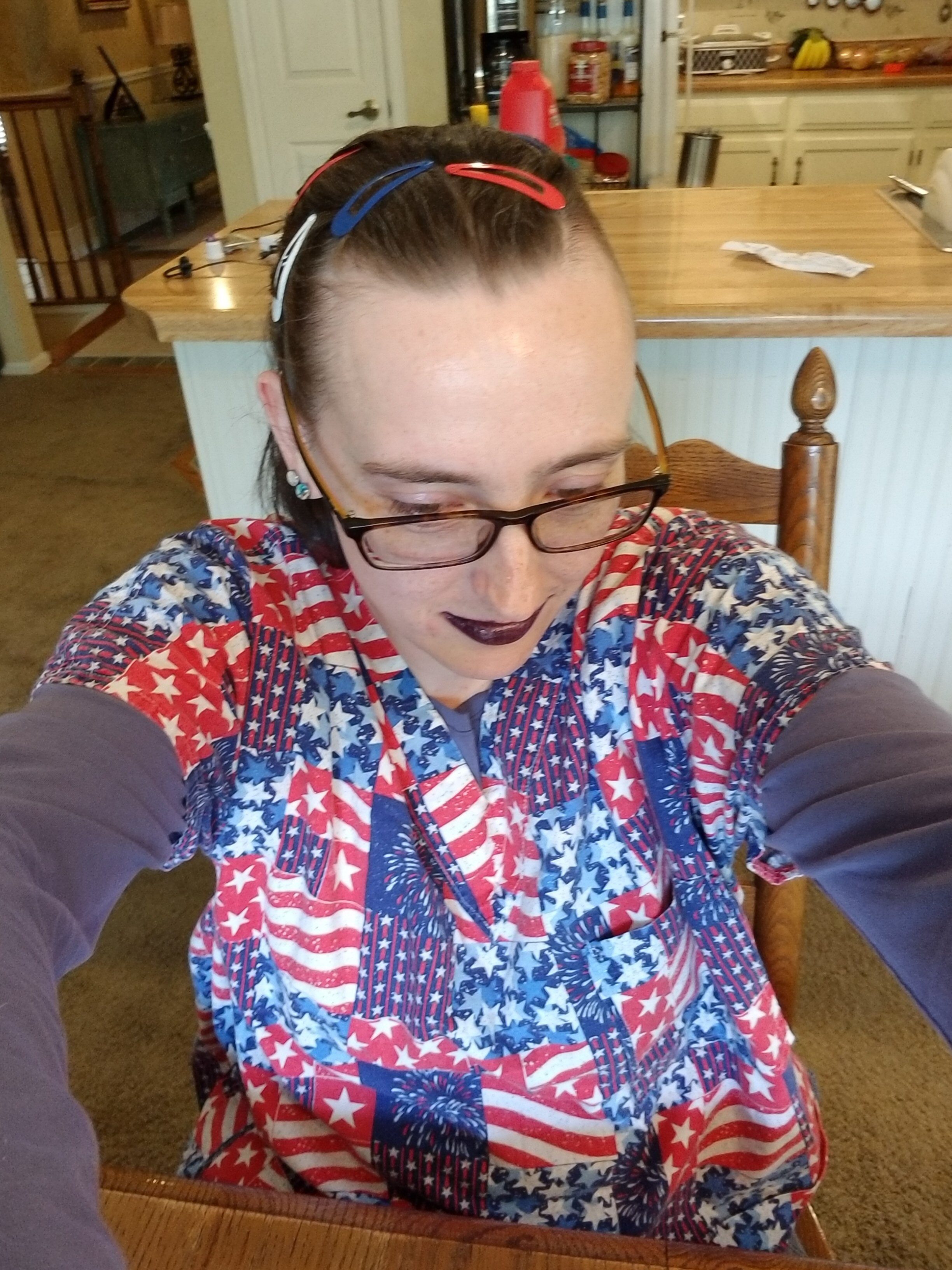 I actually took this shot (or, more accurately, had my dad take it) to show how big A Picture Of Two Dogs is, but I’m putting it in this entry too in order to document The Cutest Dress In History: 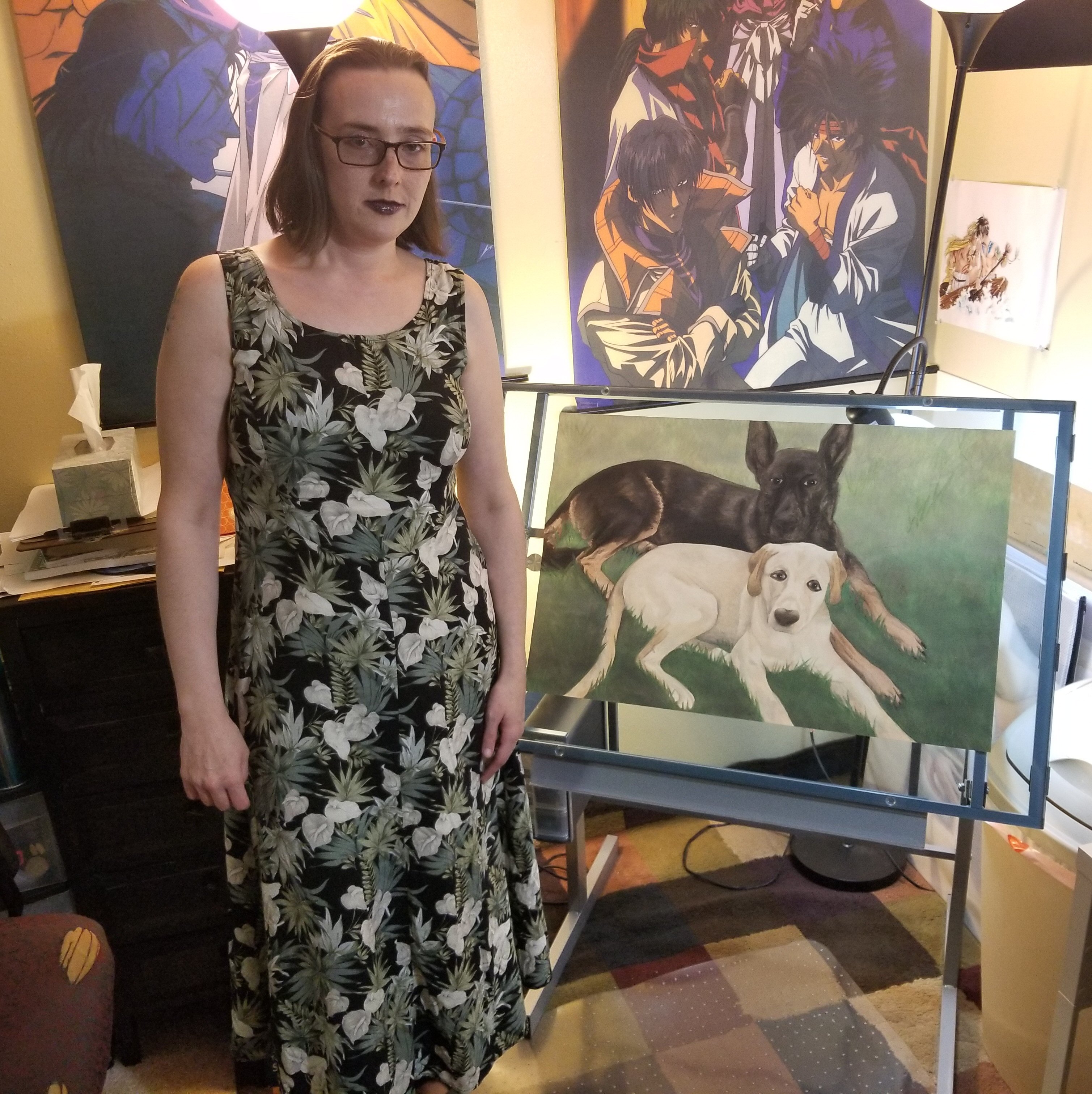 I found it at the Arc for $6 two days earlier than this, and wore it at the first opportunity. I don’t look very happy in that picture, but I really, really was.

Have you ever seen a munchkin cat? This was the first one I’d encountered in person. Note the leg length. 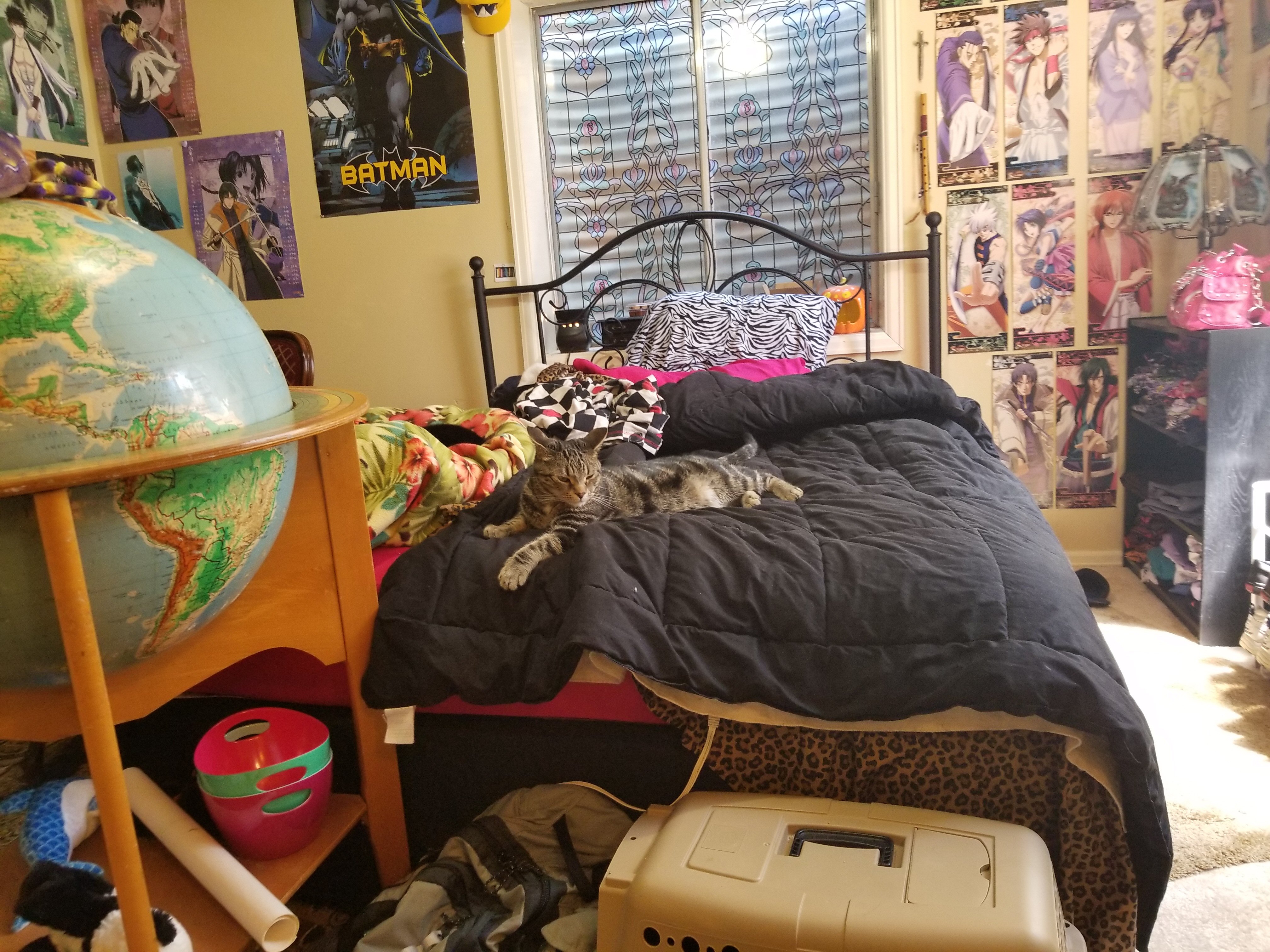 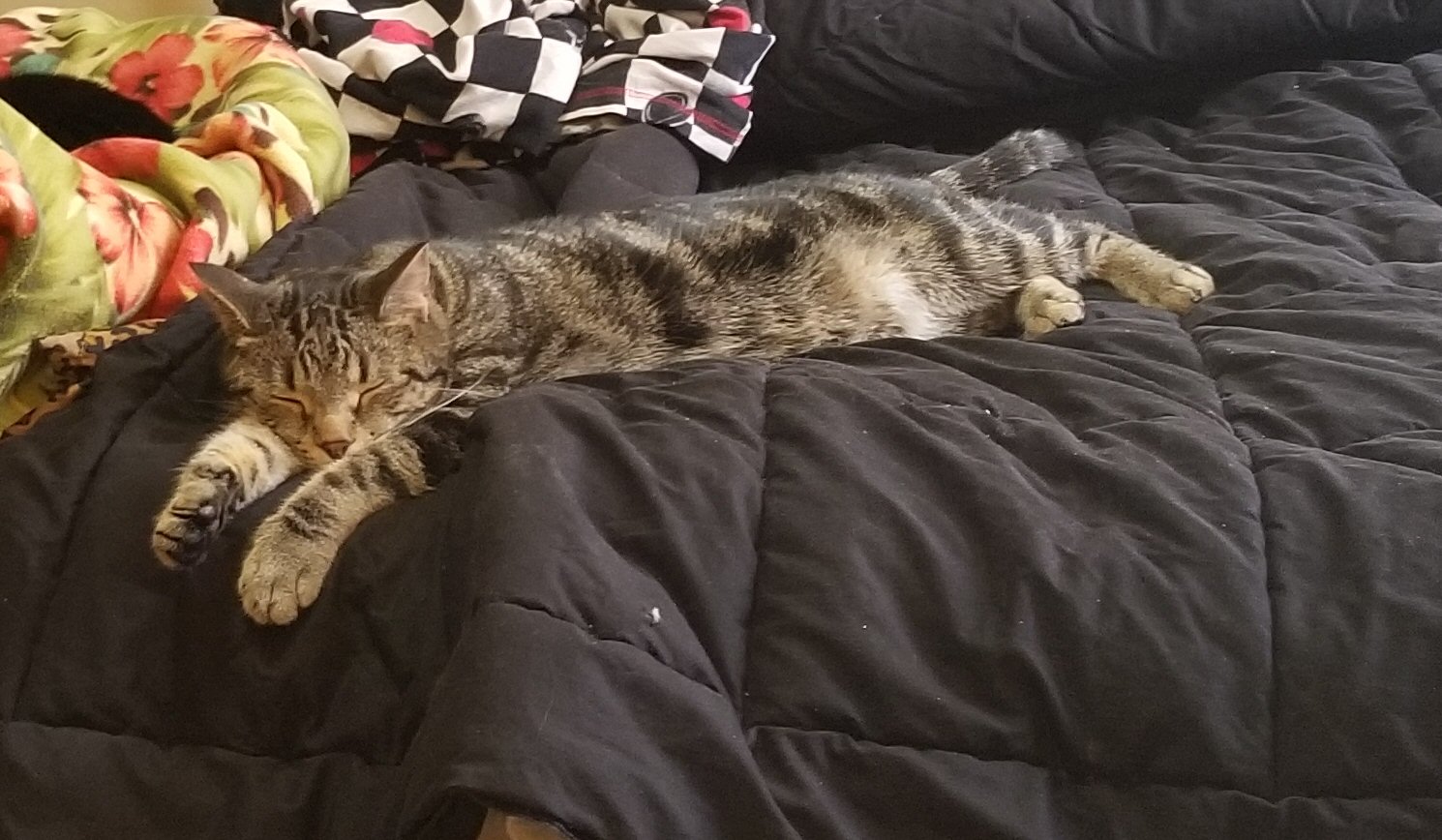 Also he slept in the sun. It creeps across the bed and onto the floor in the mornings, and the cats (and the dog) take advantage. 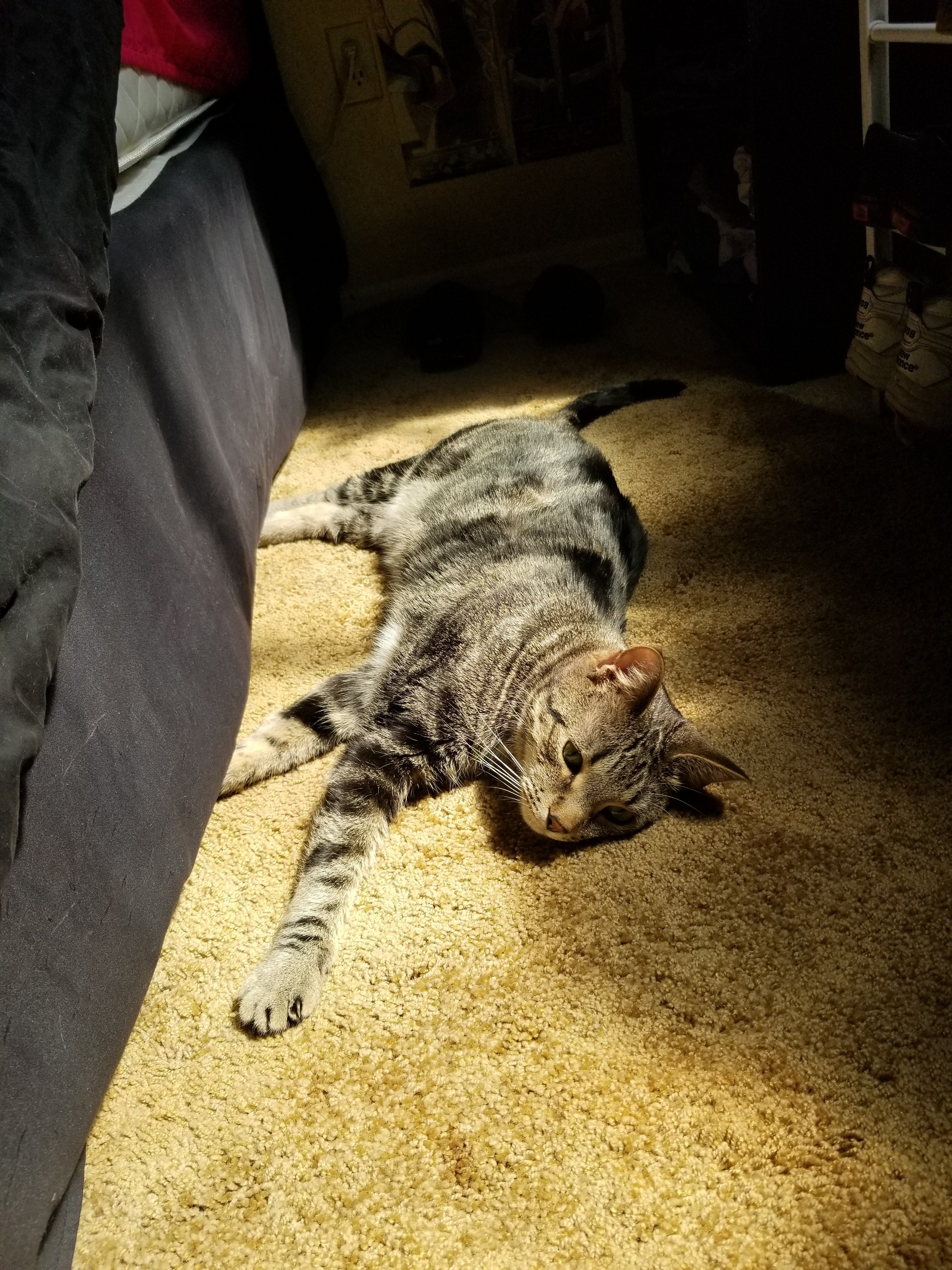 The cats also love it when I change the linens, as I’m sure I’ve mentioned before. Here’s Waybee enjoying the electric blanket and the little bed in a different spot than usual. 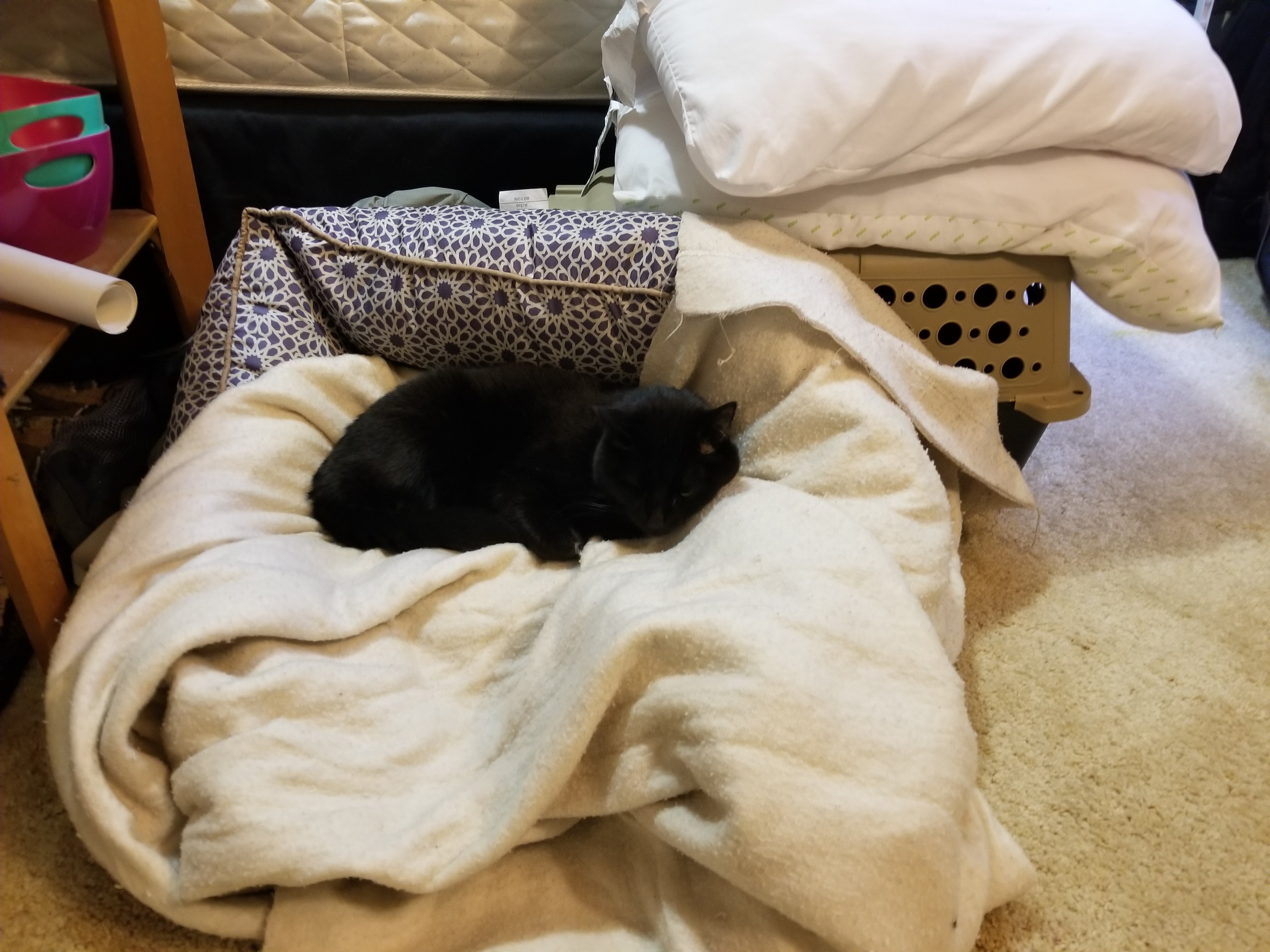 Most cats, after surgery, eventually shrug off the blanket we put on them and wander around their cage or find a new place to sit. This cat, however, seemed to like having the blanket on her, since she stayed under it all day. 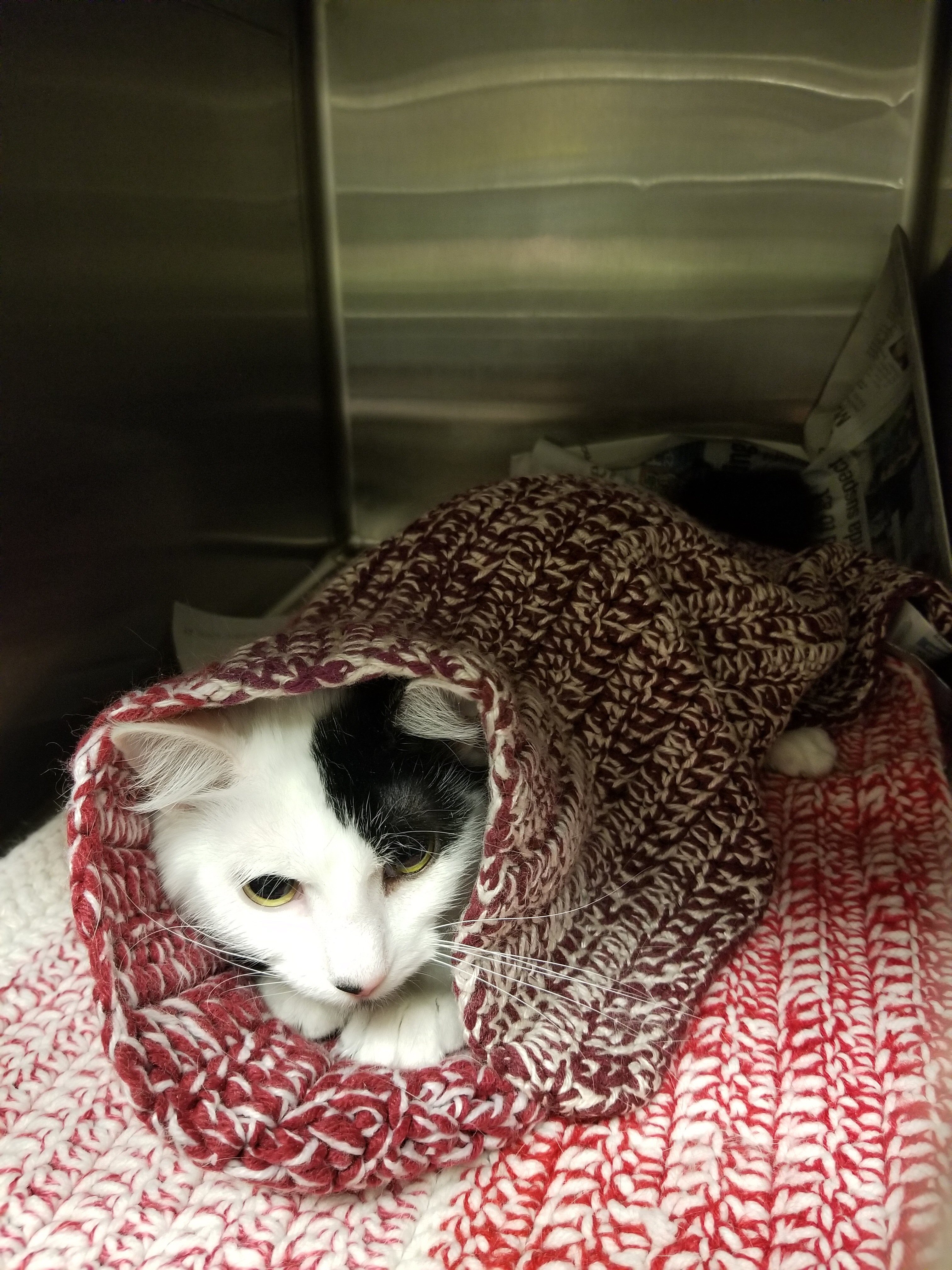 Later, when she was checked out to see if she was doing well enough to go home, my co-worker rewrapped her after the fact, and she stayed like that again. 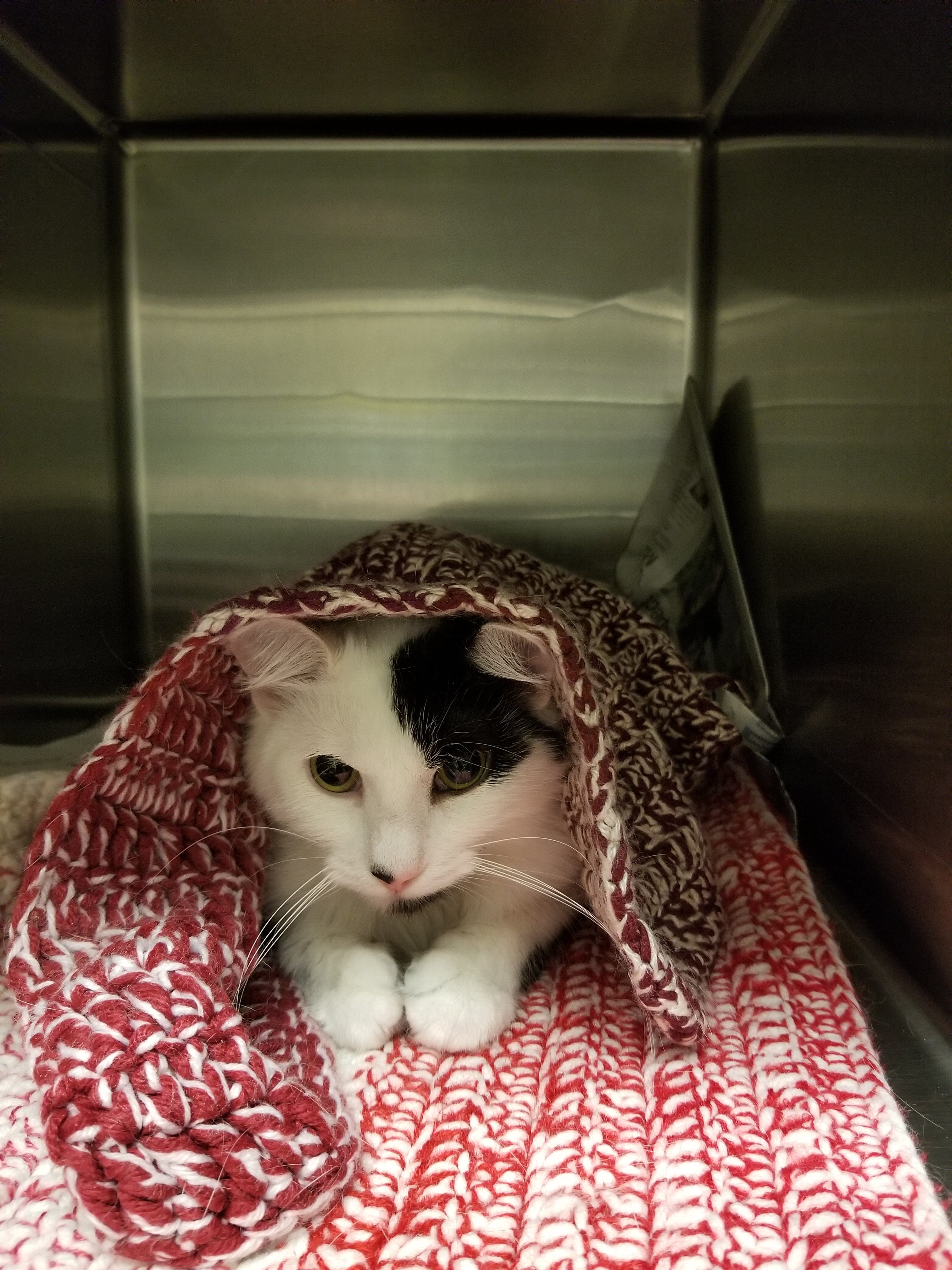 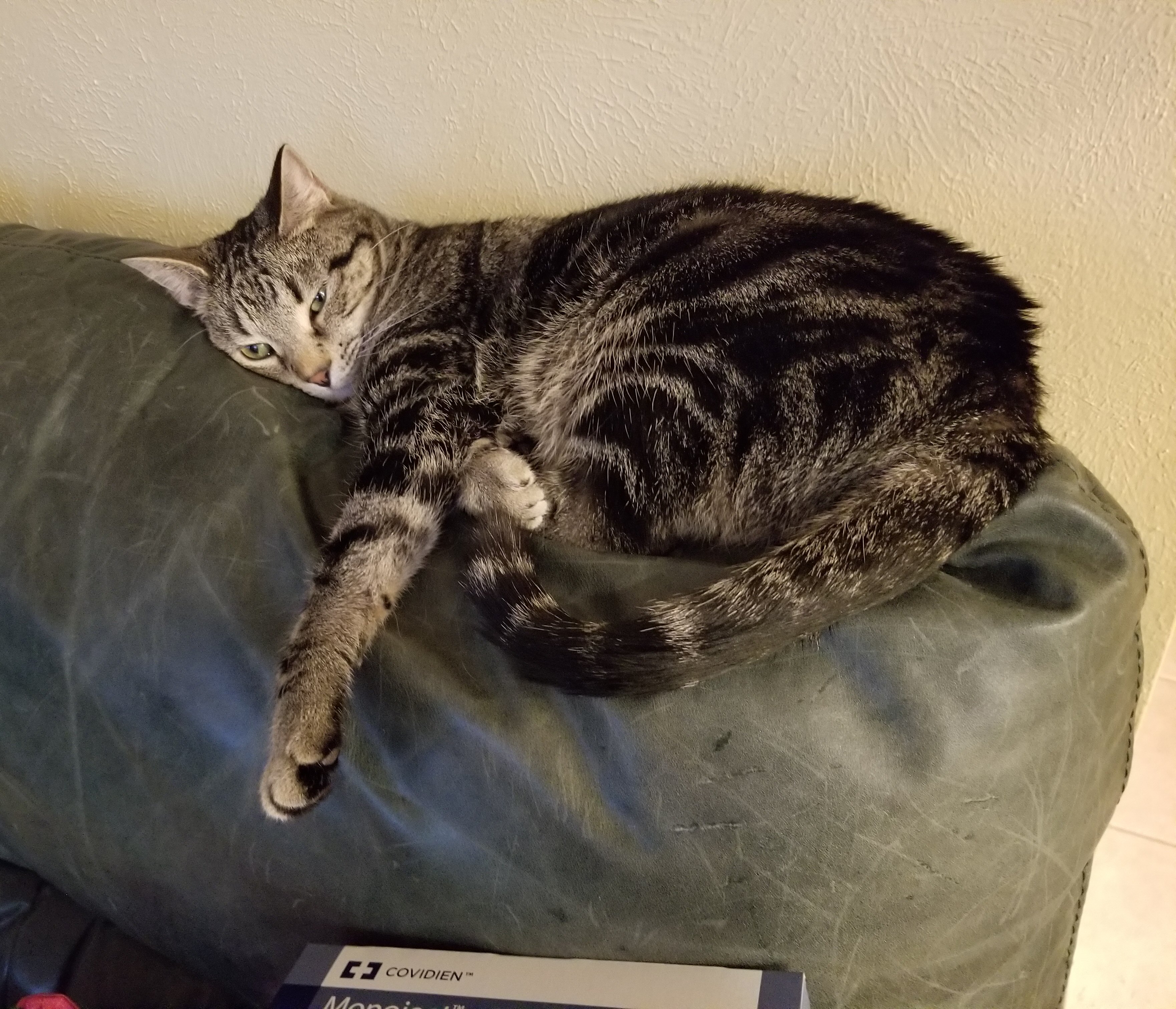 As I’ve mentioned, they often sleep in their litter boxes overnight. But when I came in, this little gal was sitting bolt upright in hers and giving me this look… 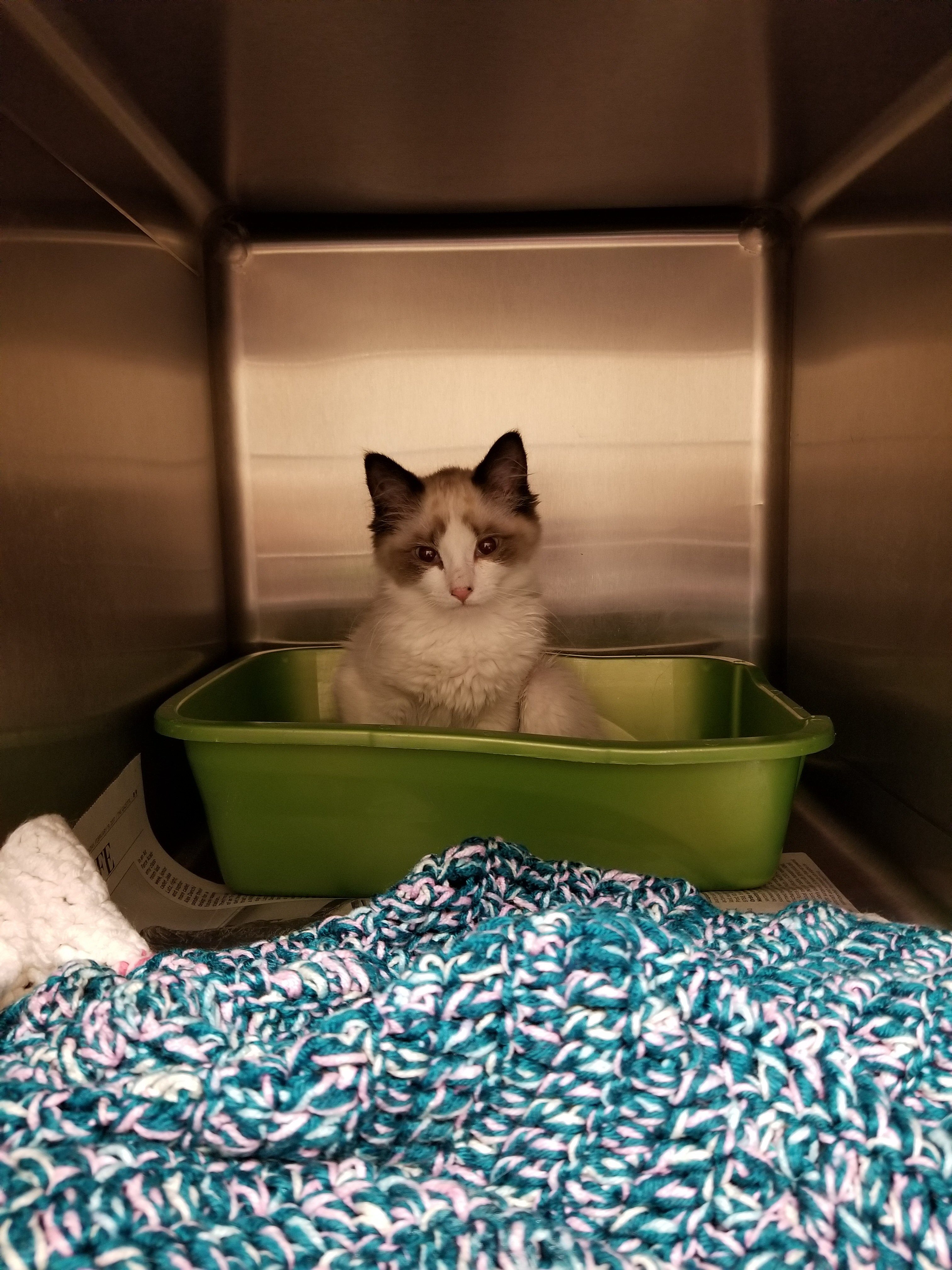 Someone at work (I don’t know who) kindly left me an Espeon, presumably because it looks so much like a cat. Now it helps me with my check-ins. 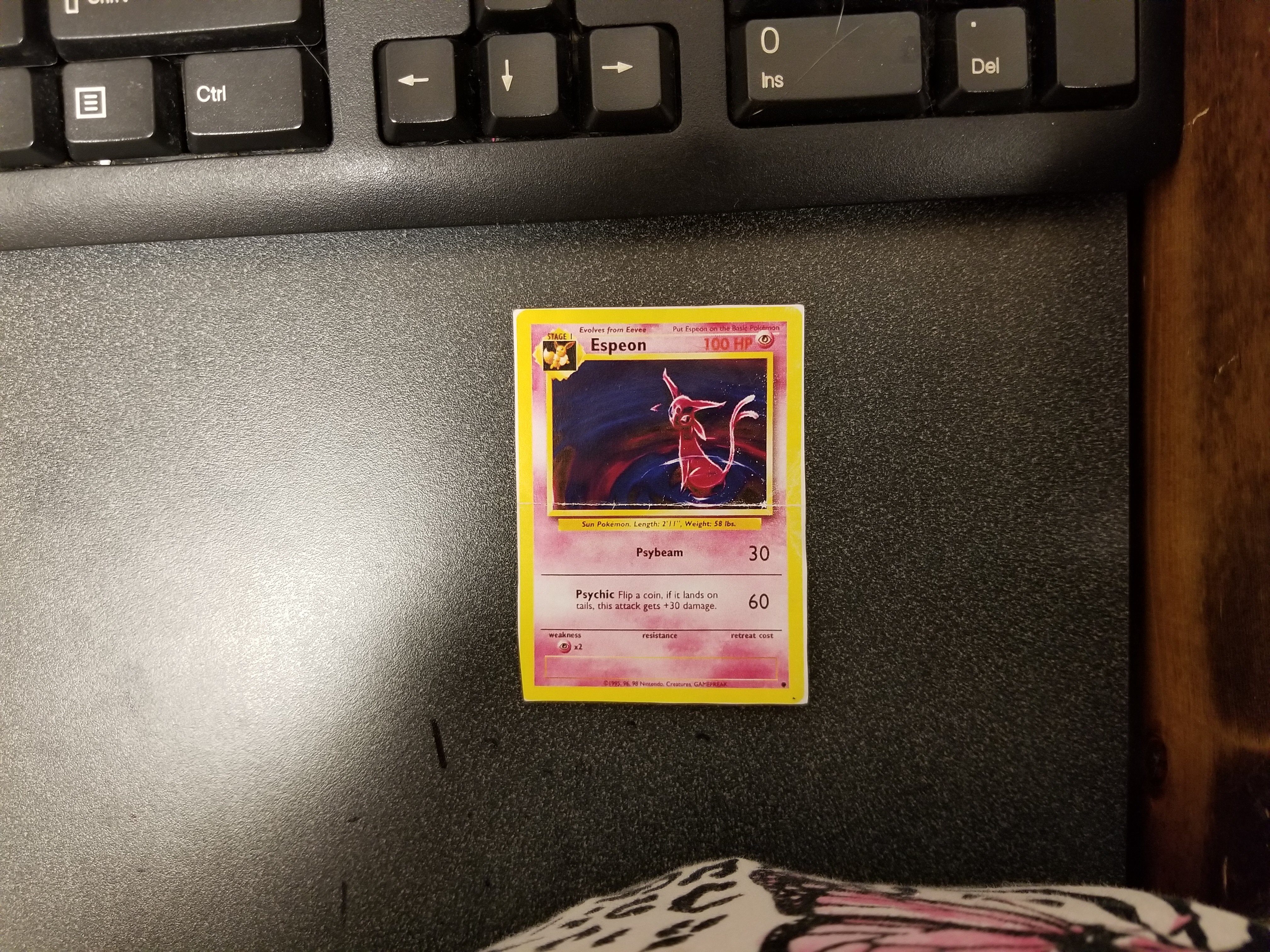 Later, I was listening to BSSM music on my computer, and when the song Dark Kingdom Shitennou came along, I happened to look down, and then I LOL’d.