For my birthday, my parents gave me a requested present: a three-tiered plastic shelf thing to use to organize my figurines and such. Witness the new glory of my display shelf!! 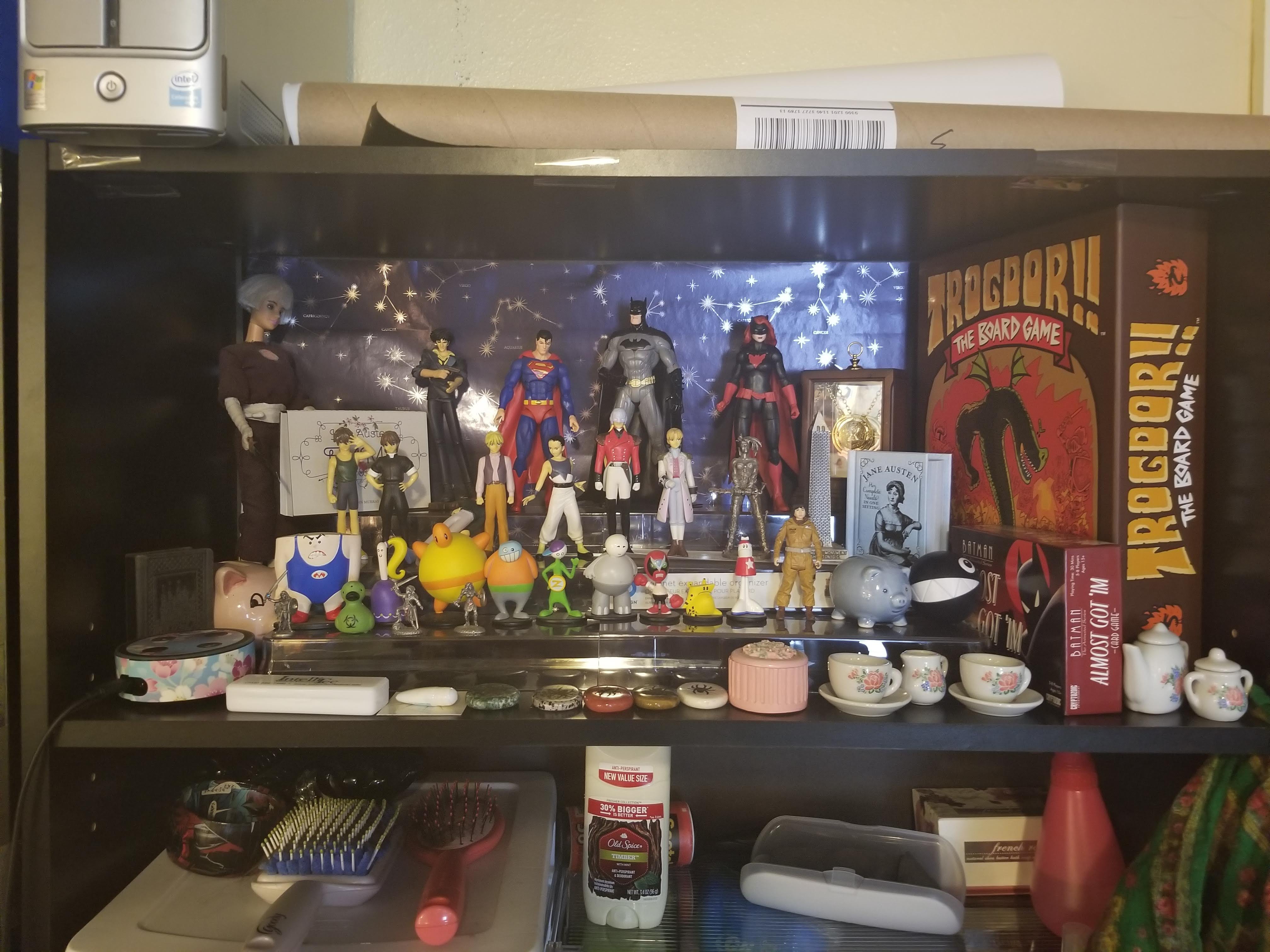 (Yes, Trowa fell over, and I didn’t notice until after I’d taken the picture.)

I custom-ordered this CowCow dress, and could not be more delighted with it:

That picture is from just when it arrived; I was totally gross and in need of a bath, but I had to put the dress on and get a picture. It looks much better when I’m clean and wearing black leggings and my tall black boots.

Another, very casual birthday present my mom gave me was her store credit at Rainbow. She’d ordered something from them online and wanted to return it, so she’d sent dad into the store to do the return. He, of course, forgot to bring the credit card it was purchased on, so they could only give him store credit. And shopping at a physical store is something my mom simply isn’t up to anymore, so she gave that to me.

I browsed the clearance items, and found some adorable tops, some leggings, the cutest boots in the world, and also this, like, $2 watch: 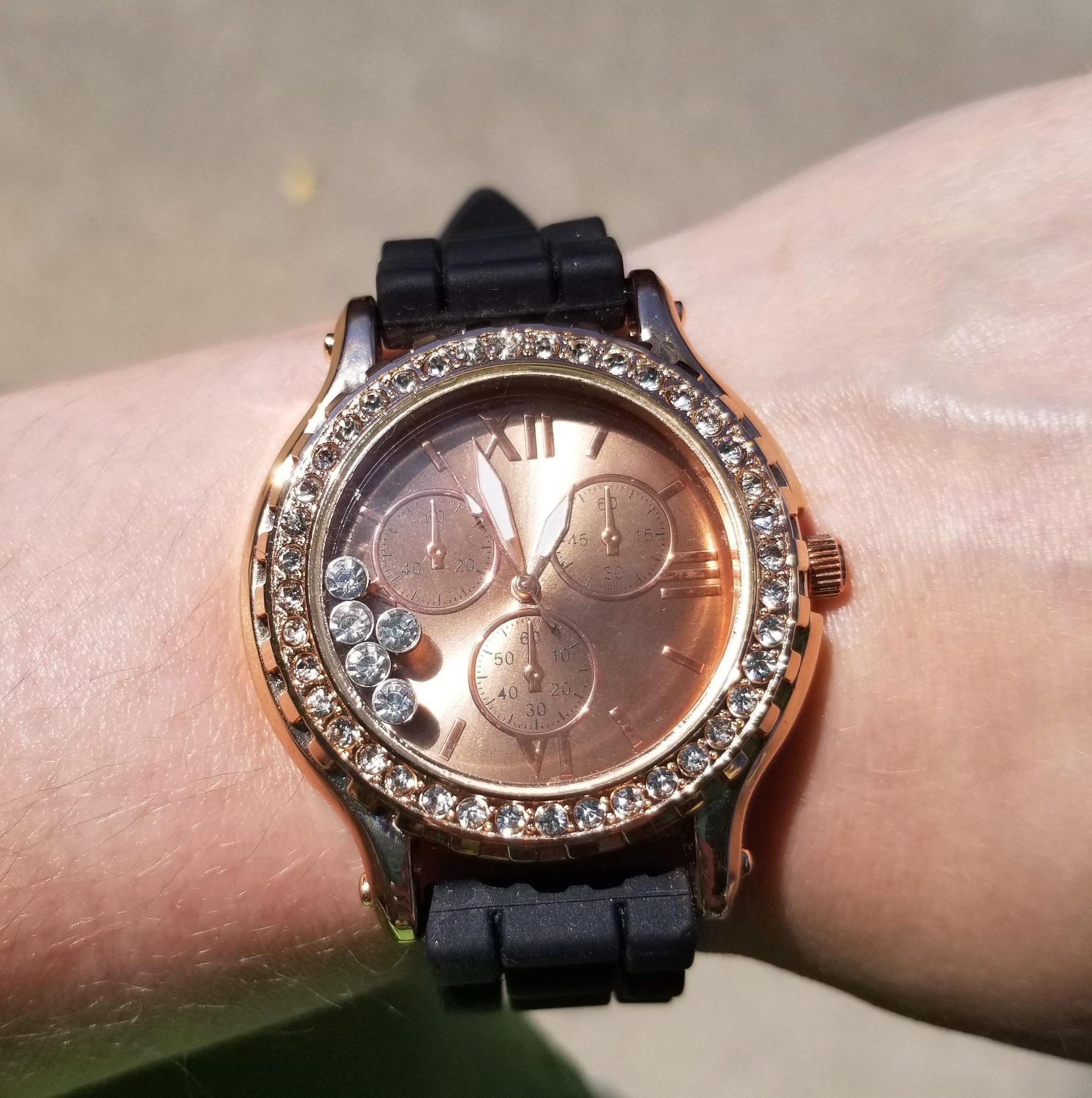 Now, here’s the thing about me and watches: I’ve never been able to wear thems. I inherited this trait from my grandmother: they die within a few days (digital) to a few weeks (analog) on my wrist. It’s always been rather frustrating. But it occurred to me that if the drugs I’m taking could negate my food allergies, maybe they also affected whatever it is in my body chemistry that’s murder on watches. It seemed worth a try, and if the experiment failed… well, it was still, like, $2.

But it kept running. It ran and ran and ran, telling time accurately and never slowing down, and weeks passed and nothing happened to it. This was a new sort of Miracle, if not exactly as life-changing as The Miracle (the one that allowed me to eat fruit and vegetables and nuts), still pretty damn exciting. Isn’t it such a cute watch?

Of course then I realized that a smart watch is not technically a watch, but rather something more similar to a cell phone, and I could probably have been wearing one of those all along without trouble. So I bought a smart watch, and that’s all I wear now. But the cute watch from Rainbow still sits in my getting-dressed area and reminds me that sometimes really good things happen.

Beeko sunngled amongst the clean laundry as he sometimes does. 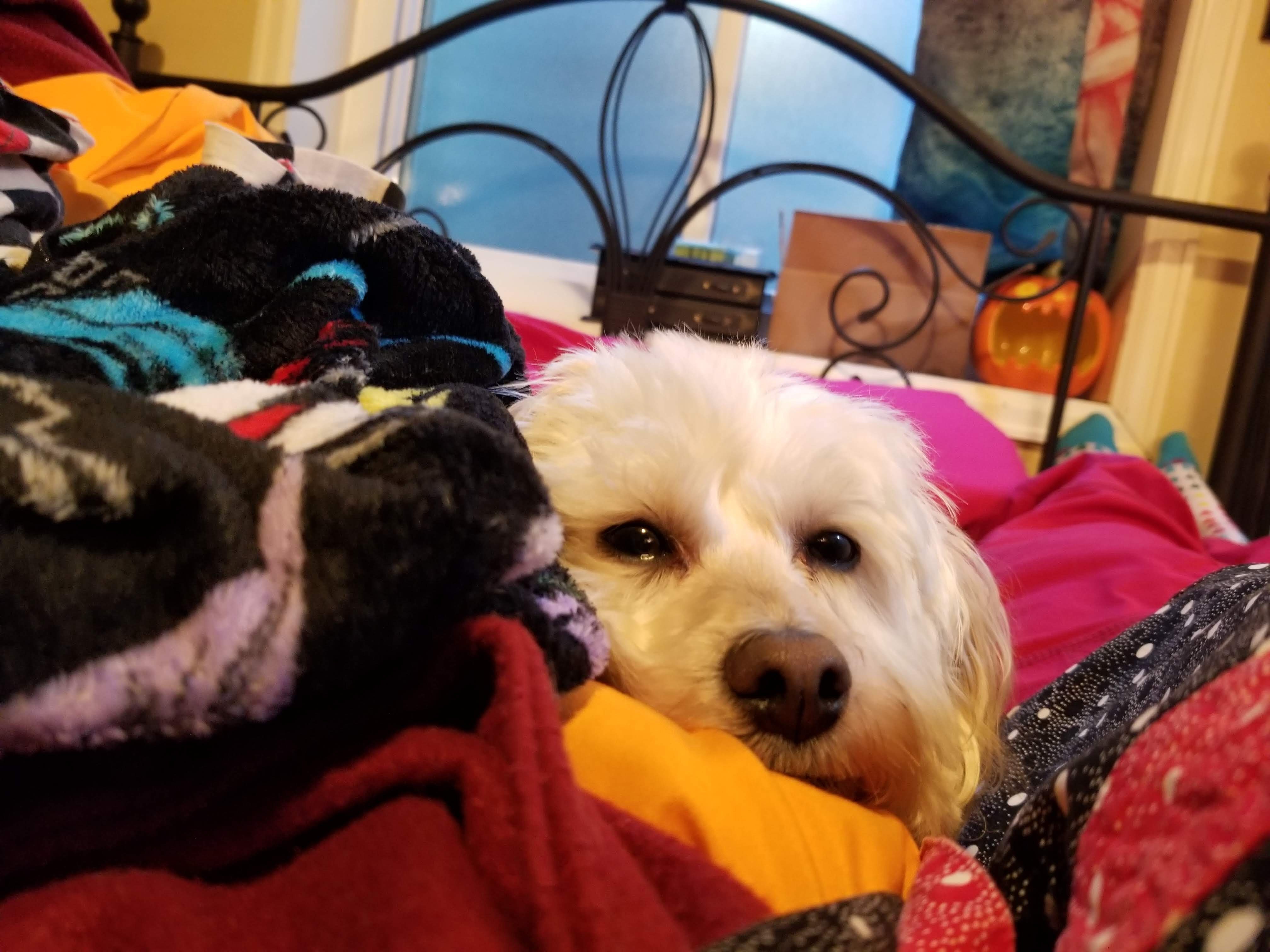 OK, I don’t really remember why I made this video of a cute cat at work lookin’ around, but here it is:

And here he is doin’ a lick: 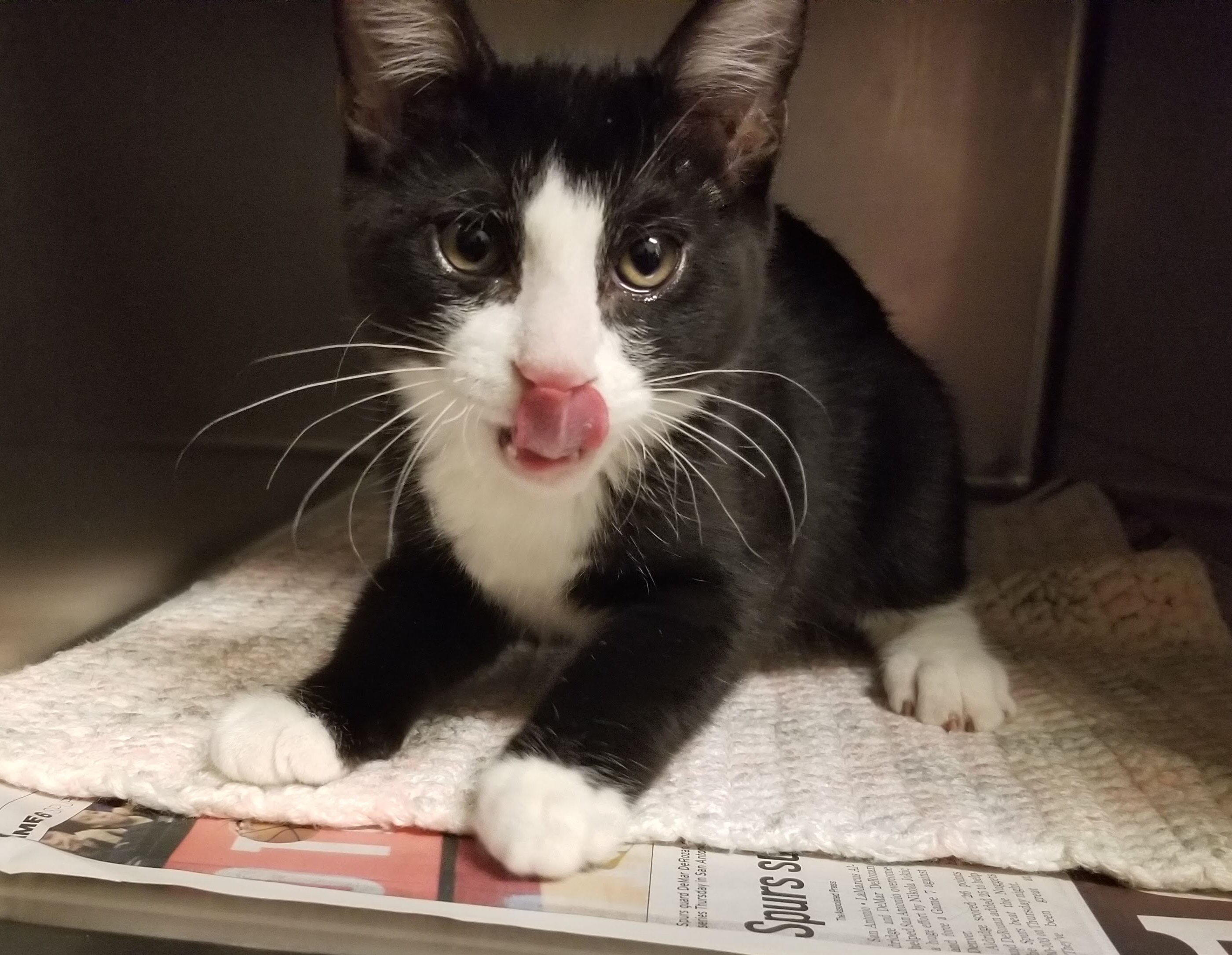 That same day, this adorable pie slept on his own paw: 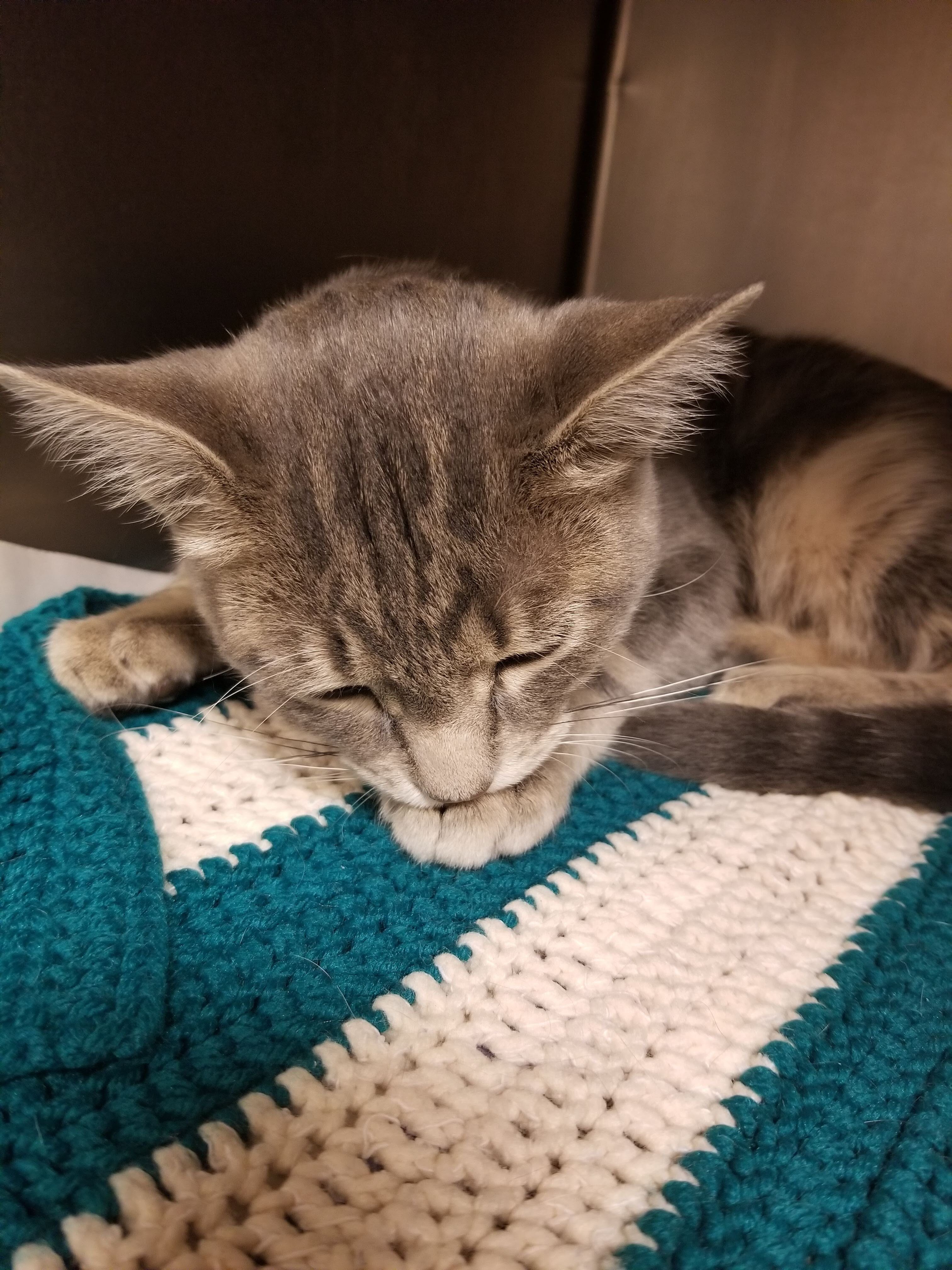 When I get home from work, I dump all my stuff messily on the bed, to be cleaned up (or not) after I’ve fed the animals. And on this day, Piper decided to get inside my bag: 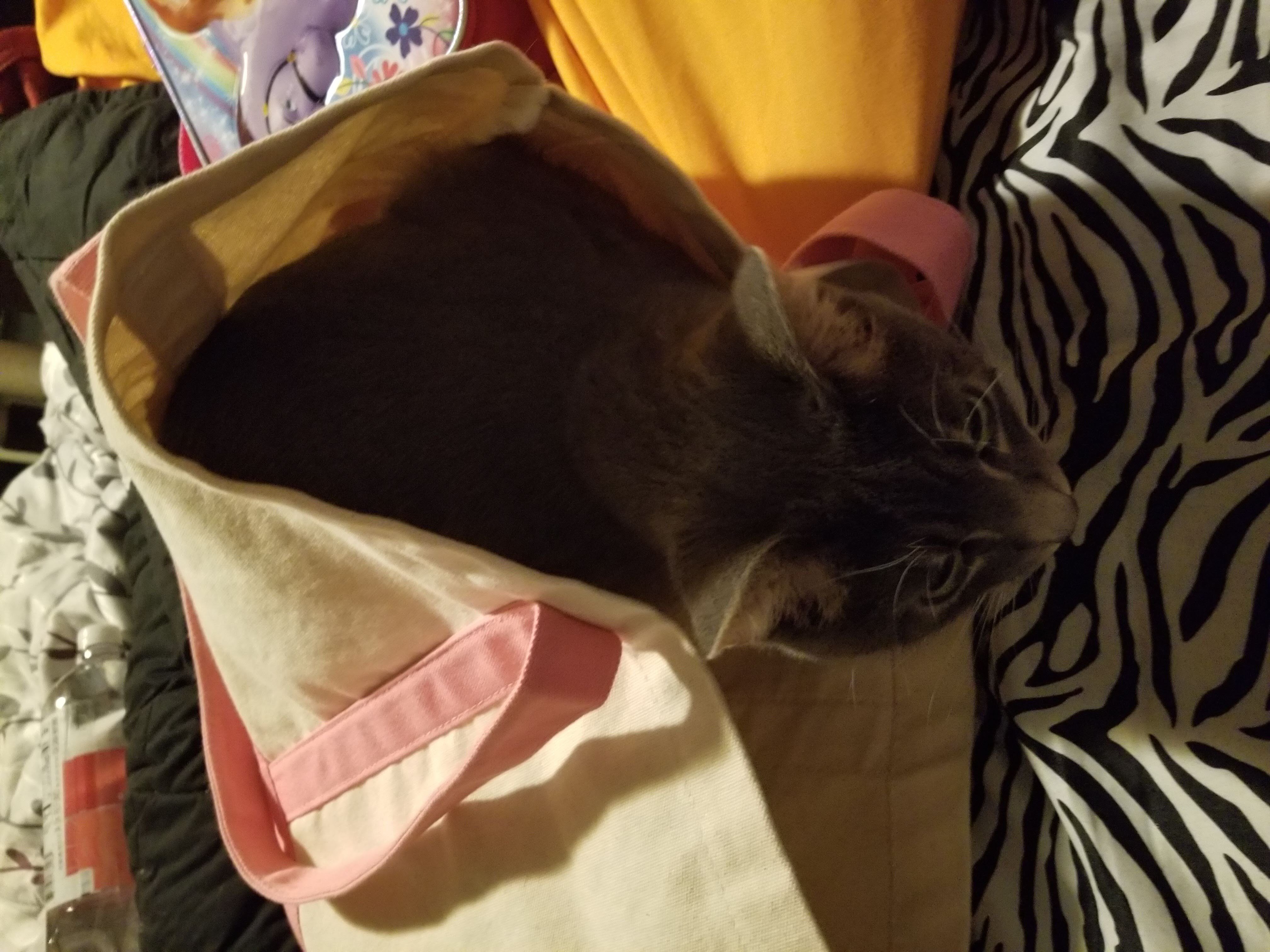 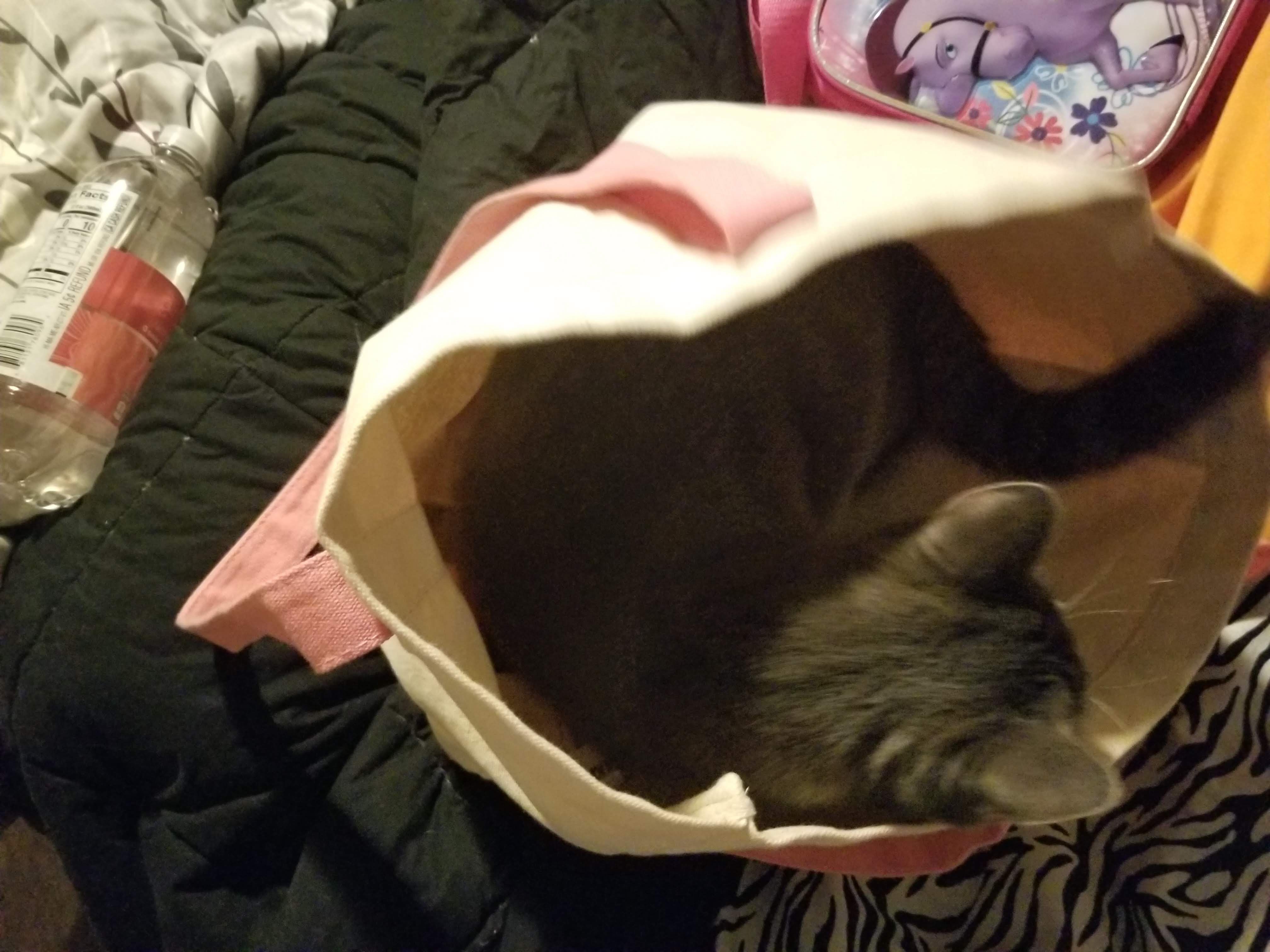 She’d never done that before, and it was vera cute.

As a belated birthday celebration, brother and I went to Santa Fe for a couple of days. I love Santa Fe. I took almost no pictures, though. This first one was just the “We’ve safely arrived” assurance to send back to the parents that worry about their kids on long drives. 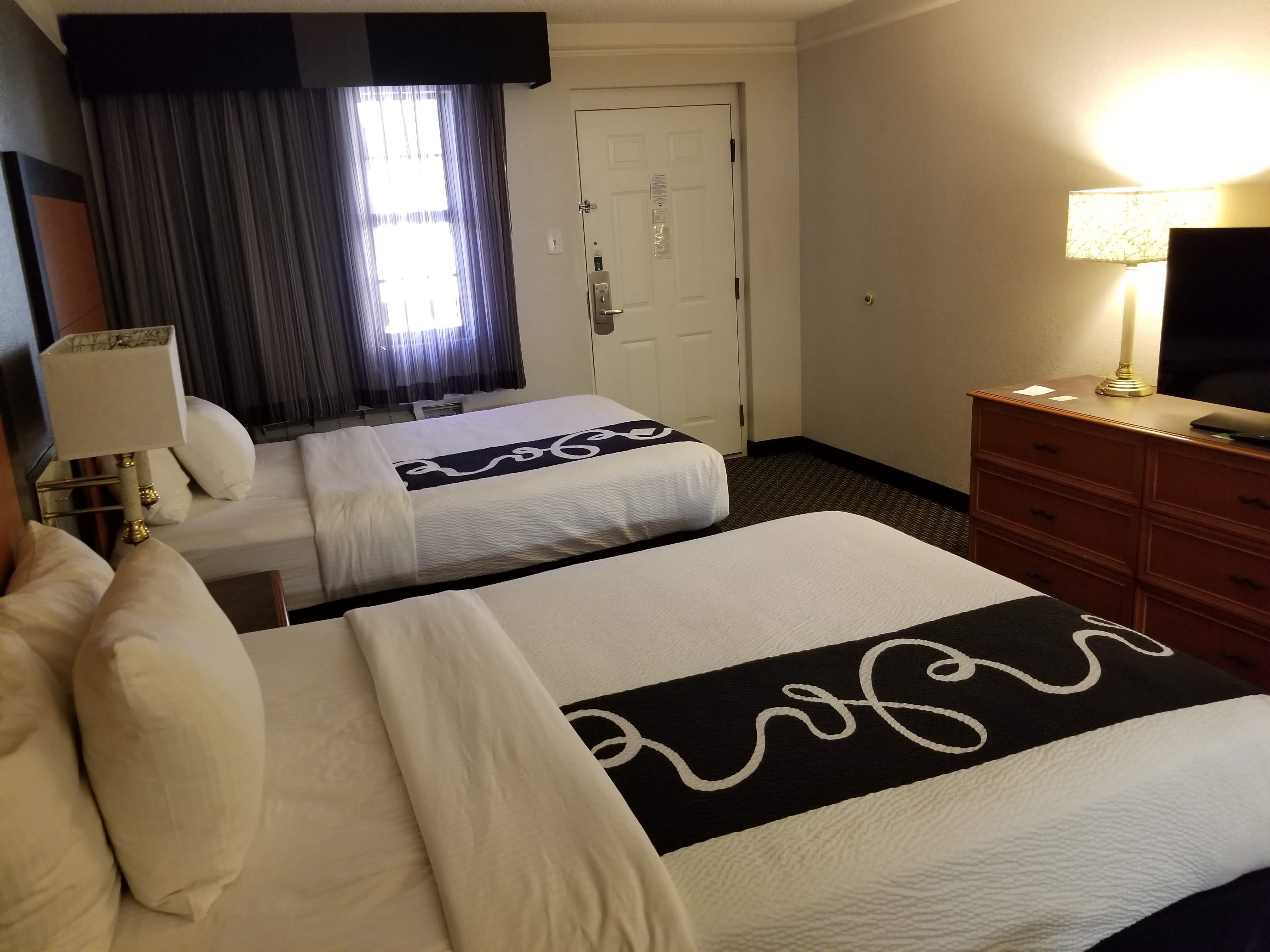 That night, the moon looked totally badass above the Cathedral Basilica of St. Francis of Assisi. I had to take the picture quickly, because you know how these things change in seconds, so it’s not the best shot in the world. Everyone else on that street was admiring this view also. 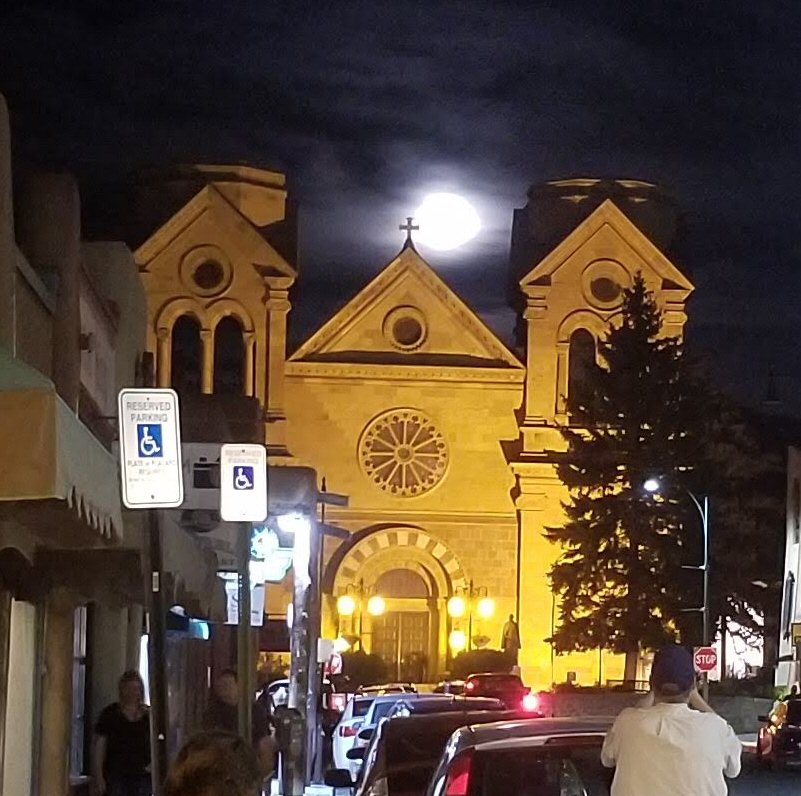 We went to Meow Wolf. Has anyone ever been to Meow Wolf? I need to put it in an AEL, because it was such an interesting, thrilling experience. Highly recommended, and I’d love to go again. Outside Meow Wolf is (or was, at that time) a giant spider sculpture, so of course I had to get a selfie with it. The sun was right in my eyes, so it was a difficult selfie, but here it is: 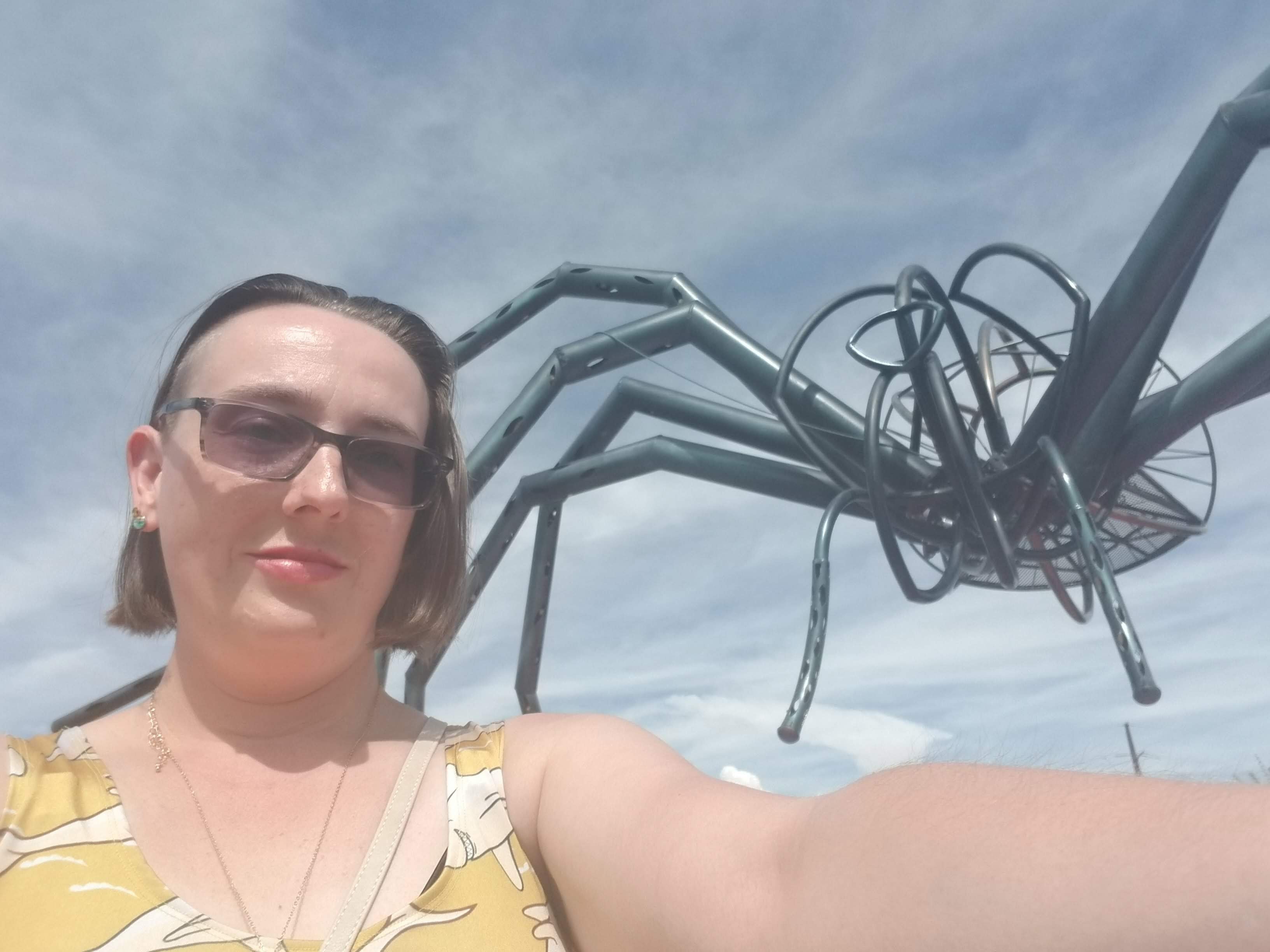 That night, we went to a New Mexican Music Festival, where I fell in love with Micky Cruz and resolved to add all his music I could find to my Awesome Mexican playlist (which subsequently had to be renamed; it’s called Pleasant Latin now). I met him in the lobby during intermission, and he was very nice, and let me get a picture with him. 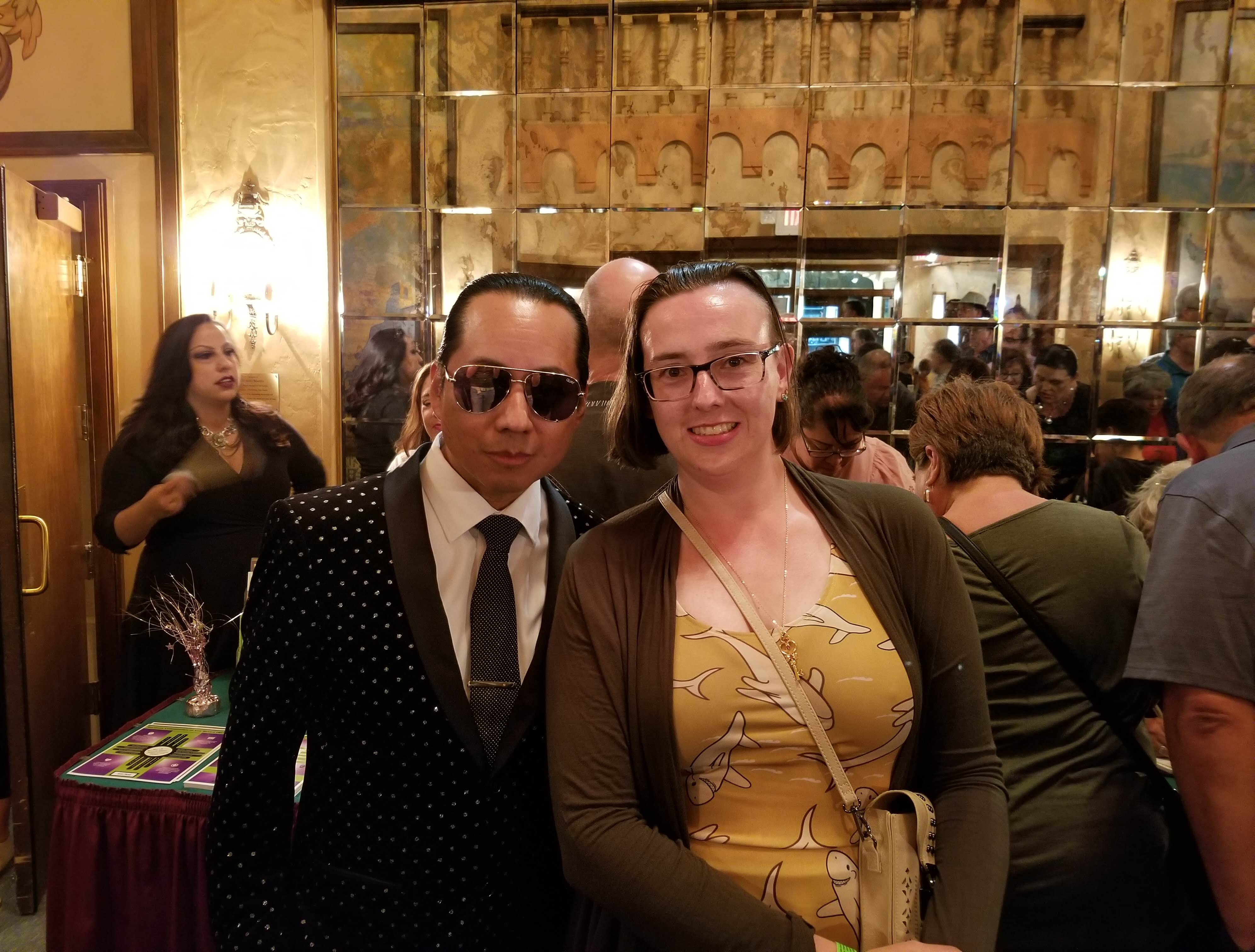 Then it turned out that whoever designed the ladies’ restroom in the place where this concert was kinda forgot they were designing a bathroom and not a ballroom. 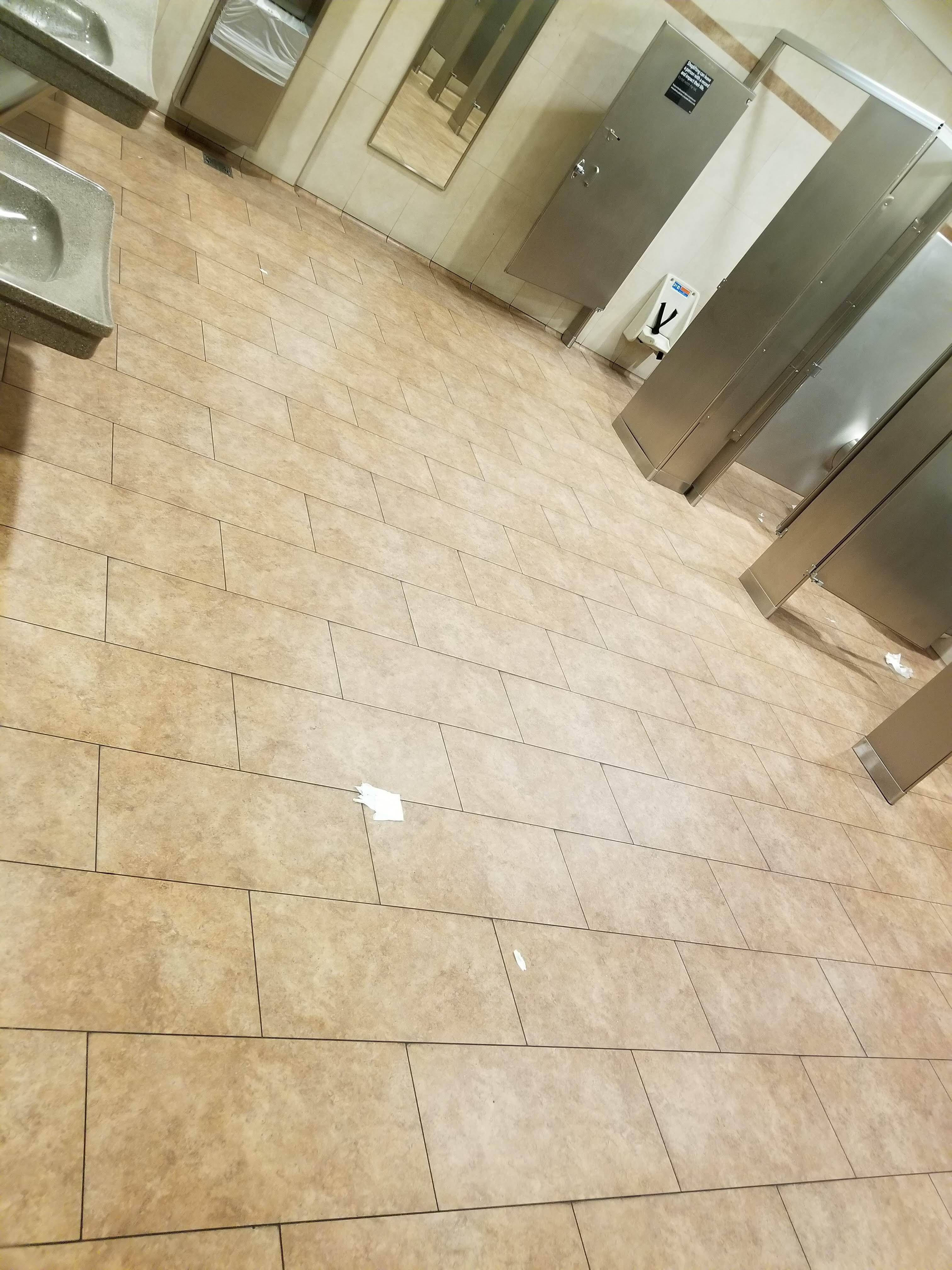 I mean, I love having room to turn around, but was this much floorspace really necessary? And, yes, this is the type of picture I take on vacation.

In my ongoing quest to eliminate the darkness in the corners of my bedroom, I acquired the sweetest little lamps for my shelves. It was the biggest hassle in the world to get them plugged in, because I had to cut holes in the back of the shelves and then use a wire coat hanger to run the power cords through the holes and up the wall to the top where I have a power strip. But once I had succeeded at this monumental task and put all the books back in place (man, I still have so many physical books left :|), it looked absolutely delightful. See! 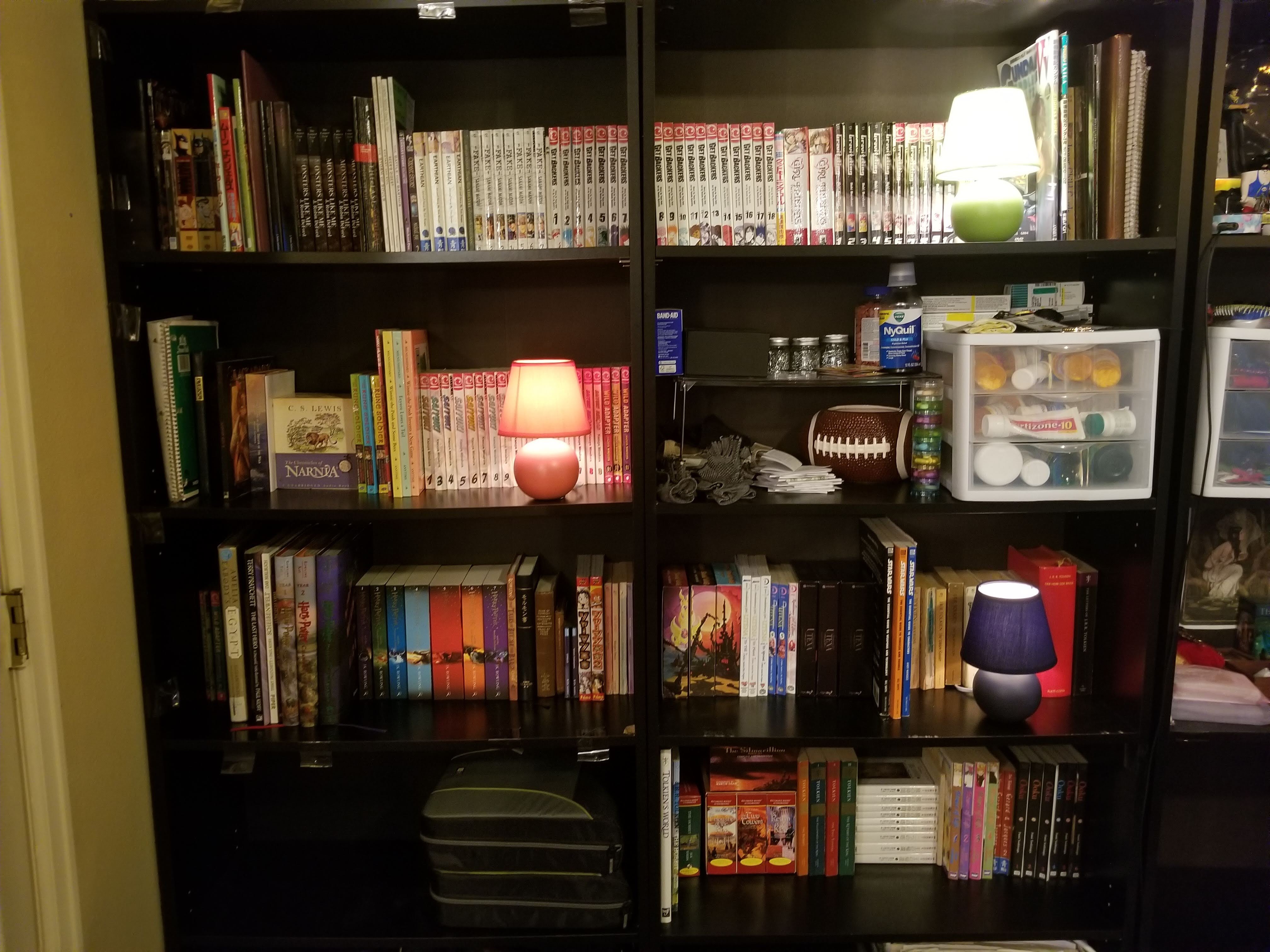 And then that same day, Piper was very cute on my desk chair: 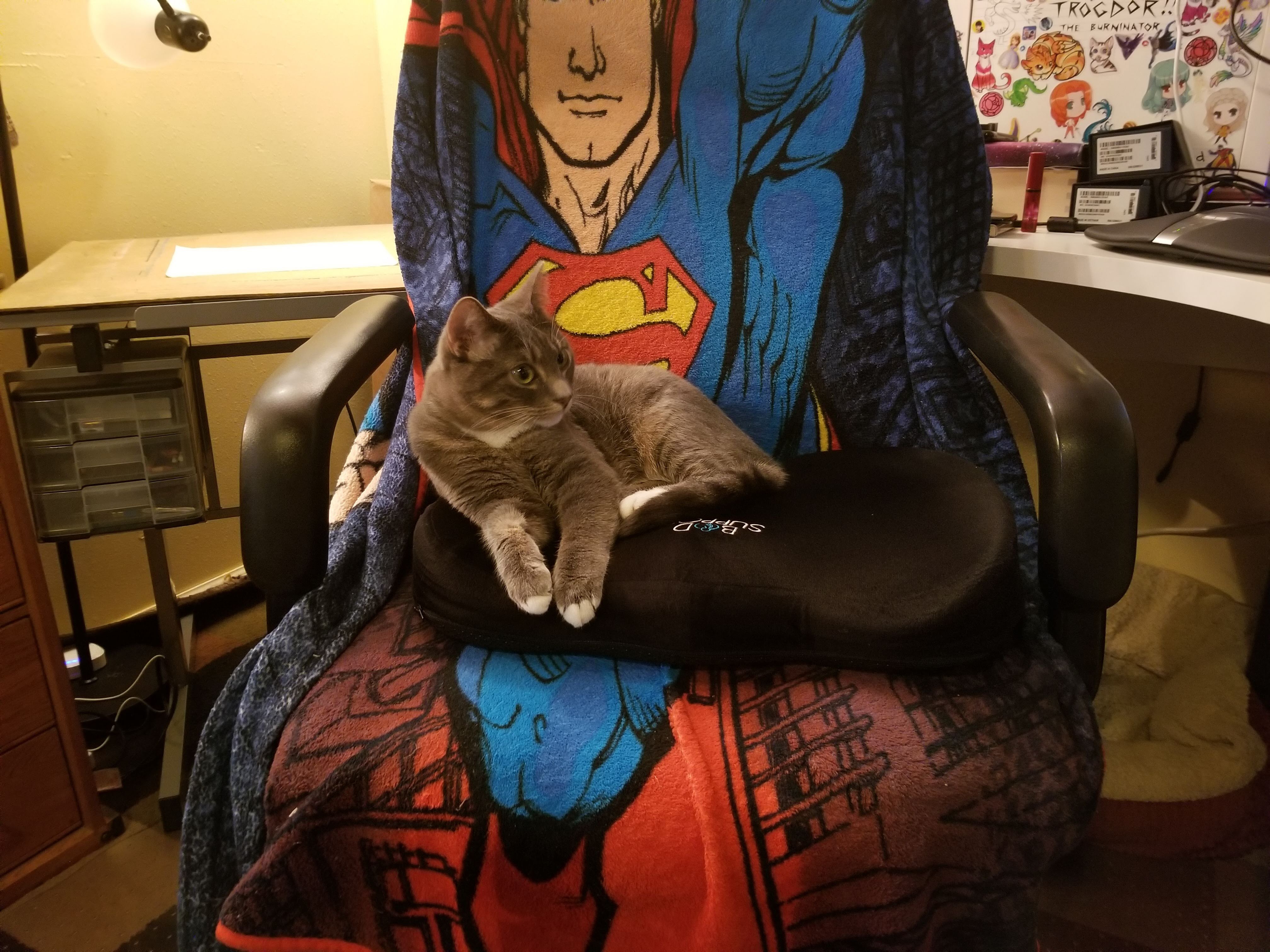 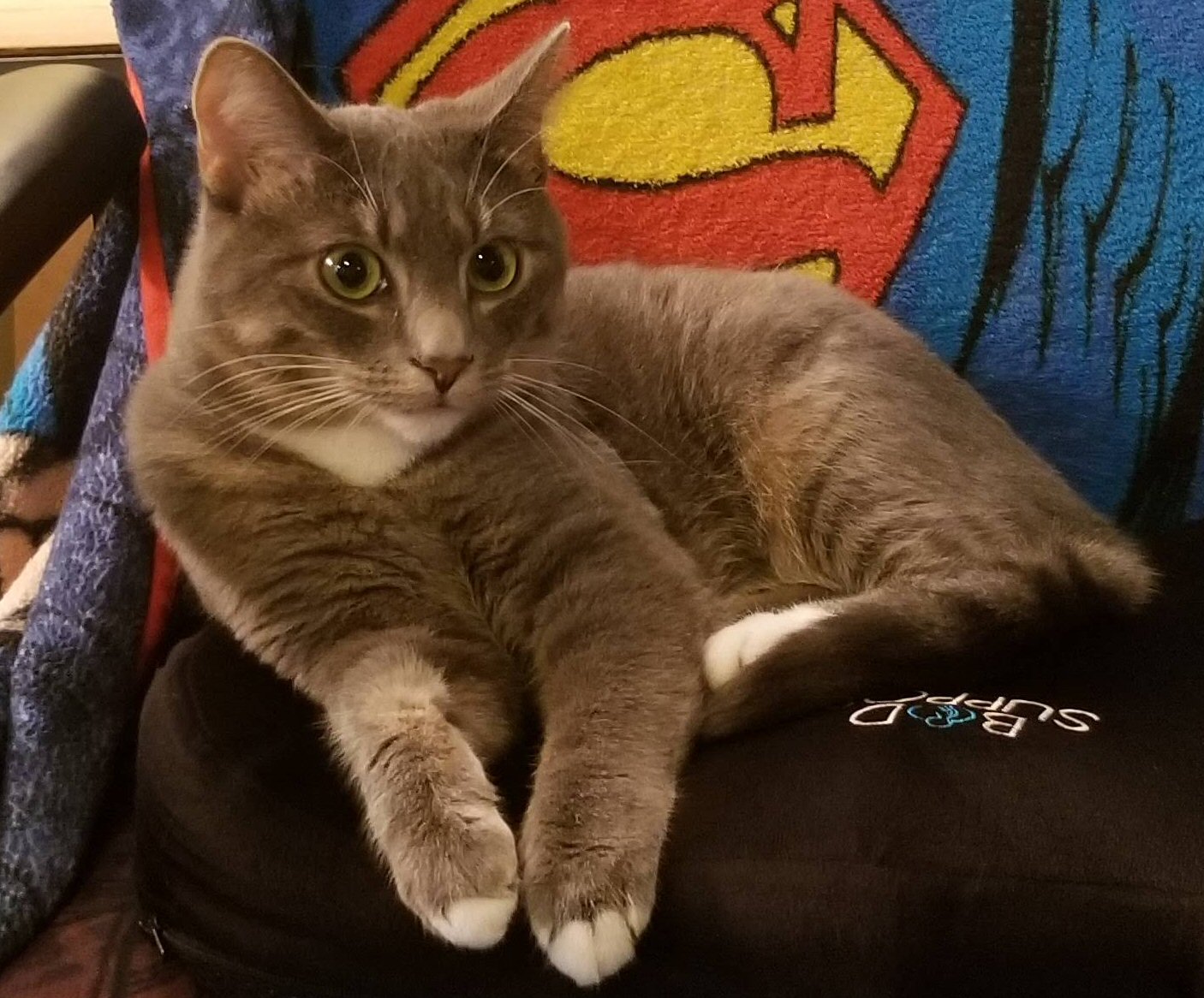