To start out with, I’m trying a new layout for PL’s that should make it easier to link to various section in story author’s notes. Let me know if you like it. I’m not sure yet if I like it.

Moving on: isolation. Because my parents (especially my already infirm mother) are high-risk, we’ve decided to isolate more seriously at my house. My work involves a lot of time spent at grocery stores and not a lot of ability to stay 6 feet away from people, so I won’t be working for a while. This will lead me into financial distress eventually, so I’d like to remind anyone reading this that I have a ko-fi account just in case you’re better off than I am and have a few monies to spare.

Meanwhile, the excellent upside of isolation is that I have tons of time to work on stuff. Endless free time for writing is, of course, my greatest wish, and now it’s granted (albeit in a pretty awful way). So expect plenty of updates from me in the near future!

I’ve also made it my goal to get the last MLM audiobook edits done and get that available during this unprecedented period. Anyone that’s been holding out for the audiobook (I think there are 0 of you), take heart!

TSBTS — Having this every other entry in my working order list has so far been wonderfully effective. I got the story structure better organized and a lot of scenes plotted out individually, and on Monday I wrote a clean 2k words at one sitting. I may have mentioned that this book is top priority, and with this level of progress, I feel it will be done much sooner than I thought.

Of course I want to finish this book because I like it and I’m excited about it and it’s something I’m writing and I like to finish things I’m writing. But it will also be nice to be able to have two books listed on the series site rather than just one. It’s felt pretty pathetic to have a “series” website say for so long, “Only the first book is currently available,” and to have Amazon (among others) list MLM as “TLY book 1” when there’s no TLY book 2 yet. And as I progress through book 2, more specific ideas for the only-generally-plotted-out series pop up, which is excellent.

I got the description of the cover art typed out and sent to sister so she can have lots of time to work on it before the book is actually finished. That way, hopefully, I won’t have to experience the agony I did with the first one of having it ready for publication except for the cover. Not that sister is doing well at the moment; she and her husband own a restaurant, and are limited to delivery and take-out… and they’re in a college town where the college has shut down for the pandemic, robbing them of most of their business anyway. Booo.

On the subject of art for the series, I haven’t commissioned anyone to draw any of the characters for a while, mostly because I was discouraged by the complete lack of attention given to MLM and the series site. But lately I’ve seen a lot of “emergency pandemic commissions” posts on pillowfort, and I’m trying to support people by commissioning them (paying with credit card, which is a very bad financial policy, but shut up). And a couple of them are drawing some of the TLY characters for me, which is very exciting. That’ll provide some updates for the site and some proof that I’m still alive, at the very least, and I’ll get to put a few more pictures on my wall of TLY arts.

I’ve wanted to write a short story or two connected to MLM so as to have not only the aforementioned updates for the site but also some additional extra content for anyone that’s read the book and visits the site. However, I haven’t had any particular ideas for such stories yet. I should probably sit down and brainstorm, since that’s really something I’d like to do, but it would also be nice if a reader had a question for me that I could answer in short story form. We’ll see.

The Valley — I got this one completely plotted out, and started on individual scenes. No title yet, but by now I’m revolving some in my head. The words “the valley” may actually figure in, but I could go with something else entirely. I’m still using Inkarnate, by the way, and still loving it, and I made a nice little map of the valley. It’s always convenient to be able to work off a map, even if I can never get them to scale.

My original plan was to have the entire book narrated by only one character. I definitely have a good handle on that character. However, I’ve rethought this, and decided there will be four POV characters — the main two, and to a lesser extent the two secondaries. I had thought the second main character, having some mystery about them, might give things away in narration from their perspective; but I realized they probably aren’t going to want to think about all that stuff much, and the limited references may actually enhance the mystery.

Among the poor-financial-decisions commissions I’ve had done recently were pictures of these two main characters by Alex Coggon, which you can see here: 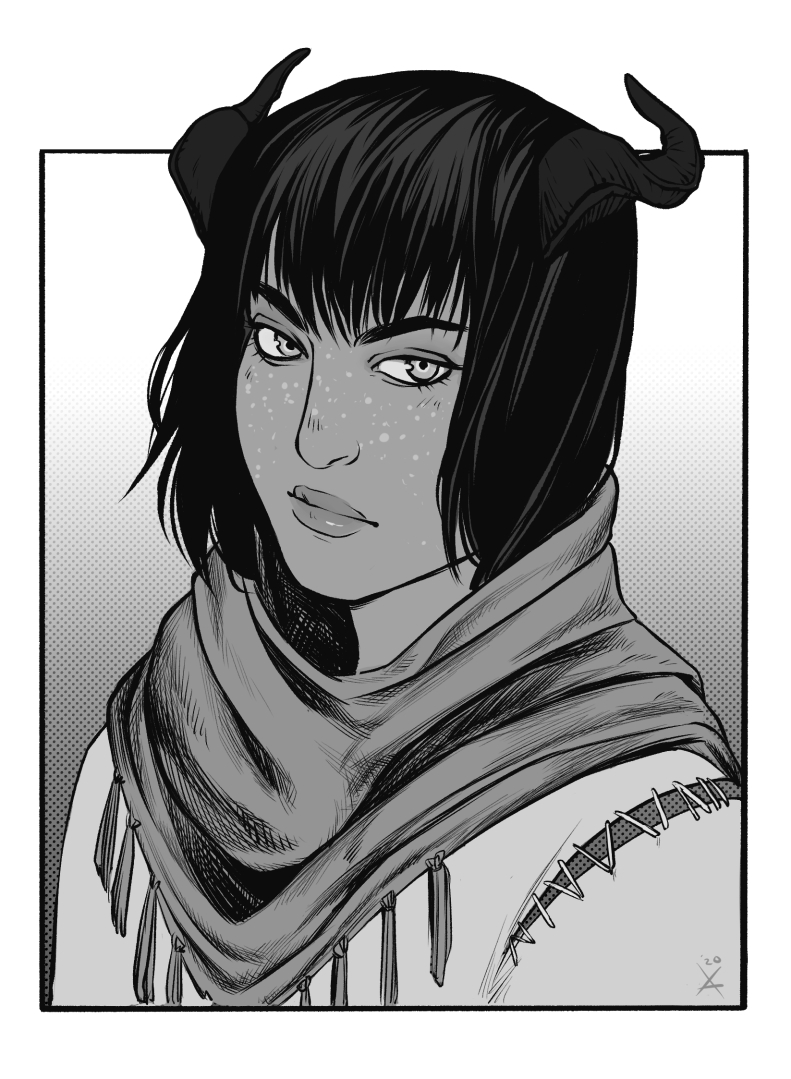 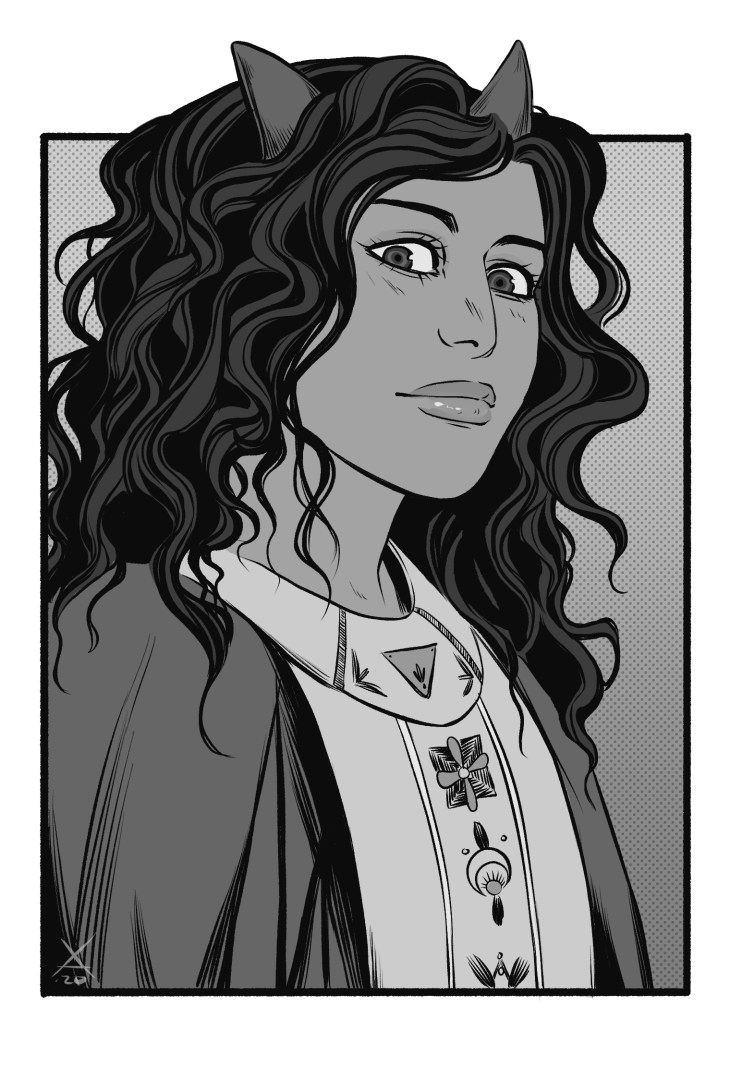 These aren’t entirely accurate; Sarthyn (first image/on the left) has darker skin, Eltoba (second/on the right) has curlier hair, and both of them have smaller horns. But I still love looking at them when I’m working on this book. In fact, since they’re purely for my own amusement and this book is still in the planning stages, I normally wouldn’t post them publicly at all… but I figure at this point in the world, everyone needs to see as much beautiful art as they can, and I also wanted to plug for Ms. Coggon. (Do we still say that? Do we still “plug” for people?)

I started drawing Sarthyn myself (they’re the one I have the best hold on the characterization of), but that was before I discovered the drawing program on my phone can do layers; so the picture wasn’t going very well, and I gave it up XD

Aku Soku Zan(za) — As I mentioned before, this latest scene was previously the first rather than the second meeting between Tokio and Sano after they slept together. And, yes, this Tokio does have a problem with putting off difficult conversations, but it was still unbelievably silly, I think, to have had her put it off that far. (Of course the timeframe has expanded a bit in the rewrite, so it wasn’t actually as long as it would have been here, but still.)

Of course the downside to its being the second conversation is that the first conversation wasn’t actually described. But since things are little less awkward between them than they were the first time, I kinda feel like this spares the reader multiple uncomfortable scenes. I want this to progress more naturally than it did before, but I don’t want to put the reader through the entirety of what the two characters are going through; that’s just tedious.

Sano is still looking at this very one-sidedly — very self-centeredly. He doesn’t realize at all how awkward the meeting is for Tokio, not just for him, or how she’s using the newspaper as an excuse not to look at him or try to come up with conversational topics of her own beyond what she really wanted to know. Of course part of that is that she hasn’t shared with him (because of the rift between them) the reasons she felt sleeping with him was a bad decision, so Sano still thinks most of the blame for that rests on him. But he also hasn’t grasped her far more obvious feminism, why it’s important to her and why it’s necessary for society, and that’s just him not paying attention. He would have realized immediately what she’s reacting to in the paper if he’d properly noticed that about her. They still have a long way to go.

So do Sano and Saitou, naturally, but I think I’m giving good little hints at how much Saitou already means to Sano even if he hasn’t developed or realized any deeper interest. Sano tends to fixate, and that makes this kind of little hint a lot easier to drop!

Red Onion — I mentioned above that I hadn’t realized for a while that the program I use to draw on my phone (Autodesk SketchBook) can do layers. Once I noticed that, I got very excited and decided to draw something with layers to play with the function.

Lately, every time I’ve been shopping produce, I’ve gotten pretty starry-eyed looking at the onions. Onions are just so gorgeous! White onions are probably the prettiest, but red onions are a close second. And I’ve been longing to draw thems. So….. I did. 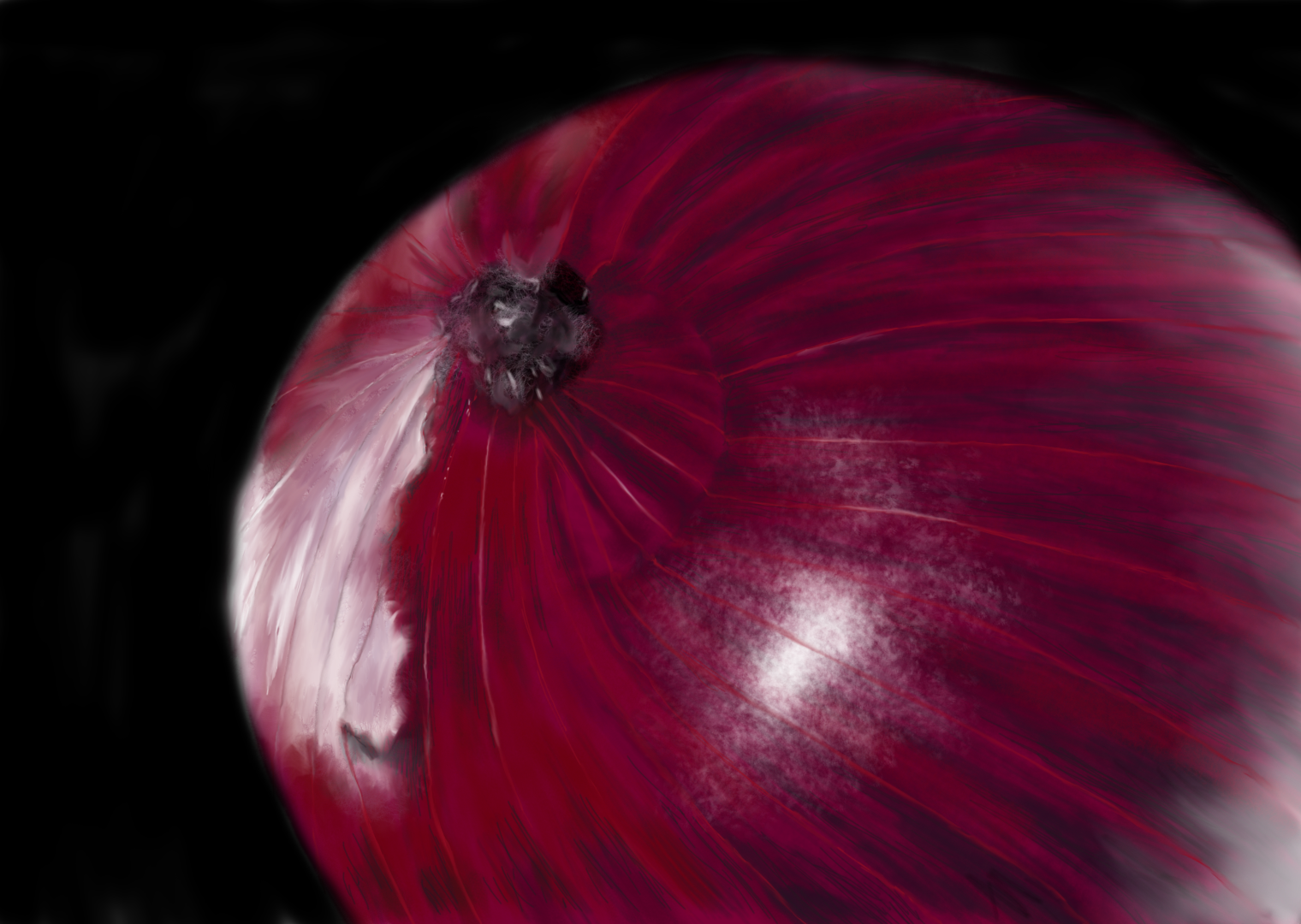 Not bad for my first proper use of a new program, eh? I’m pretty happy with it. Next I have a great desire to draw a fruit bowl, since so much fruit is so beautiful too. But I’m actually working on a fanart in that program now; maybe sometime I’ll have a preview, but not right now.

When brother saw the onion, he said that was a perfect choice for my first use of layers in SketchBook. He suggested next I should draw Shrek. (Which is… not the fanart I’m working on.)