I forget whether I ever documented my glowing shoes. 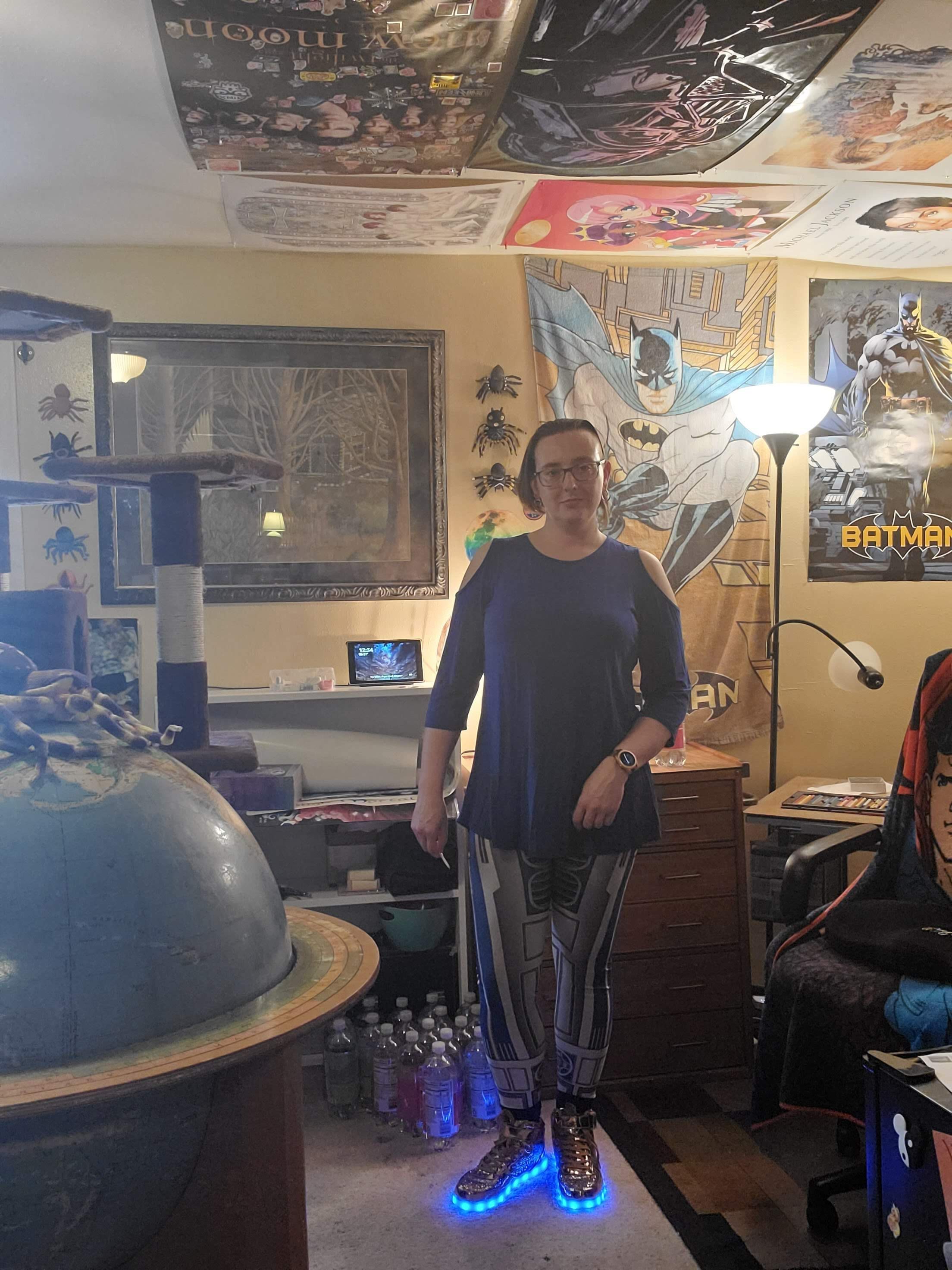 I probably have older pictures of thems that I’ll post retroactively. While the kids were here over Christmas, their other grandma bought most of them light-up shoes; and I got to thinking, why can’t I have light-up shoes? So I looked on Amazon, and they were very easy to find. They’re delightful. Even after the four hours or so of battery wears off, their bright gold is still fantastic. On this particular day, I thought it added a C-3PO touch to my R2-D2 outfit. And, man, do they ever turn heads.

Actually that day, I thought I looked pretty cute in general. This selfie didn’t disappoint me nearly as much as most of them do: 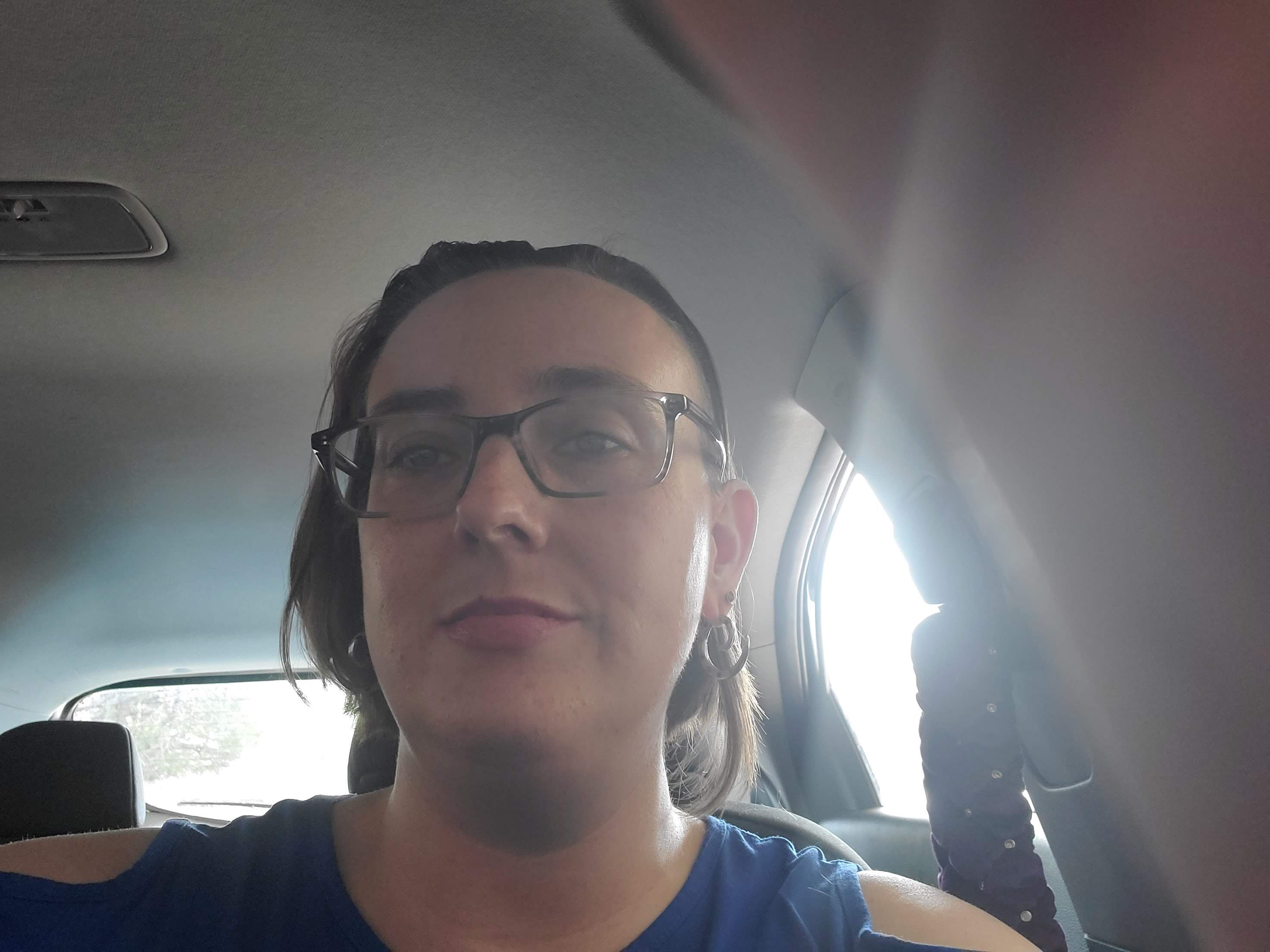 I have some concealer to cover up my endless acne; imagine, me wearing makeup! It works pretty well, but often I’m just too lazy to put it on. But this day I did.

Little loves on the bed with me: 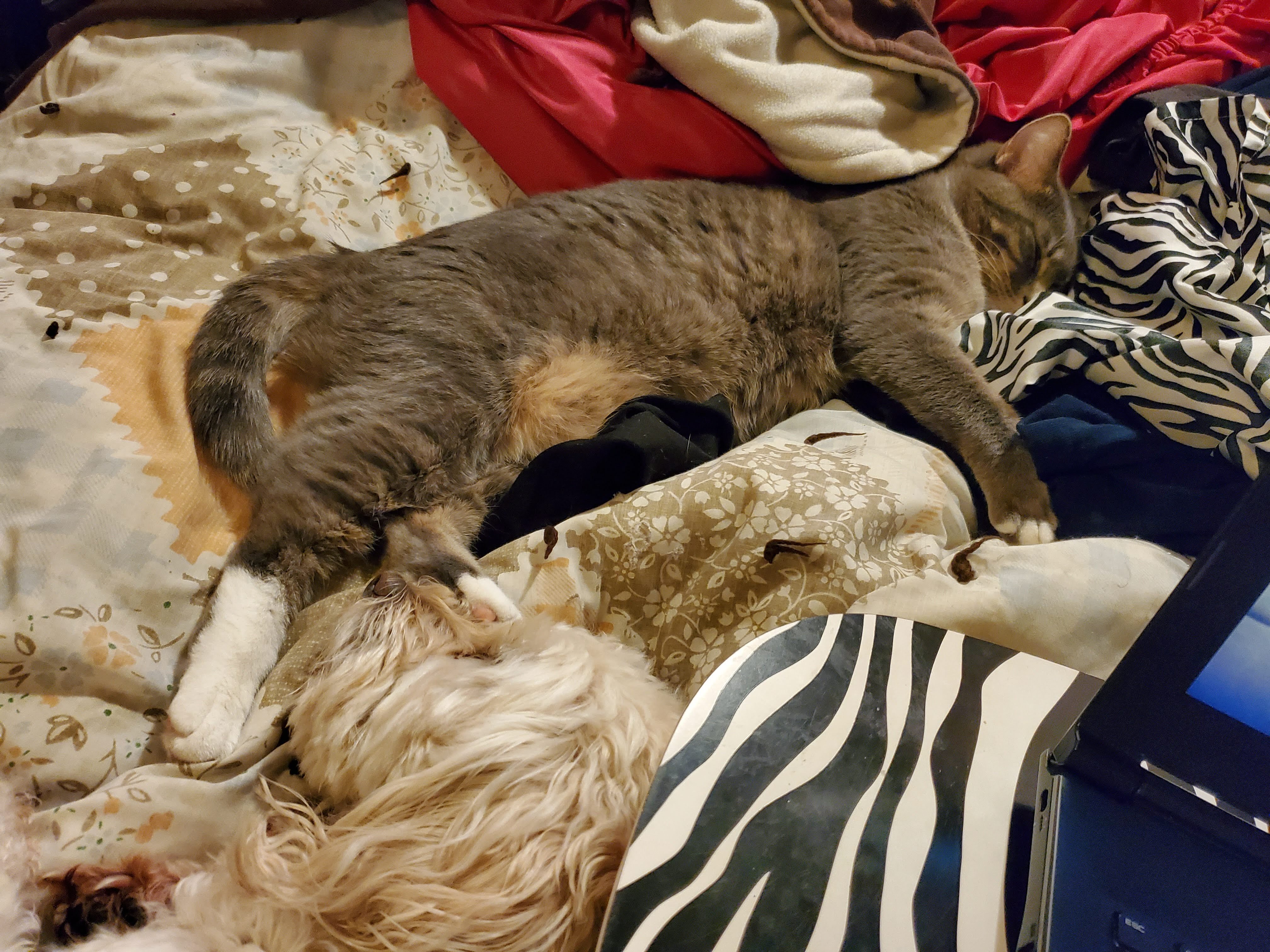 A while back, I delivered food to someone at The Great Wolf Lodge. I had no idea such a thing existed, and I was fascinated by the place. I discovered that a day pass to swim didn’t cost much, so I decided to go. Brother would have gone with me, but the day passes sold out before he had a chance to get one, so I went alone. I bought a new swimsuit just for this.

In the wave pool, I saw a pre-teen girl wearing the same swimsuit, and we had a brief laugh about it together. It’s so damn cute. 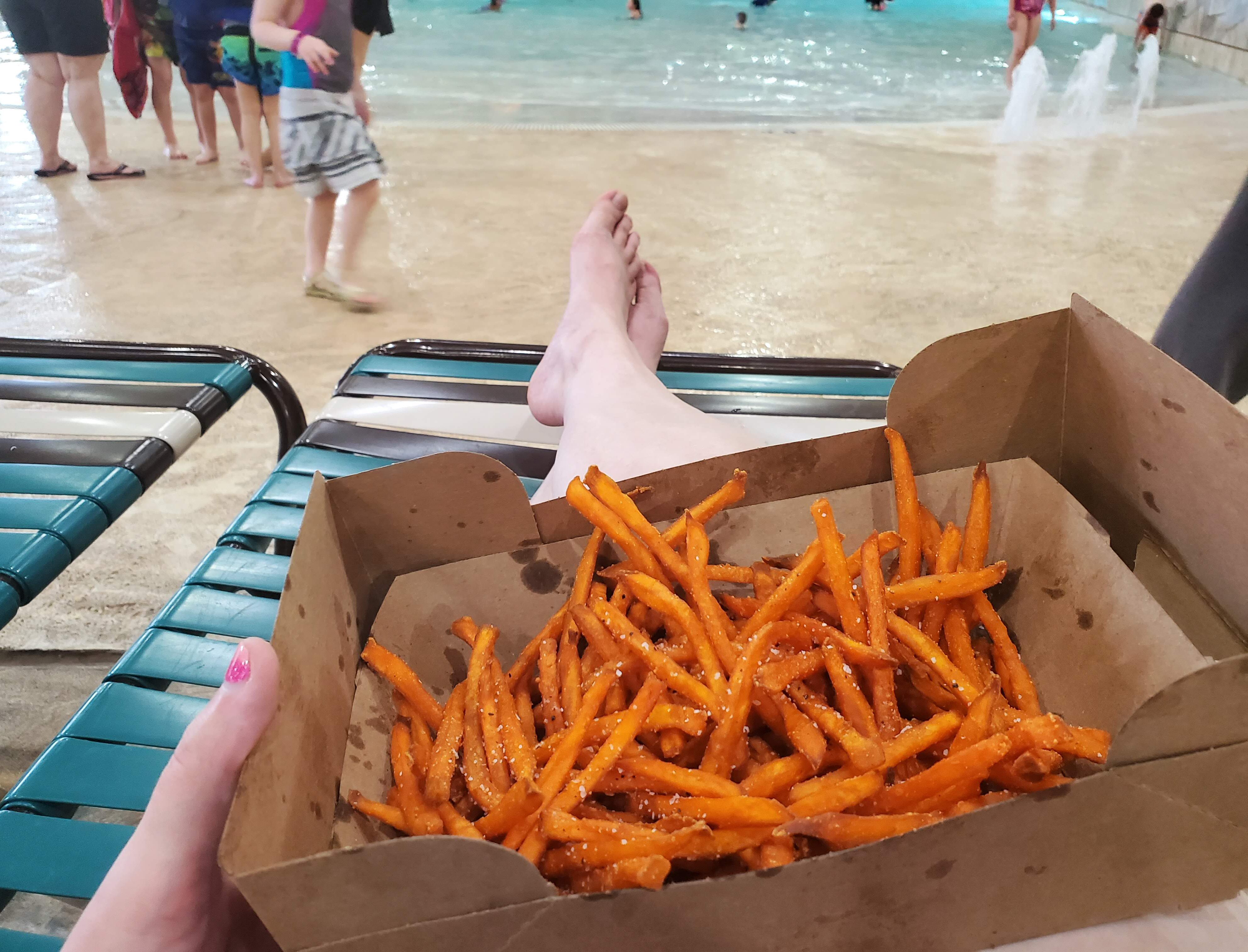 I ate some sweet potato fries and drank some diet vanilla ginger ale. It was a really fun time. I had looked forward to swimming, because I thought it was a type of exercise my body might tolerate. And at the time, it was great; I could swim with little pain. However, the next day I was laid up; I think I overdid it. I may try swimming again someday for a lesser amount of time, but obviously not right now.

Also, it was super cool to be able to text from inside a swimming pool. I love my smart watch.

And then the craziness started. I’m sure anyone that’s been to a grocery store lately has seen sights like these, so this will be nothing new. But I wanted to document the state of things for future reference. Here are aisles and sections at Target for toilet paper, bread, eggs, paper towels, more toilet paper (different Target), bananas, meat, more paper towels, pasta sauce, and potatoes: 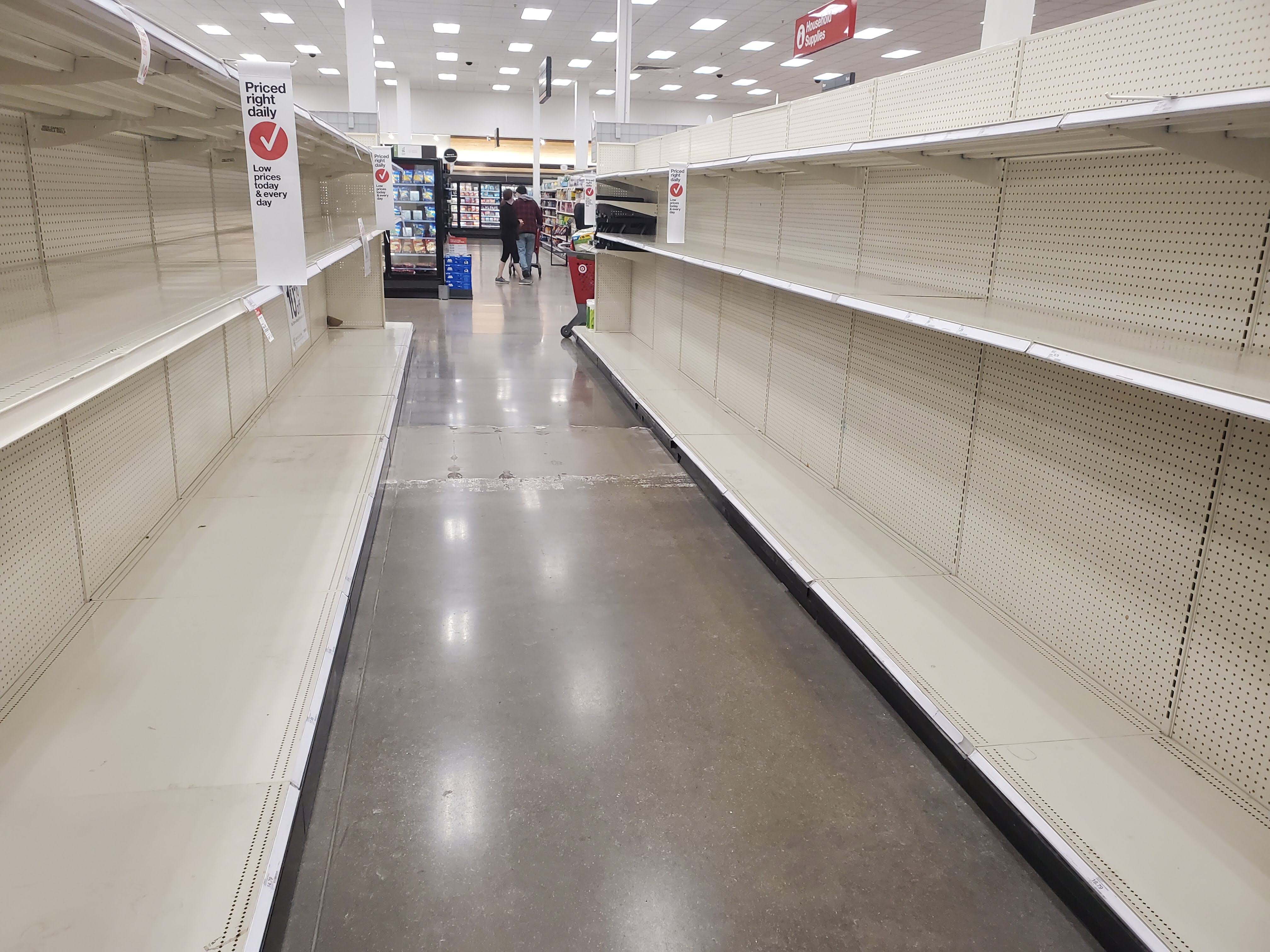 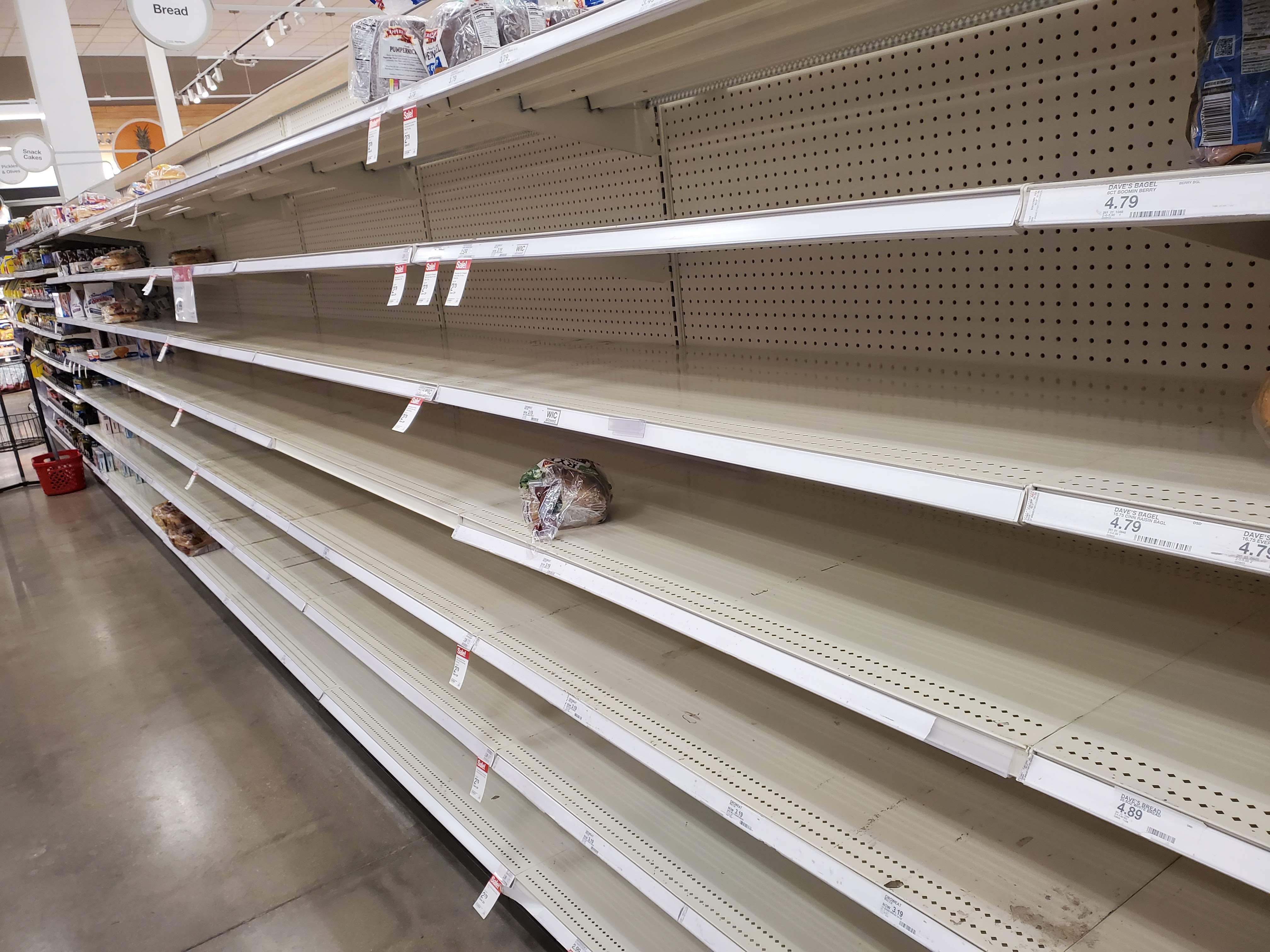 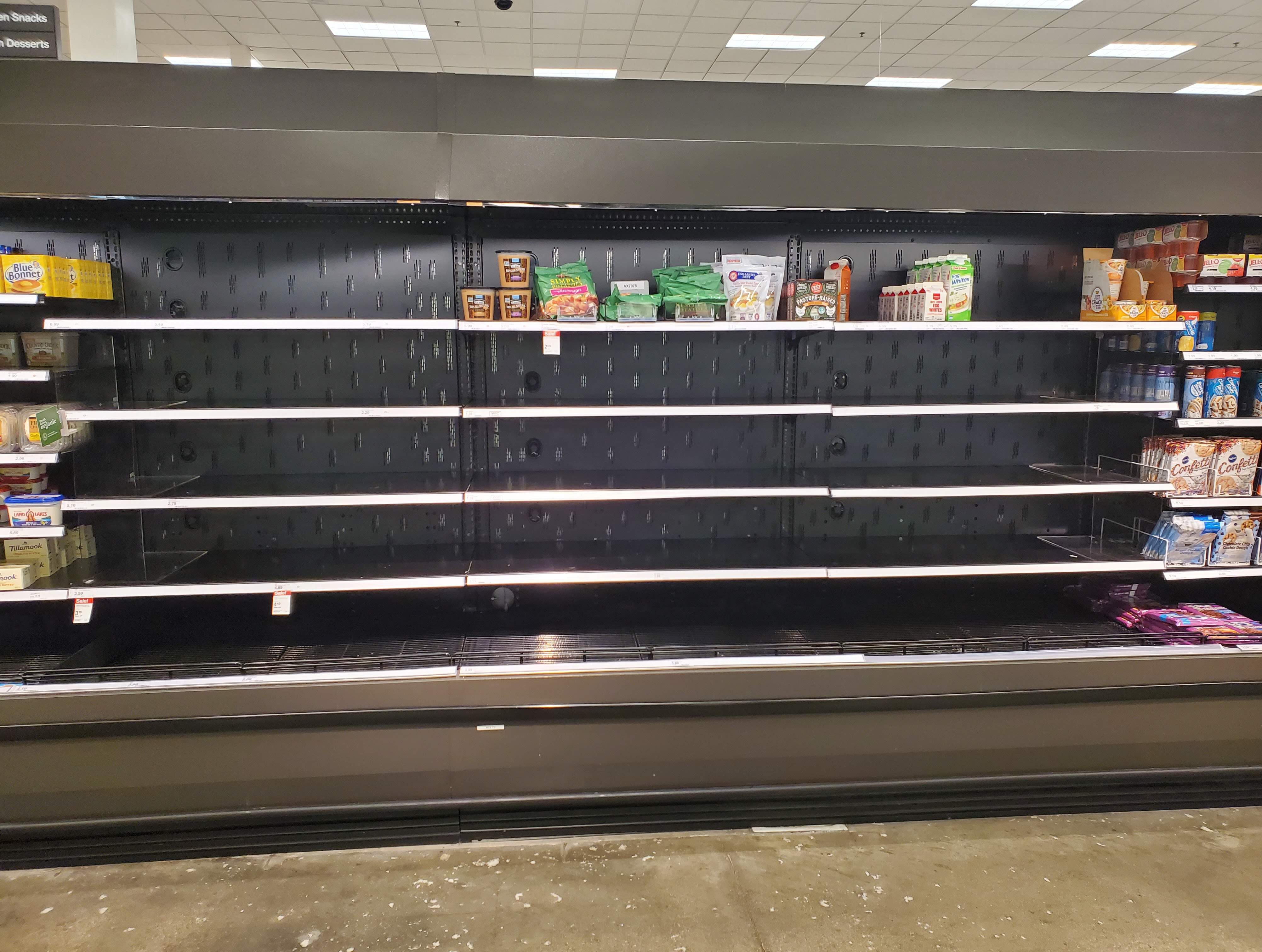 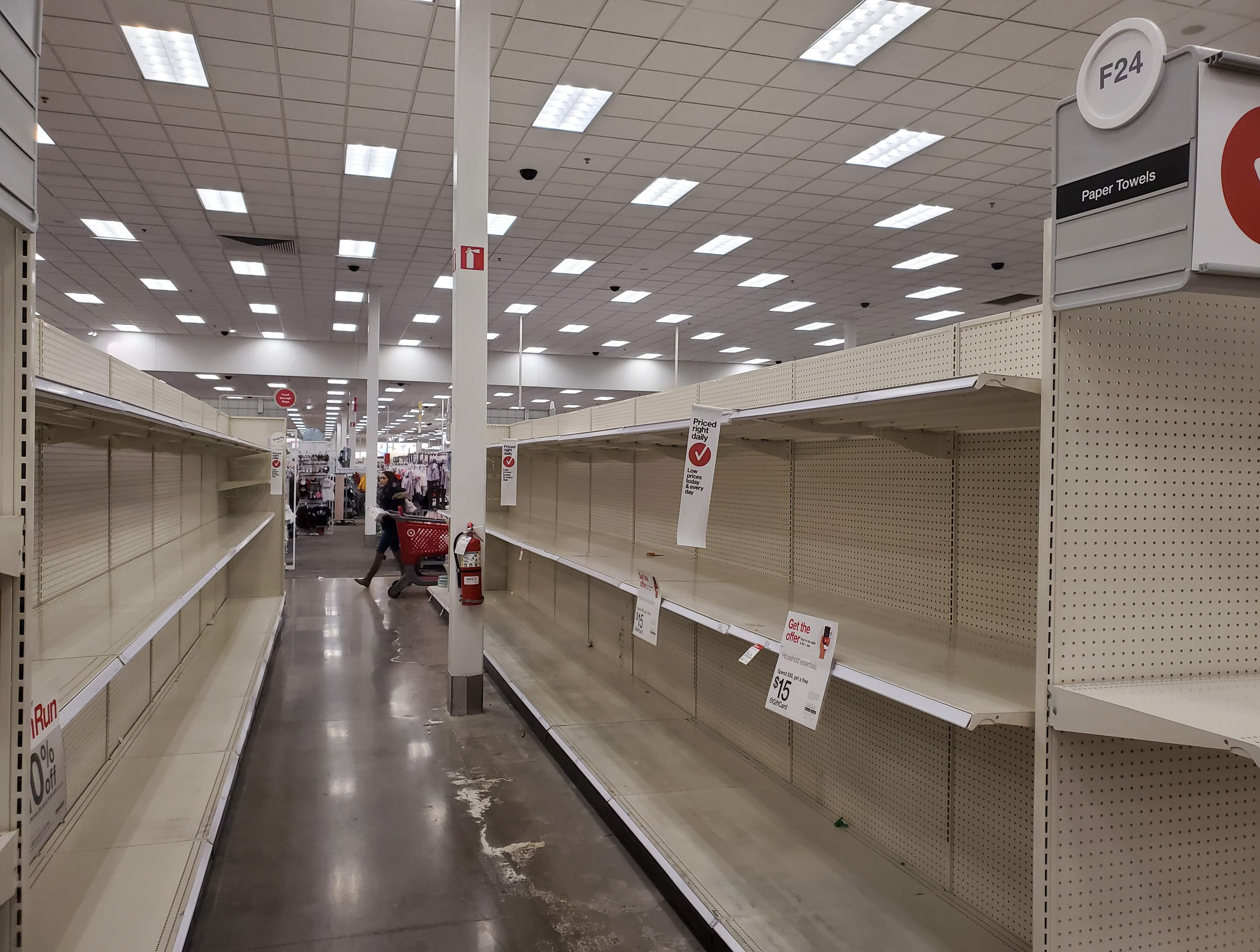 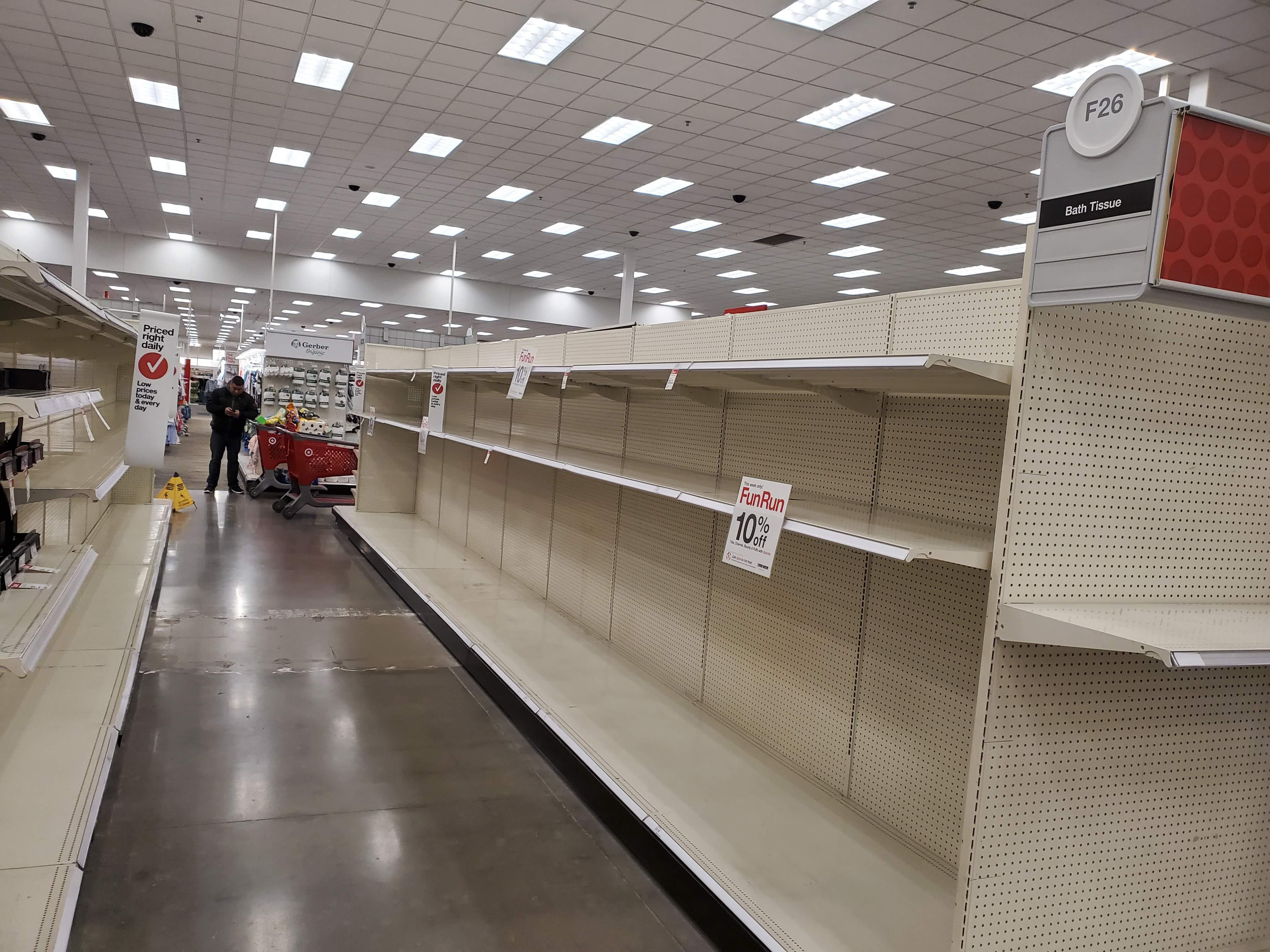 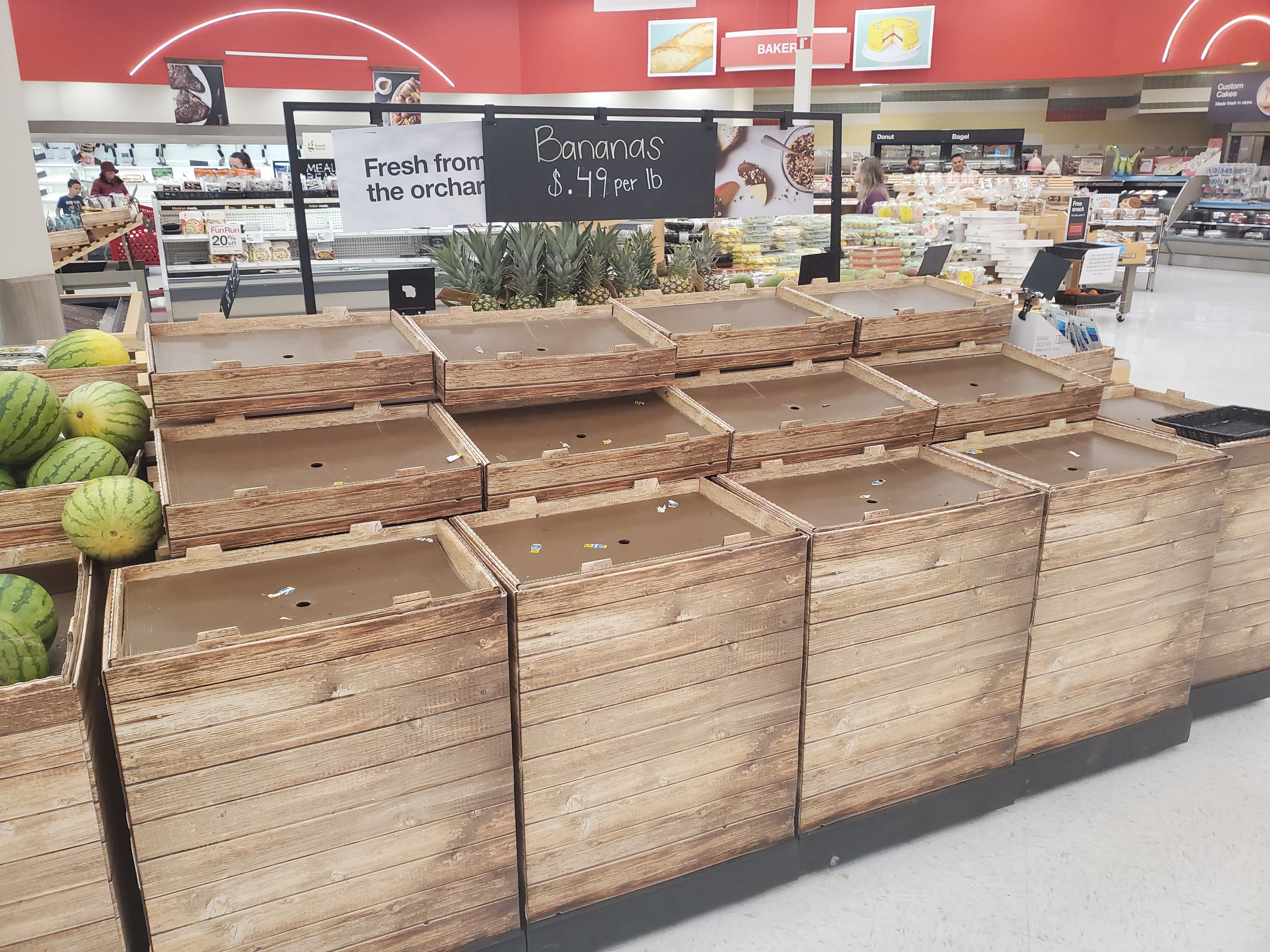 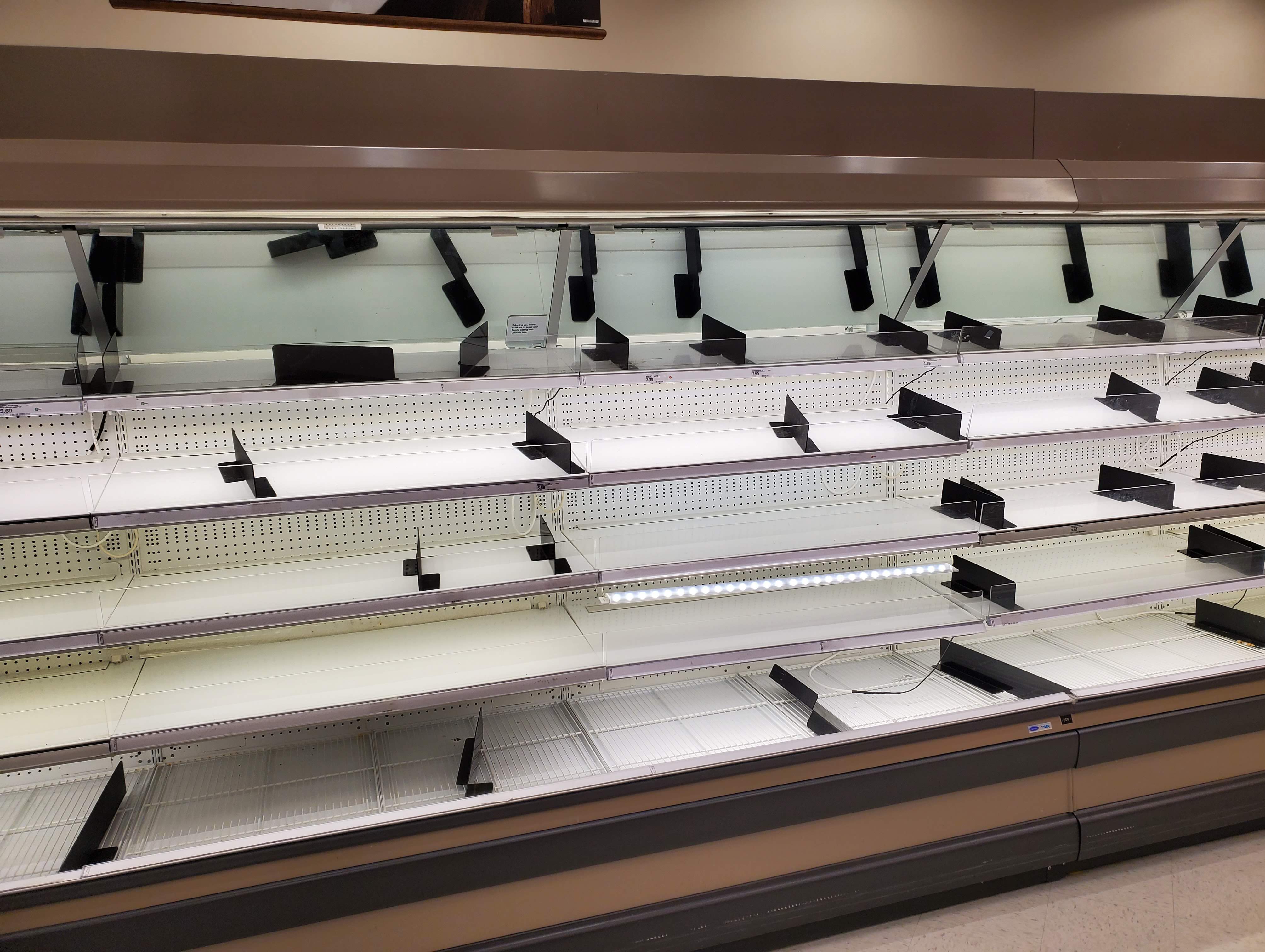 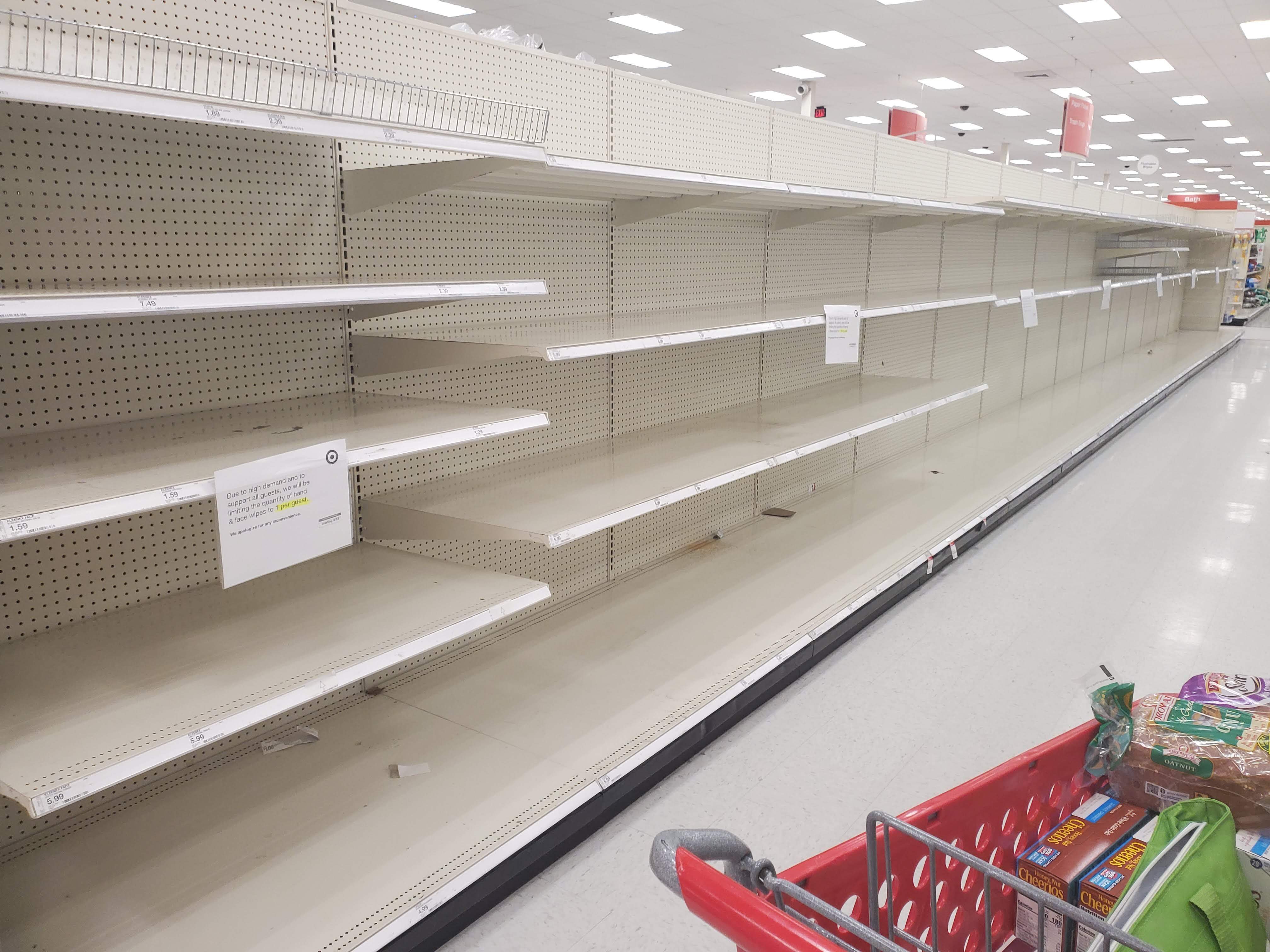 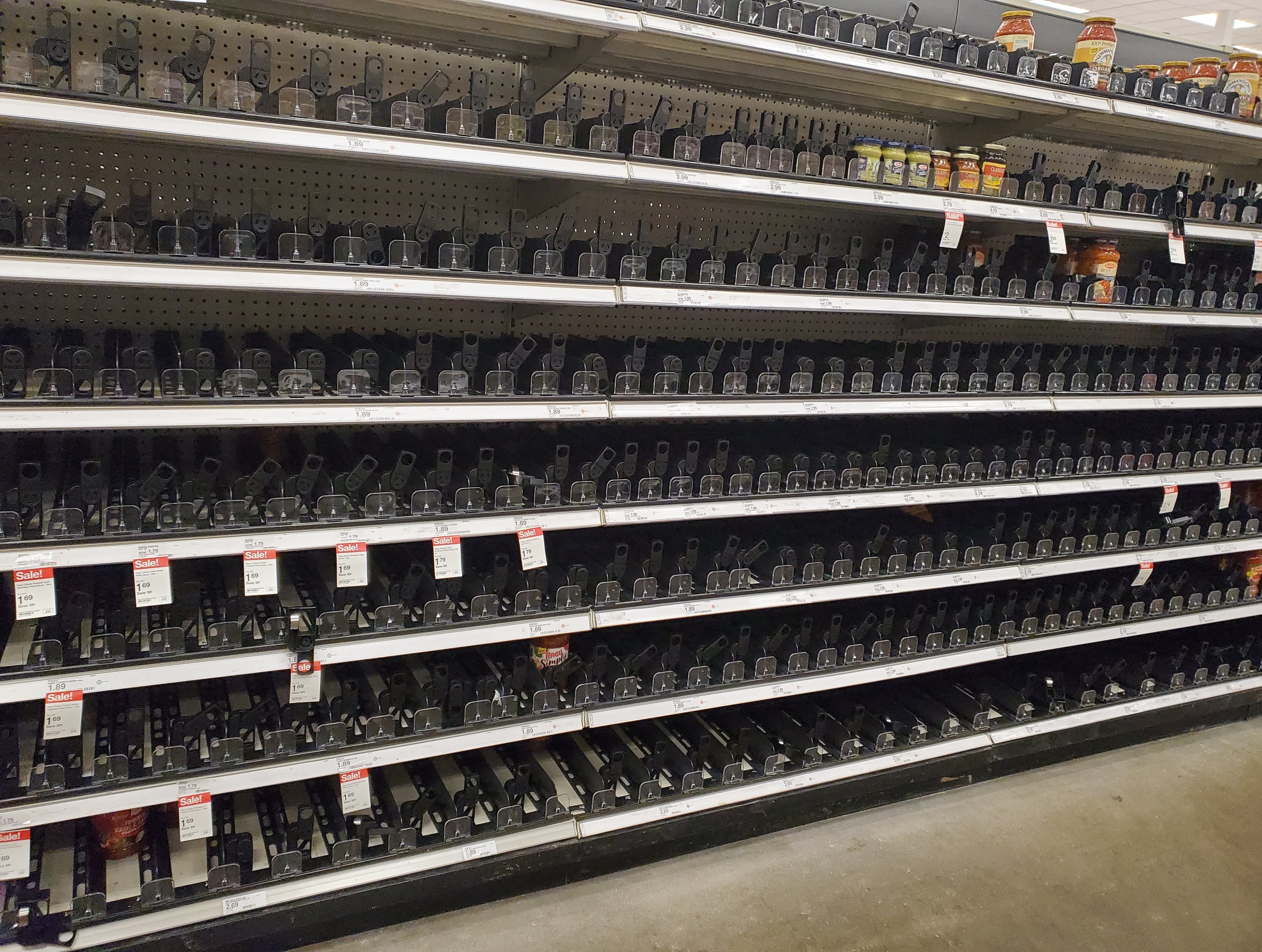 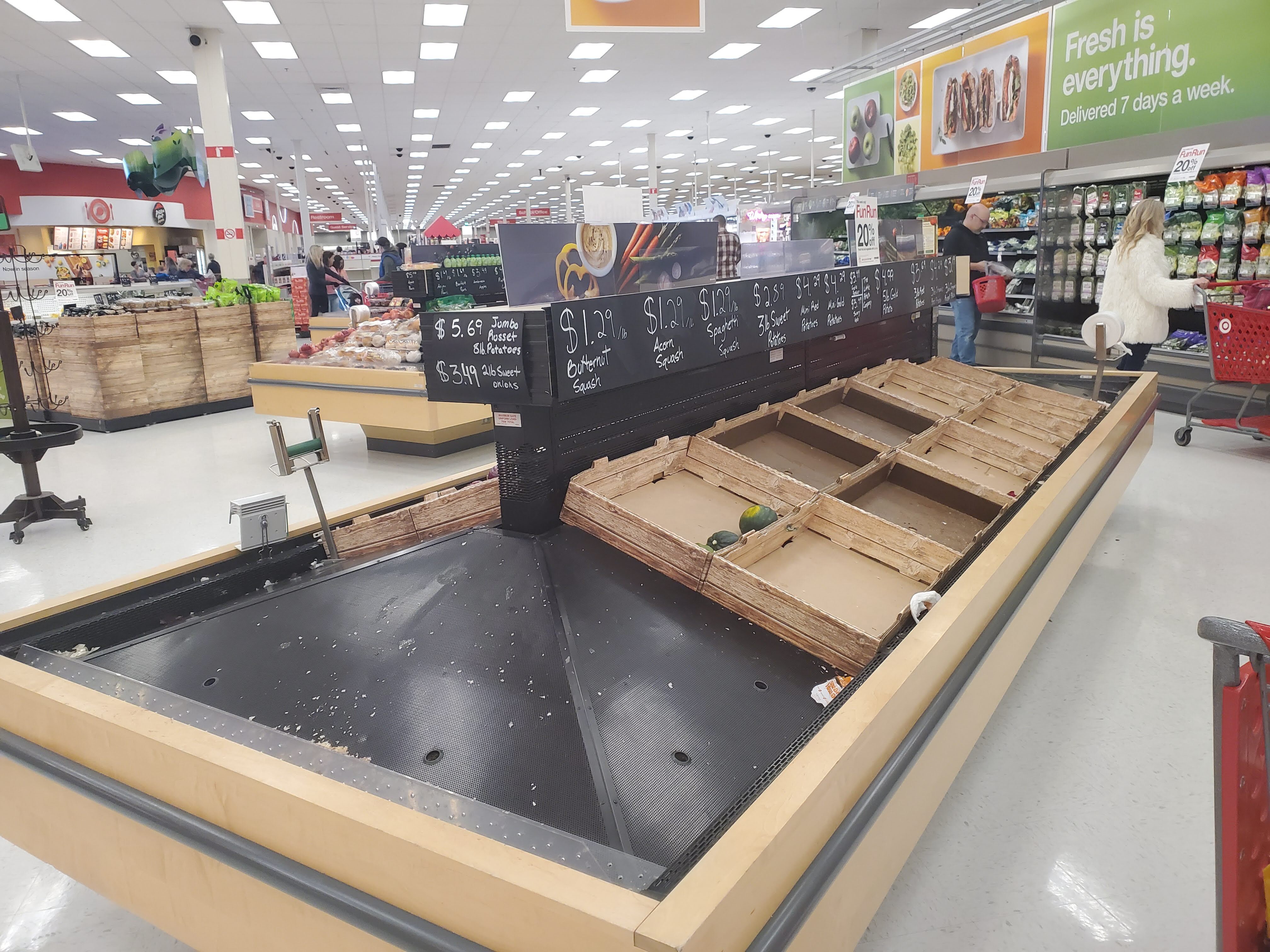 Less freakishly, I saw this edited can of bubly, and I laughed and laughed: 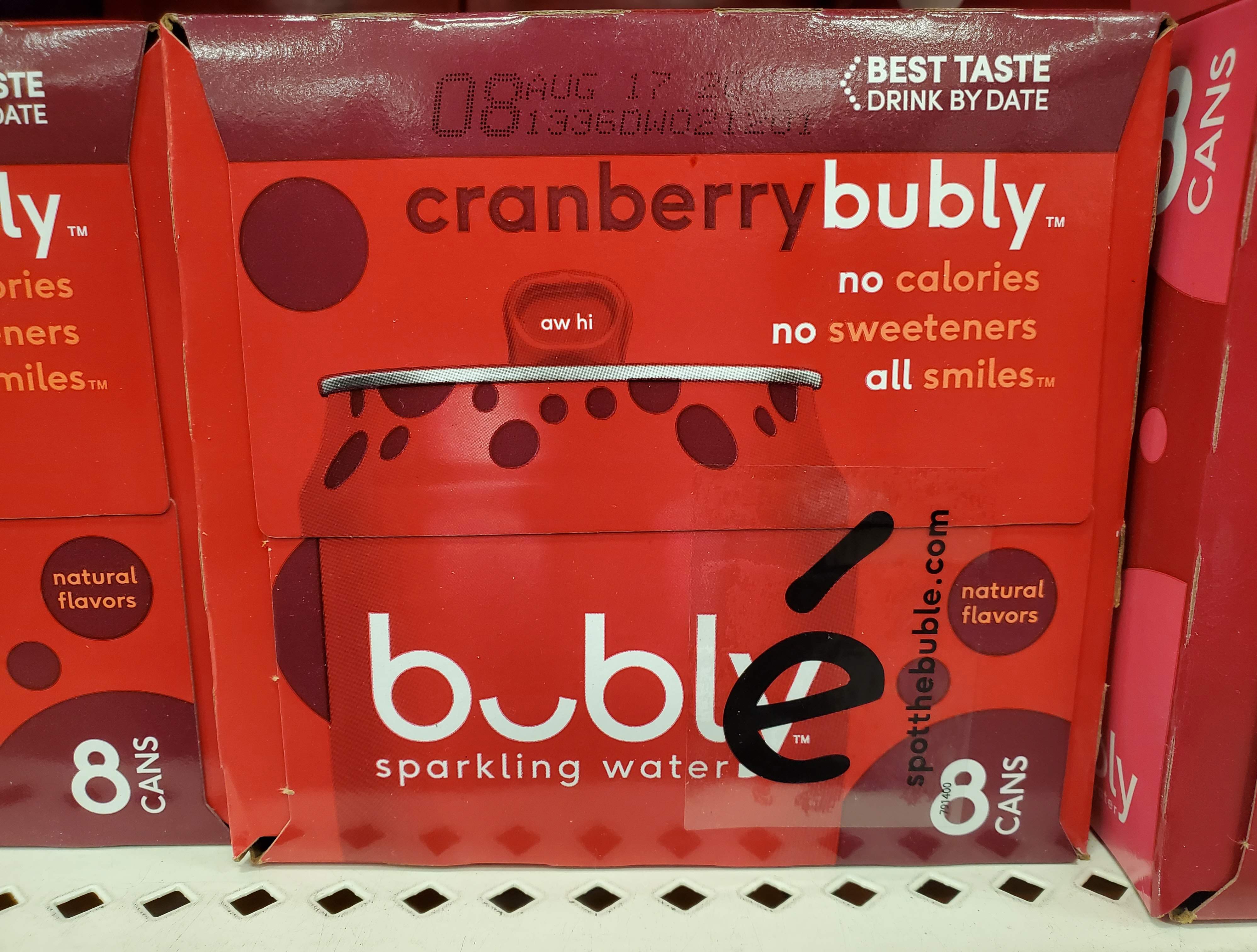 Also, this screenshot of the Shipt shopper app and its designation of the size of watermelon I needed:

Some adorableness to start this day: 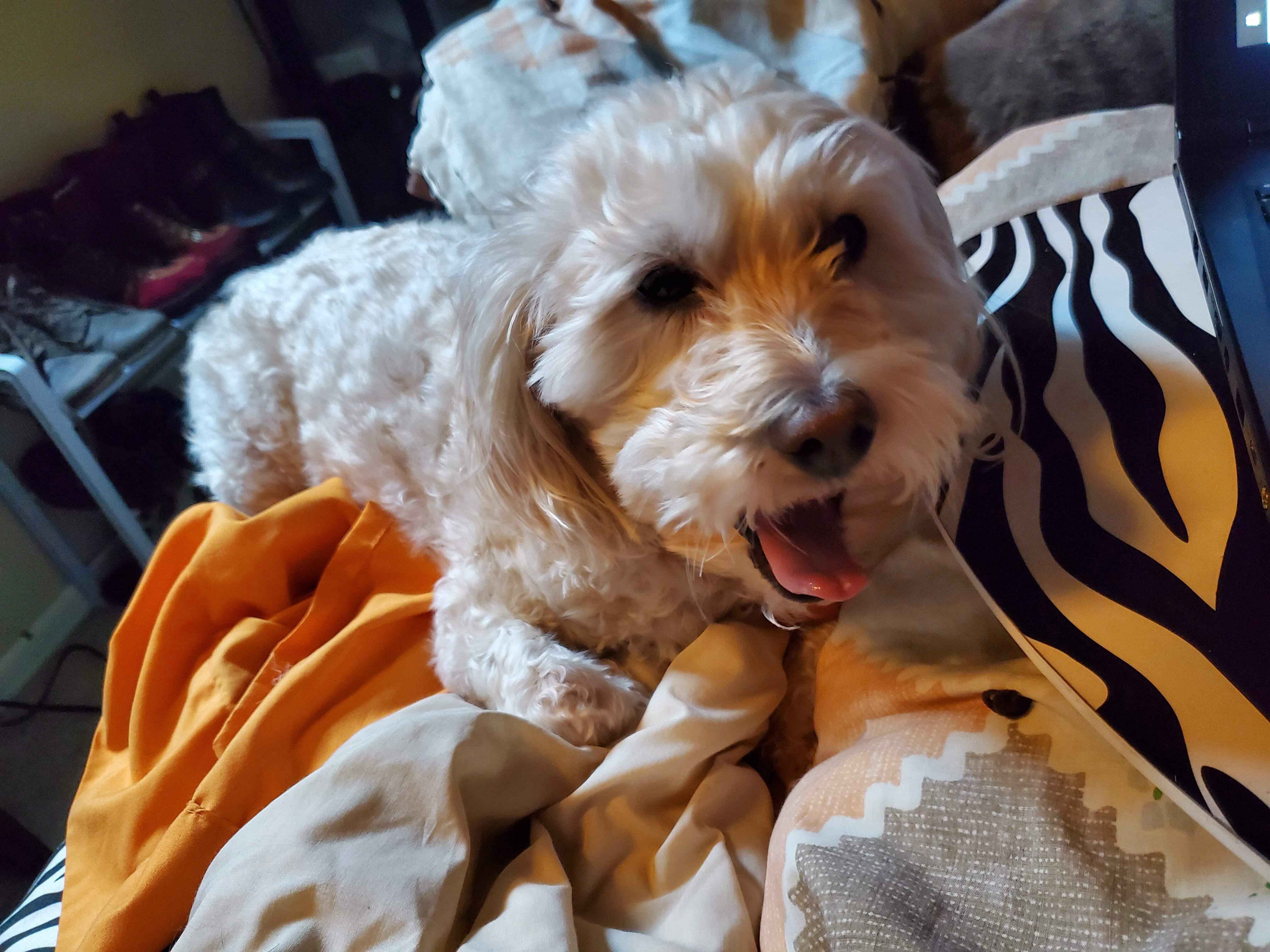 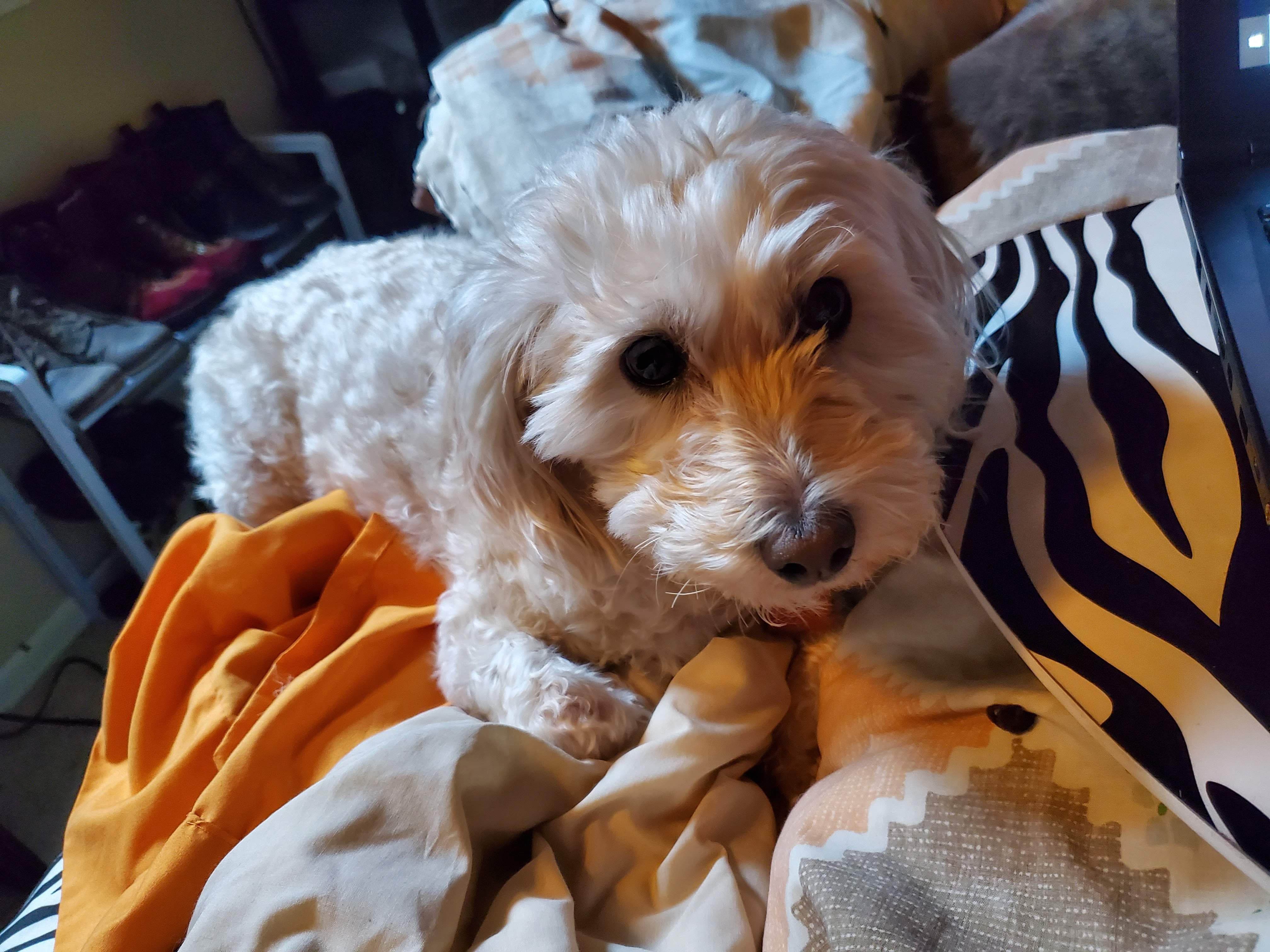 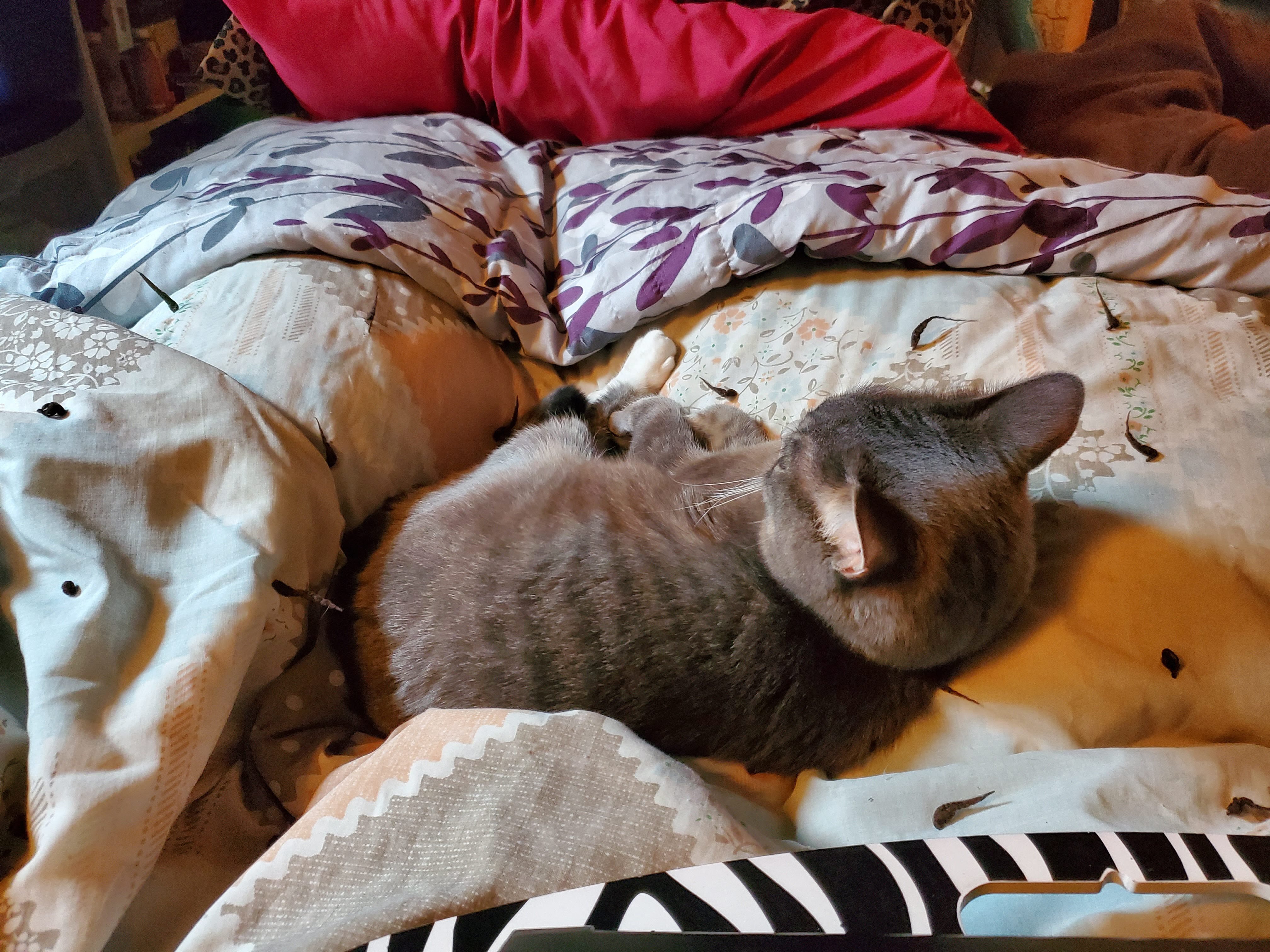 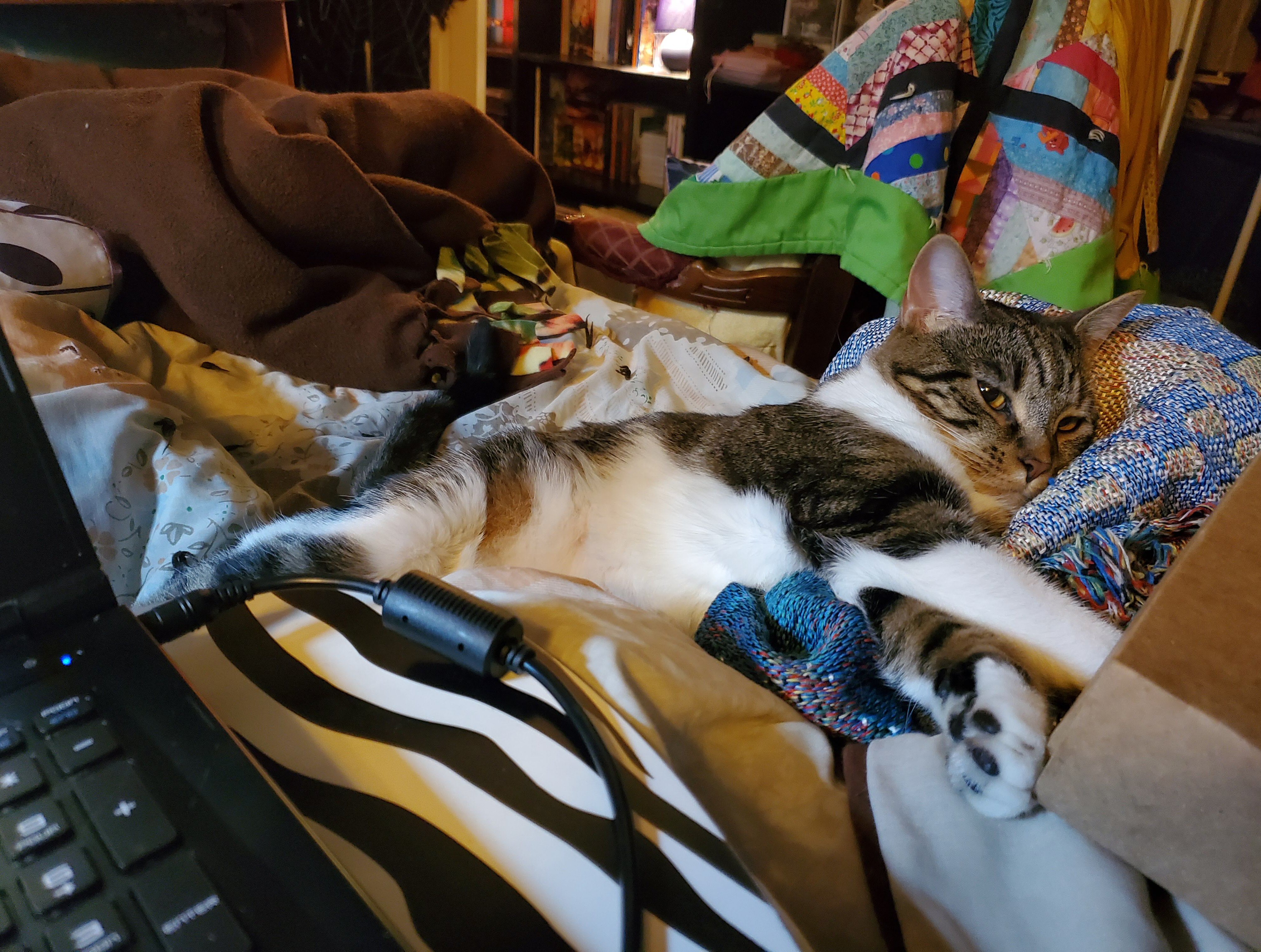 And then, what?? Why is the celery, of all things, sold out?? 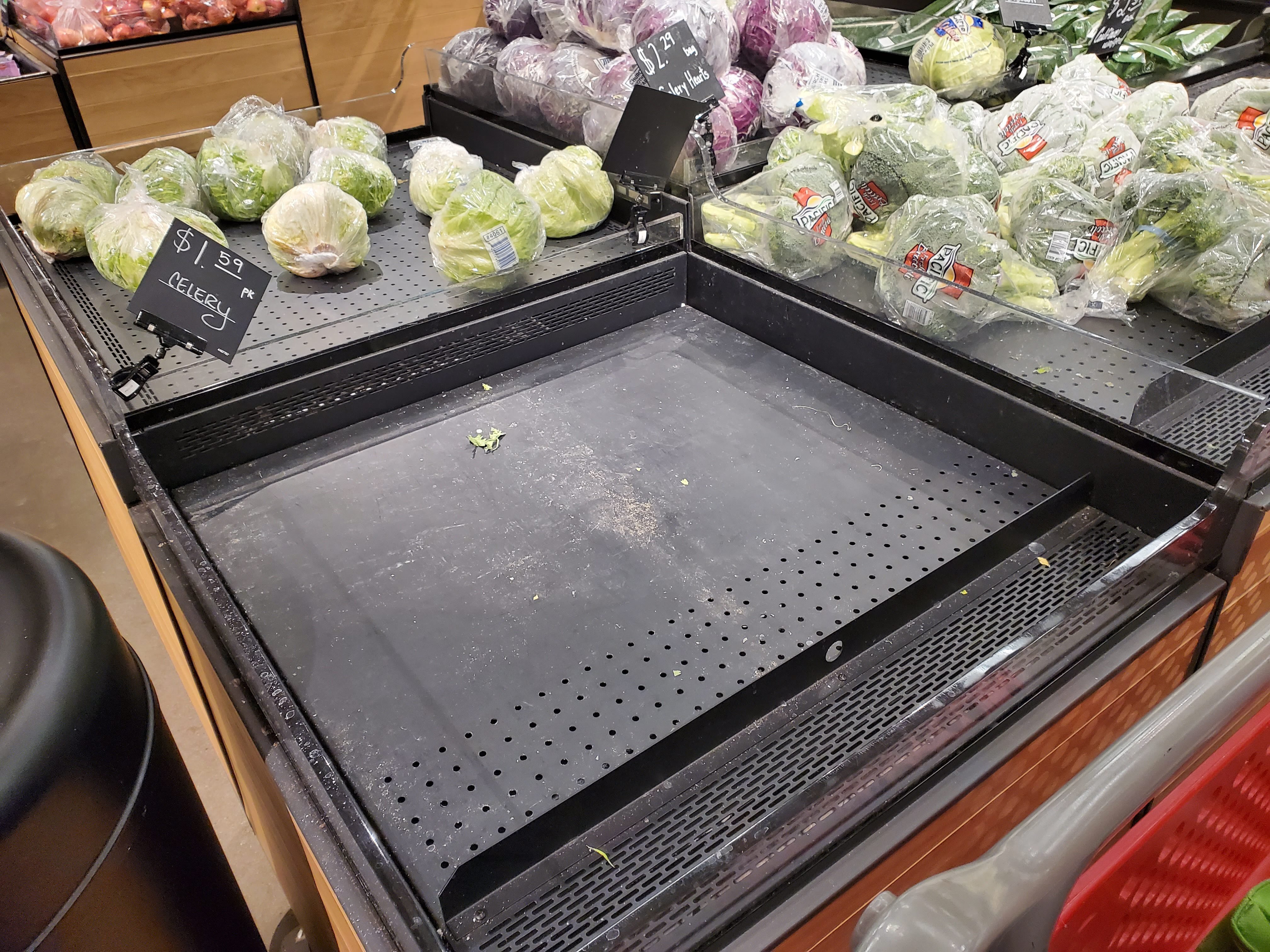 Lee commented, “Who even eats that much celery? You’re the only person I know who even really likes it!”

Then this weird tree. I drove past it twice, so the second time I was ready and made sure to get a picture: 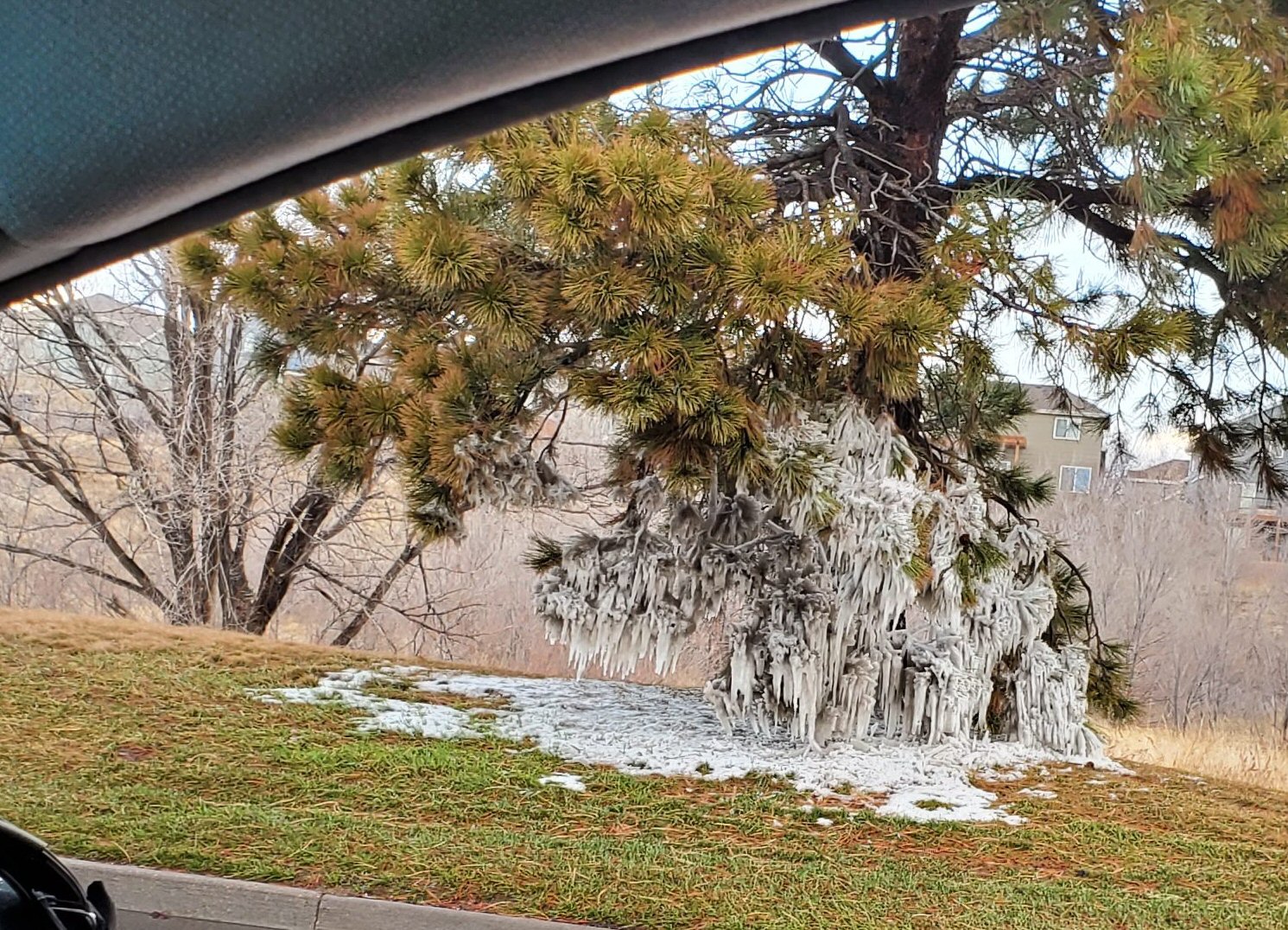 I should point out that, at that time, the weather was reasonably warm, and no icicles existed anywhere else that I saw, let alone in such a concentration. I felt like Elsa had been there.

Having gone into isolation, I watched (and brother with me) several more movies than is my wont. And I can’t even describe how unprecedented and mighty was my animals’ reaction to The Lion King (2019). Hiko barked and growled frantically at the hyenas, and ran around the room. The cats, particularly Suki, were hugely interested in everything onscreen, and I think Suki would have tried to climb up and attack the TV if she could have. It was the best part of an otherwise middling-poor experience XD 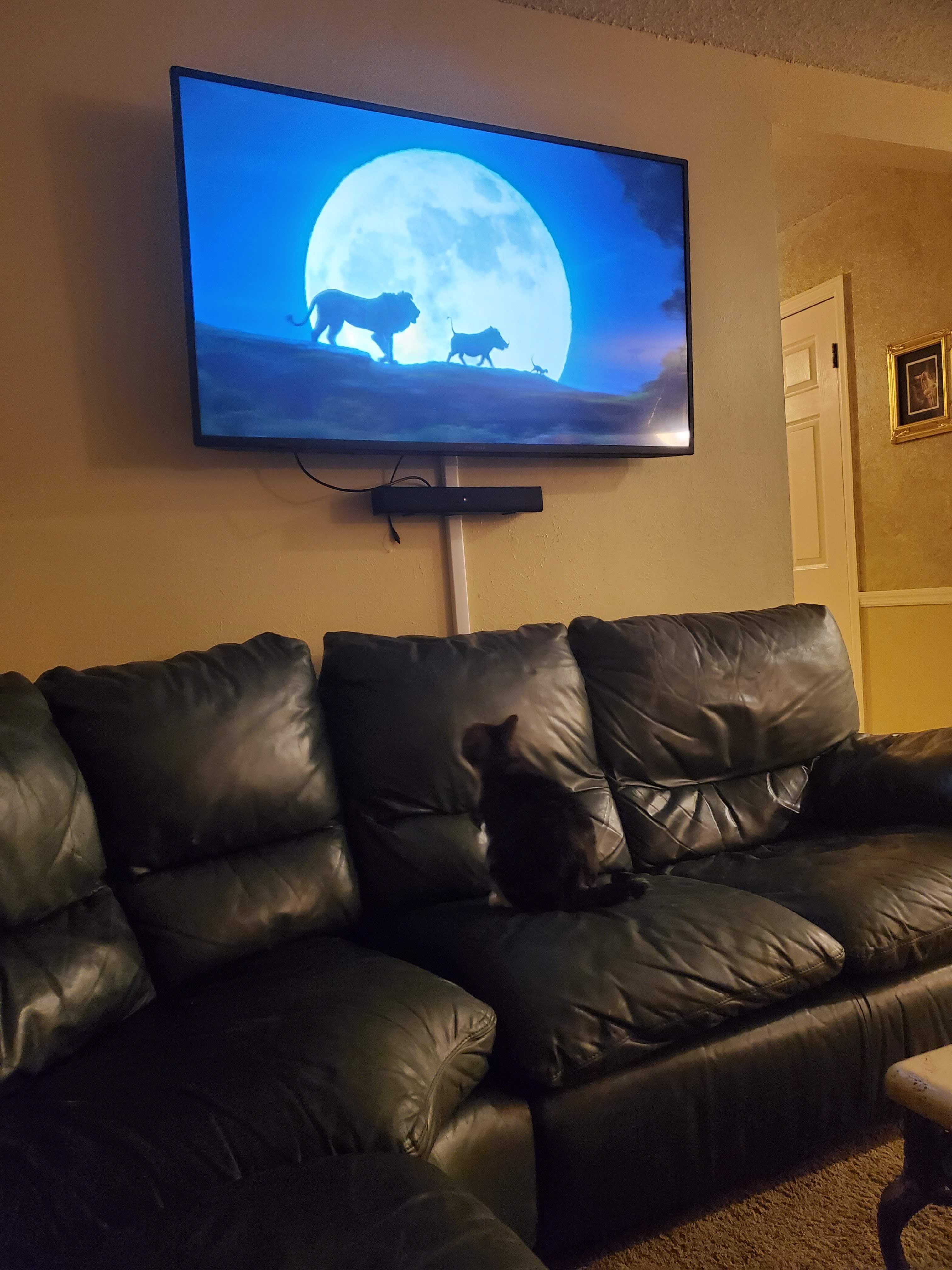 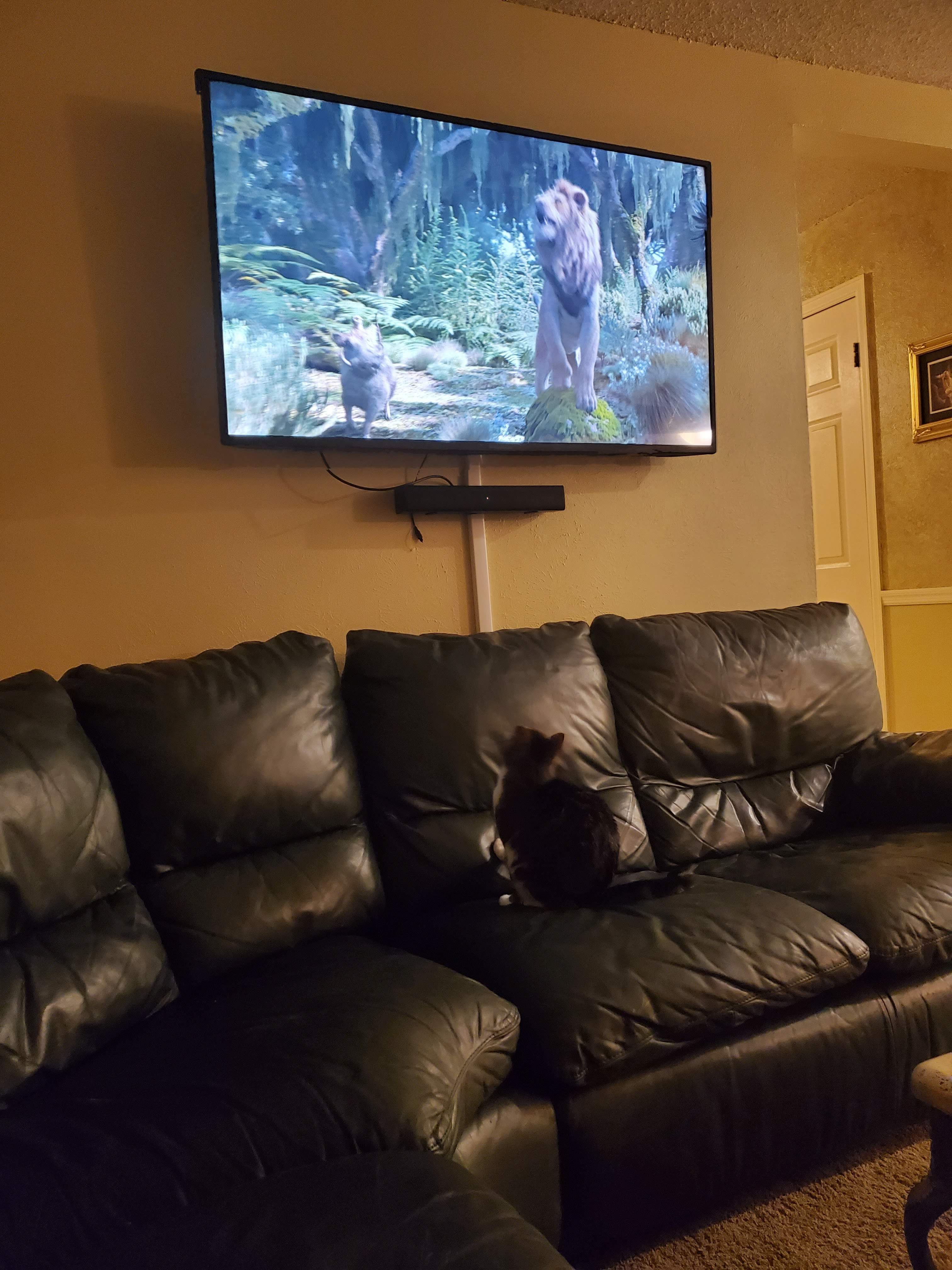 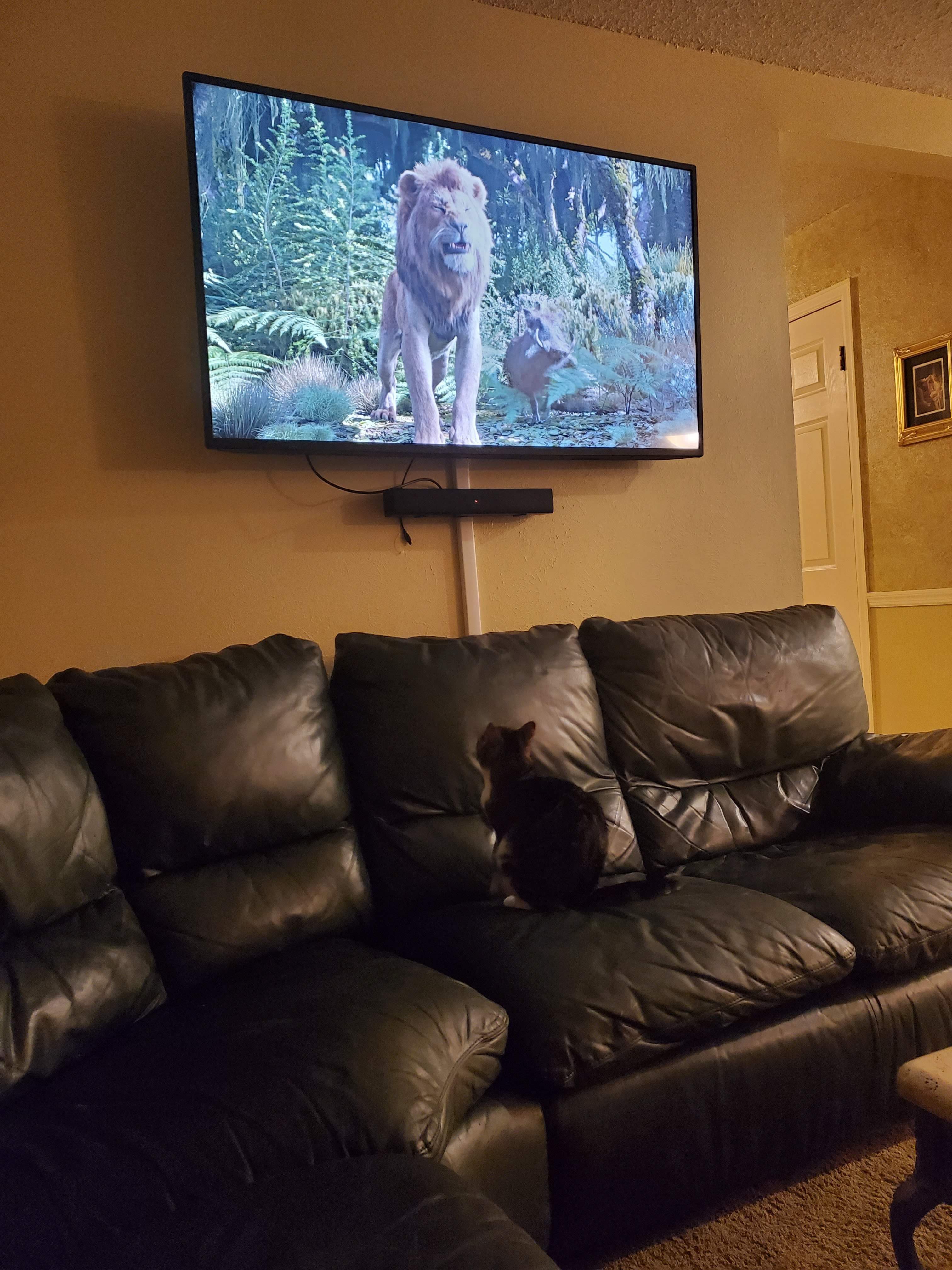 And let’s finish up with Suki sneepin’ on the bed: 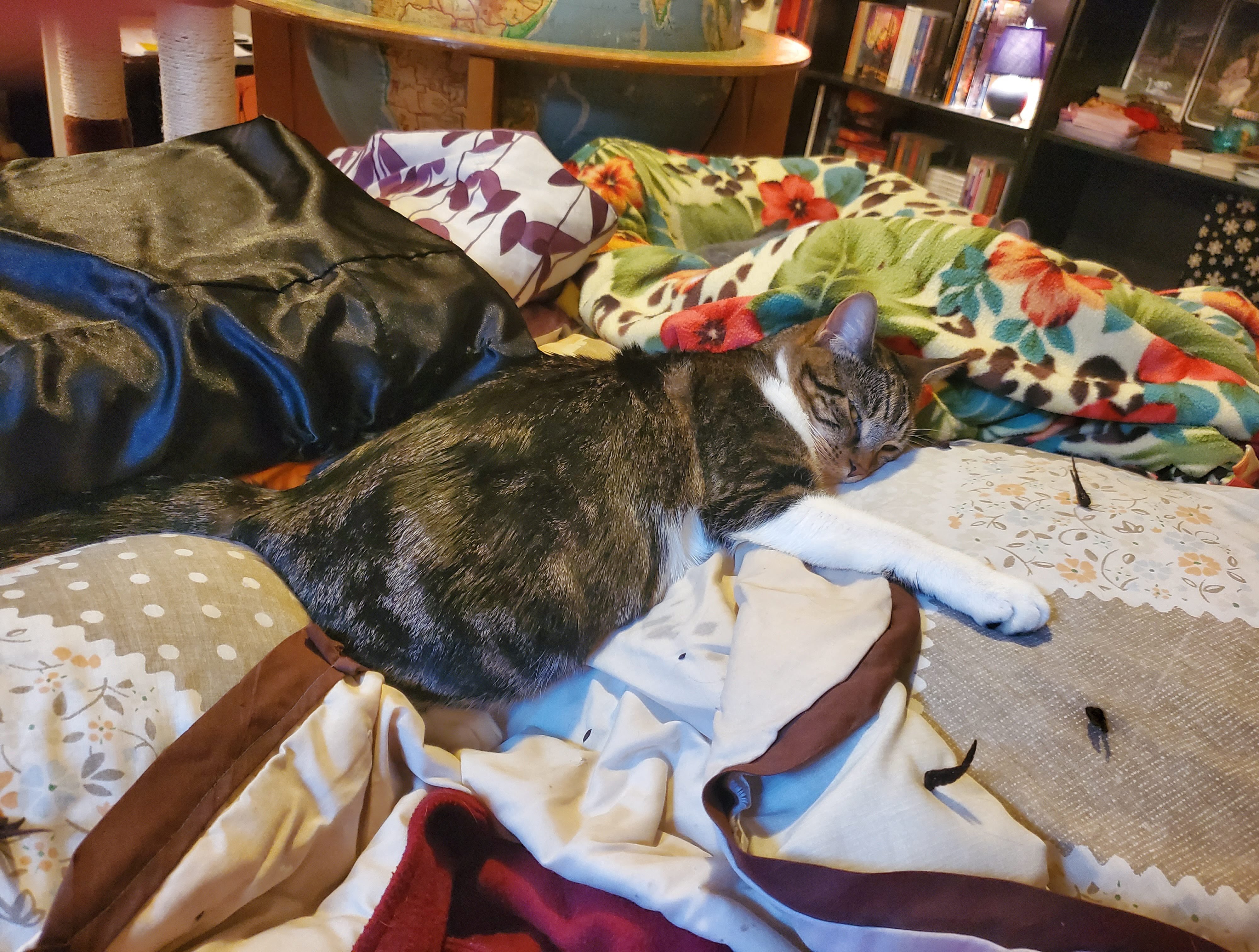