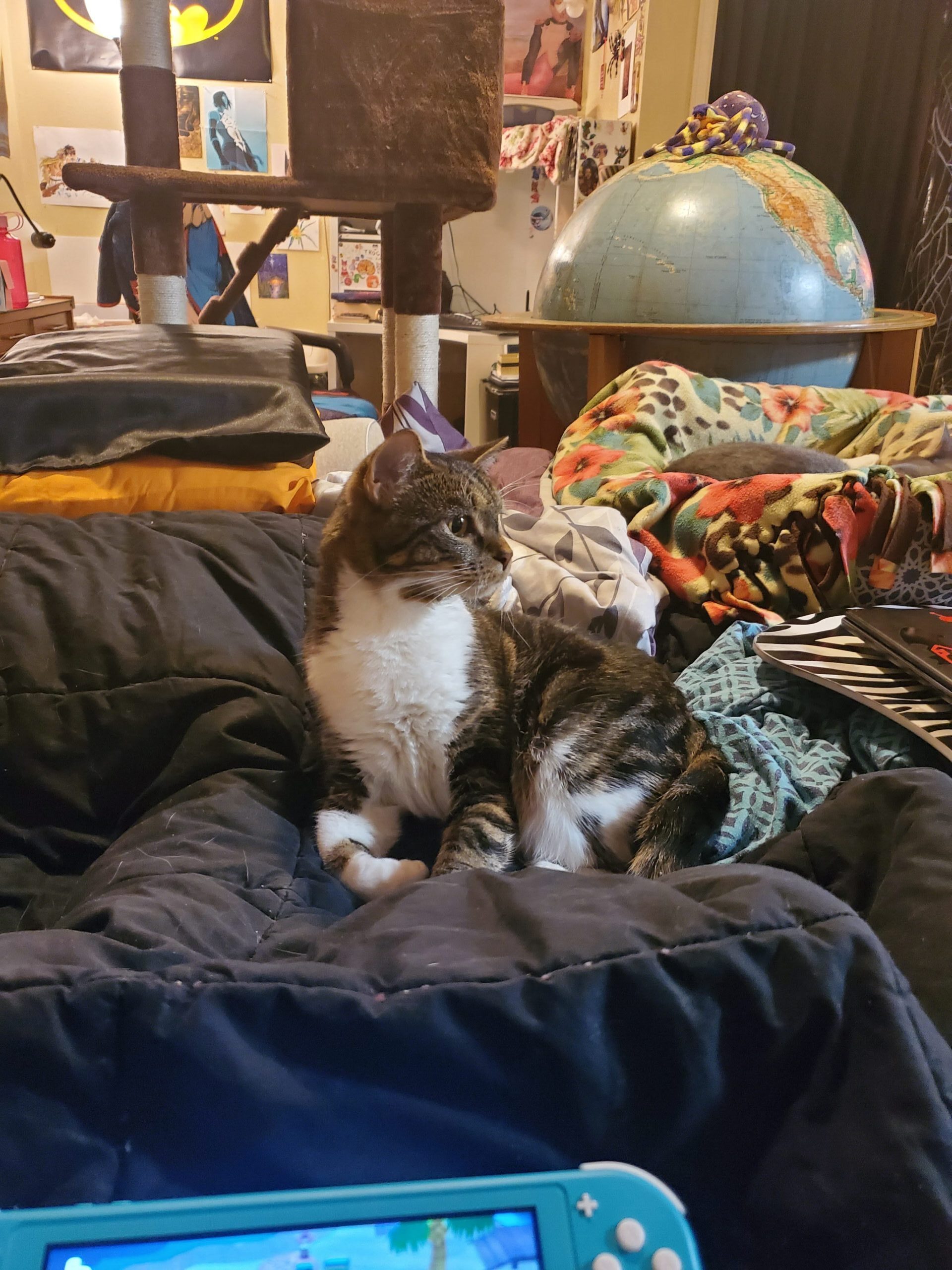 She’s helping me play ACNH. You can see Pipety, too, in the little bed on the bed. OH LITTLE ANIMALS 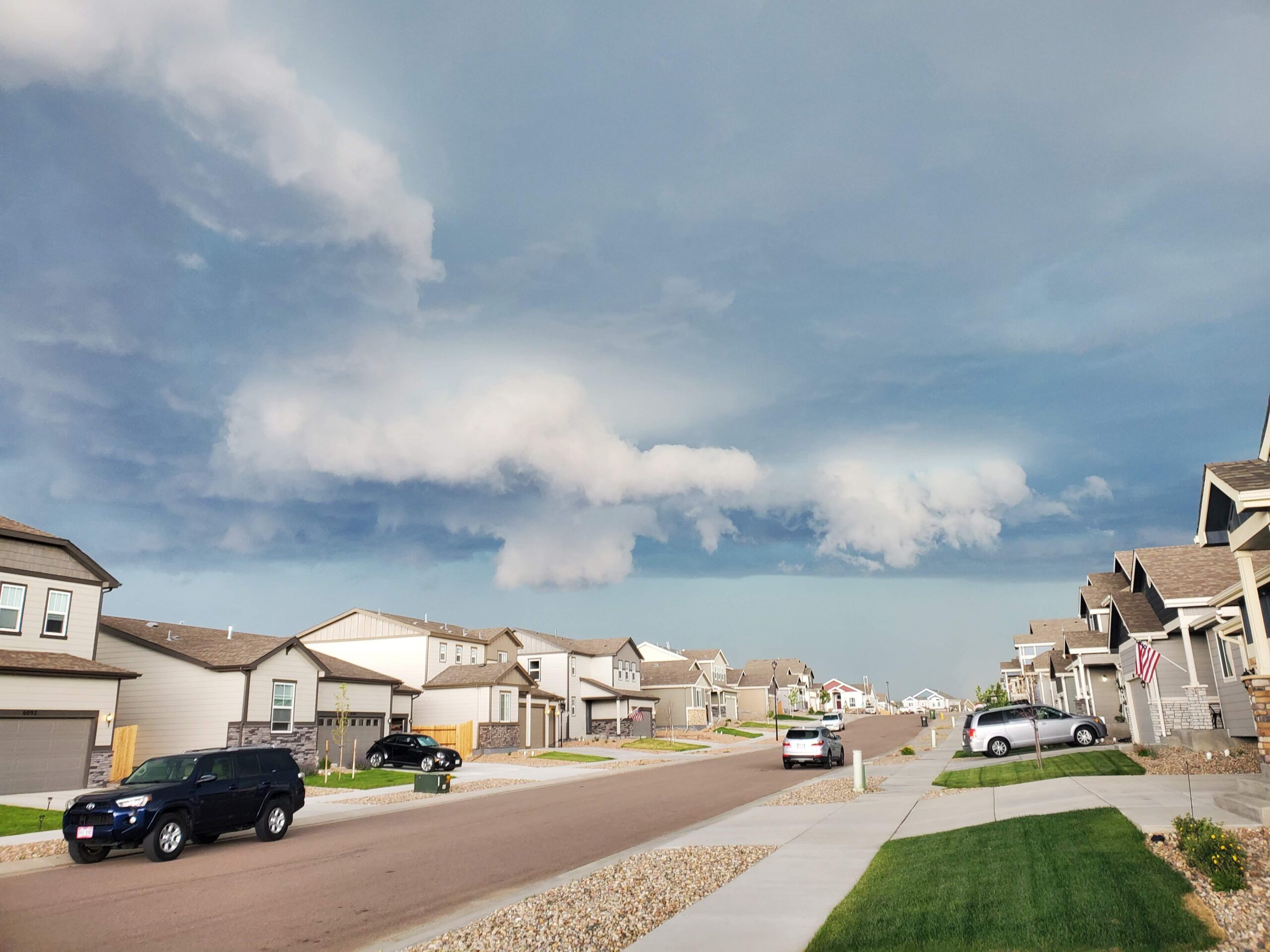 I live on the mountain where sensible people live. To the east are some plains and the two Targets I usually shop at. One day, I had just delivered an order to someone living over there, and the wind was crazy and what was even going on in the sky. I took pictures, because that’s what we do in middle-class America when danger looms. 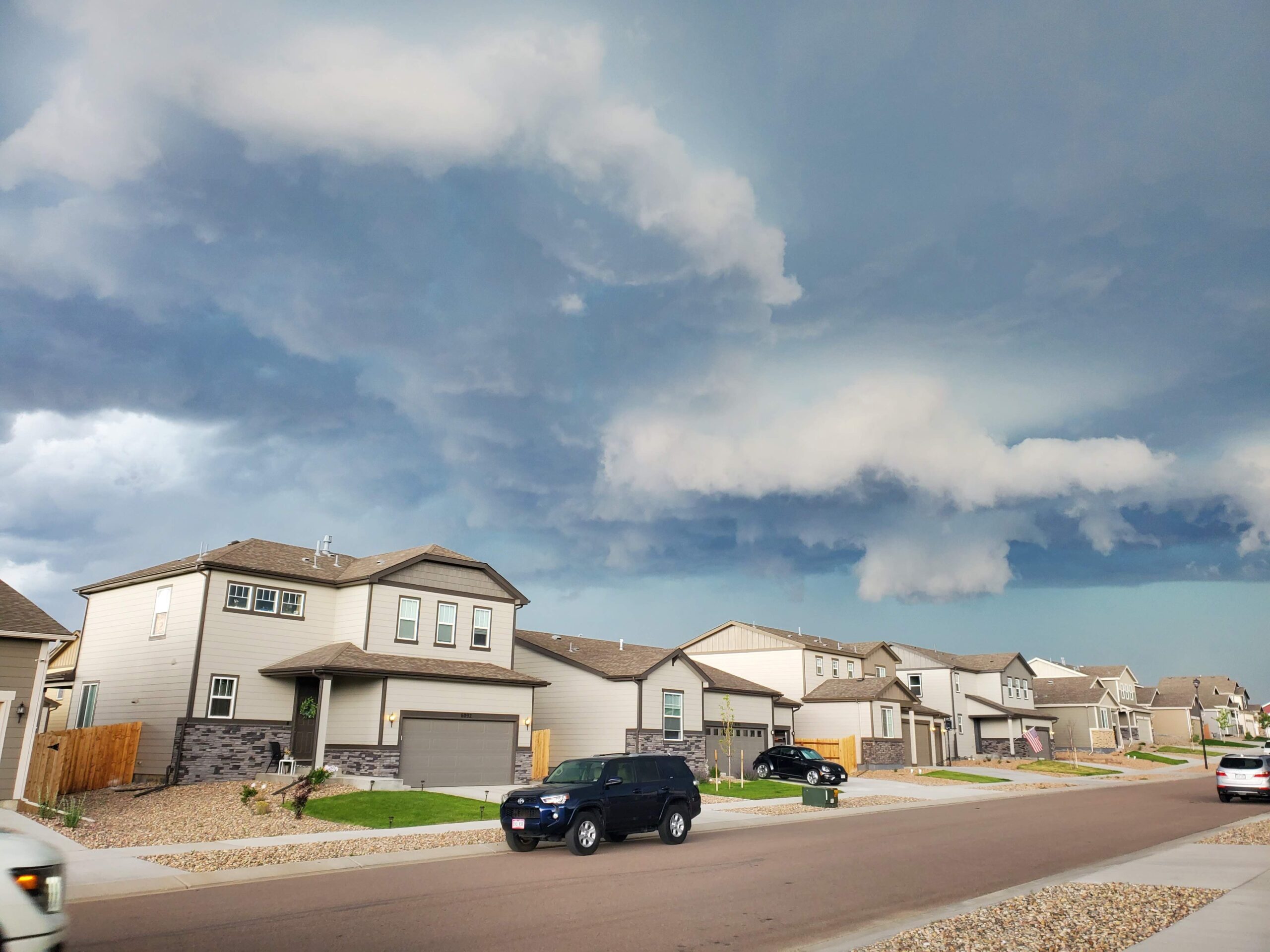 Seriously, I’ve never seen such low-hanging clouds look so three-dimensional before! None of the shots I got really convey the greenness of the sky at this point. 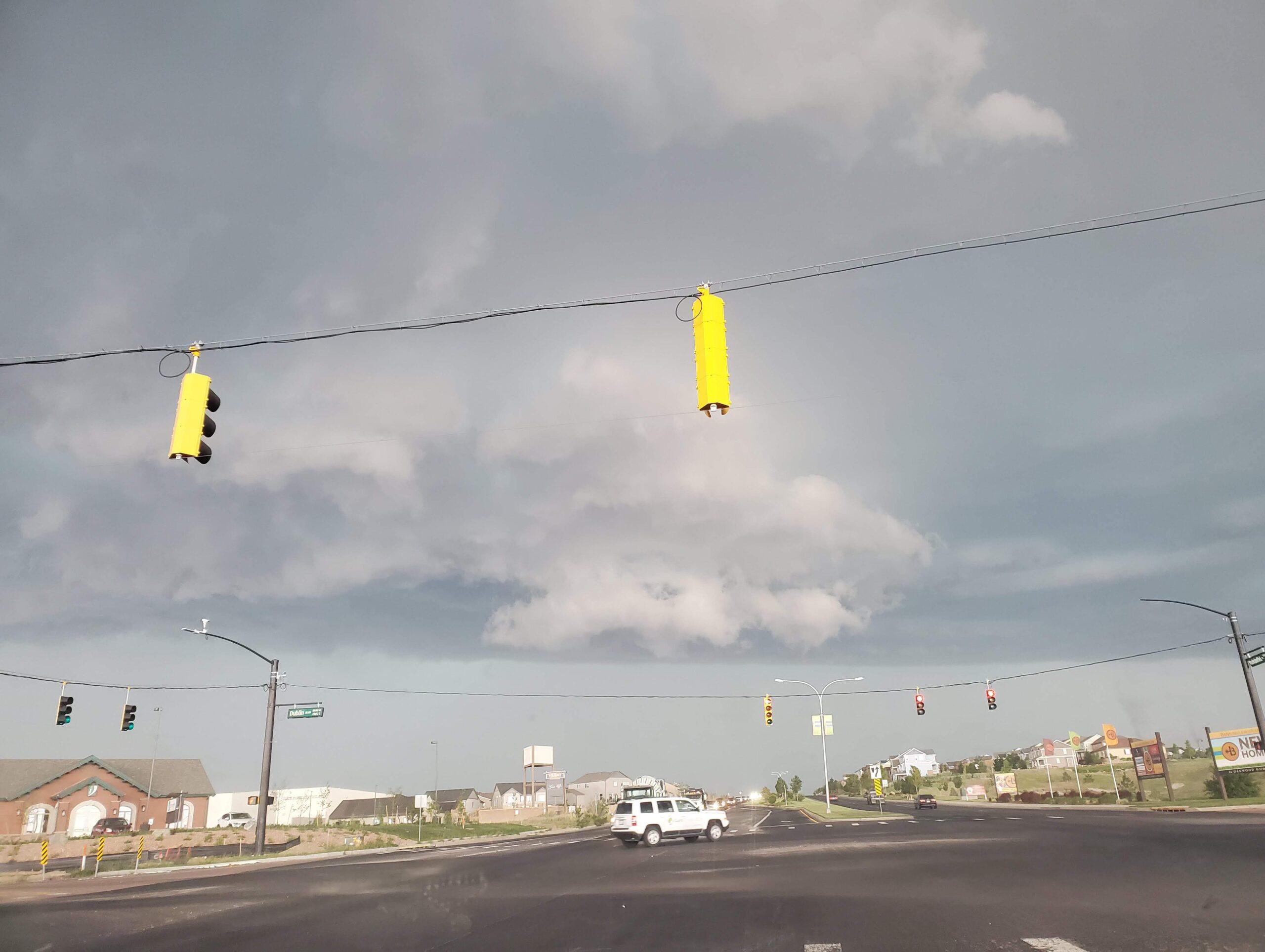 This isn’t far away from where I took the previous two. It’s less interesting. However, I decided to go home because the view in certain directions was getting scary. The “Take immediate shelter” emergency warnings started as soon as I made that decision. Later I heard there had been no actual touchdown, but that didn’t make me feel any less relieved to be at home further up the mountain!

Brother and I realized it had been forever since either of us visited Bishop Castle, so we went. It was my Last Day of relatively mobile health; after that, until this very day, I’m wondering how the hell I managed it. Fortunately, I got a lot of decent photos and video so I can remember it as my ability to handle stairs or steep hill deteriorates. 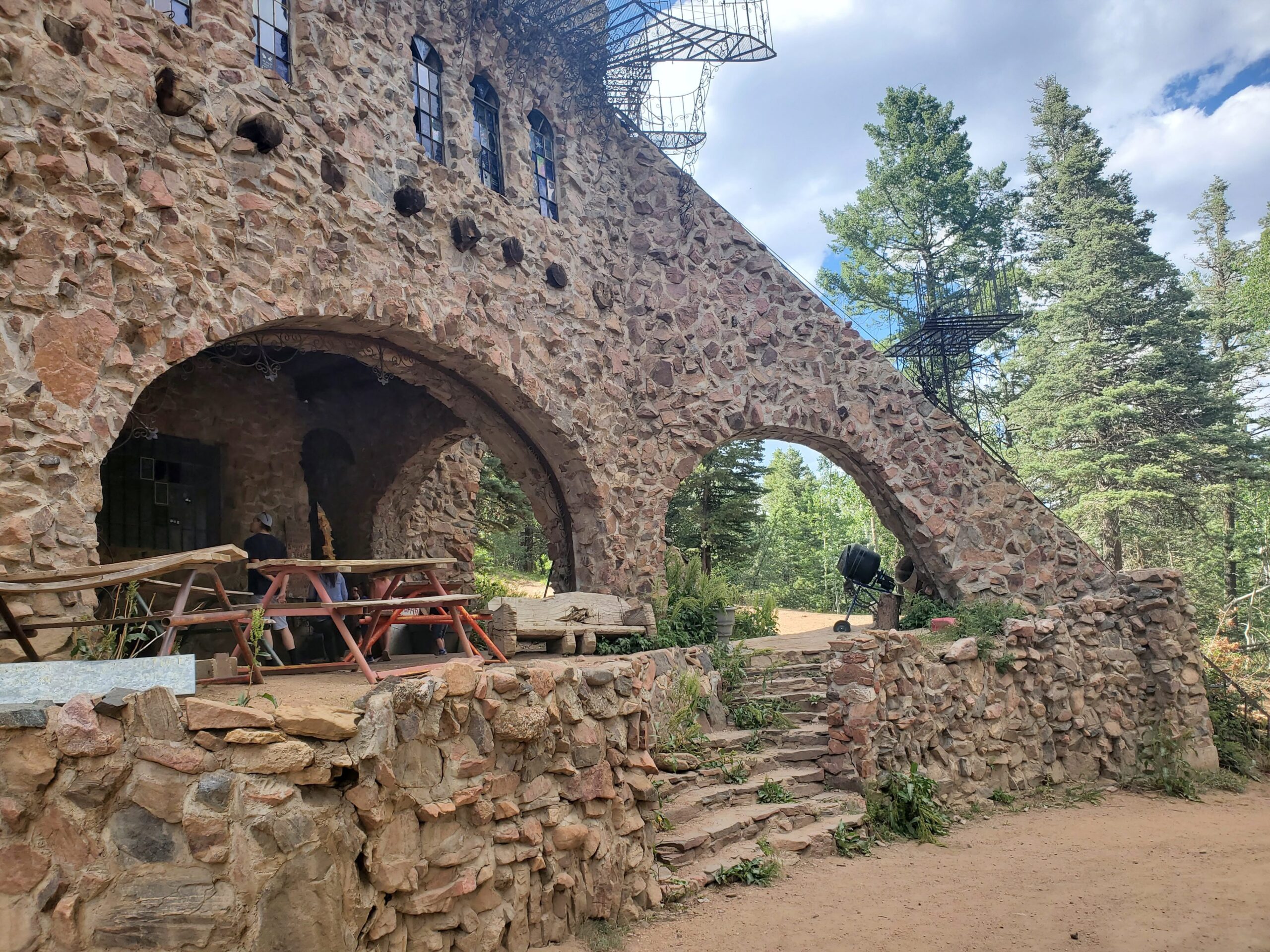 Because the castle is always under construction, it’s never allowed to look nice and not have ugly tables out front etc. Here you can get an idea of how tall the main structure is. You can see the creepy diagonal elevator and the steep staircase.

The Great Hall is on the third floor. I never bother getting a closeup on the stained glass windows because they’re all so ugly. There’s an elevator and shaft that doesn’t seem ever to have been used. There are a couple of chimneys where people actually burn stuff. Check out the creepy diagonal elevator; I don’t think that’s ever been used either. The tower the view goes up is only the second tallest; the next one you see, on the other side of the castle, is the tallest.

The Hall of Arches is on the second floor, beneath the Great Hall. It’s very pretty, but difficult to imagine what it would be used for in a functional sense. The castle is always under construction, so these rooms on the ground floor are packed with junk. This time I didn’t bother taking pictures of every single paranoid sign, but I did run down that one in case you want to pause and read it. Pretty sure I got a shot of that same one last time too. And there’s the steep staircase again; those kids got in the way of a really good look up it. 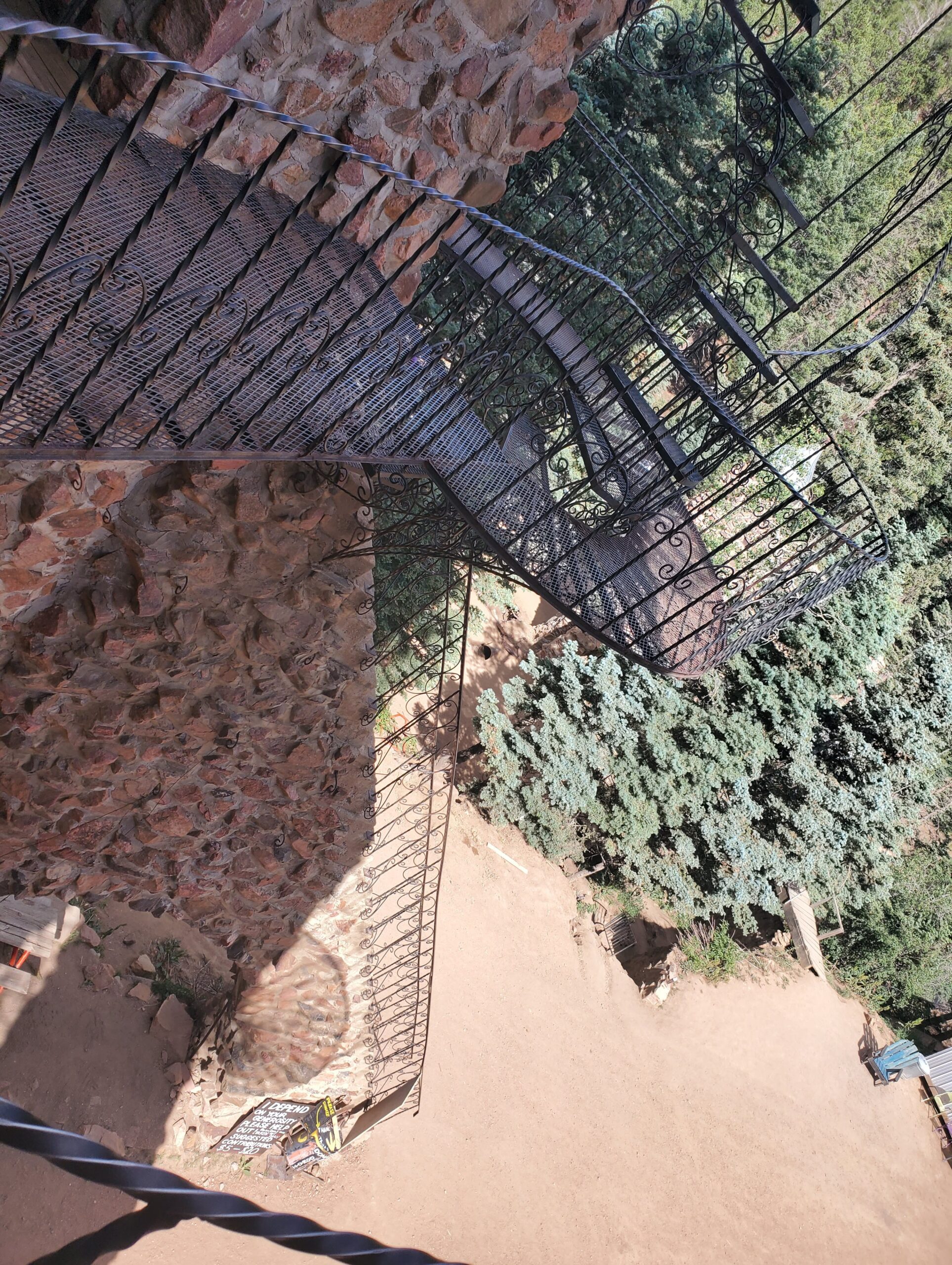 We went up to the top of the the tallest tower. There were some more metal stairs up from the stone, spiraling to a point where there was a small seat, but I was already worn out and pretty scared, so I just sat down and took pictures and video. Here’s broski sitting in one of the tiny guardhouses: 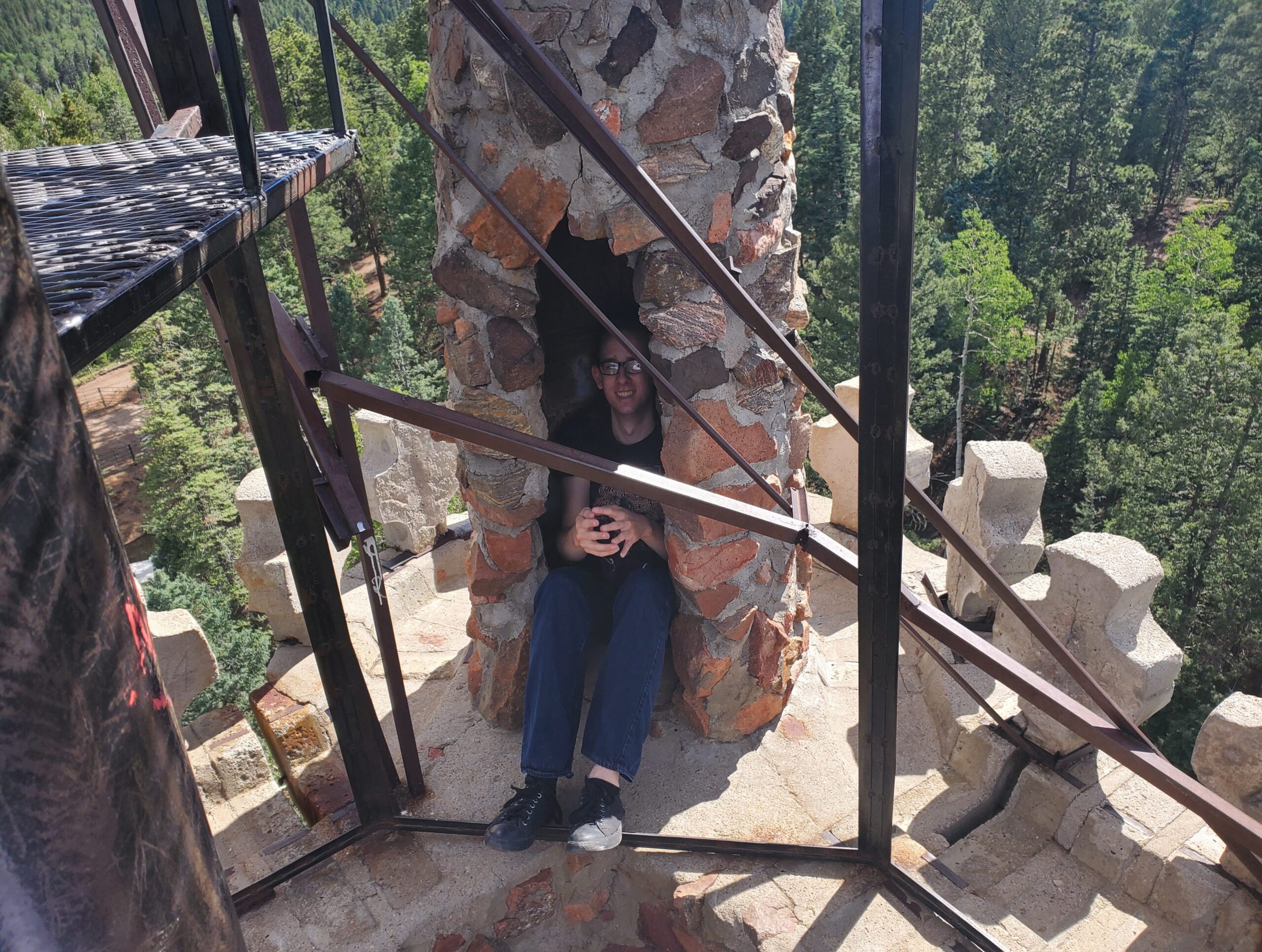 Less paranoid than I am about heights with insufficient railings, he went up to the seat. Mostly, look at the Colorado landscape visible from the tallest tower:

Back to the ground floor for a rest from stairs. The moat isn’t finished yet, and I’m really curious how far it will extend. He’s been working on the front wall with drawbridge and portcullis, but for some reason (even though those are entirely new since the previous time I visited), I didn’t get any pictures of them. Weird. Anyway, you can walk the existing length of the moat, though it was muddy in places, and stand beneath the drawbridge and everything. 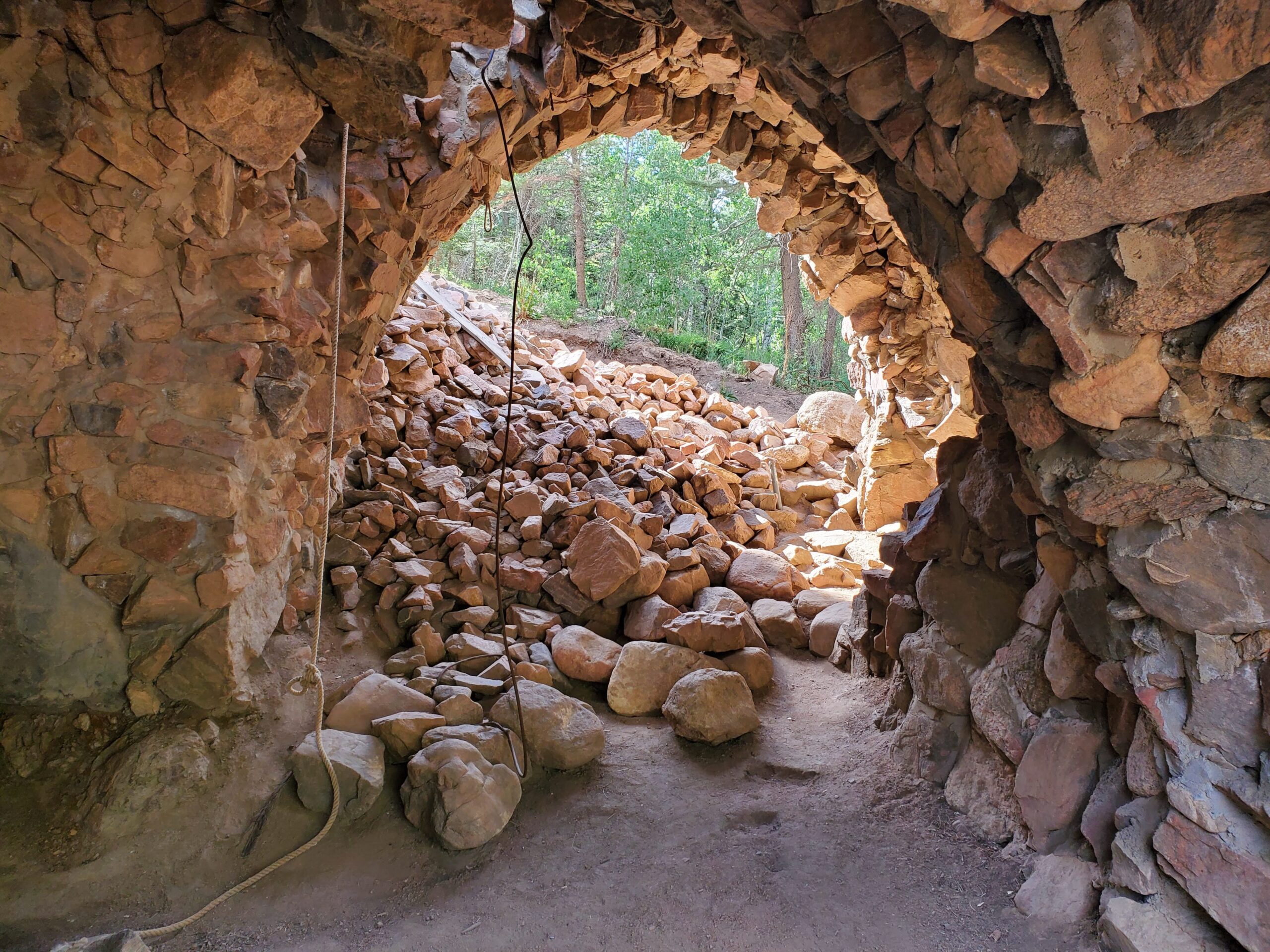 This view is from the bench in front of the ground floor castle openings. The black opening you can see on the left is the opposite view as the previous picture: 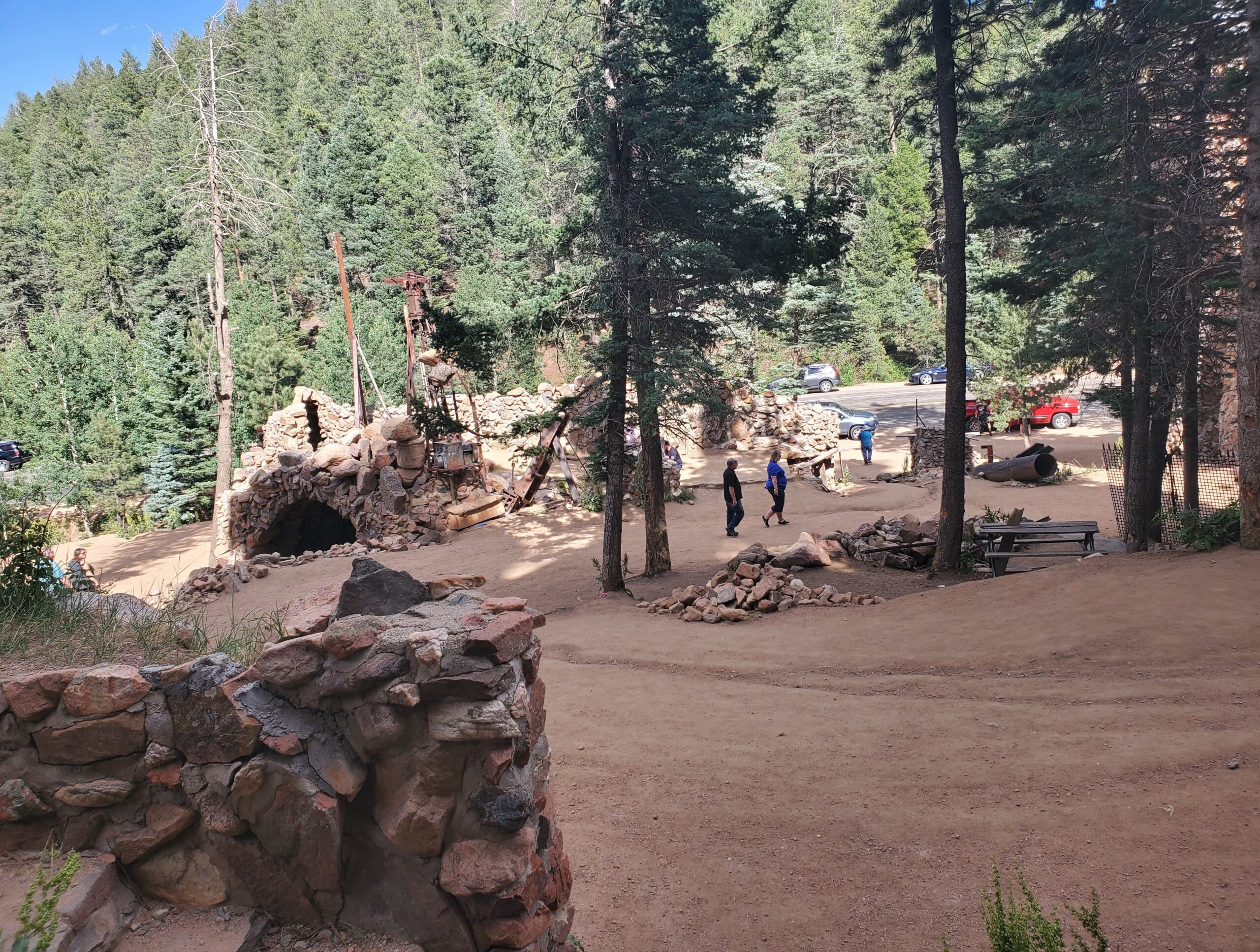 We came across this not-entirely-accurate man-sized model of the castle that was in itself worthy of several pictures: 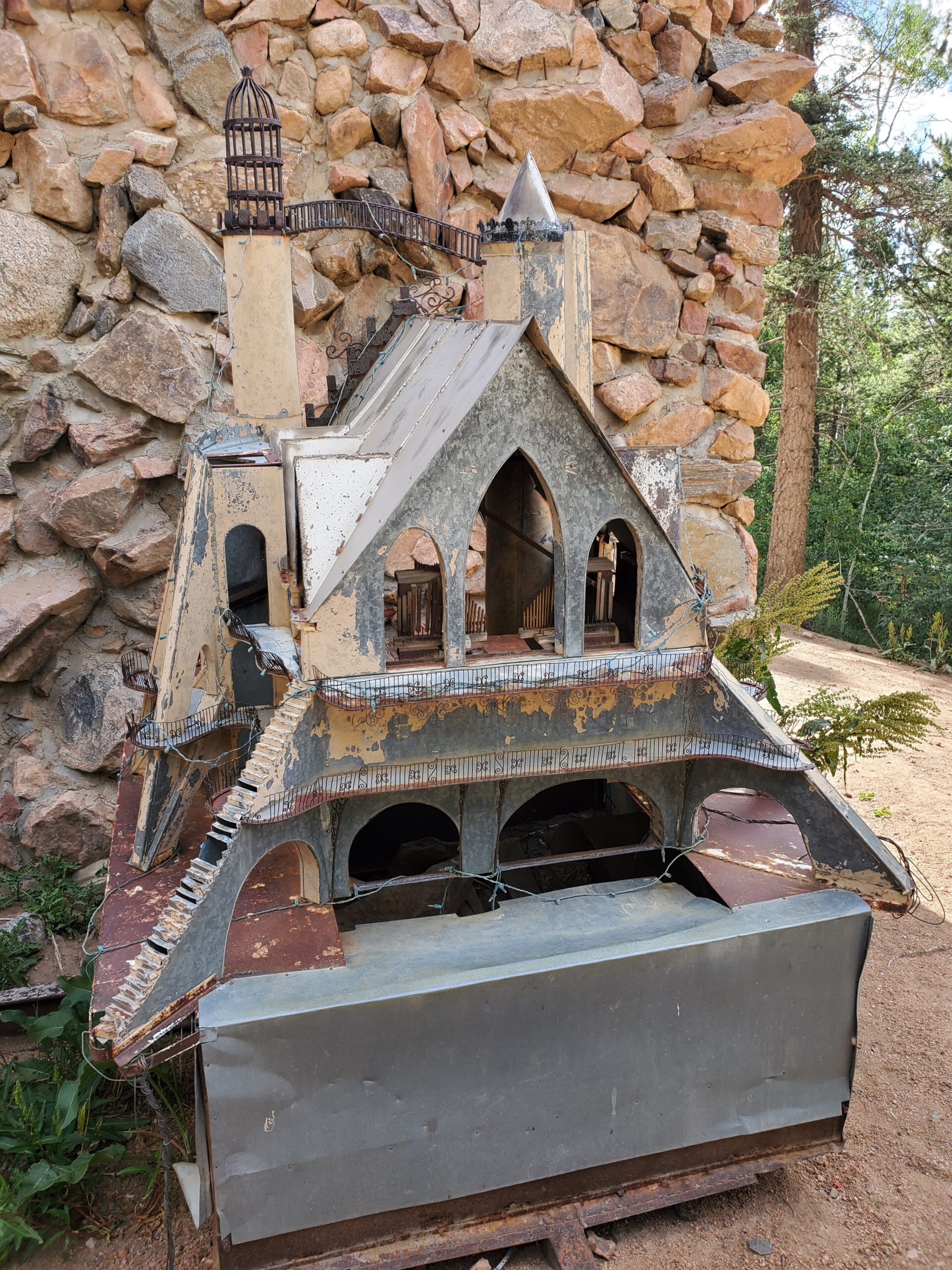 I just adore the horrible shape it’s in. This and the paranoid sign next to it looked like they used to be part of a sort of entry, but now they’re by the Port-a-Potties kinda tucked away in a dell. 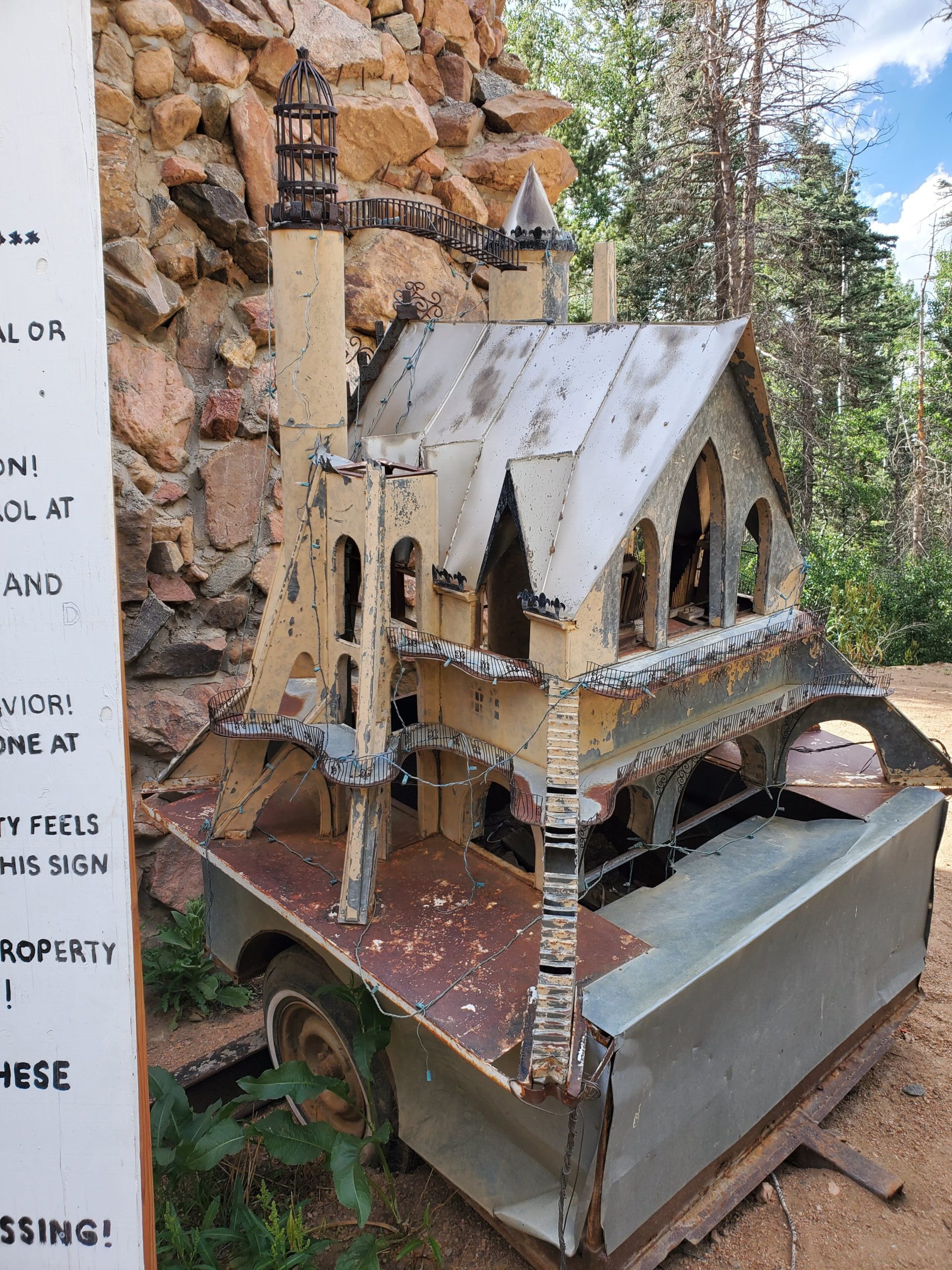 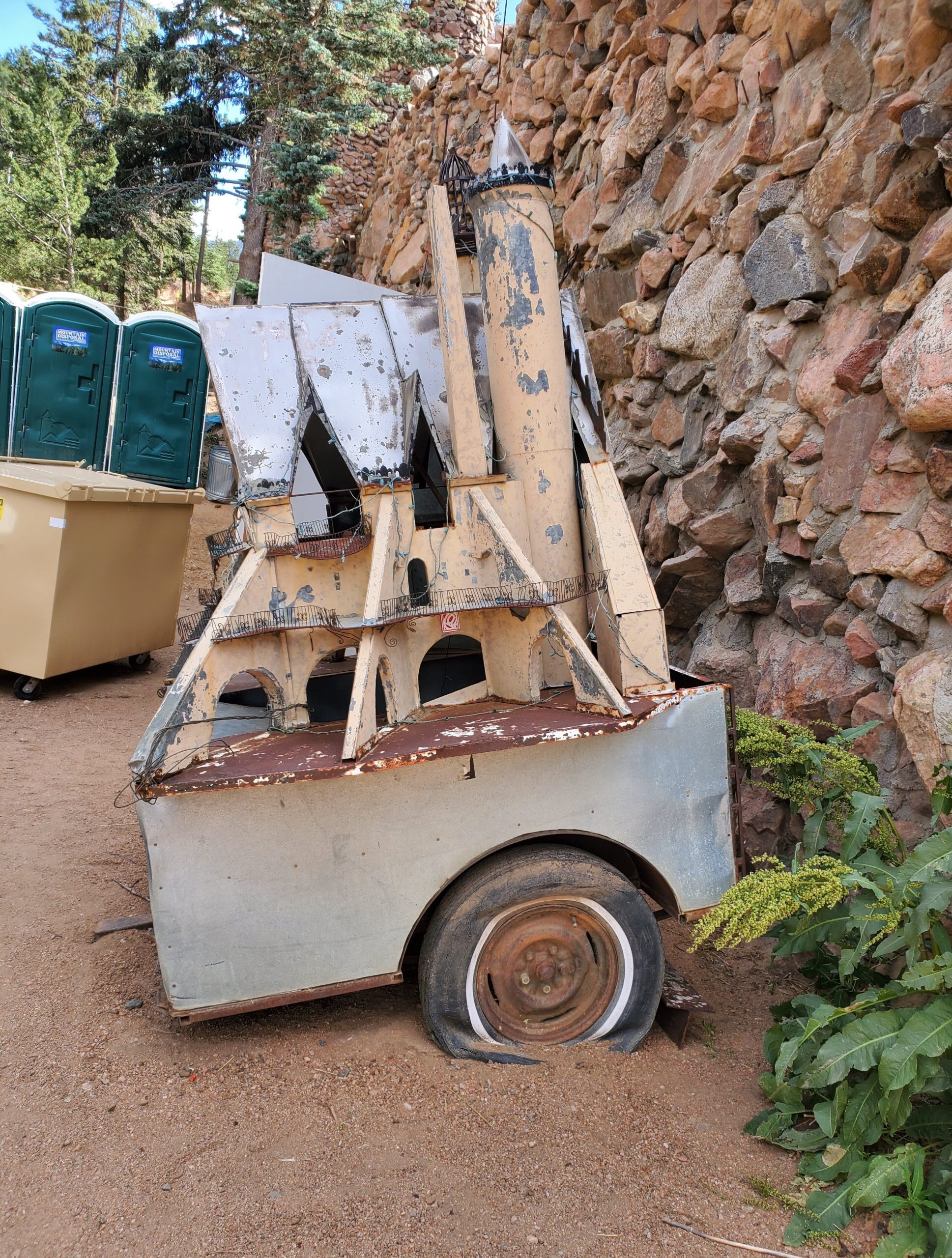 When you look at it from the side, you can see the flat tires. And at this point I got hit so hard with… I don’t even know what to call it… like nostalgia but much more intense and not necessarily positive… like being triggered except what popped into my head in response to the sight wasn’t traumatic. For lack of a better term, I was viscerally reminded of the Clock of the Time Dragon, which is, for lack of a better term, very striking in The Wicked Years. I tried to explain to brother, and that did not work. Ooh, I’m shivery now just writing about that moment. 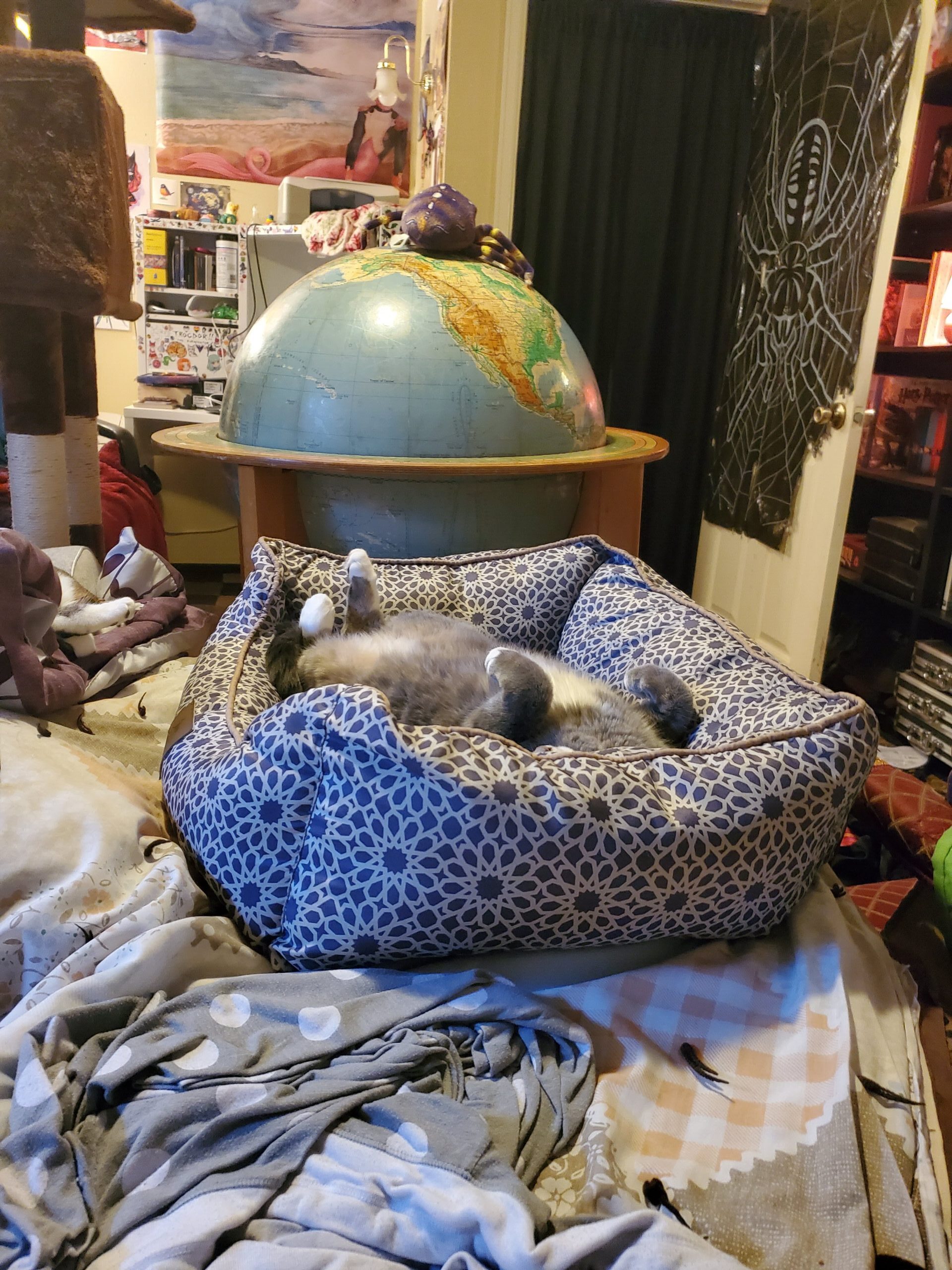 I can’t get over how cute this is. I want to reach into the picture and give her a belly rub. 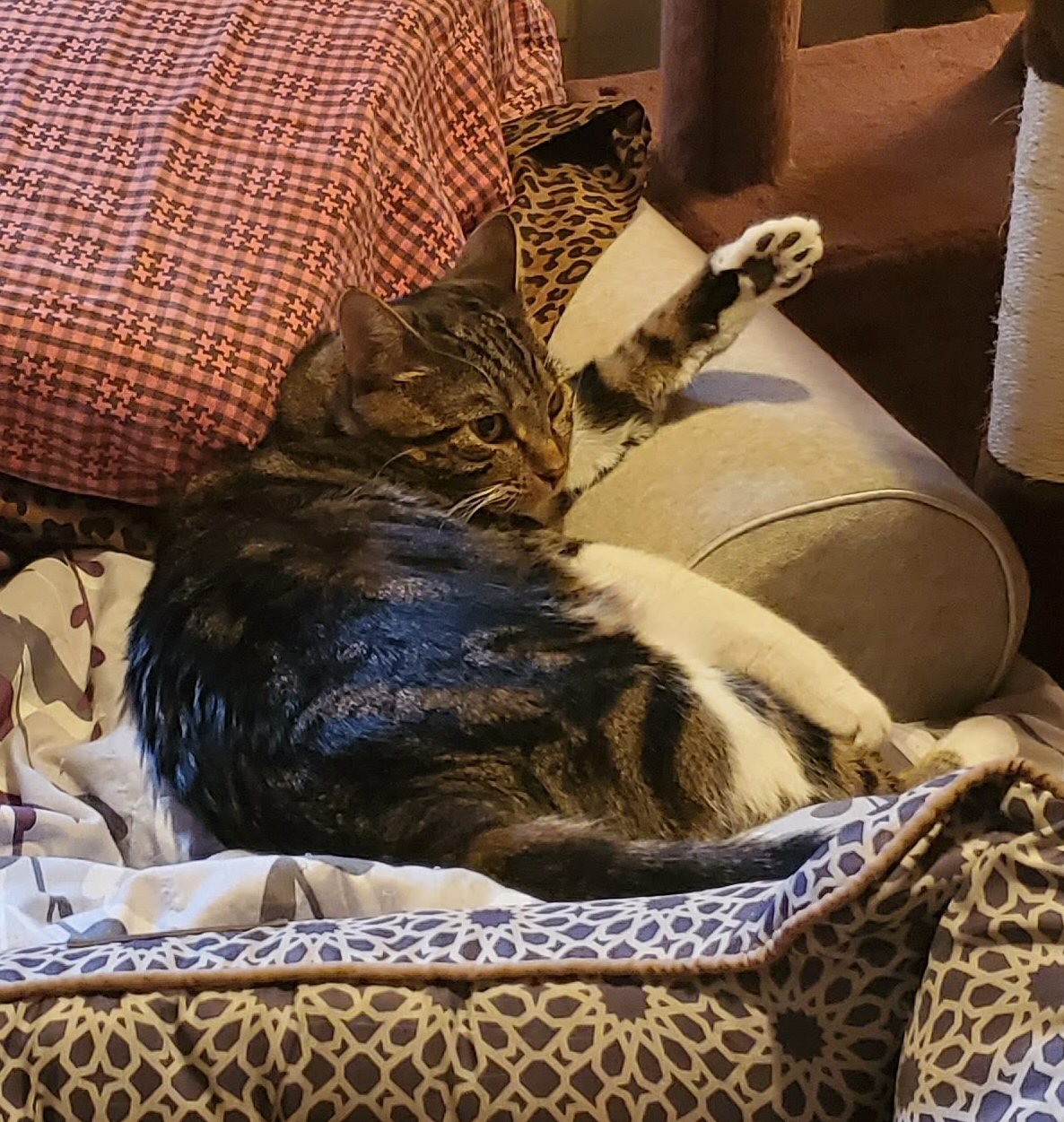 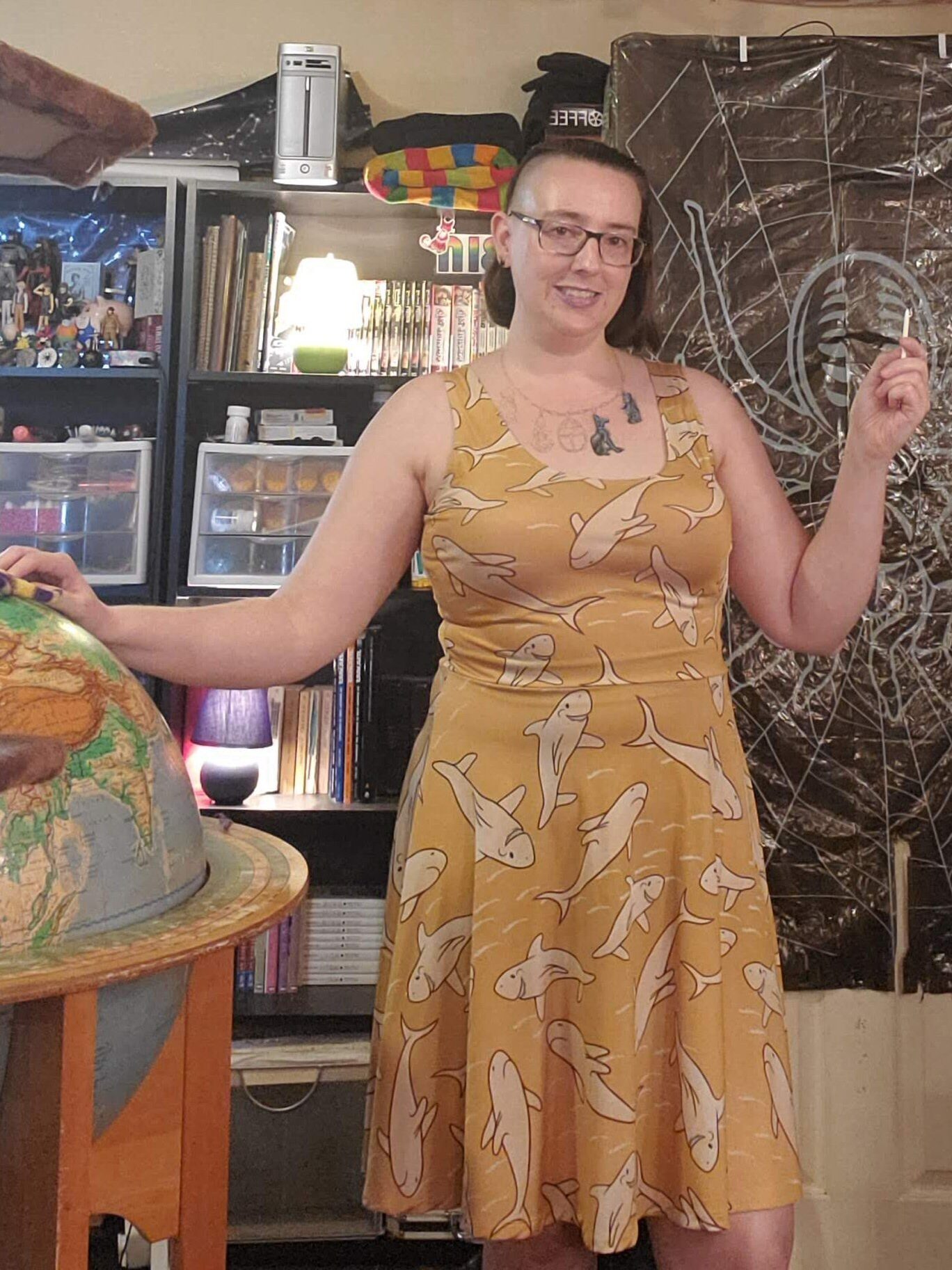 I’ve seriously gained, like, 20lb since the pandemic found its way to my area. I’ve also completely run out of money, which is why my tattoo remains in the state it was the last time I posted about it. 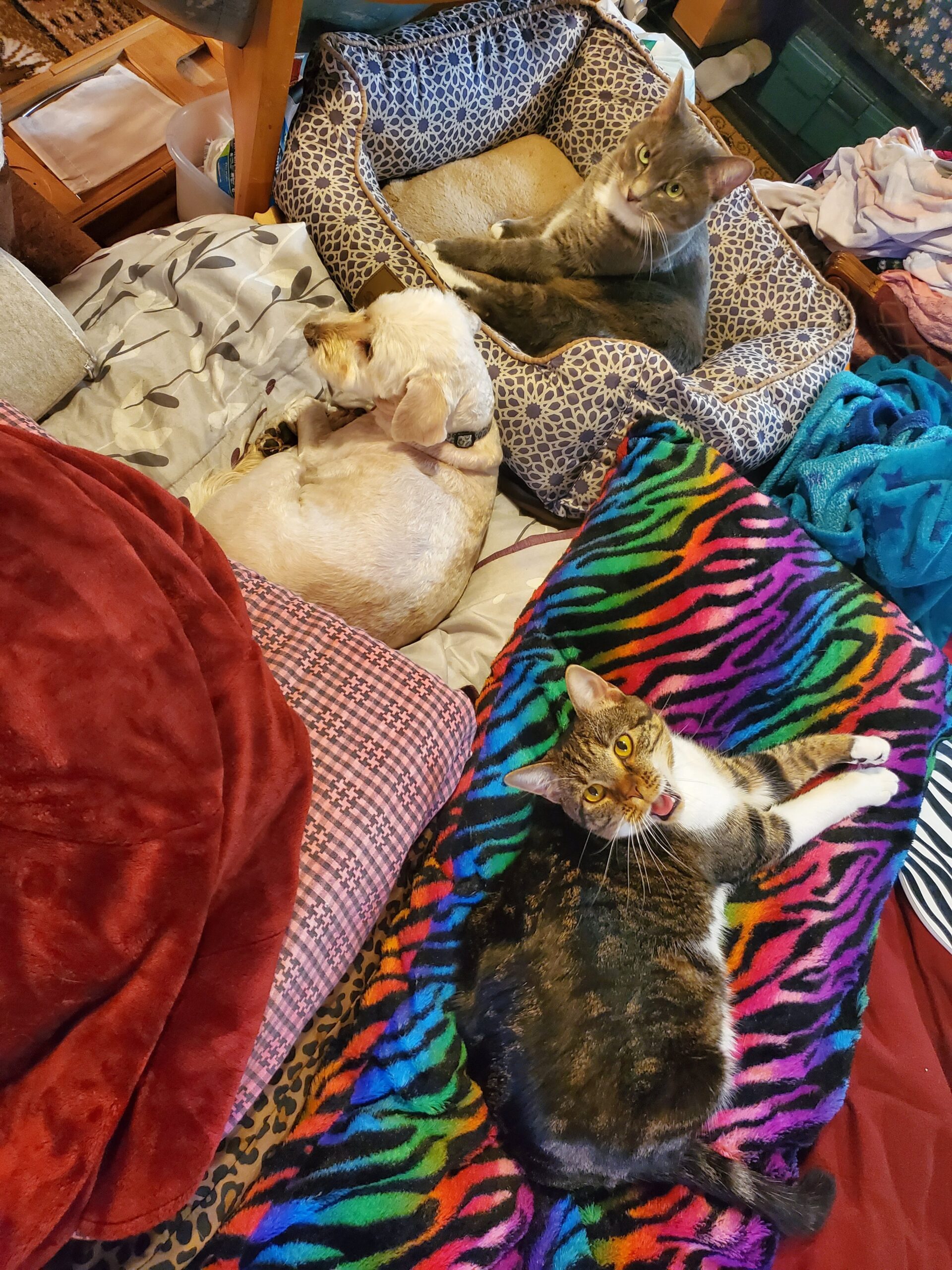 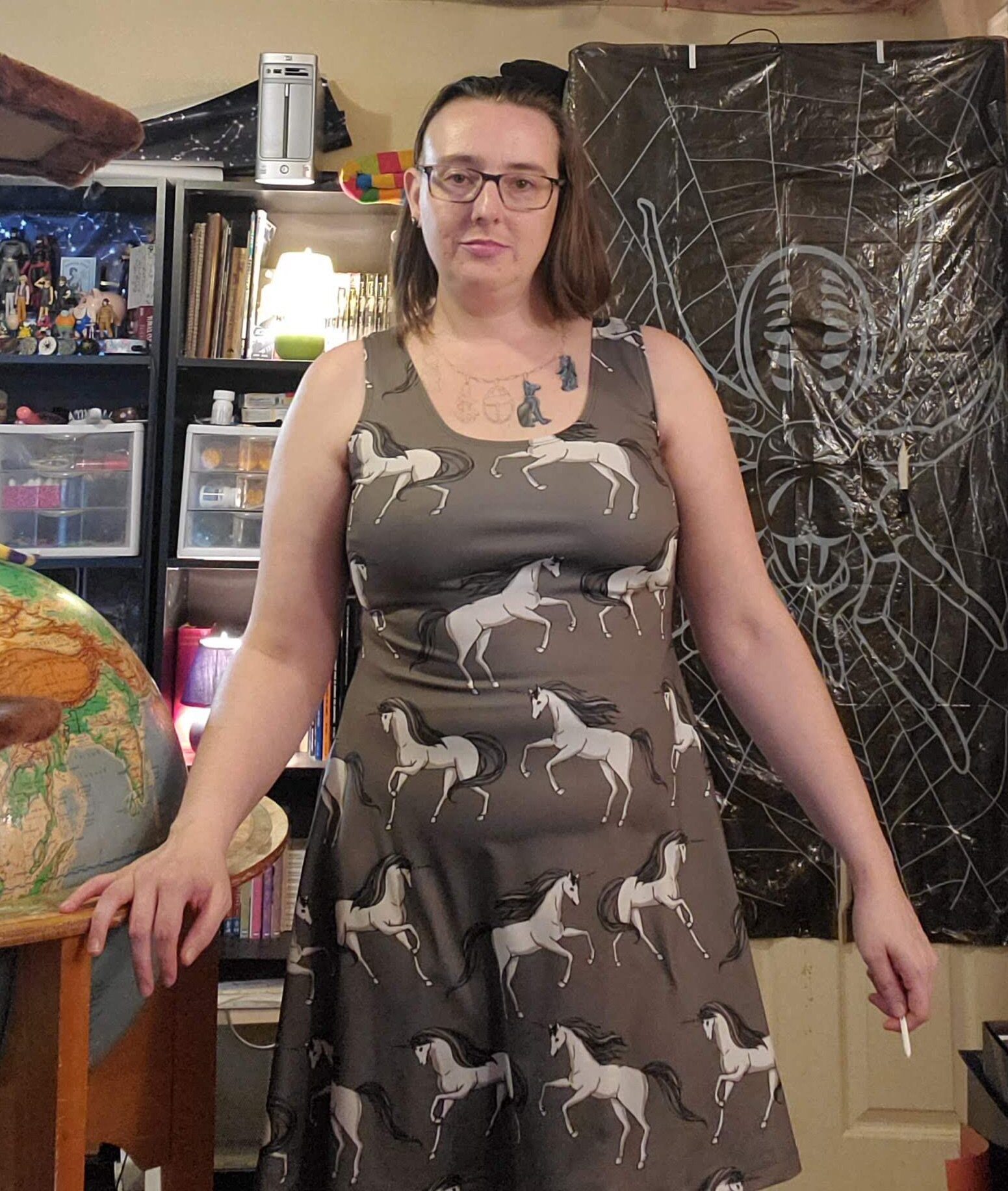 It had to happen in the summer, too… the very time to wear CowCow dresses. Oh, well.

I grabbed some bottled water (probably on the Last Day for that too XS) for a Target order, and a small pide appear on my hand! I blew it off onto the shelf, but then it just stood there looking gormless. I hope it wasn’t killed by the next customer that needed bottled water. 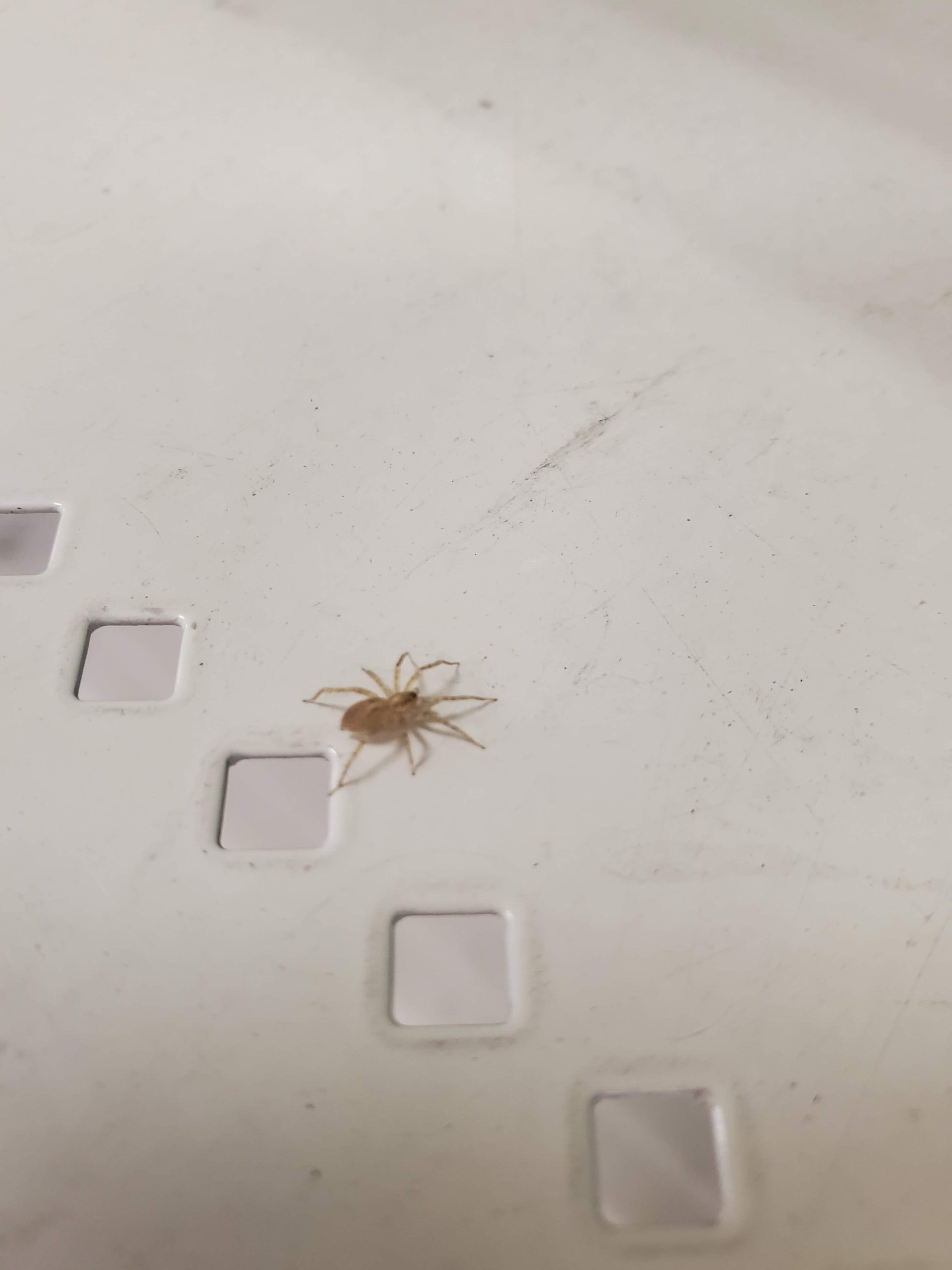 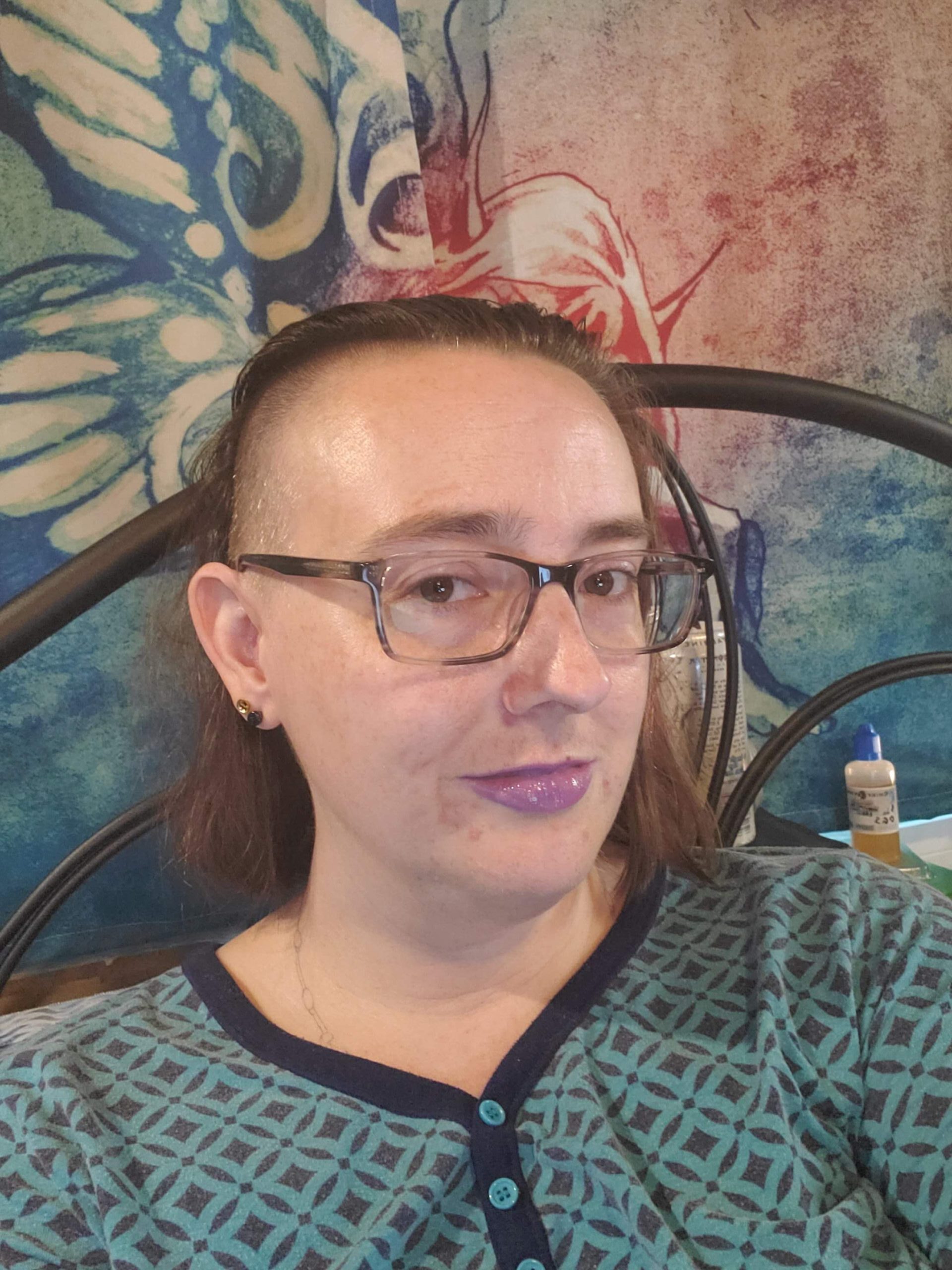 The reason for all these selfies (besides to document my increased weight) is that I was chatting with some ACNH friends on Discord, and it turned out there was a HUUUUGE age difference between me and the rest of them. When they heard I was about to turn 40, they were curious what such an elderly woman could possibly look like.

And of course I had to show them my favorite CowCow dress! 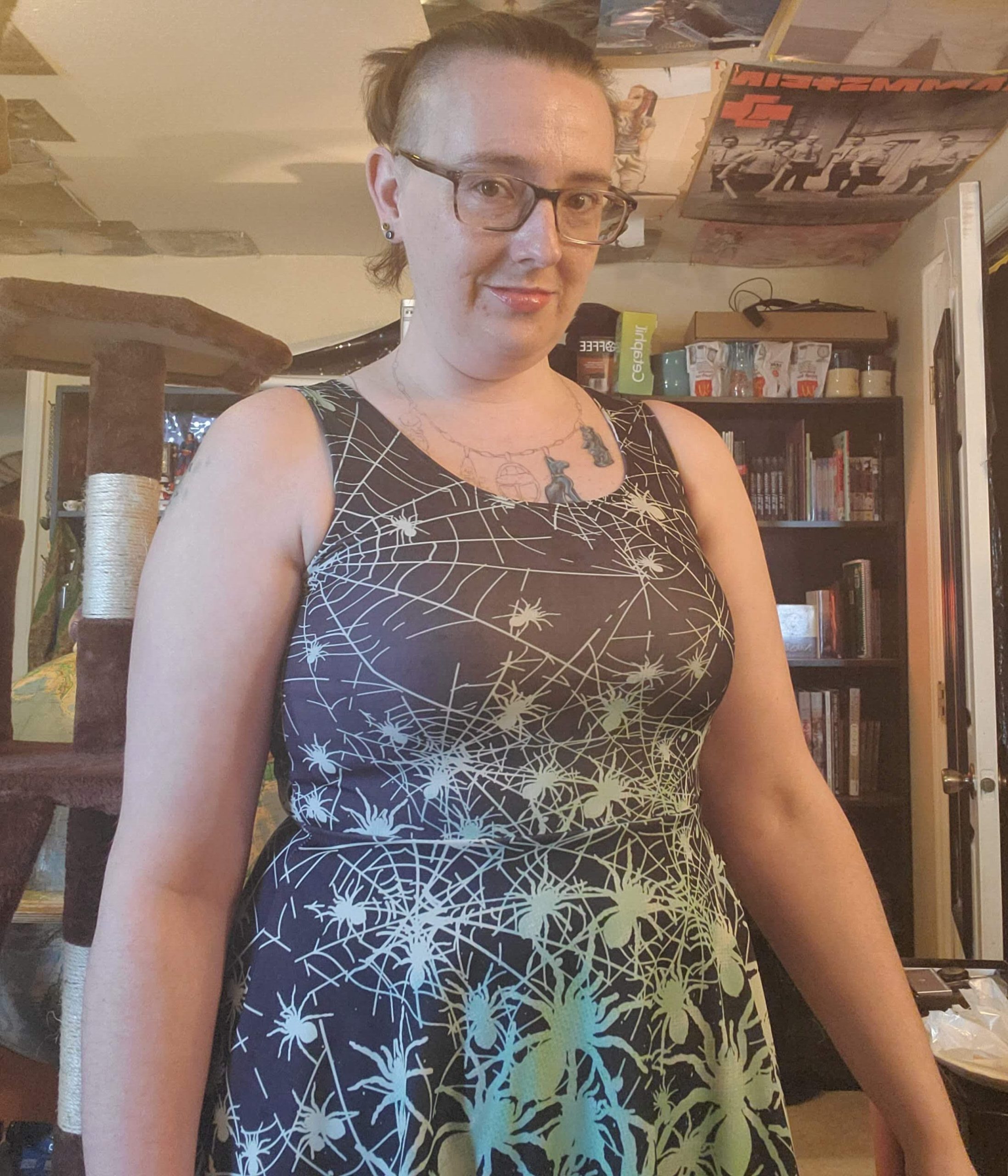 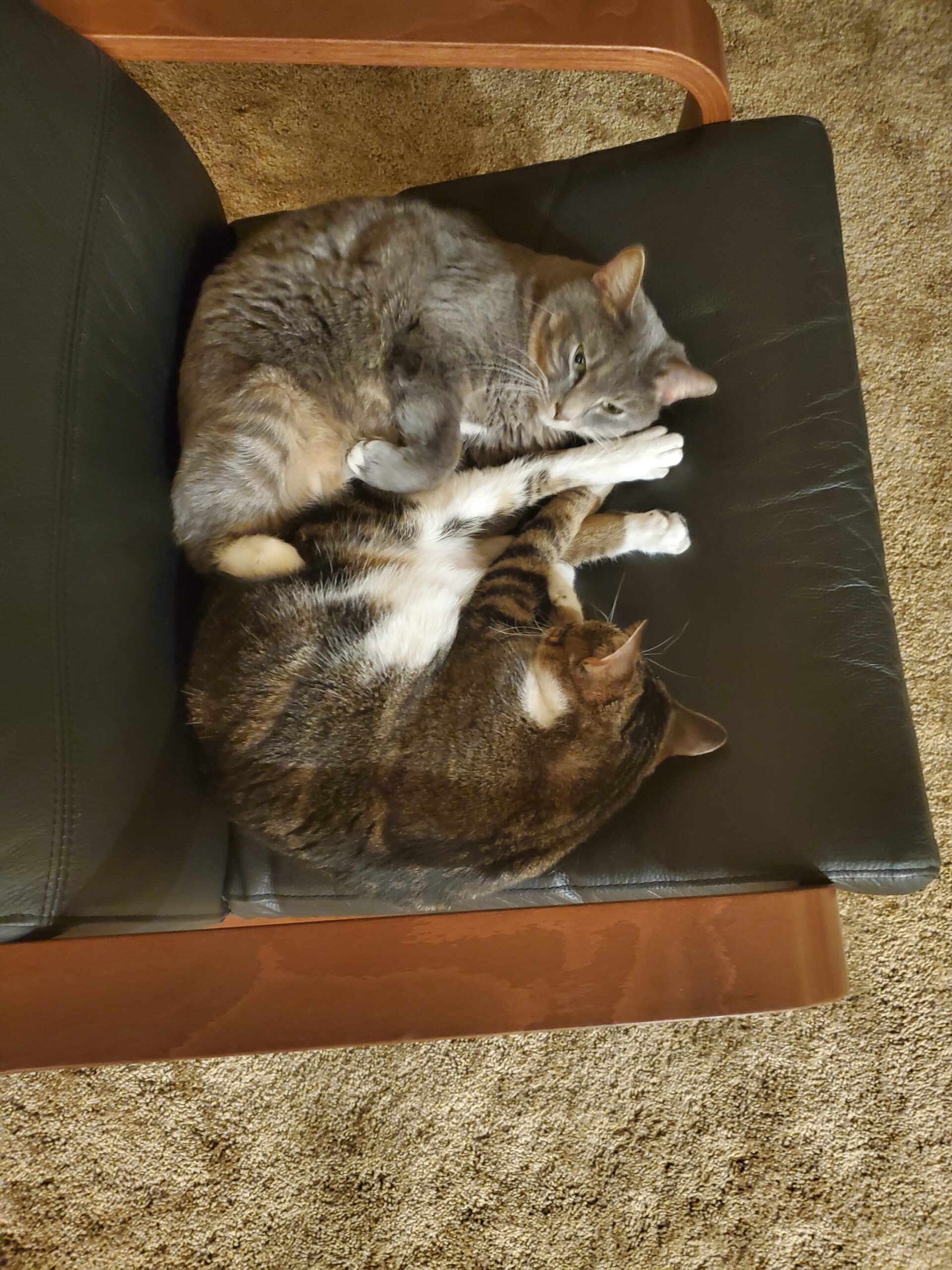 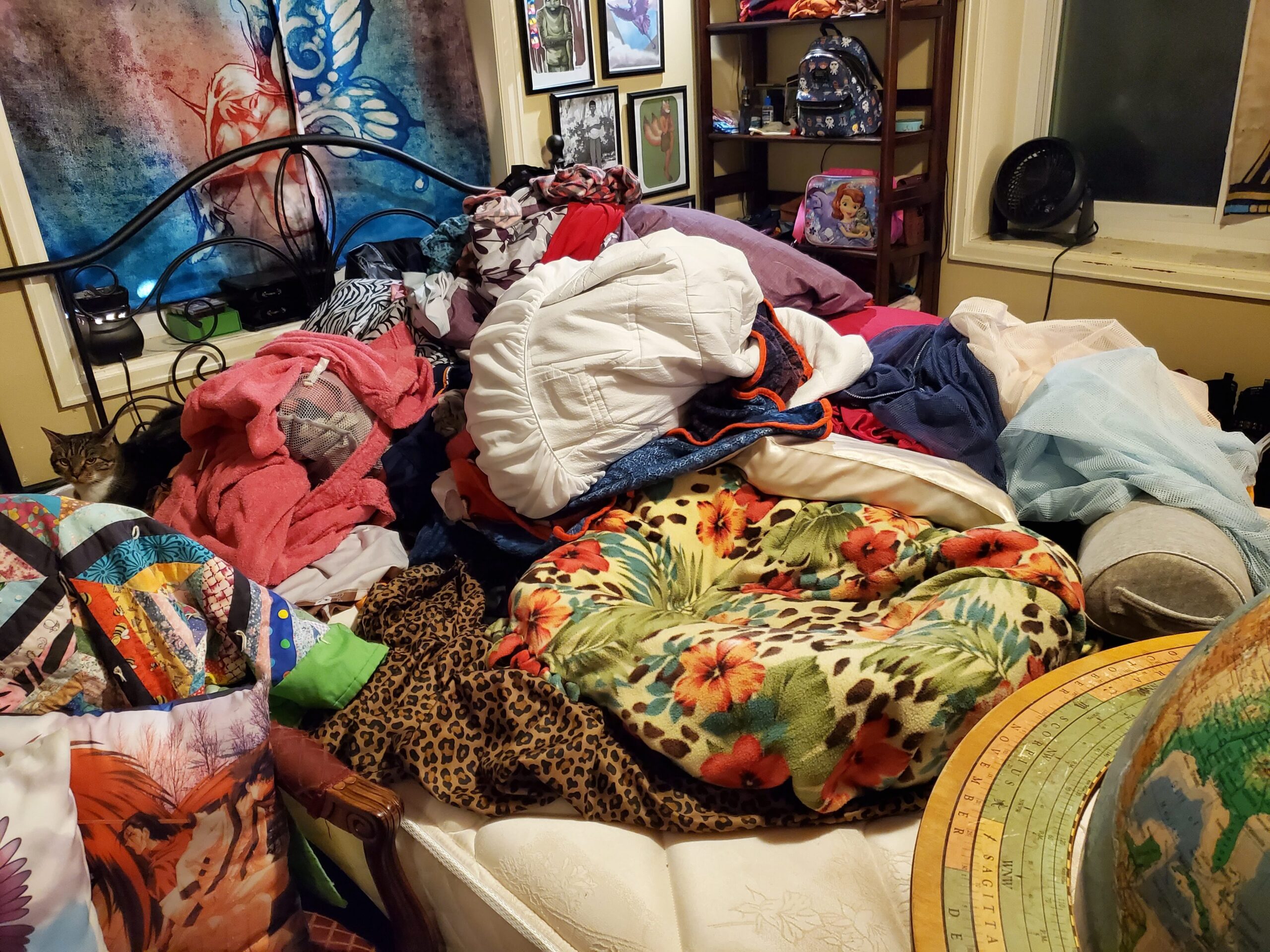 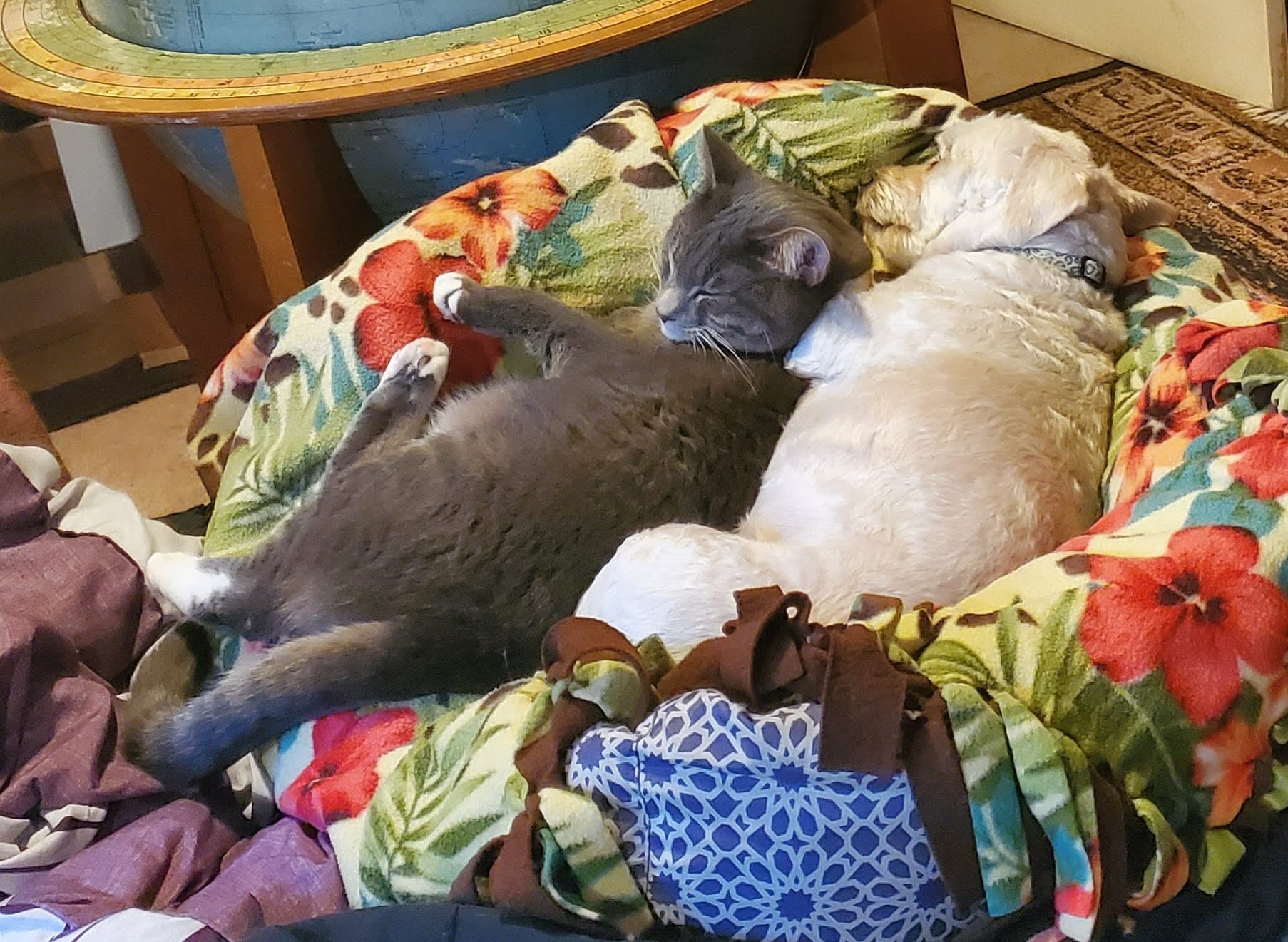 I just… I had to get a screenshot of this:

The revolution is coming.

I always keep an umbrella in the car with me when I’m out working, but for some reason it didn’t occur to me to bring it into Noodles where I was grabbing lunch. I and this other guy had both planned on taking our orders to go, but we both ate in the restaurant instead. Like, my car is just across the driveway in the first row of spots, but I still sat in the building for half an hour XD

OK, so I mostly do work for Shipt. Yes, the one that’s had so many protests and such lately over the transparency of its new pay model. Anyway, I reached my 500-orders milestone, and they sent me a prize! Guess what prize. A $10 Target gift card. XD. So I got some bleach and some dye. I like how the bleach box shows a picture of a mass of long hair and how well it’ll be bleached, because the amount of bleach in the box is enough for about a third of the hair I have, and mine isn’t even all that long right now. So then I went green. 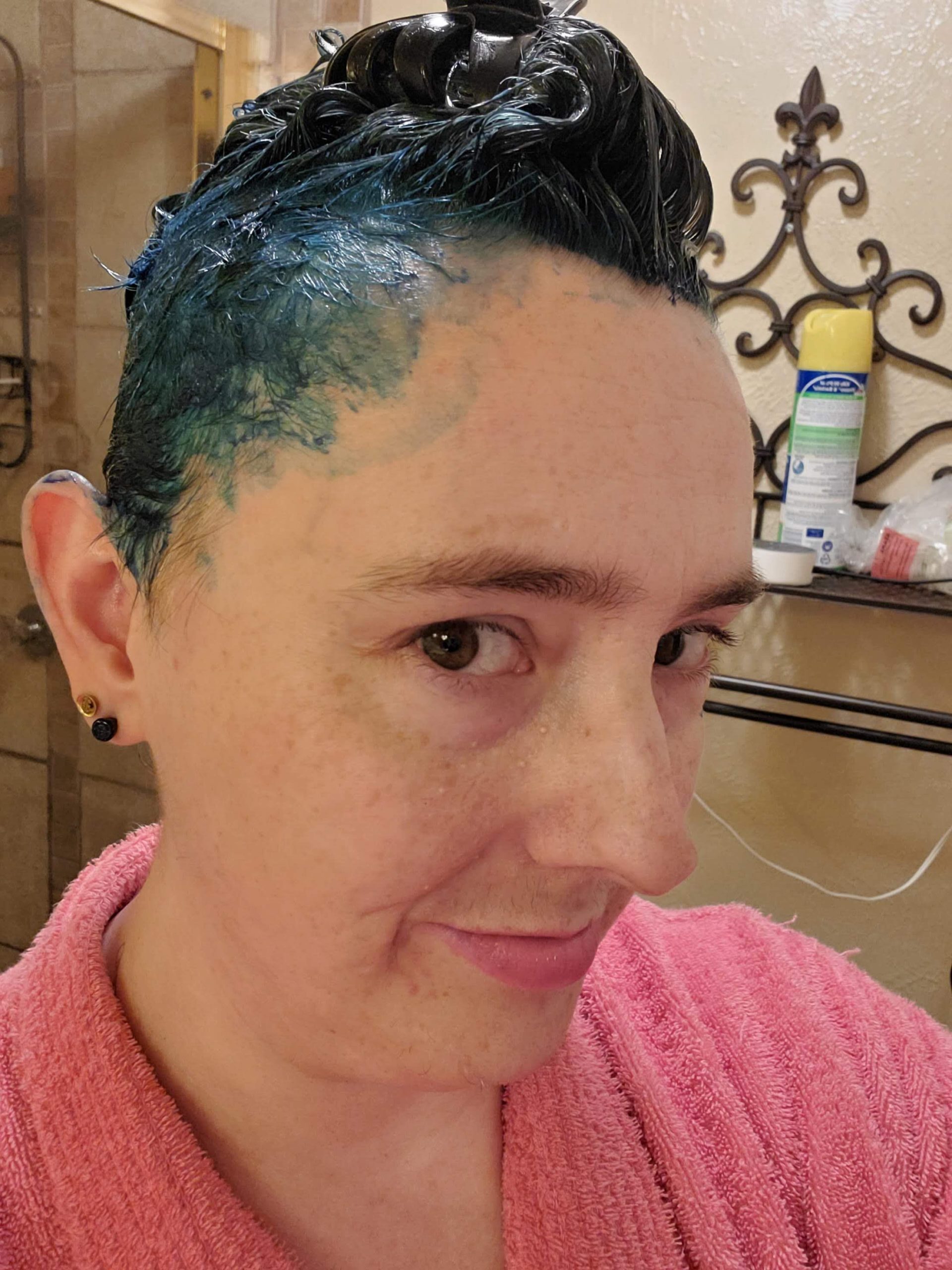 Good thing I took that picture during the process, or I would have missed that extremely obvious sideburn spot. 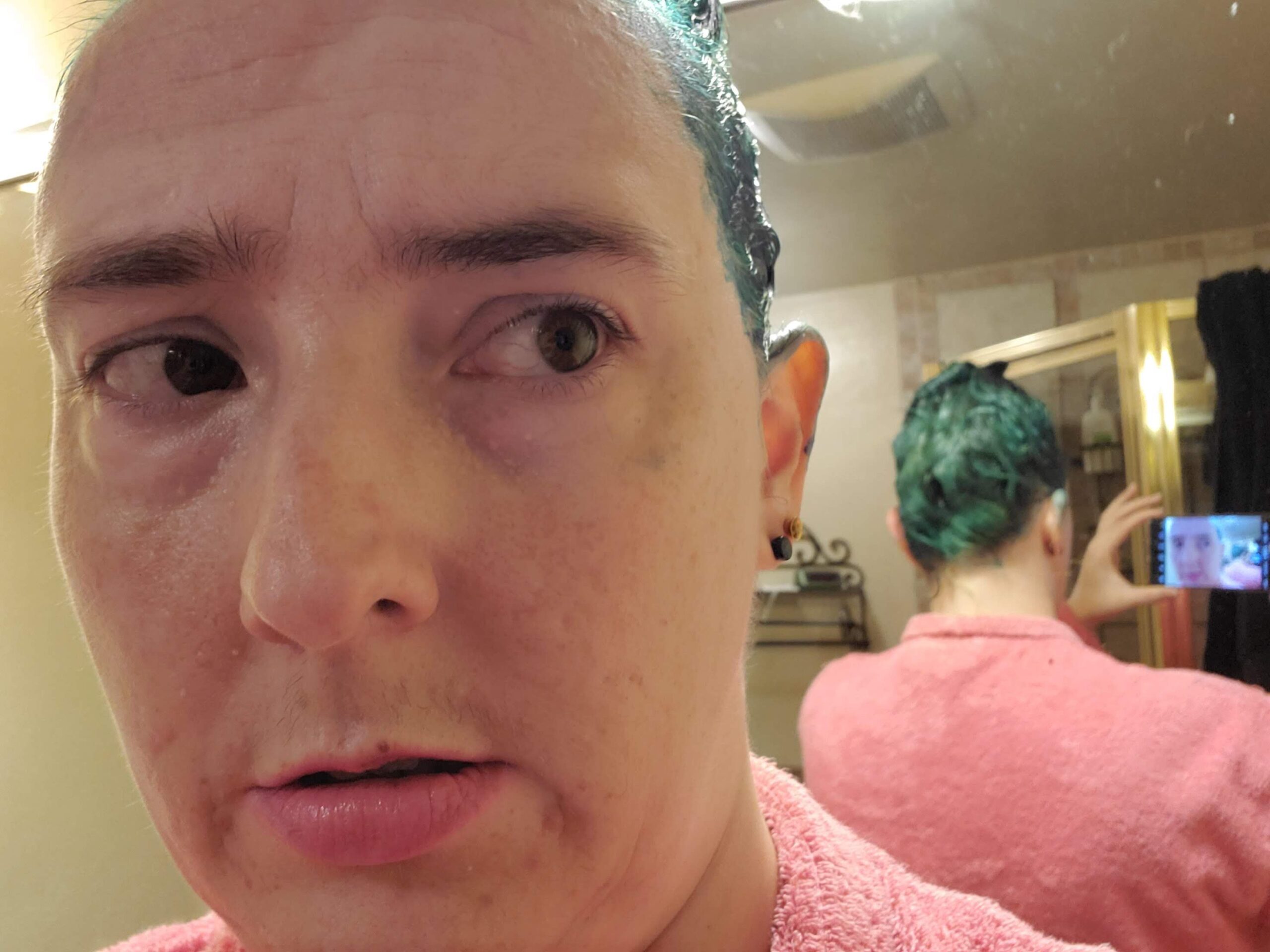 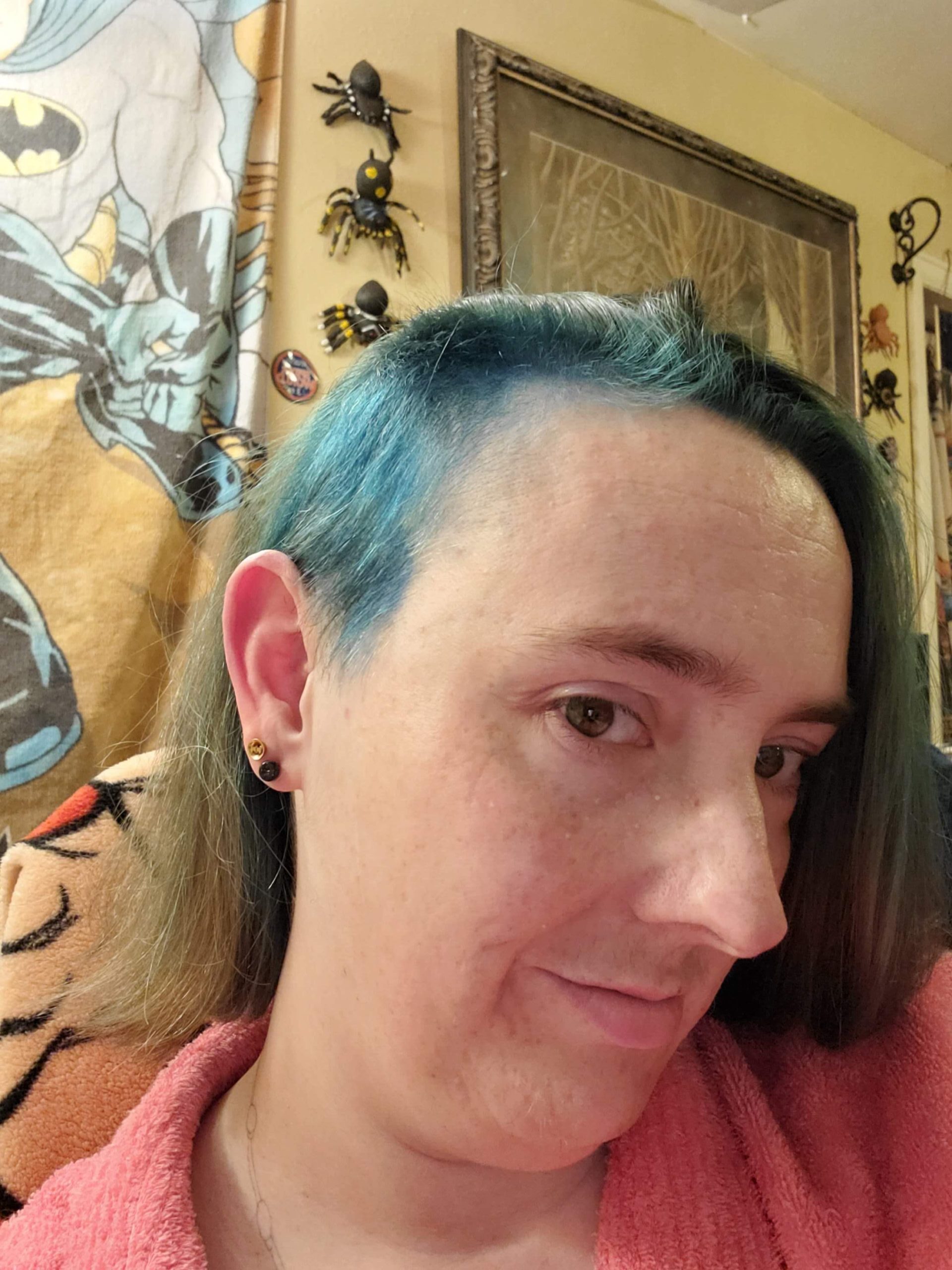 You can see that the core hair came out turquoise, while the lengths are a less intense yellow-green. You can also see that my shave desperately needs assistance. Lookit that damn cowlick up there standing at attention… 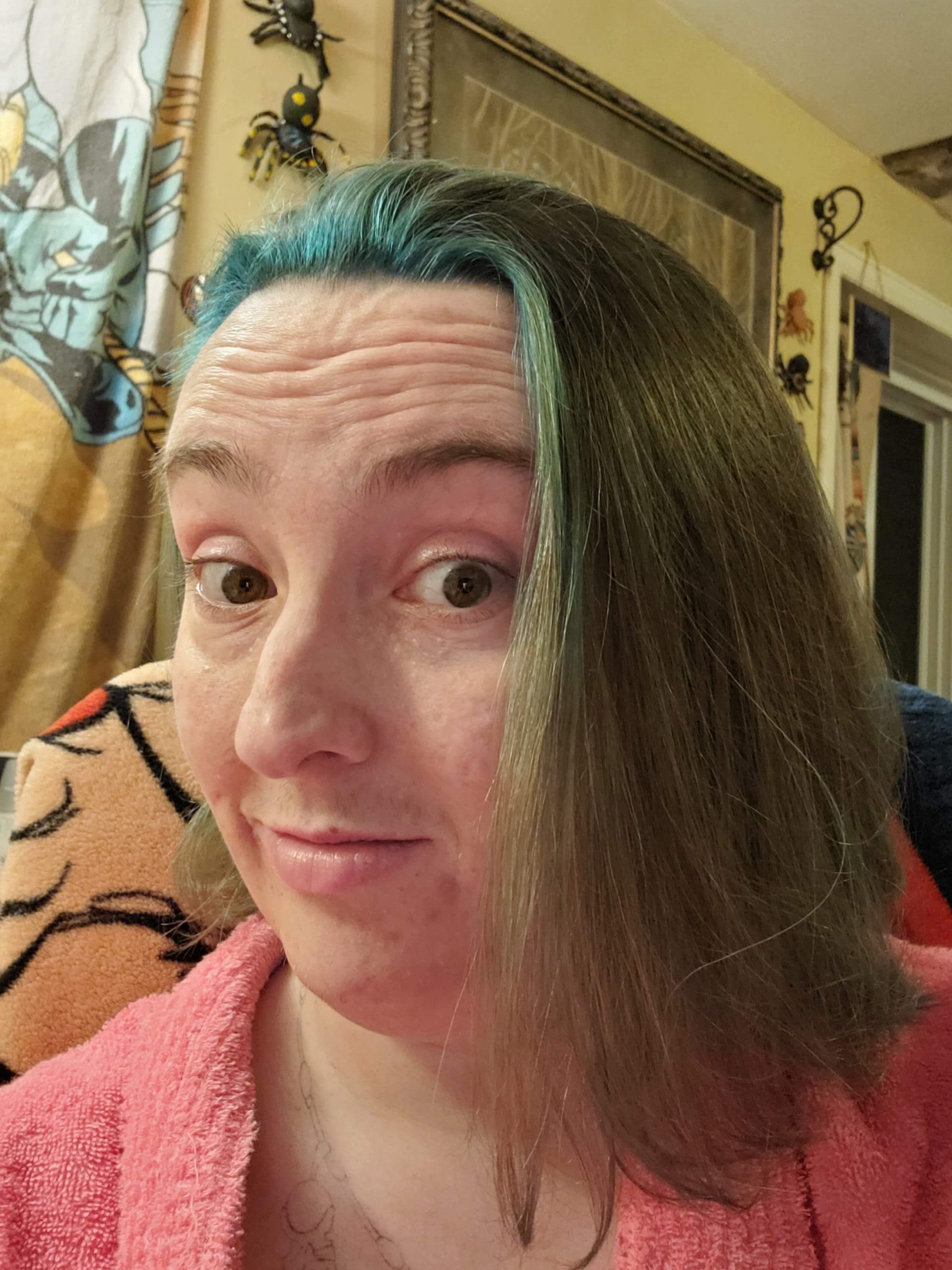 My facial shave needed a touch-up that day too XD 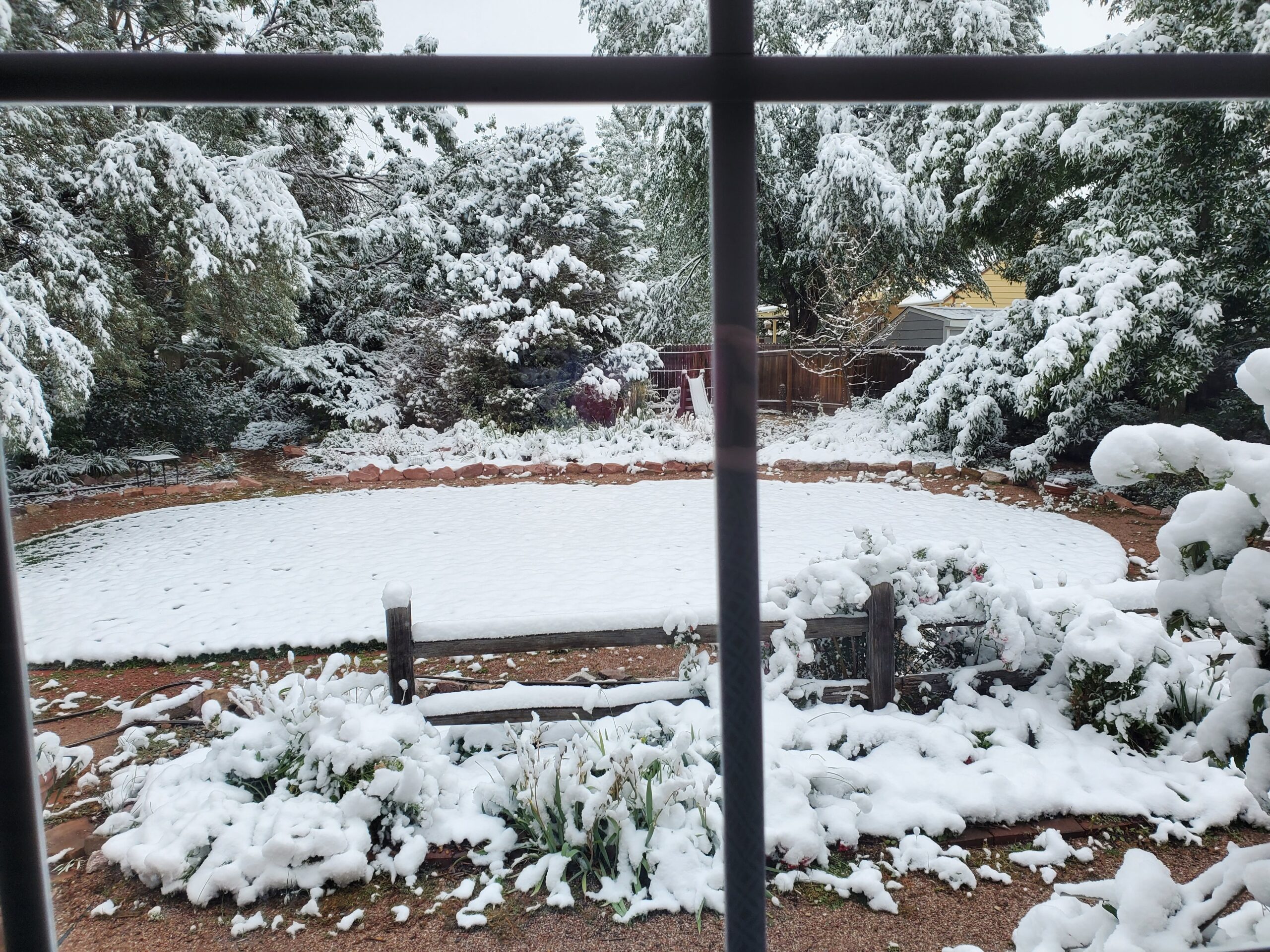 If I remember correctly, this was the second-earliest in white-people history we’ve ever had snow ’round hur. 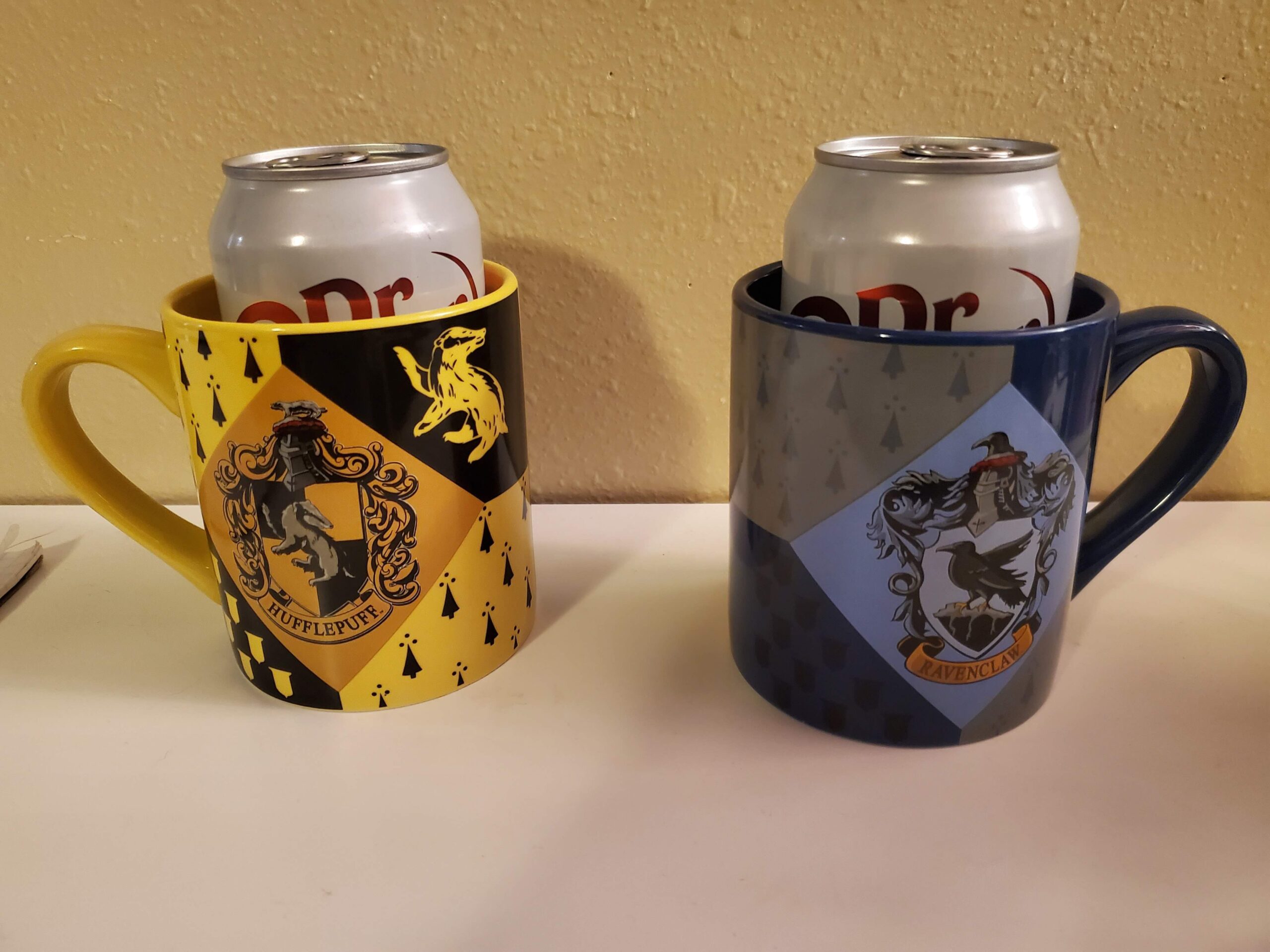 I have to admit, my birthday was disappointing this year. Such a big number, and pretty well no celebration. Couldn’t even finish my tattoo… But that sounds ungrateful, and I am very happy indeed that none of us have the virus yet, and for the presents I received from my kind family members!

I’m a (transgender-positive) Hufflepuff, of course, and brother is a Ravenclaw. He got me both cups just because they looked so cool. I happened to have two Dr. Peppers left at that time, so in they went!

One spider I want at Target:

It needs its legs detangled, but wouldn’t it look nice in an upper corner of a room?

Like, you can barely tell Suki is even there because Piper is so fat XD XD XD

This is the type of situation that initiates speaking in my dog:

Oh, Beeky. I think this is the best recording of him speaking I’ve ever gotten.

This is just the funniest dominance behavior I’ve ever seen. At least on my bed.

Another spider I want 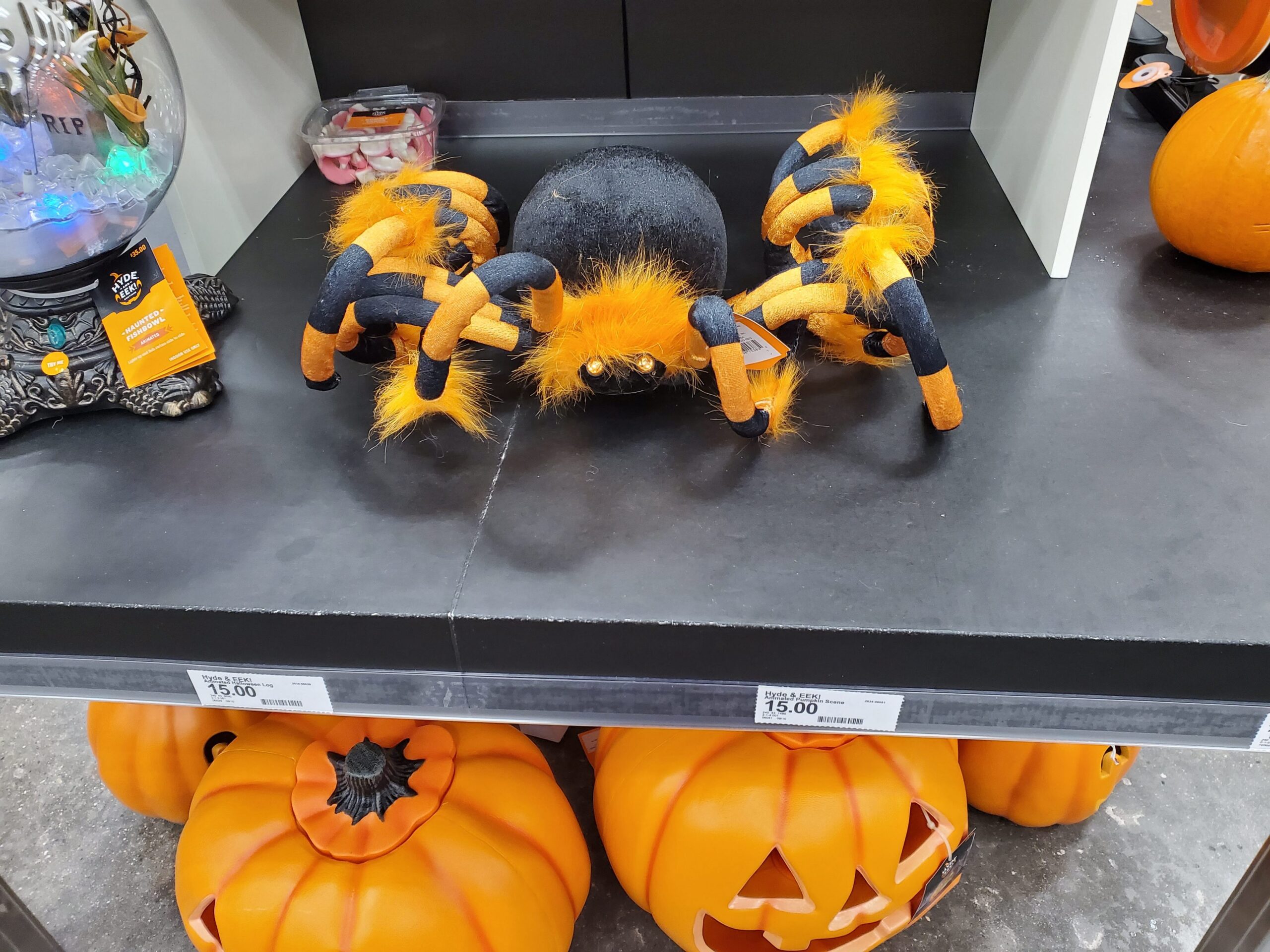 AAAAHHHHH SO CUTE THE CURLED LEGS AND STRIPES