Bringing this up to date to this very day! Embarrassing backlog remains, as usual, but still. Pleased with myself. 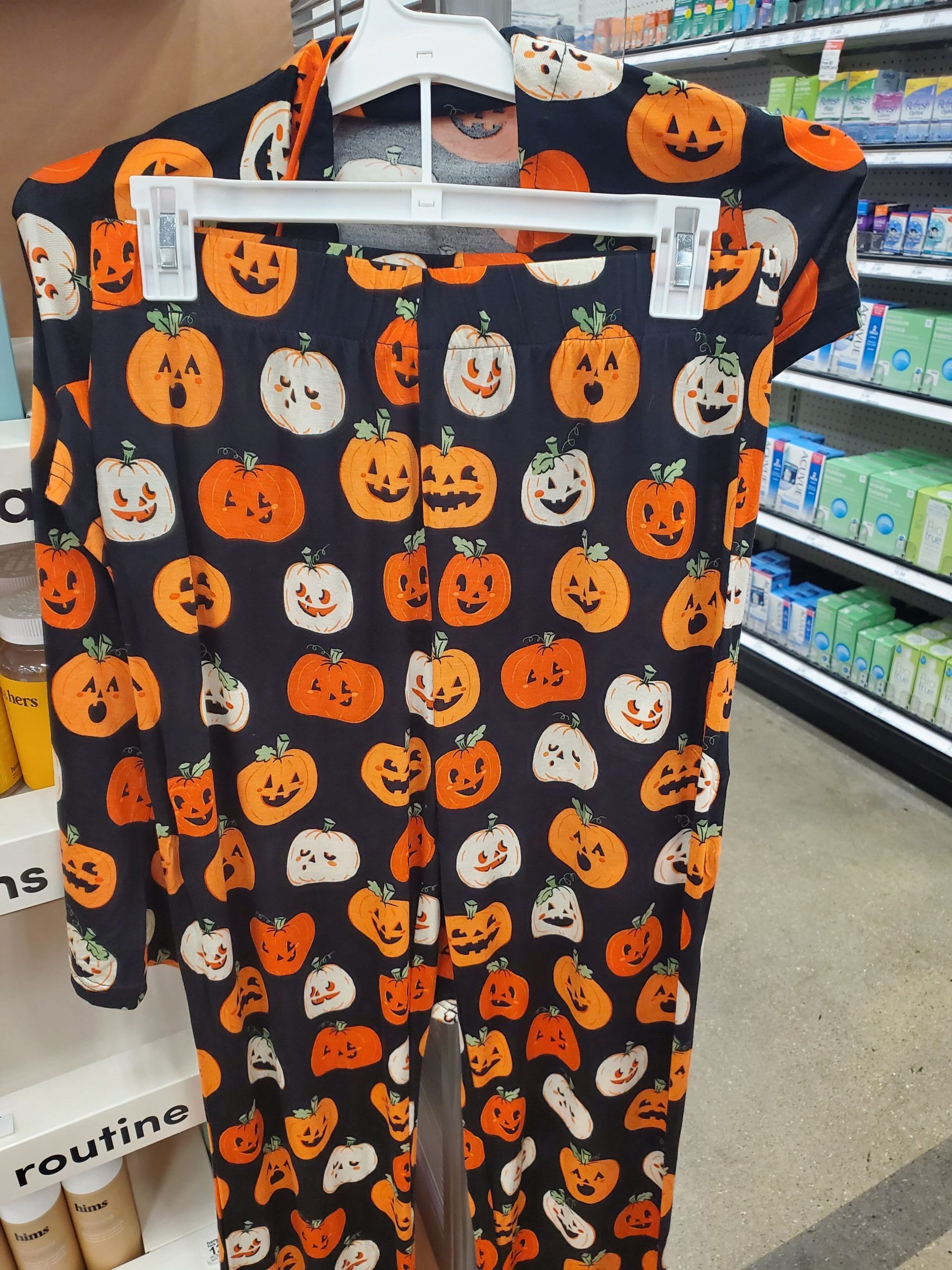 I found these adorable pajamas hanging randomly in the pharmacy at Target on a shelf full of lotion-infused socks and sensual massage gels. I had to take a picture mostly because they were so cute and I wanted them, but also because people “put things back” in the oddest places in grocery stores when they change their minds.

I’ve seen vans for this Smith Plumbing etc. company around town multiple times, but this was the first time I was able to get a picture: 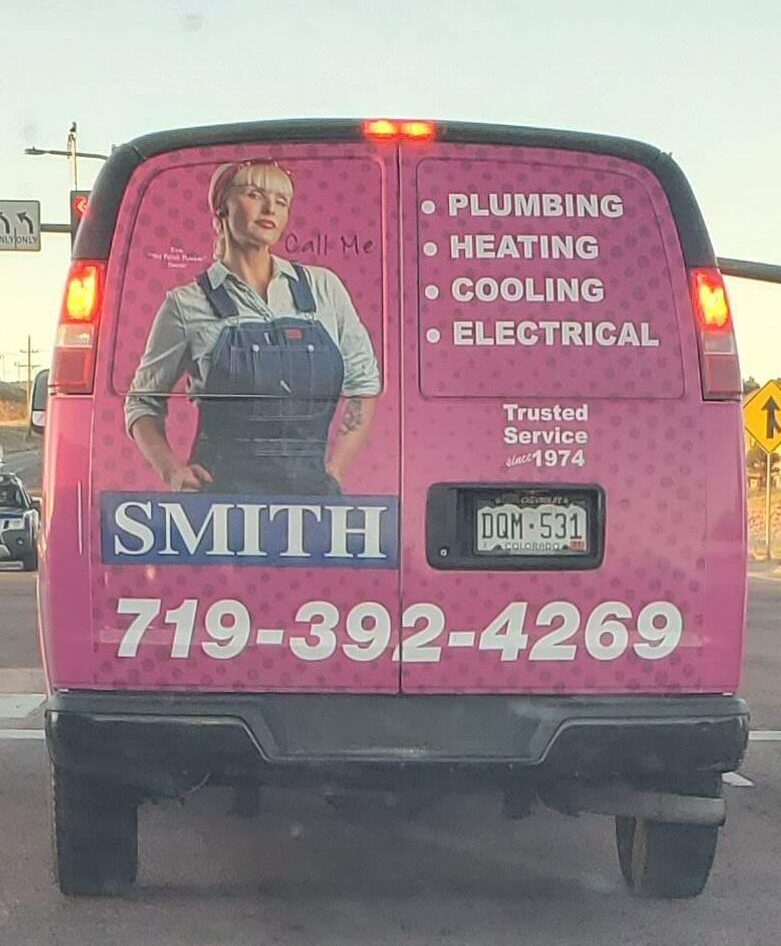 I just really like the lady. There’s attractiveness, flirtation, and an aura of competence about her that I approve of, and I love that she’s shown in very functional overalls on a pink background. Well done whoever thought up this image!

Somebody gave this mannequin at Target a companion or decoration: 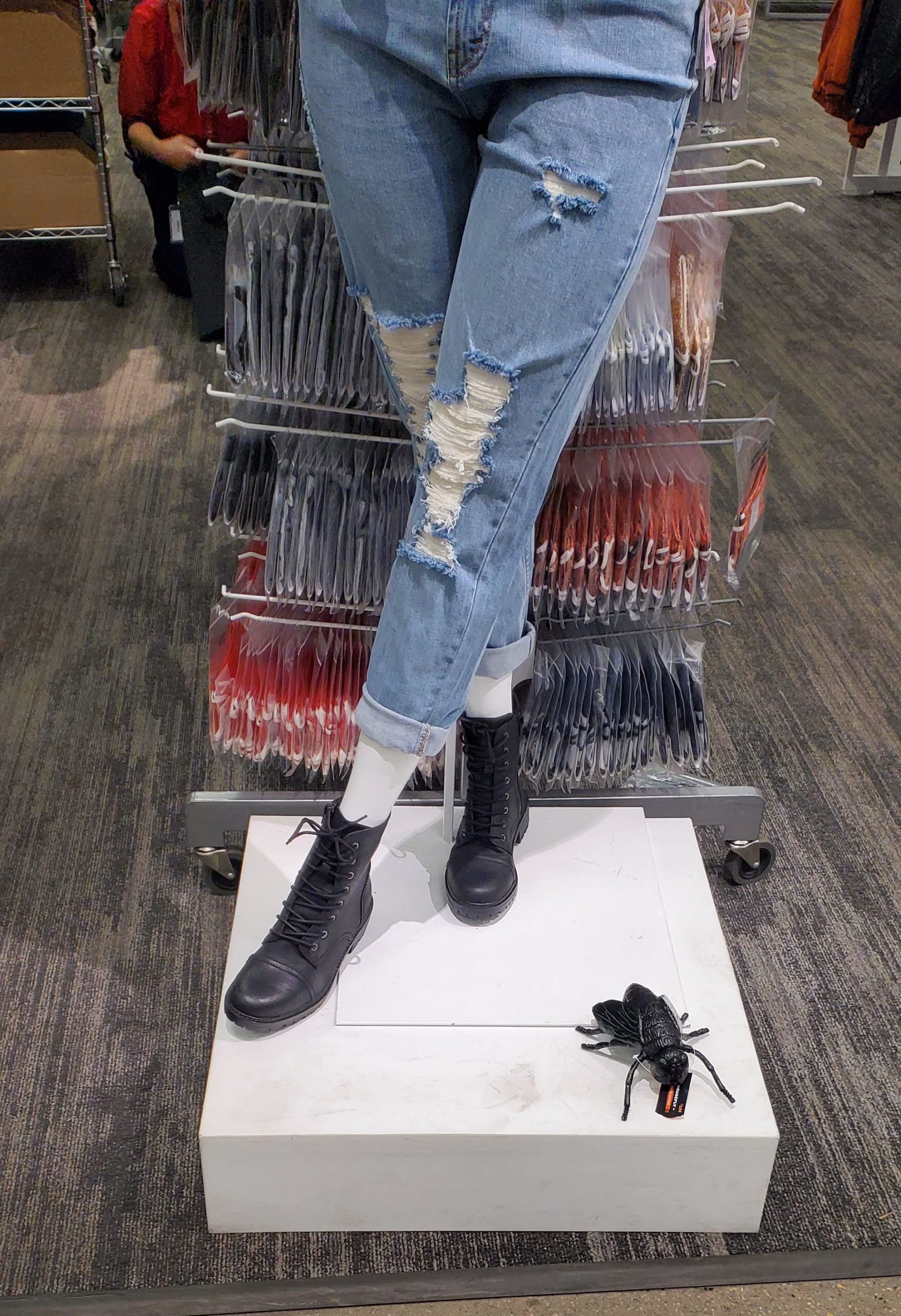 And here is yet another spider at Target that I wanted: 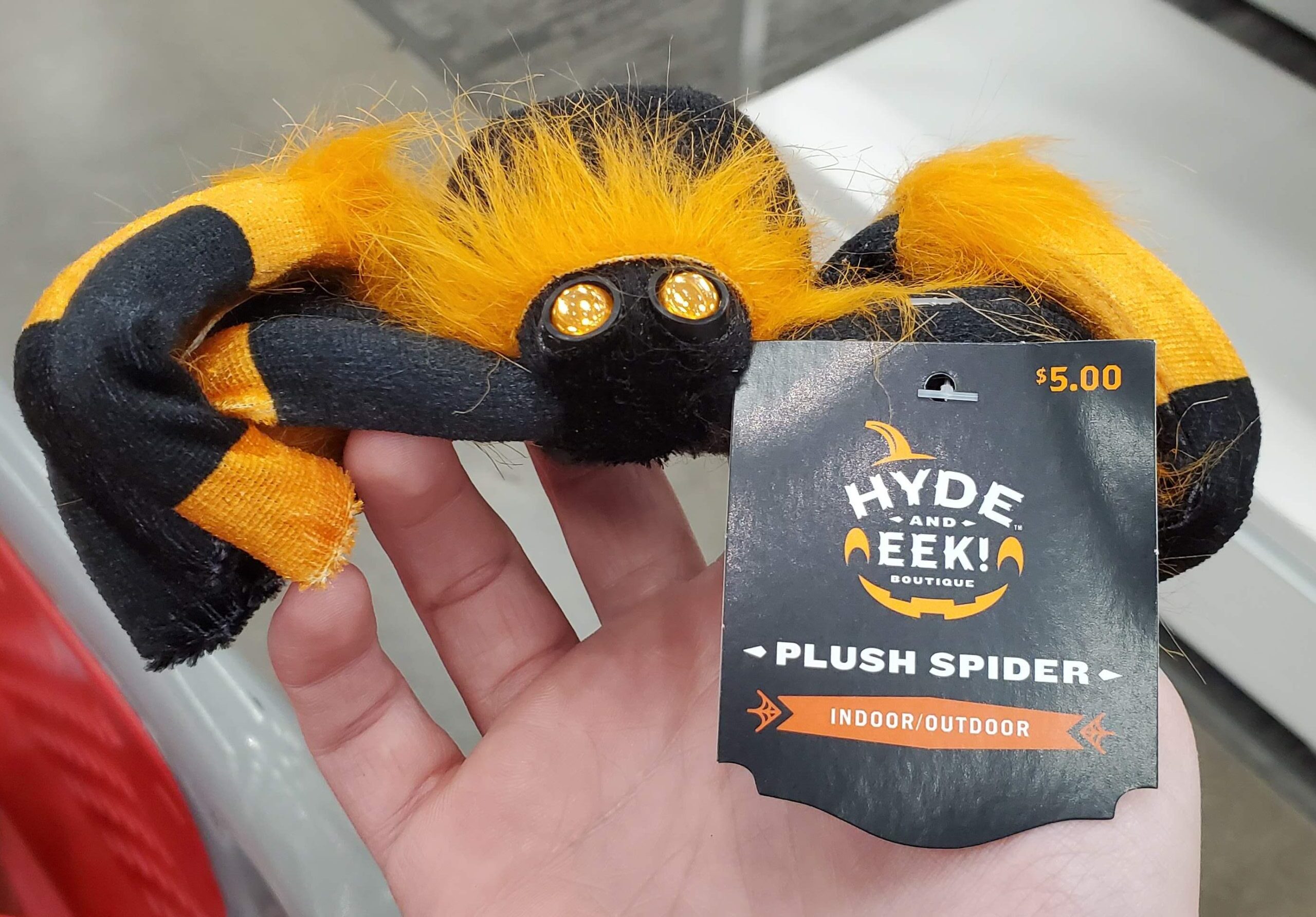 So I spent the entire month of October, and some of November, suffering severe abdominal pains that prevented me from working almost all of that time. At home I wasn’t much more productive: I played ACNH and Skyrim, slept, watched some stuff, and went on a DC comics binge. I barely wrote anything, and a drawing I did the lineart for just at the end of September is still sitting around uncolored. I was basically a very painful vegetable. And here are the pictures I took during that time! 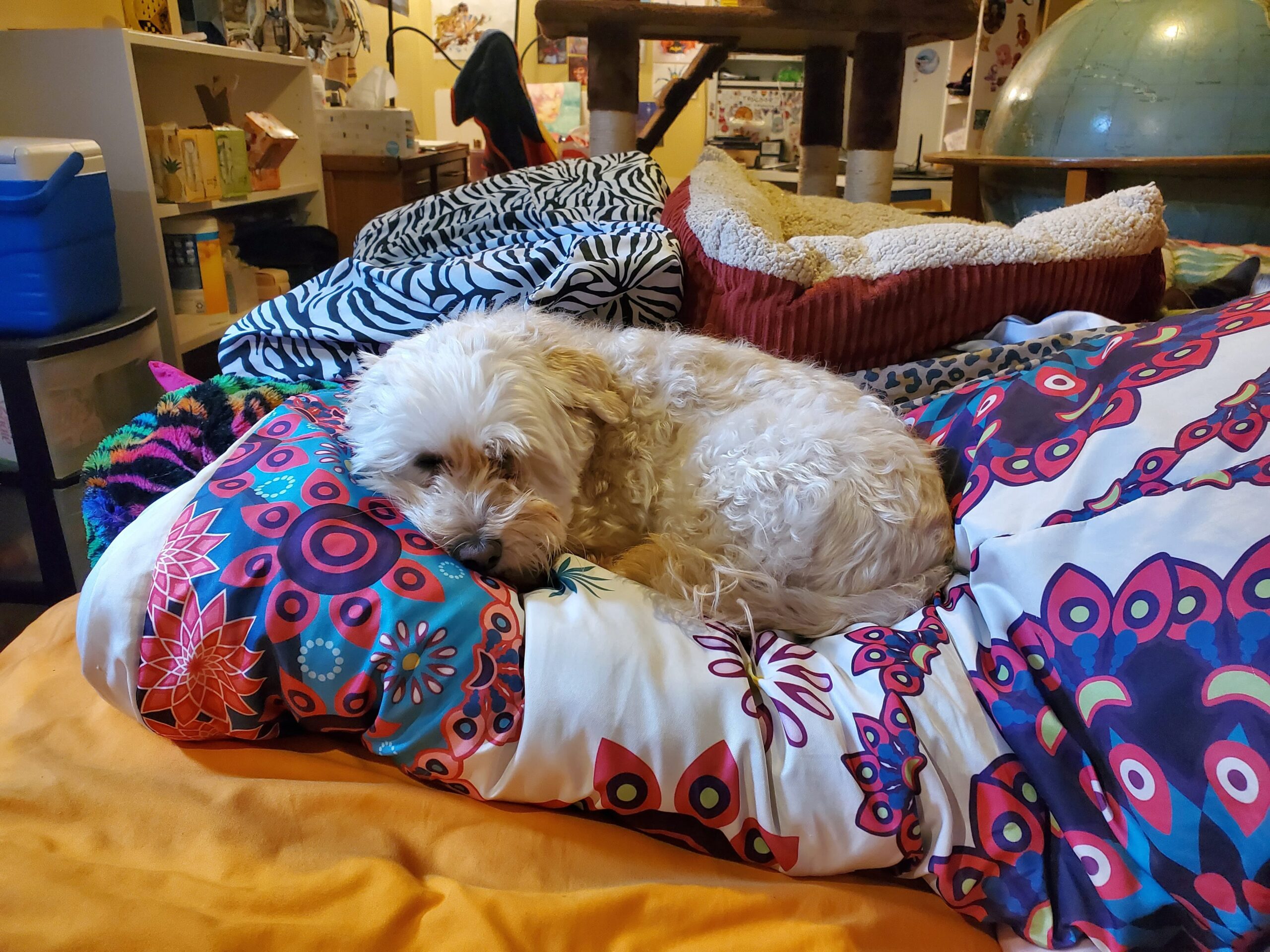 I only got the next two shots in order to make jokes at my family about names on the ballot: 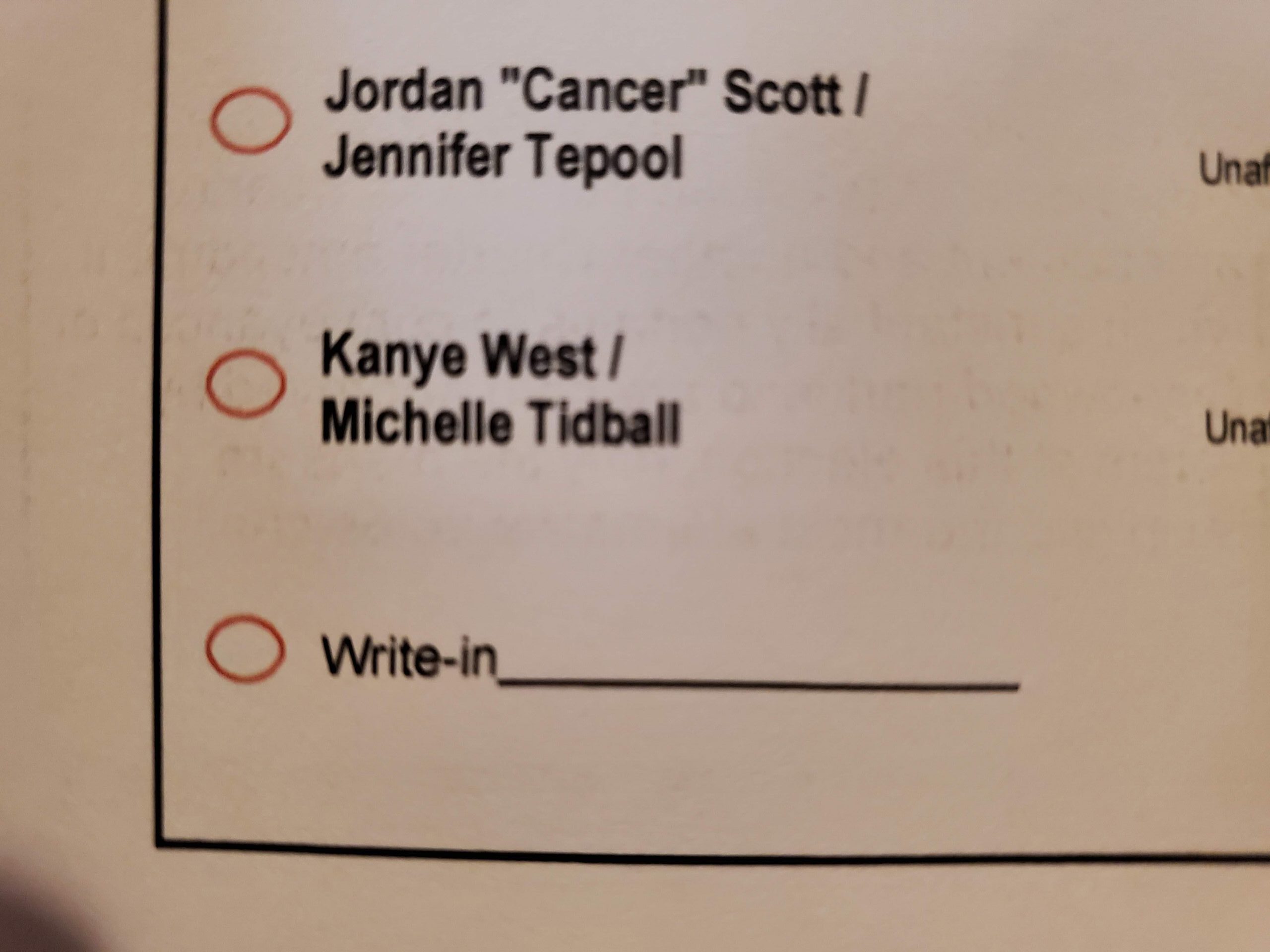 Ballot entries I’d rather have for president than Donald Trump: the real actual Kanye West, cancer. 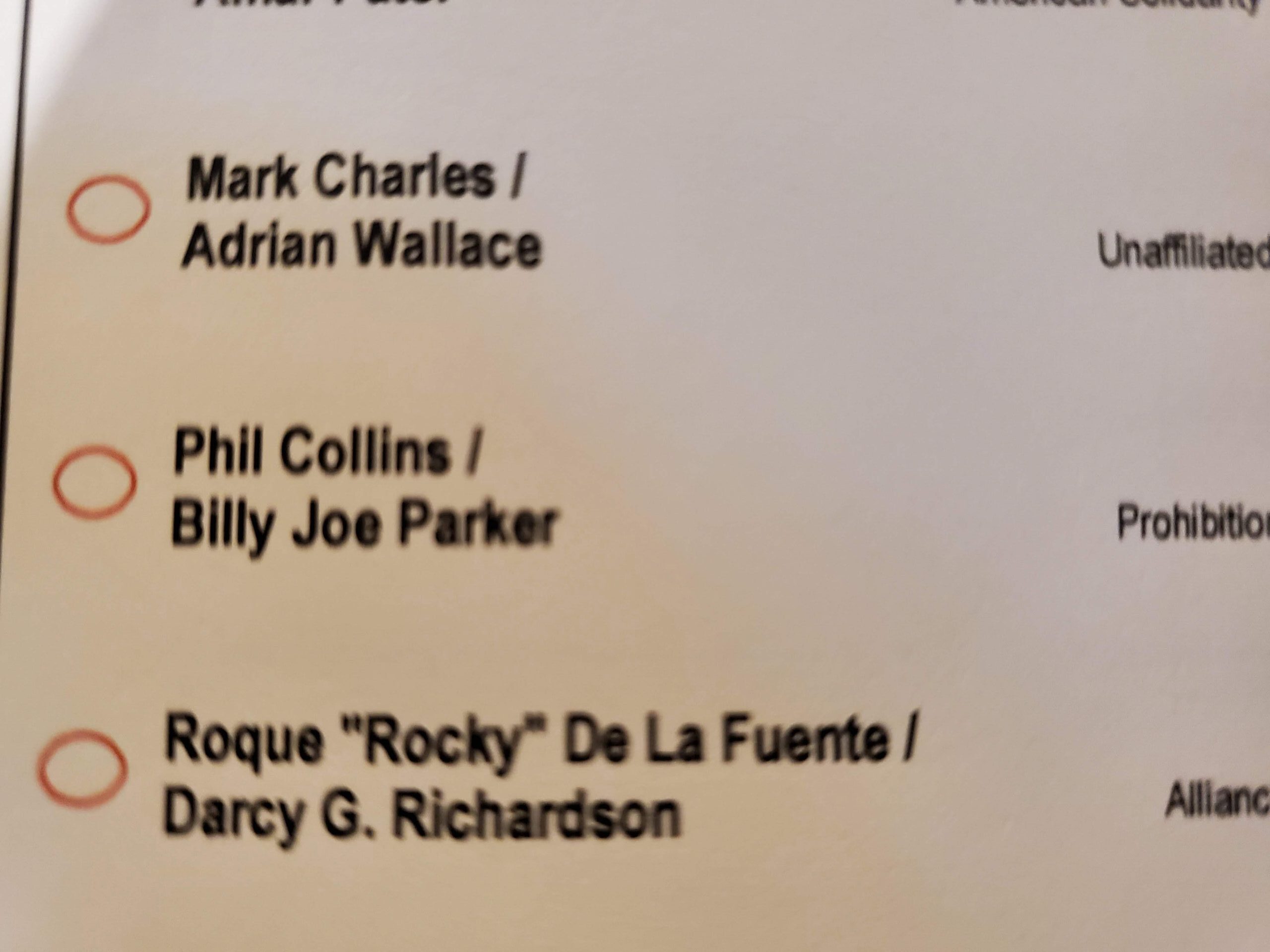 (This one’s based on a family inside joke, which I’m too tired at the moment to explain.) When someone asks you if you want Phil Collins for president, you say, ‘Yeah.’ 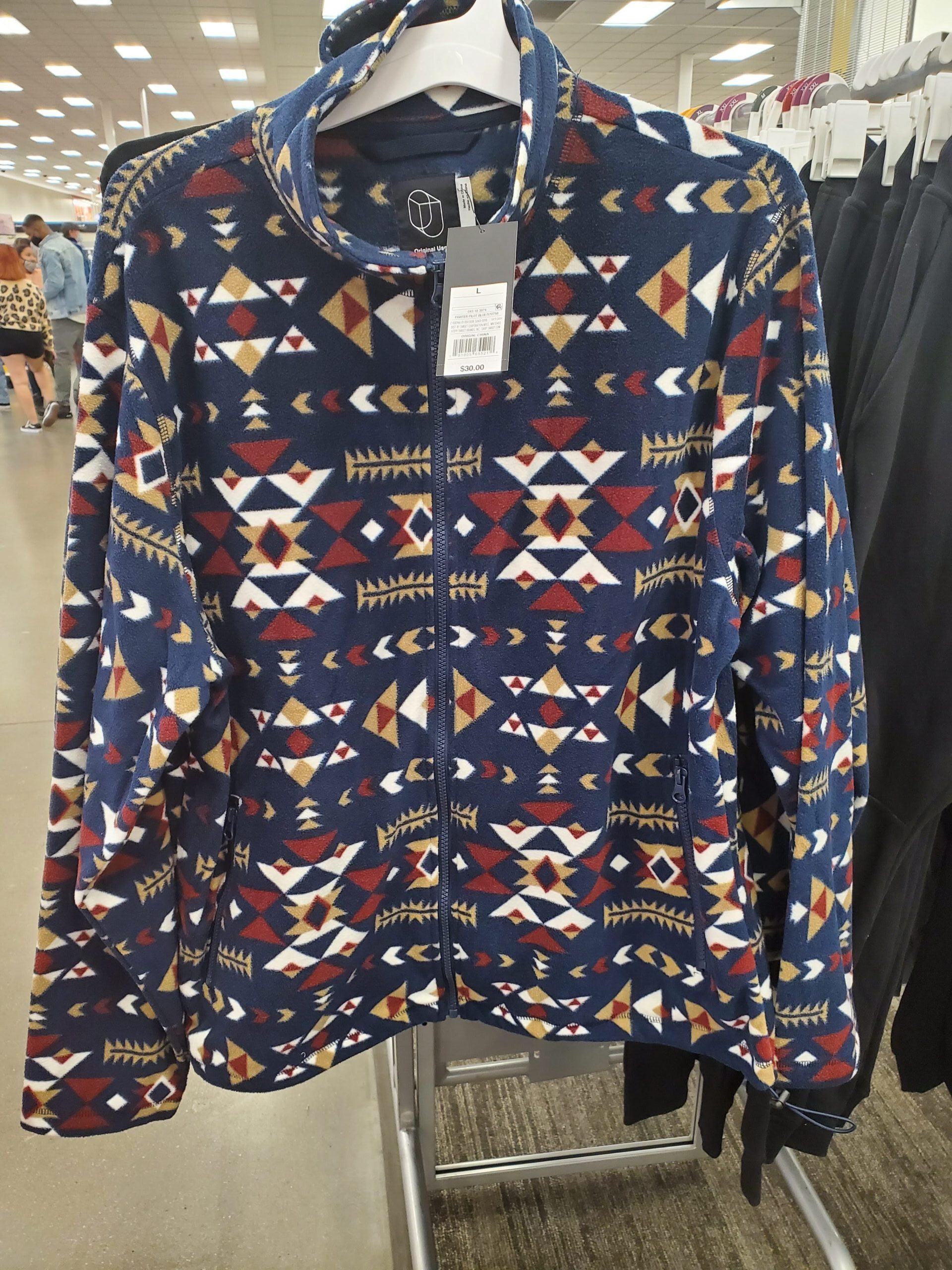 –because I saw this cute jacket at Target and took a picture of it because I wanted it.

Here are two pictures that tell a story: 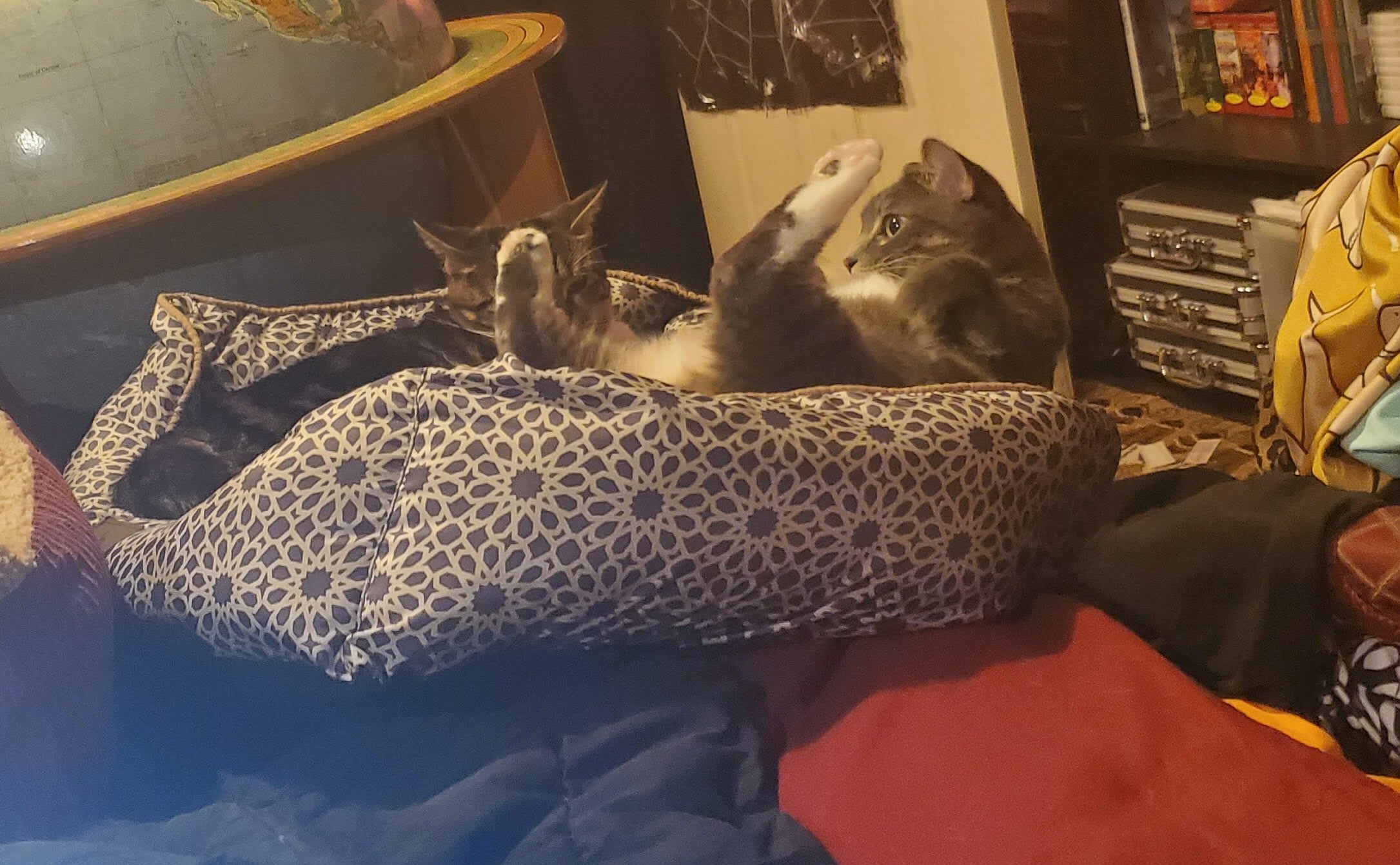 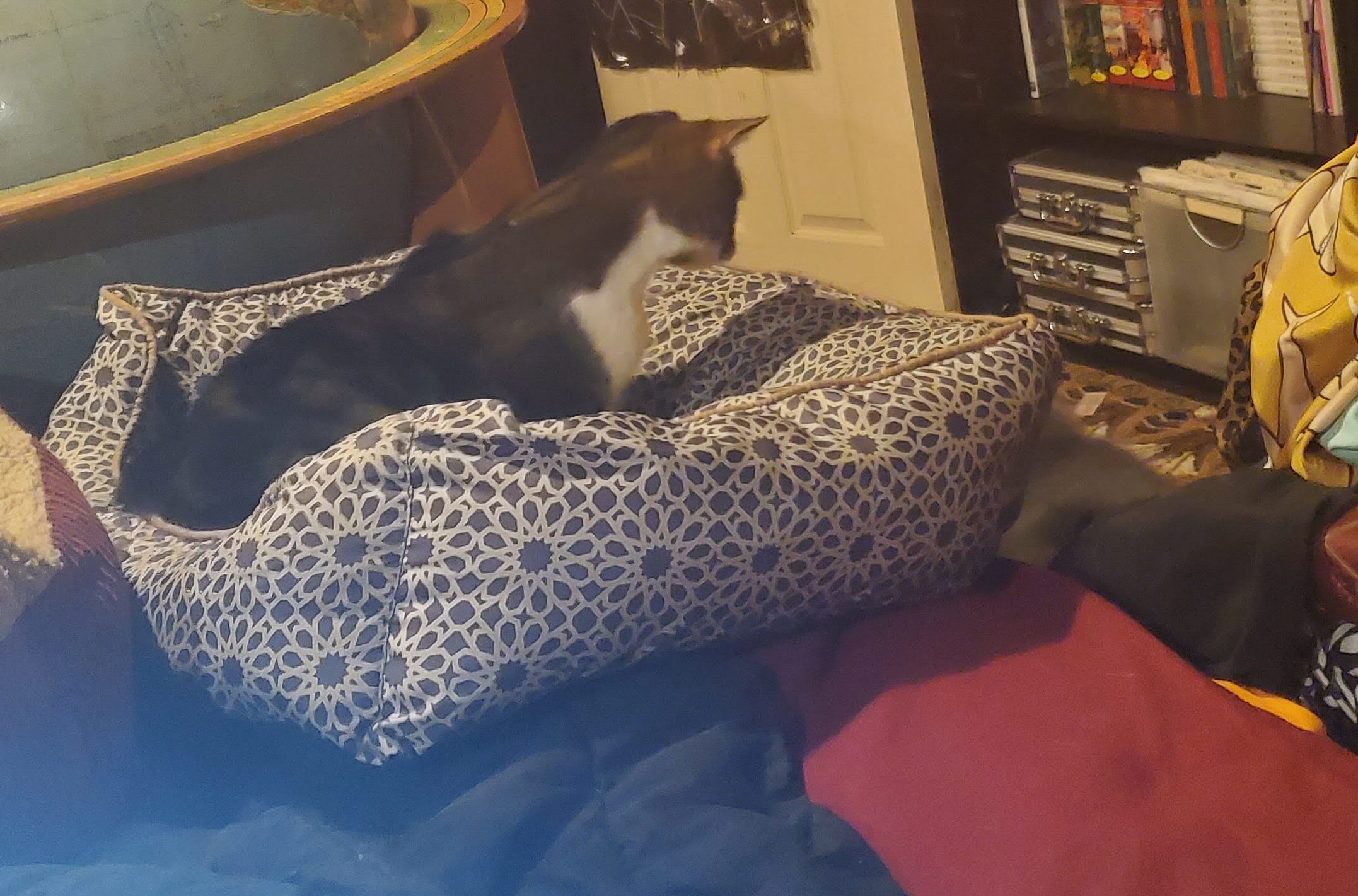 Little Animals doin’ a cuddle on the couch in the rec room while brother and I watch something: 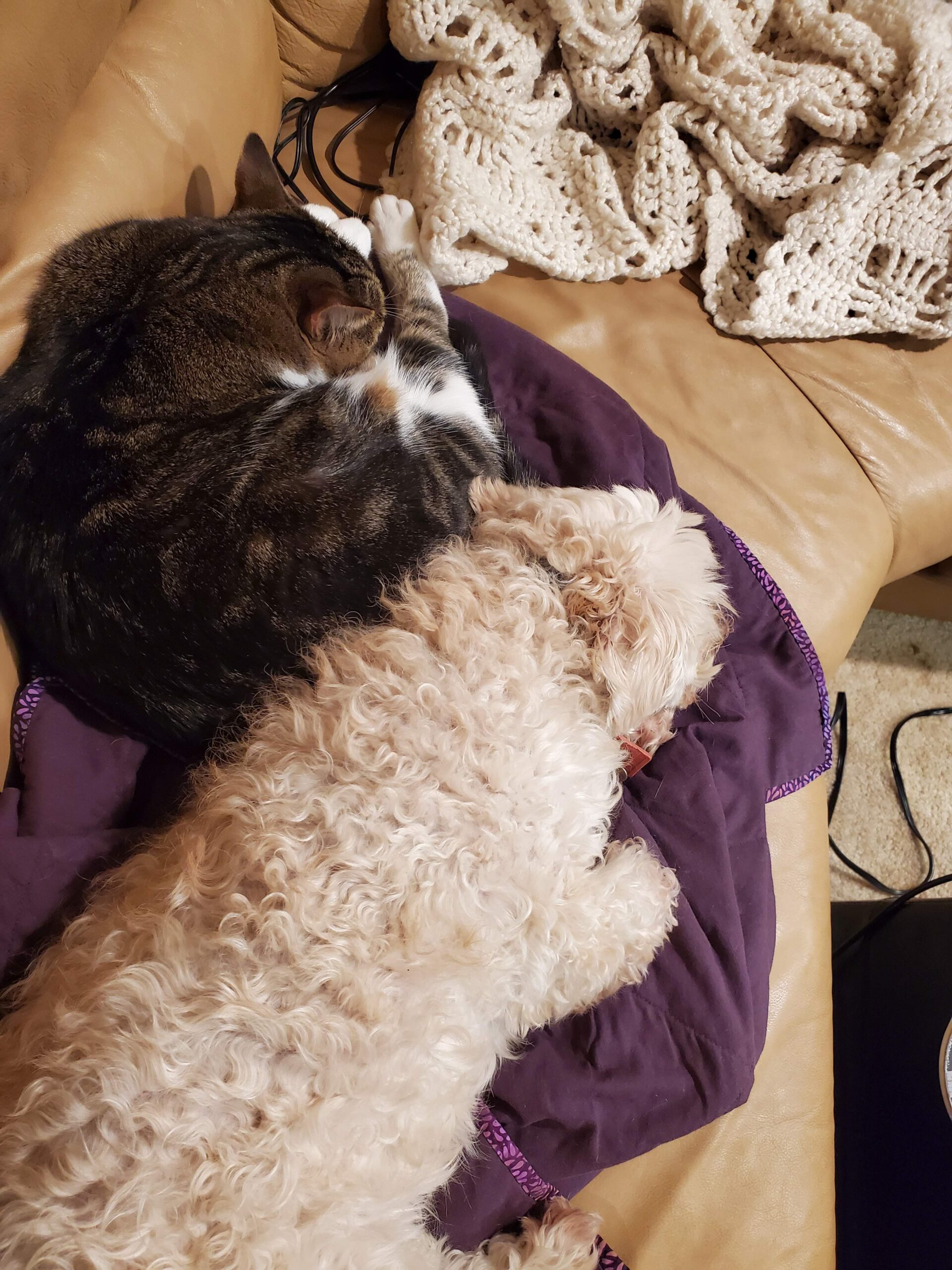 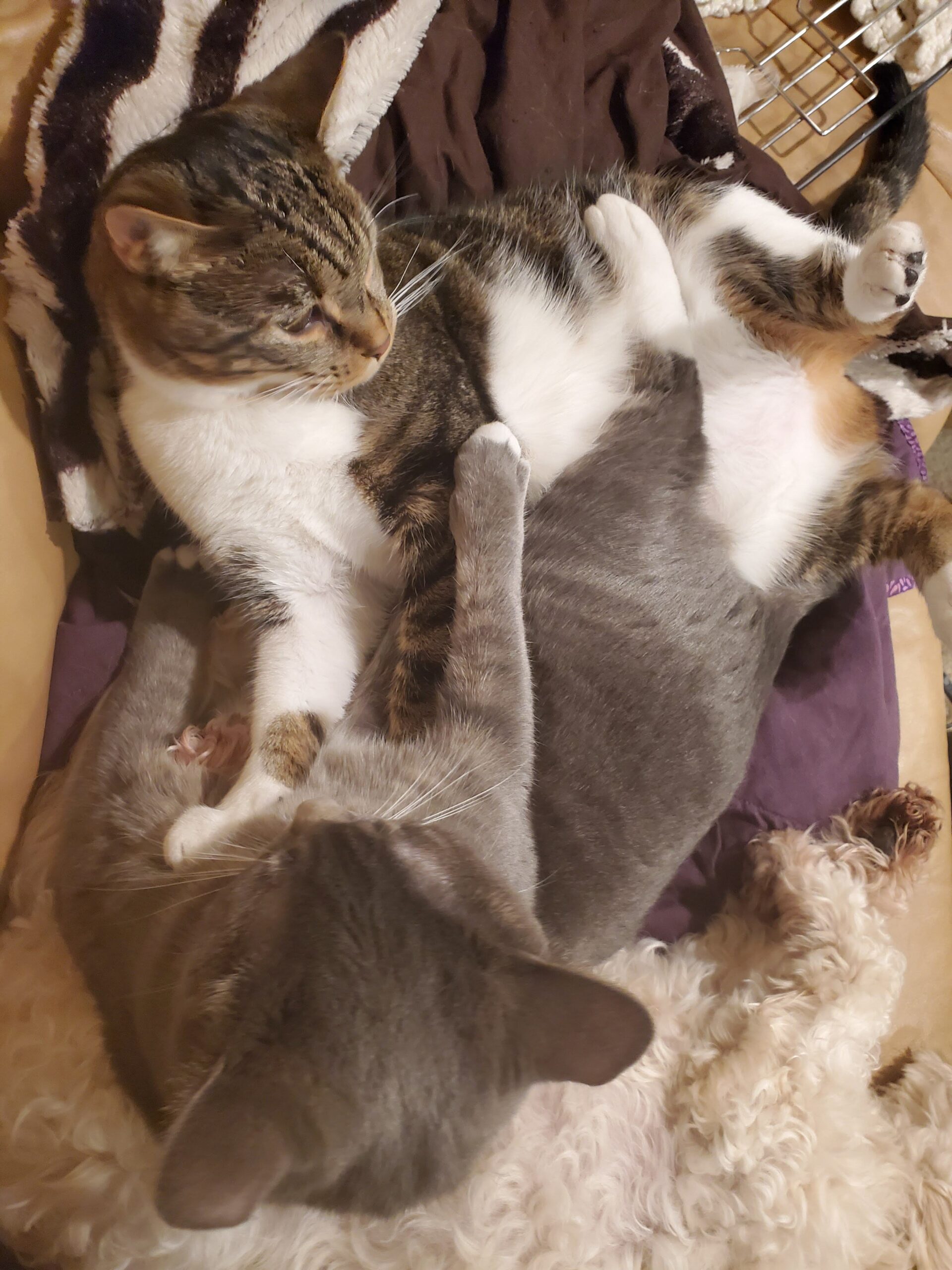 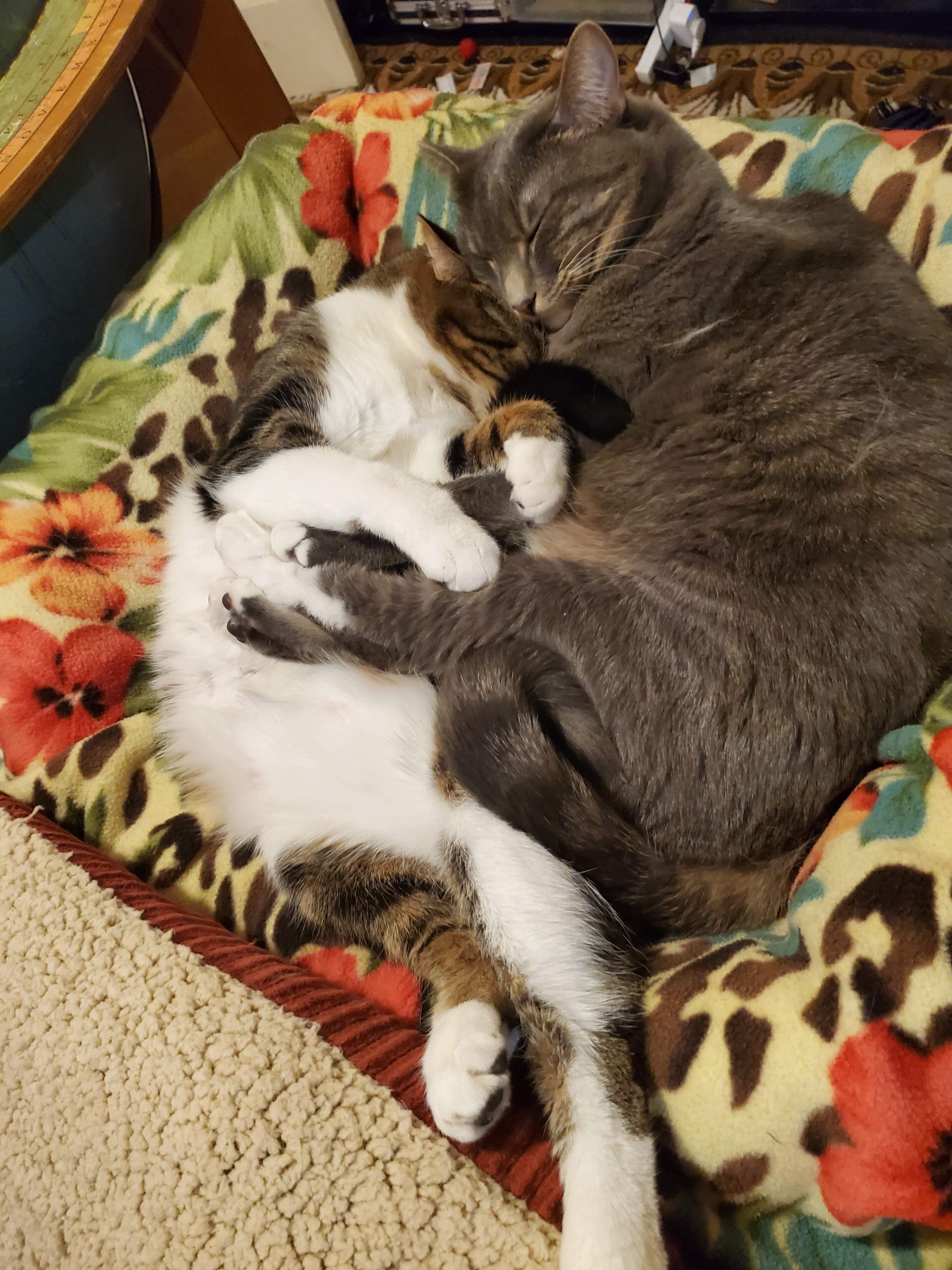 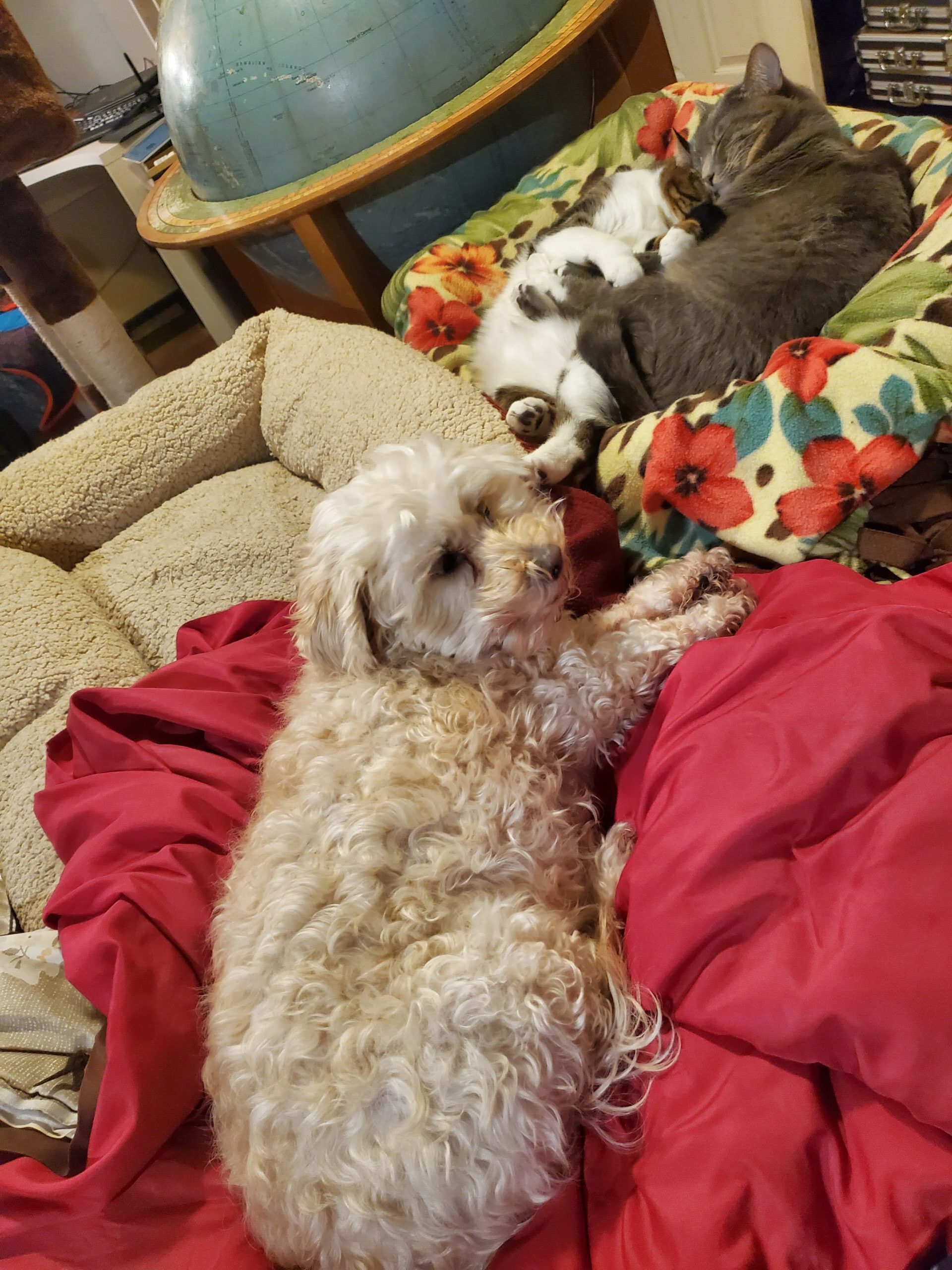 On Halloween, I actually felt fairly OK. My mom had the brilliant idea of using one of the low windows that opens onto the front porch as a kind of fast-food window, because a tray with candy on would just fit partially through it and allow for a relatively contactless trick-or-treating experience. So I sat in the front room reading comics and handing out candy in this manner. I wore this outfit again:

In case you’ve forgotten or never seen the first time I wore it, this is my low-key cosplay of BtAS Joker. This time I had somewhat green hair and red lipstick and everything! Also, no, I never have washed the full-length selfie mirror. But I had fun on Halloween.

When reading Golden Age comics, it’s very difficult not to screenshot constantly and send it to everyone until they want to stab me any time a name ending in “man” comes up. It’s absolutely impossible not to keep up a running verbal commentary, wherever I happen to be, but at least I often happen to be alone. And this time I limited myself to only two screenshots:

That’s Superman in disguise, and he’s carrying five dudes. That panel made me laugh so hard. 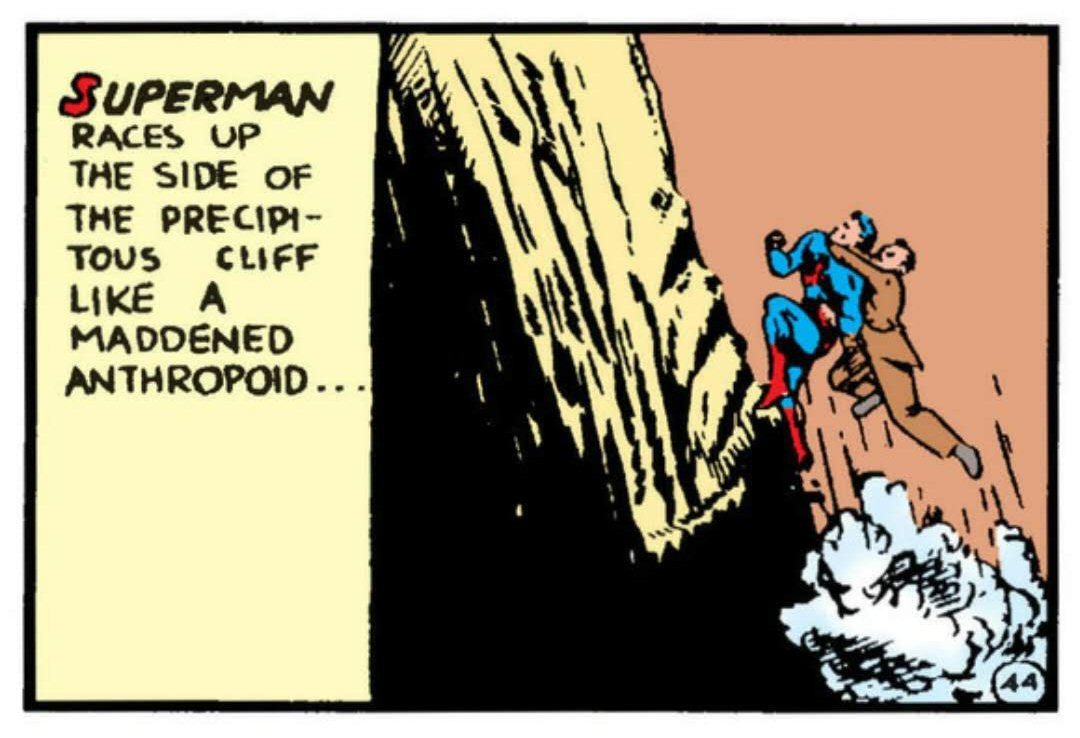 But I laughed harder at this one. What the actual.

I won’t go into gross medical details, but my badass doctor came up with a solution for the abdominal pains, and by this point I was a lot better. She also recently put me on a thyroid med after my annual bloodwork (which keeps happening more often than once a year, because I have issues, but whatever). And my health has been steadily improving until, in the last week or so, I’ve had little more than the normal pains at normal levels, and a surprising amount of energy. So naturally I’ve gone back to work. 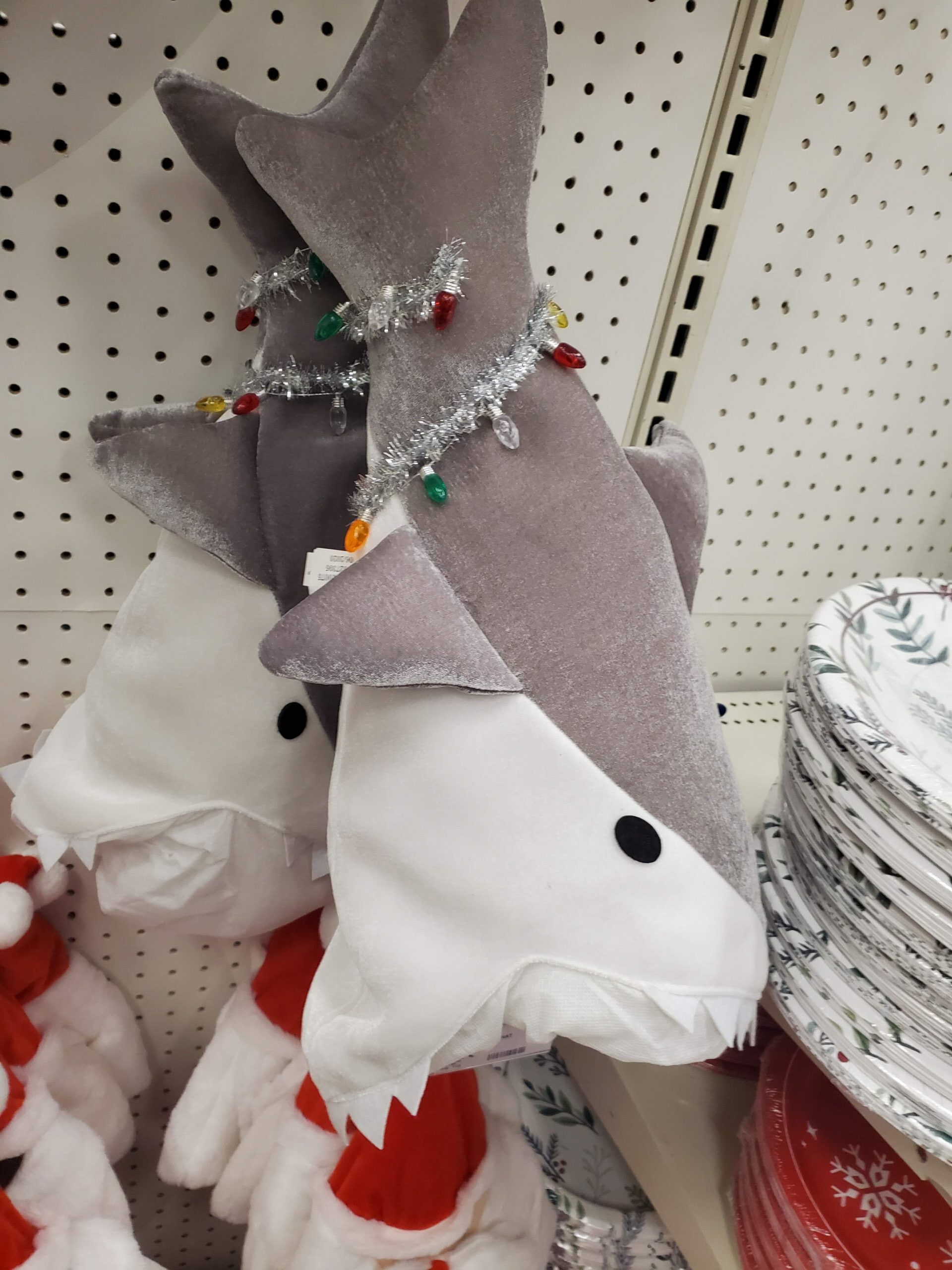 Supposedly this is a Christmas hat. I’m pretty sure it’s a ‘hat’ developed for general consumption that someone just attached some little fake lights to in order to squeeze another few cents out of the gullible public by marketing it at Christmas. That said, I think it’s hilarious. I kinda want to buy one and just hang it on the wall.

Speaking of hats. I was wearing my cute witch hat the other day, as you can see here: 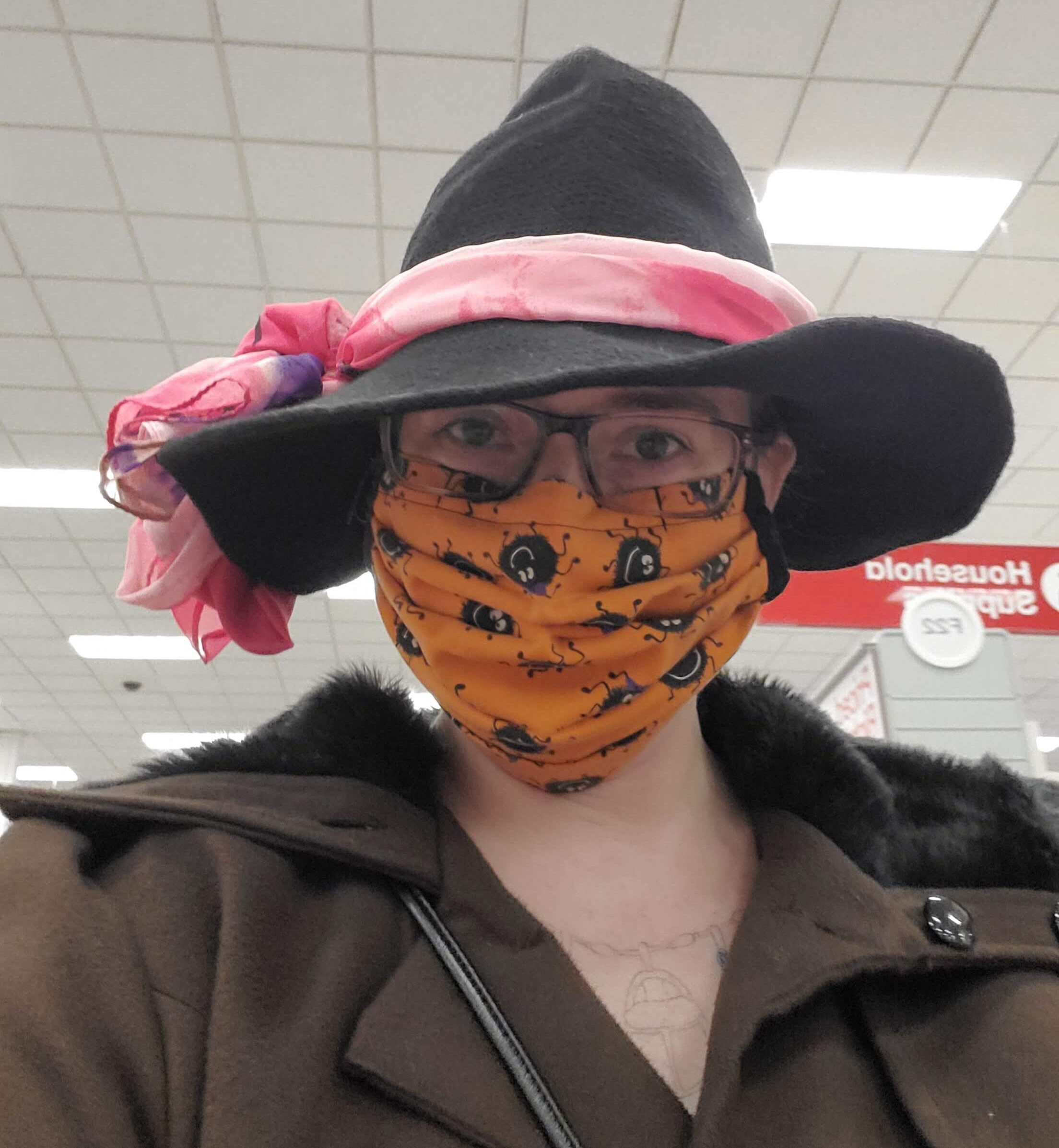 This girl (young enough not to be wearing a mask, even though I disapprove) saw me and commented to her dad that there was a witch! Then she called out to me, “Witch!” But when I turned and looked at her, she gave a little shriek. Then she turned to look back at me several times as they walked away. It was hella cute. Adults have a tendency to laugh (and not even expend much effort trying to hide it) when they see my witch hat, but kids’ reactions are priceless.

It’s getting to be that time of year when I can make a lot of money, which is awesome because I am severely in debt (and staying home for yet another month certainly didn’t help) and student loan payments start up again in January unless someone in the government does something economically irresponsible (PLEASE DO IT).

I even scraped up enough for a haircut at last. These first three shots are fresh out of the shower and therefore without glasses: 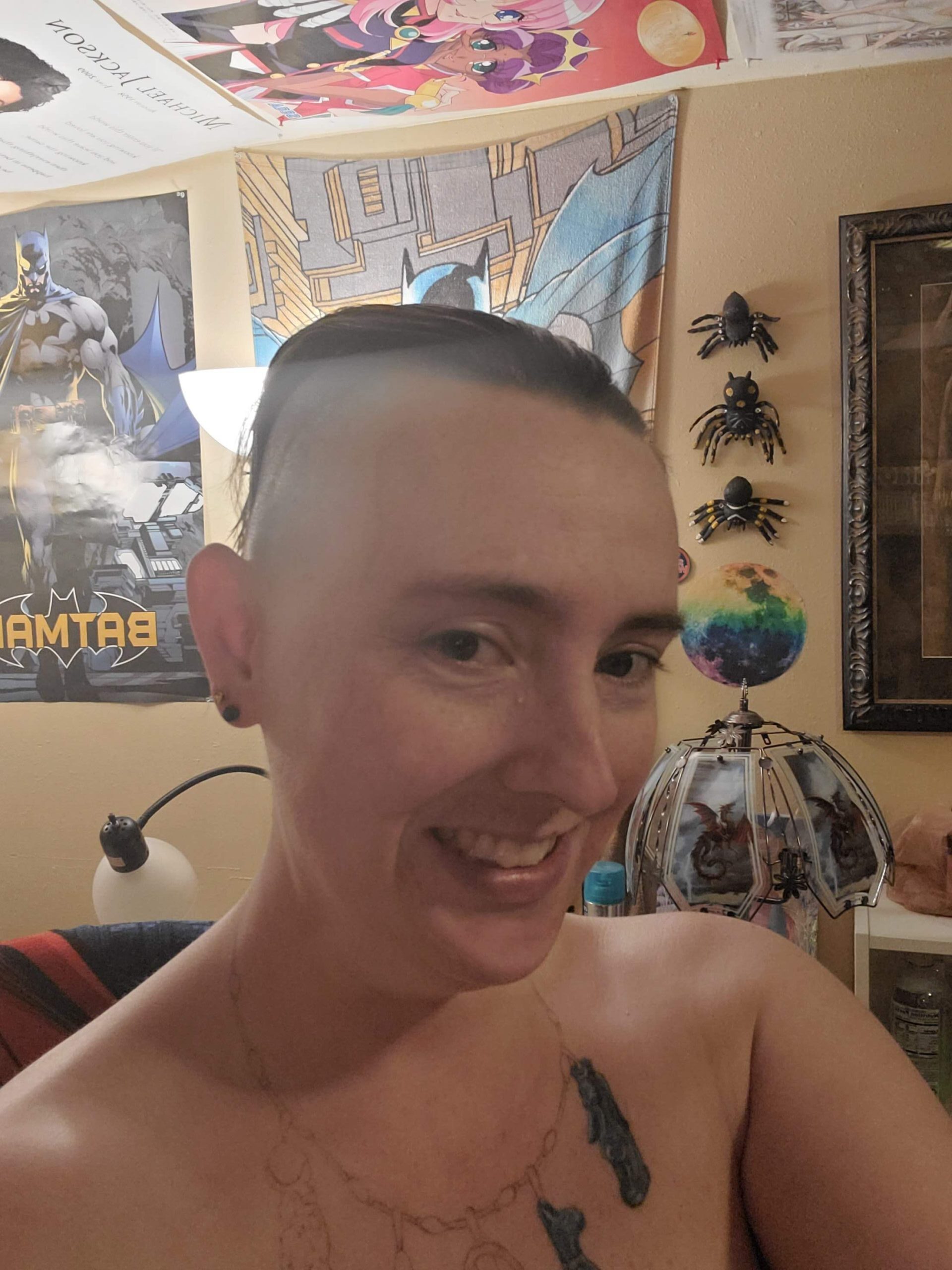 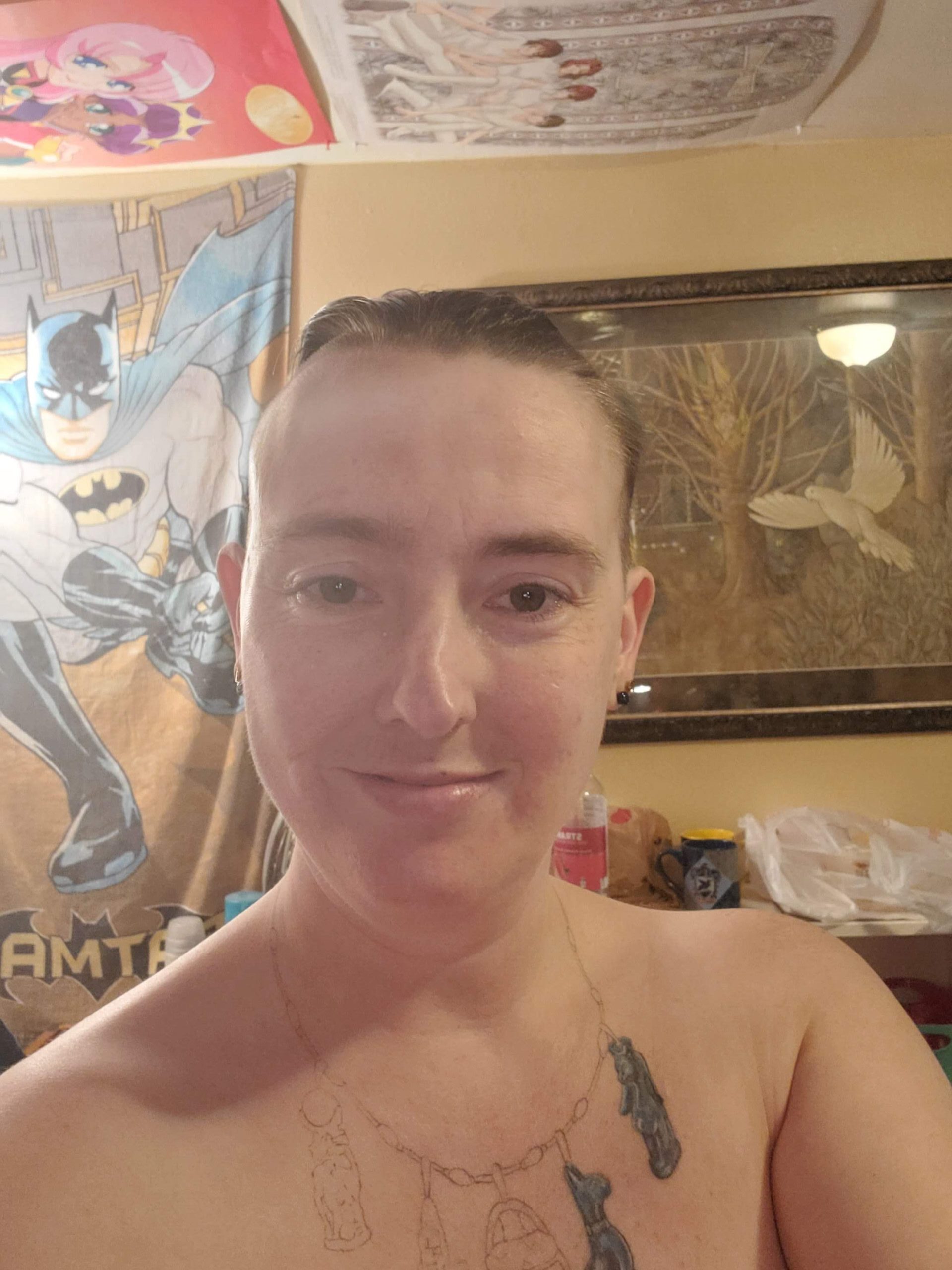 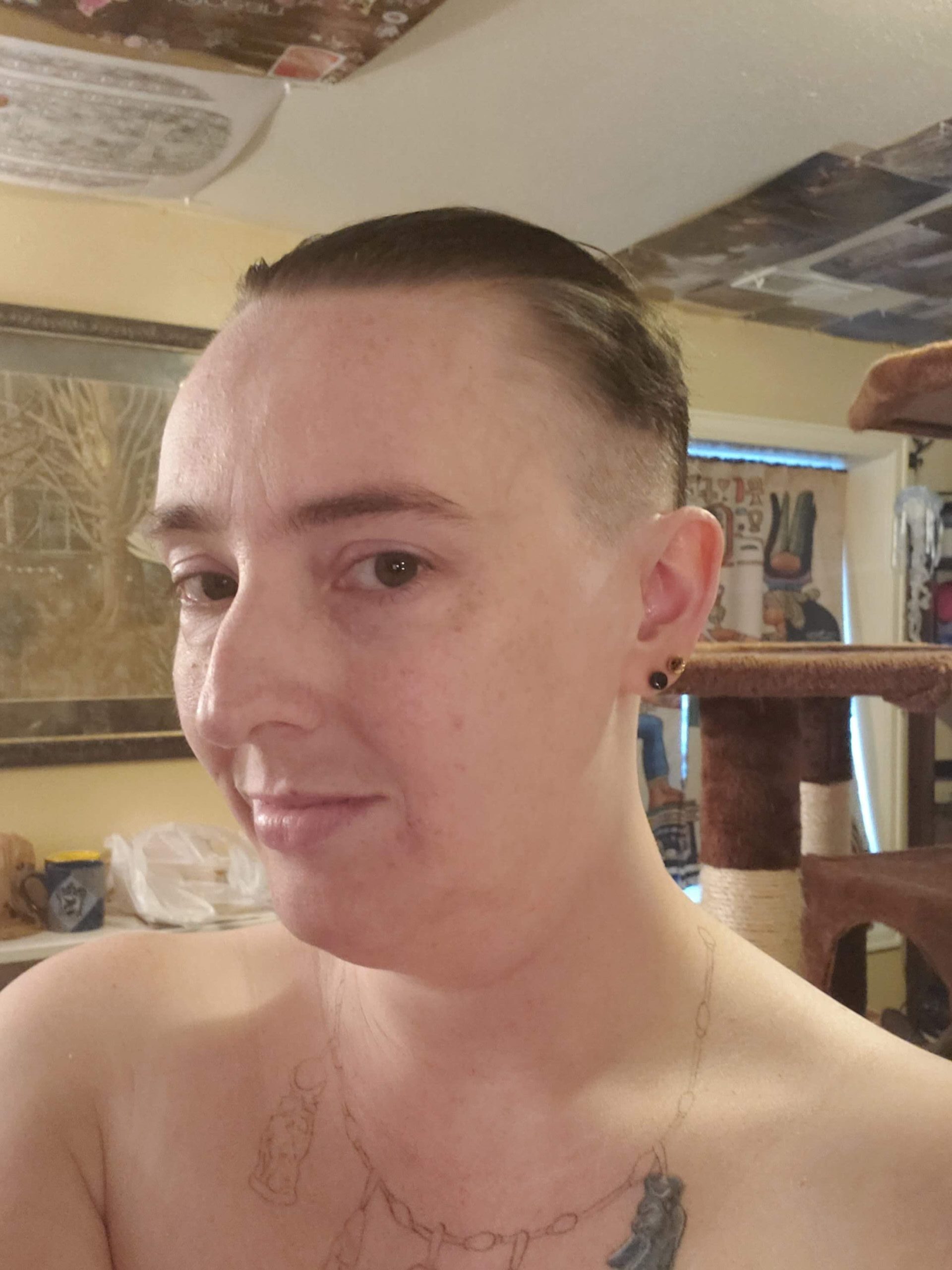 And then this badassedry is what I wore yesterday along with the new haircut: 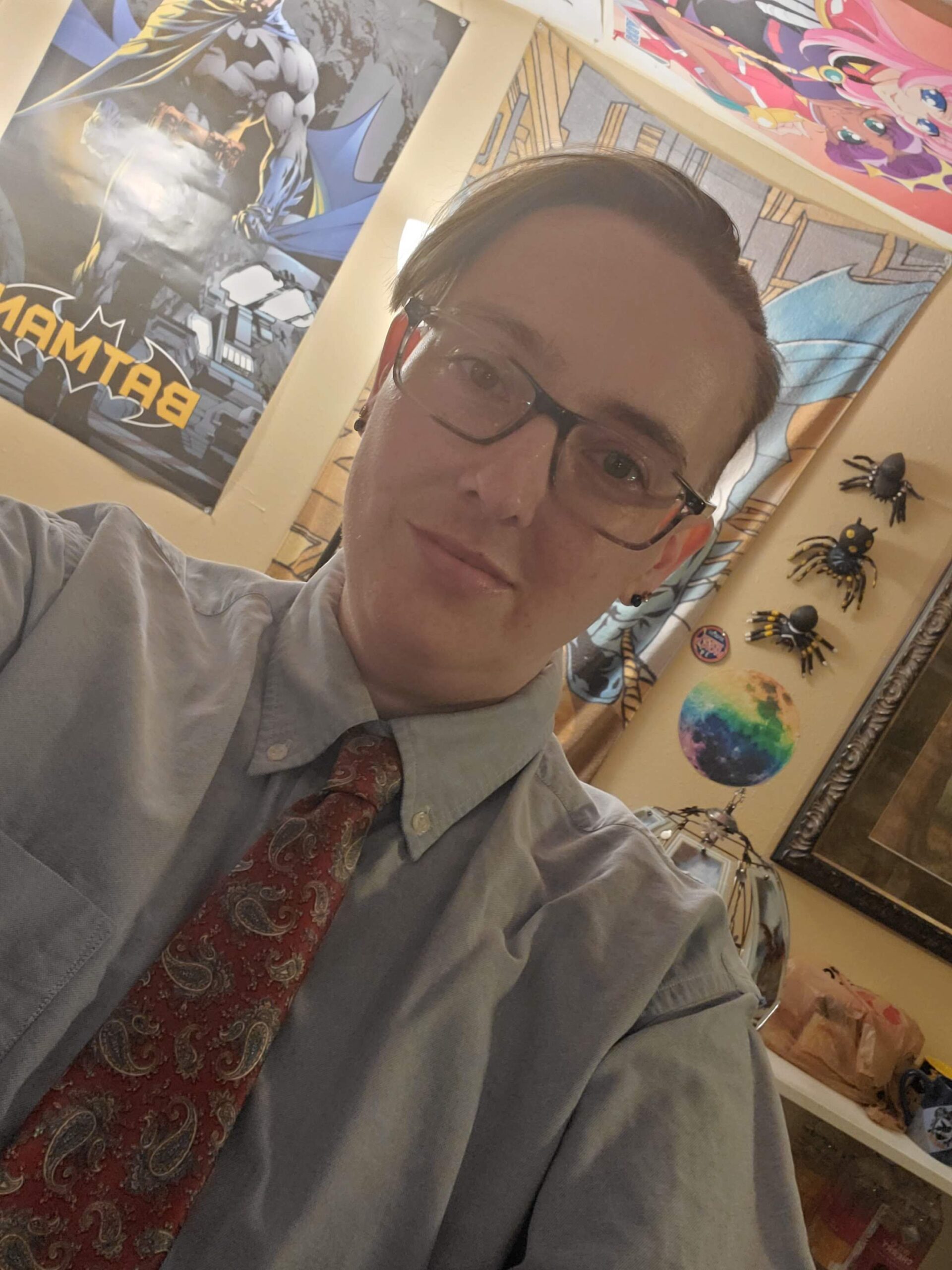 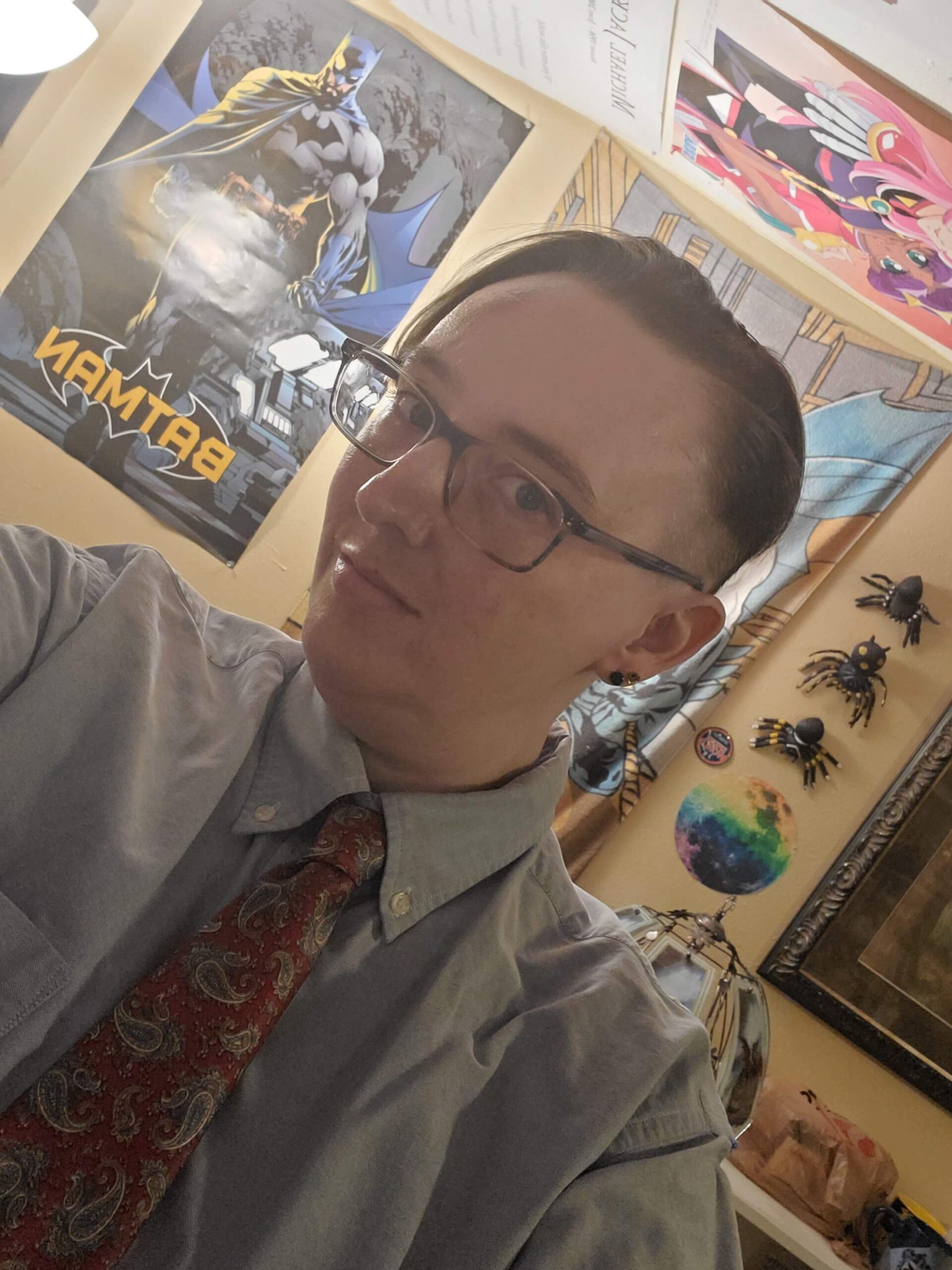 This cut is based on one that Ruby Rose wore at some point, and I am so pleased with it I can’t even. So here’s a kinda funny history that I’ve mentioned before: I’ve had the left side of my head shaved for many years now, because I think it looks cool and also to deal with that stupid cowlick. At first, the rest of my hair fell to my lower back, and was susceptible to all sorts of cool stuff like braiding and fluttering in the wind. Then, when I had to lie on my back for quite some time after having my gall bladder removed, this quite-long hair kept getting all tangled, and it was driving my crazy, so I had it cut chin-length short. Both of these looks were, I thought, very cute and fun. This year, between quarantine, businesses not being open, and not having money, I’ve gone without haircuts for long and longer periods, meaning the shaved part was horrendously growing out, and the short long part was becoming once again a long long part.

The point is that, though the shaggy formerly-shaved part sucked no matter what, the long long part was something I’ve had before and am completely accustomed to. But when I settled on the term I prefer for my gender, I suddenly pretty desperately wanted a short-short haircut again. It’s been, like, ten years since I had one, but abruptly I felt like I wanted to express my masculine side with my hair. And just overnight I started to hate having long hair with a growing frustration. The inconveniences of dealing with it seemed much greater than they ever had in the past, and I wore a lot of hats to hide it. I don’t want to say I hated my hair itself, because my hair has always been of good quality and I love it; I only hated that it was long. And the relief and bubbling happiness I felt when it was cut off was unexpectedly great. And I’ve spent yesterday and today glorying in the new cut, and also looking back and thinking, Did I just… experience some kind of dysphoria? I may be more genderqueer even than I thought XD

And speaking of gender but getting away from my hair (for now; don’t think there won’t be more), these paper towels: 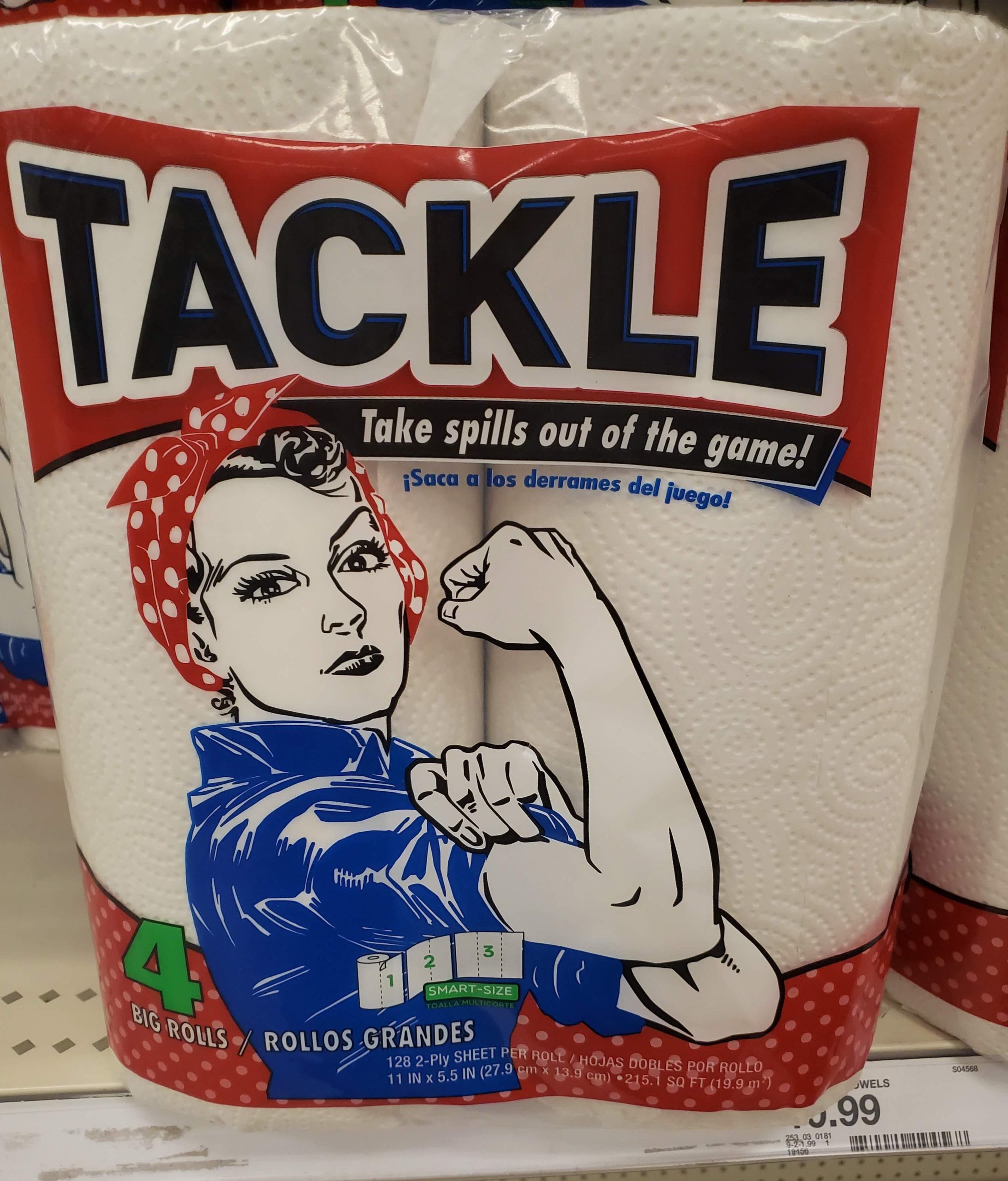 OK, so, during this pandemic when people have been hoarding in waves so that sometimes there is a decent amount of toilet paper and paper towels available and sometimes the aisles are as bare as they were two weeks in, Target has, as far as I can tell, making a Herculean effort to keep some toilet paper and paper towel in stock, even if they have to get it from unheard-of small companies that (in some cases) they probably should be buying from in the first place in order to support small businesses. So sometimes you head down that aisle, and the only paper towels available are Tackle featuring an image someone in their company (no matter how small) really should have had second thoughts about.

Regardless of the actual origin and intent of the “We can do it!” poster, for literally my entire life it’s been a symbol of feminism and women in the workforce. Copying its image on the packaging of a product used most frequently to CLEAN YOUR KITCHEN is not only maddeningly sexist, it’s also, I think, cultural appropriation. You cannot steal “We can do it!” from us and use it to oppress us through marketing — especially when it’s the only paper towel option available in the middle of a fucking crisis. At least, you can’t do that without getting called out. By me. In a photojournal entry no one will ever see XD

The brand name “Tackle” coupled with the phrase “Take spills out of the game!” makes football imagery seem natural. But far from showing a quarterback getting sacked, we aren’t even allowed a woman in a football helmet. Despite having deliberately chosen to use terms that suggest football, they don’t dare show a football player — a manly person indeed! — doing homely chores. No, instead of a vaguely clever reference that might not be a callback to the idea of women belonging in the kitchen slavishly performing domestic tasks, we get a product name and an image telling us that the strength of a strong woman is to be used for spills bad enough to require “tackling” — that a strong woman is doing additional kitchen-cleaning labor and therefore needs a paper towel that can “tackle” spills. She doesn’t get to play football, she doesn’t get to be a feminist symbol or an admirable part of the workforce, because she’s busy tackling spills in the kitchen.

And did I mention that this is being marketed to women? I want to ragequit society.

Anyway, now I’m caught up on photos. Trying to pull myself together in other areas of life as well. Wish me luck. And don’t buy any of those fucking paper towels if you can possibly avoid it.