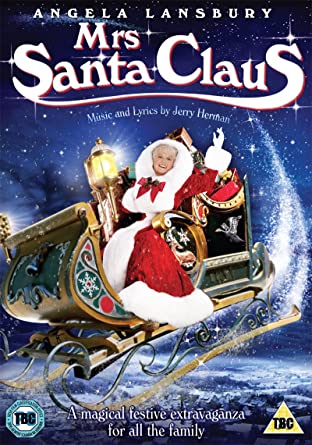 This was absent from my Christmas Movie Roundup three years ago, so I thought I’d talk about it this year. For those that don’t know, it’s a 1996 TV movie wherein Anne Claus, feeling unappreciated and ignored at the North Pole, sets out to test a new global route she has devised for her husband’s Christmas Eve delivery flight and winds up stuck in New York City, where she becomes involved in civil rights movements. The year is 1910, and the city is ready to dance and sing with Angela Lansbury as she single-handedly carries this entire movie.

I’ll watch just about anything with Angela Lansbury in, and its being a musical with giant dance numbers doesn’t hurt. Of course I was 16 when it came out, with less discerning taste and a different attitude toward art in general, but I would still watch something like this if it were released today. It’s a forgotten gem only available to stream with Amazon’s Hallmark Movies Now service, which I need to figure out how to turn off before my free trial period ends XD (Of course I realized after I clicked the button that I have it on DVD, and have probably ripped it onto one of my hard drives, but whatever.)

Angela Lansbury is a darling. Just an absolute charmer. In the parlance of the modern internet, I would die for her. And this made her the perfect choice to play a Mrs. Claus that gets tired of, year after year, standing in the background patiently waiting for her husband to get his head out of Christmas and realize she exists again. Her age and aura of wisdom and experience made her believable as a centuries-old supernatural figure; while her acting skill, and especially the expressions on her sweet face, made her believable as a forlorn and even somewhat naive shut-in of the North Pole. When she remarks in her first song that Nick has seen the world, but all she’s ever seen is snow, you really get the feeling of a small-towner that married, and now keeps house for, a busy businessman, whom she certainly loves, but perhaps envies just as much. And when this forward-thinking but incredibly innocent woman finds her way to the big city, the childlike wonder in her face and demeanor make her seem ageless and timeless. Only Angela Lansbury could have pulled it off.

Did I say she single-handedly carried the entire movie? Yeah, I guess I still stand by that. The other characters mostly have terrible fake accents and/or obnoxious voices… except Terrence Mann, who plays the villain. His performance was pretty good, and it’s always cool to have a Broadway star you’ve liked in other shows in something else you enjoy — though I have to admit, in some embarrassment, I didn’t actually realize this was Terrence Mann until this very viewing XD

The overall plot is… just OK. It would be significantly better if the aforementioned villain played a bigger role, both thematically and in physical presence, in the story and especially in the resolution. It seems odd to underuse such a big-name performer, too. Anyway, what really works in this story, and I think what draws me back to the movie year after year, is the parallelism between Mrs. Claus’s feelings of not being given her due by her husband and the suffragist / child labor issues she works with in New York. I adore the scene in which Sadie and Mrs. Claus, marching all by themselves to the rally, are gradually joined by the women we’ve seen Mrs. Claus help Sadie convince… and then by, like, a million more ladies presumably convinced by the same process offscreen. And Nora! And Marcello! I cry and cry. However, I can very easily see how anyone that isn’t specifically touched as I am by this parallelism would find the story weak.

And unfortunately, the music is not going to make up for a weak story. I actually find the songs pretty enjoyable, except that all of them are so slow. Every single one needs to be tightened up and/or taken a few beats faster, because they all drag and drag and cause the movie itself to feel draggy because of it. But there’s a lot of parallelism in the music as well, and we already know I like that.

A couple of sweet little subplots do keep the viewer interested during the weak story — Mrs. Lowenstein’s in particular always tickles me, especially when Doyle asks her to attend the Policeman’s Ball. OK, so it keeps me interested. And I love Mrs. Claus’s reaction to the revelation that Mrs. Lowenstein and Sadie don’t celebrate Christmas at all.

So this movie will probably always have a special place in my heart. If you haven’t seen it, it’s worth looking up — if you’re an Angela Lansbury fan and if you can get past the general objective mediocrity of the show XD