Again, tl;dr at the end. The surgery went well. The oncologist (who was also the surgeon) told me afterward that — well, first of all, it’s confirmed as ovarian cancer — there were some suspicious masses besides the main ginormous one, including one about the size of a quarter on my liver. She removed all that mess, as well as the reproductive organs yaaaaaaaaaaay. Apparently it didn’t take quite the five hours expected; it was only four-something.

I was in the hospital for, like, three days after that. Was it three? Maybe it was only two. Anyway, I was in the hospital for a minute, and ate hospital food with a vengeance, and had to be helped to the bathroom at first and definitely for my first shower. My oxygenation plummeted every time I fell asleep, which was frequently, so that was fun. They’re remodeling their kitchen, so every meal I ordered took 100 years to arrive. Seriously, one meal was three pre-packaged items, and it took an hour and 45 minutes XD

My main scar is 9 inches long, and there’s a lap scar and a third one where she put in the chemotherapy port. I have two abdominal binders that I’ve been wearing ever since the surgery to keep my innards in place, and they are hella uncomfortable. I only get to take them off for showers. You can see here the lines they leave in my skin when I briefly remove them for, say, taking a fairly horrible picture of my abdomen: 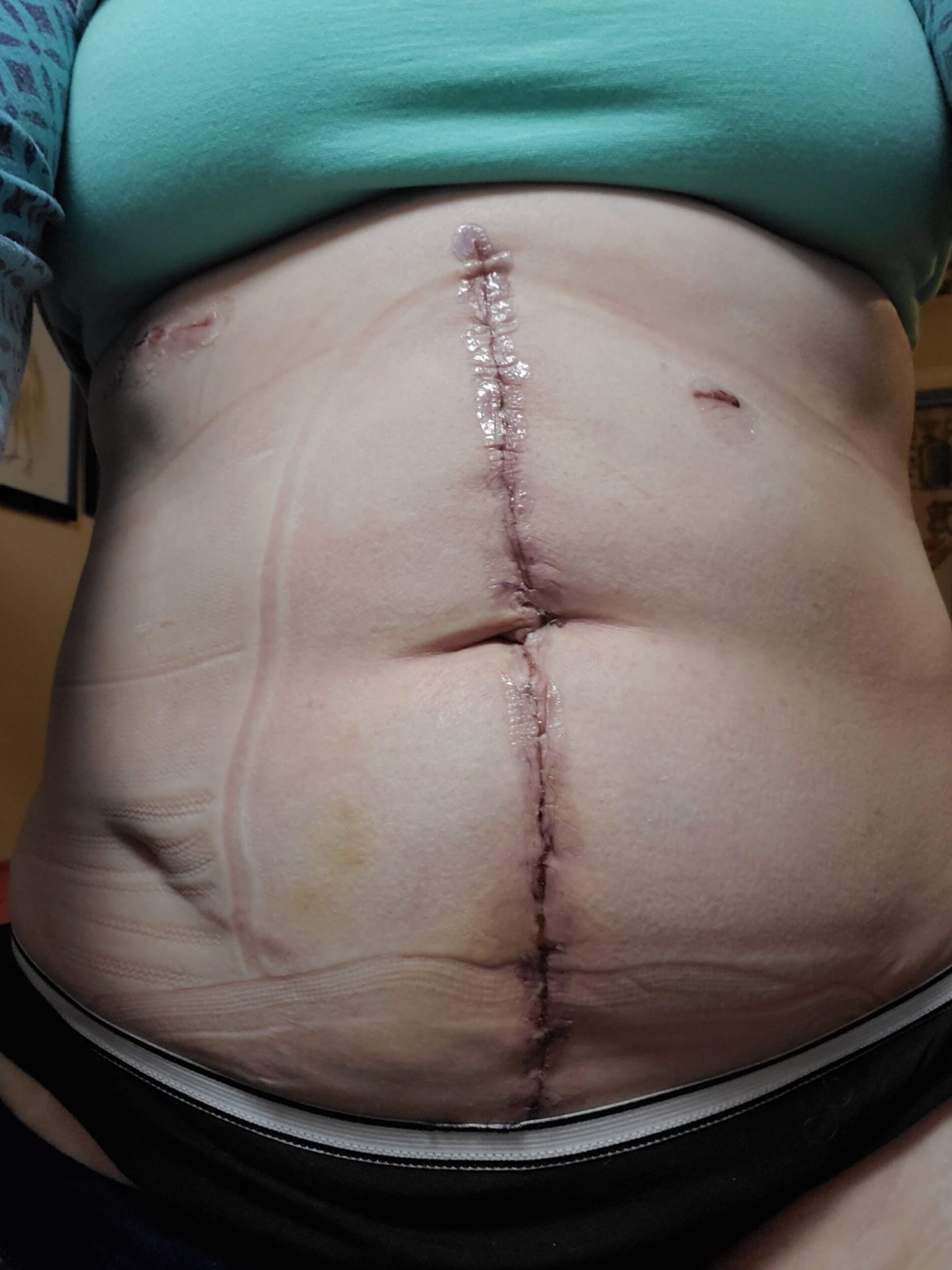 There’s no reason to show off my pubic hair, so there’s an inch or so of scar you can’t see there. It’s impressive, right? And I used to think my appendectomy scar was fairly large! Also, check out my fucked-up belly button XD XD

I’ve lost about 15 pounds since the surgery. The mass and those organs and all that omentum must have been heavy stuff! Right at first, of course, I retained a ton of fluids since they were pumping me full for three or four days, and my boobs had inflated by, like, two cup sizes XD By now that’s back to normal, though, and at the doctor’s appointment I had today (GP, medication follow-up, unrelated to all this stuff), I weighed in at 165. I don’t remember when I last saw 165 XD

I feel like I’ve been recovering very well and smoothly. It still hurts a decent amount, but it’s down from that post-surgery feeling as if someone… well, as if someone cut me open from stem to stern and pulled stuff out. And some of the symptoms I was having before that were really screwing up my life are simply gone. No more constipation. I’ve been able to eat whatever I want and it hasn’t had any negative effect. Urinary incontinence (and the sleep disruption that came with it) has completely stopped.

Next Tuesday I meet my chemotherapy doctor. I get the feeling the appointment will be exactly that — meeting the doctor and getting treatment scheduled, rather than getting any actual chemo that day. I’ma preemptively shave my head so I don’t have to deal with head-hair falling out all over the place. The rest of my body hair can do what it wants. Next Wednesday I have the follow-up with the oncologist, where I assume she’ll give me all the details I haven’t heard yet and HOPEFULLY TELL ME I CAN STOP WEARING THESE BINDERS.

Turns out, when it’s discovered you have cancer and are on Medicaid, everything happens at a whirlwind pace from there. Referrals and appointments and new doctors seem to be tripping over themselves to help me, and it kinda makes my head spin. I have just a tiny bit of survivor’s guilt (obviously not precisely that) thinking about all the people with awful medical conditions that don’t get this type of care.

So today’s tl;dr is that I definitely have cancer but I’m doing well, and have about a million doctor appointments scheduled in coming days. Today I’ve been trying to edit that FiFiF chapter, but it hasn’t worked yet. I was right about binge-watching Netflix.