Sometimes I get on Etsy and go through, like 100 pages of search results for various things. “Spider” is one of thems. I got this ridiculously cute sticker and put it on my laptop: 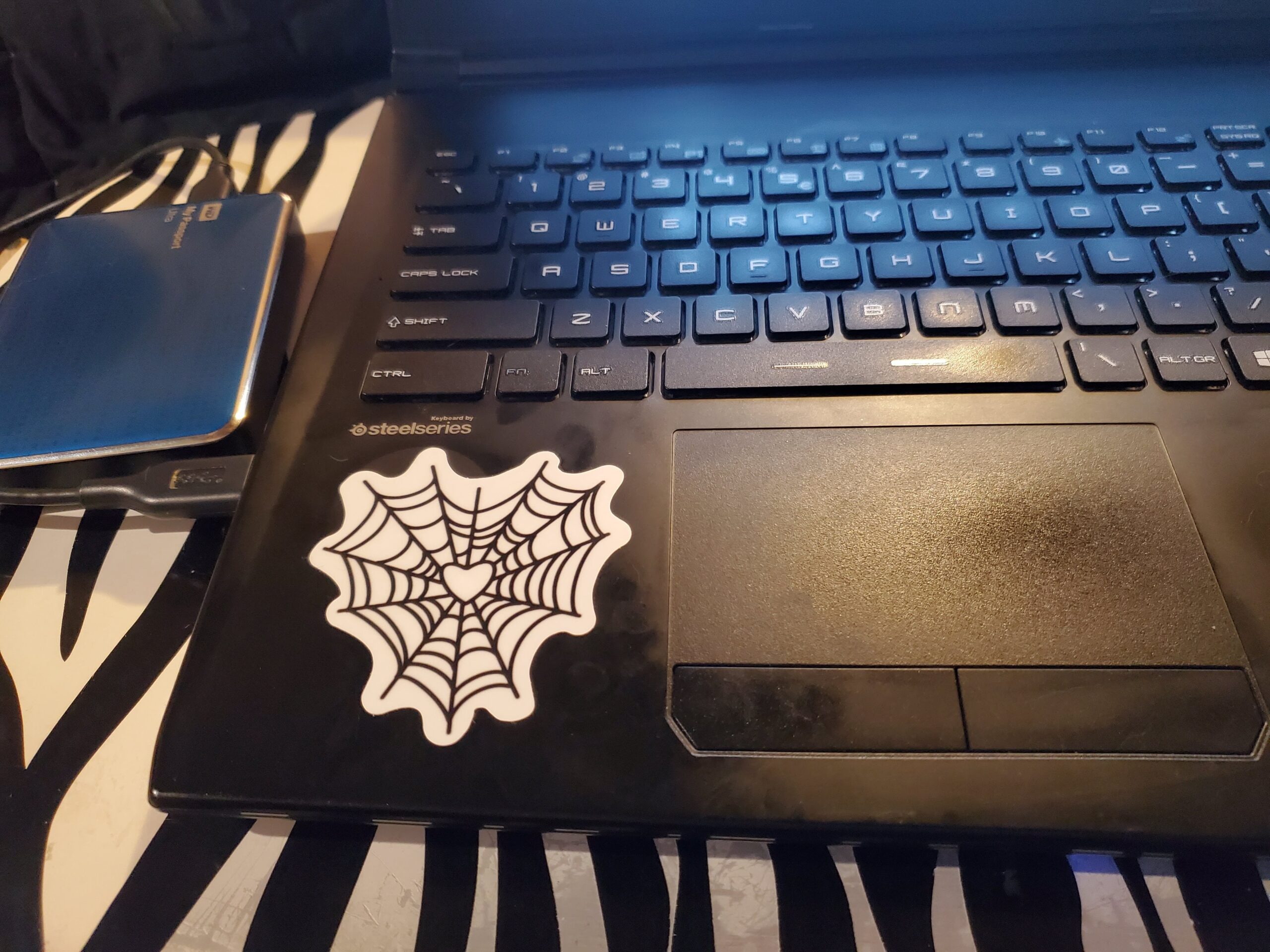 I thought Hiko looked cute and kinda cool all framed in this doorway: 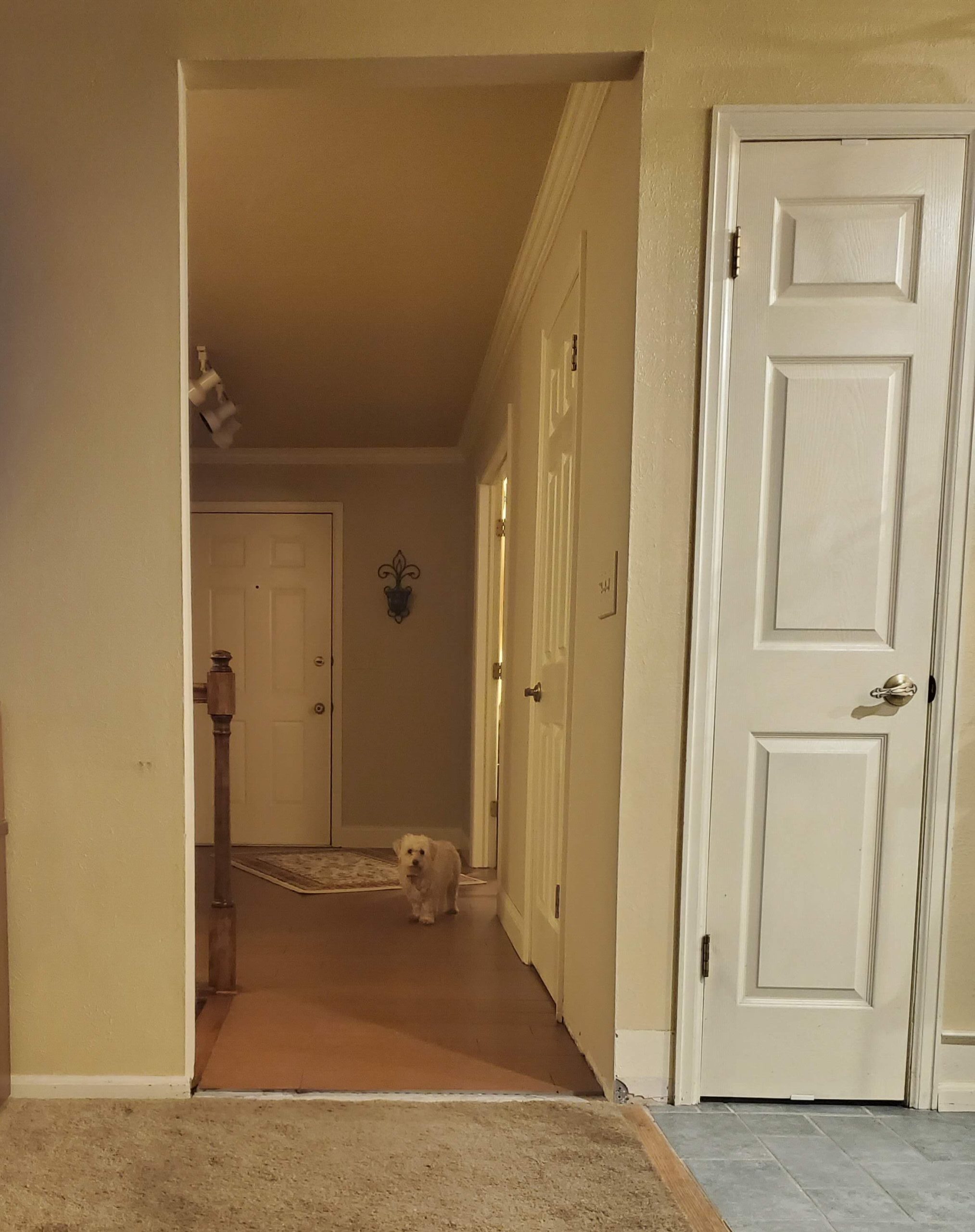 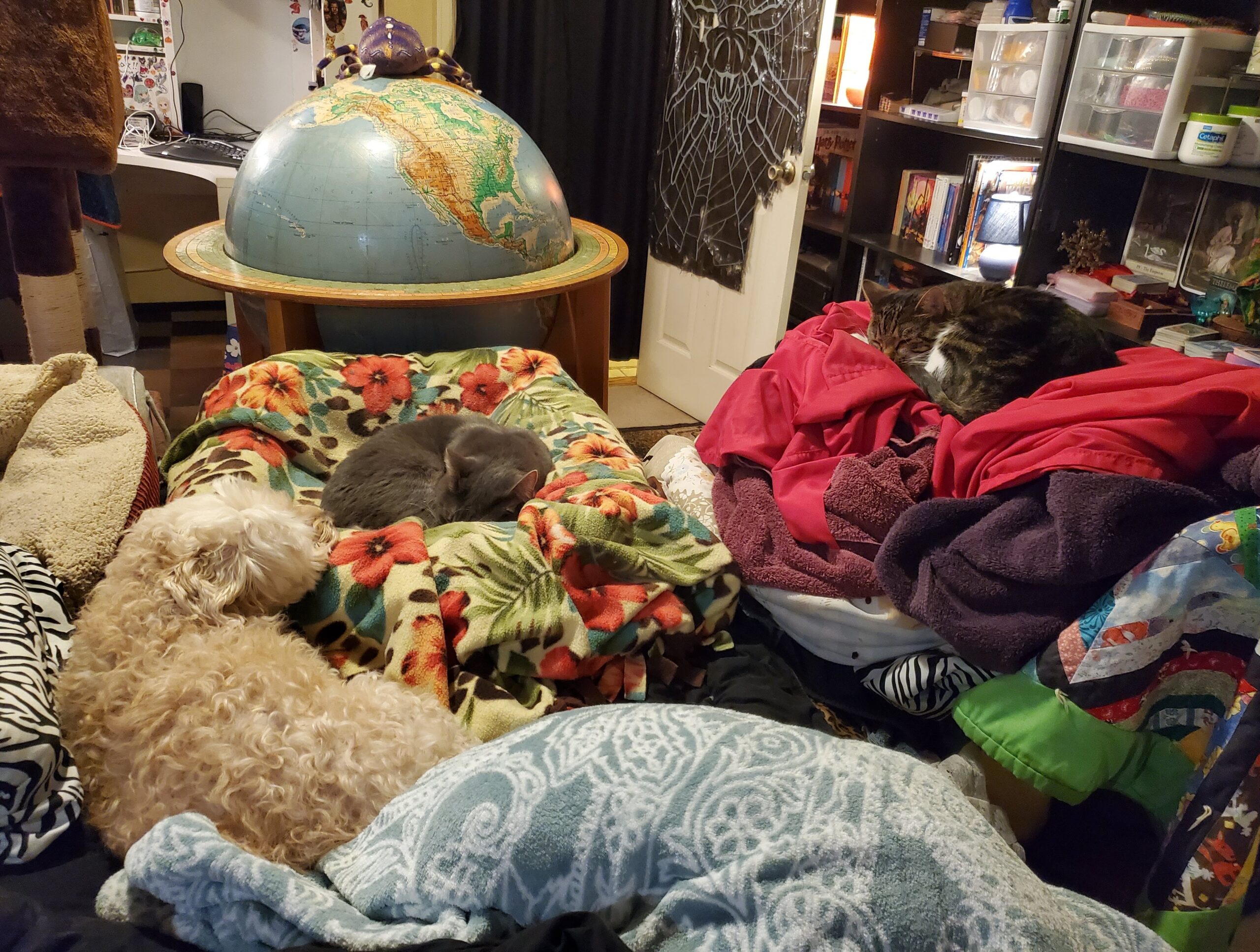 My grandma sent me a pretty cool makeup set that has all secret drawers that fold in and out and stuff like that. She knows I don’t wear makeup, but that I draw with it sometimes. But I figured I’d put some on before I added it to my visual art supplies, and send her pictures. 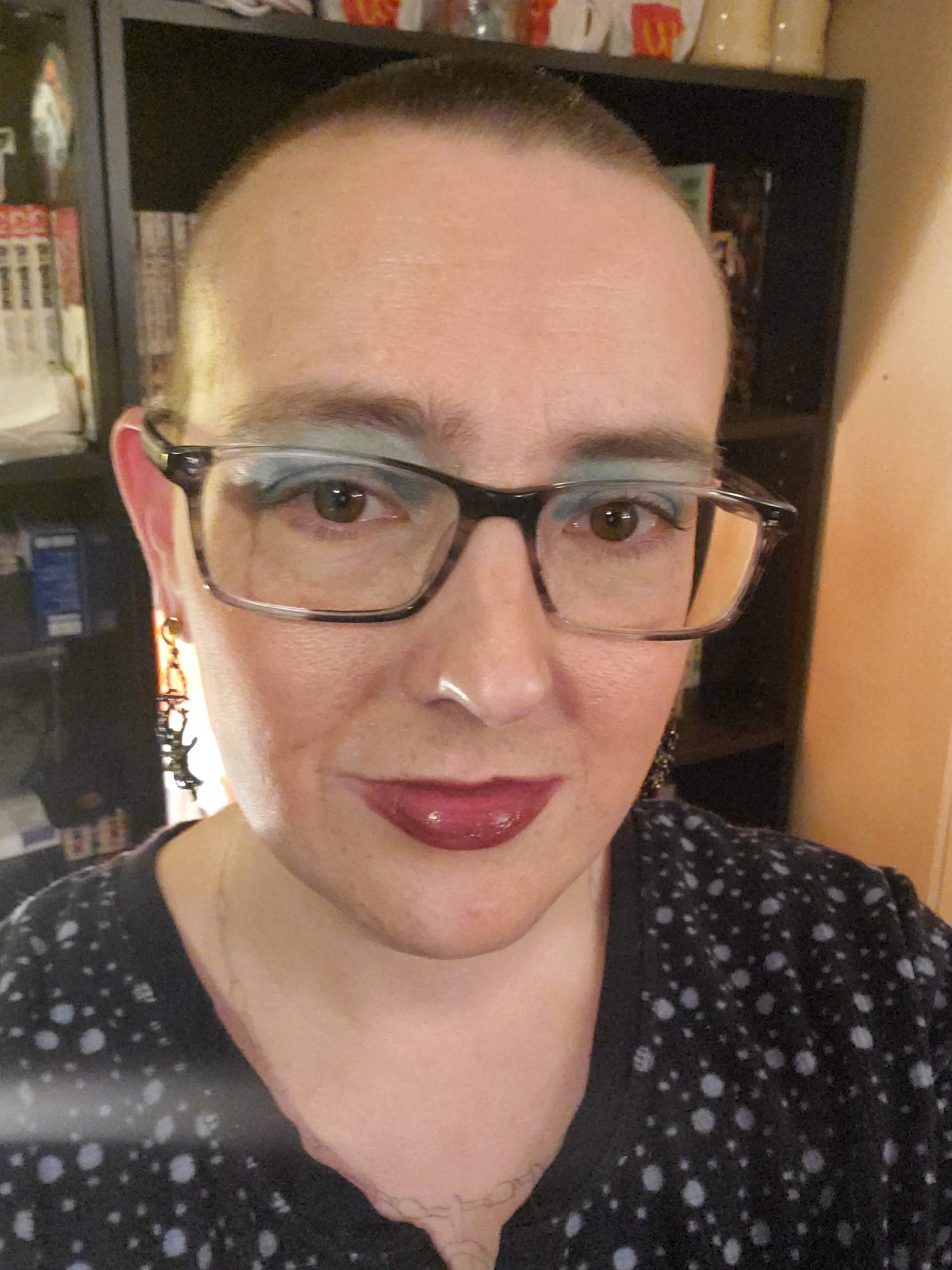 And duck-lipping hard for good measure: 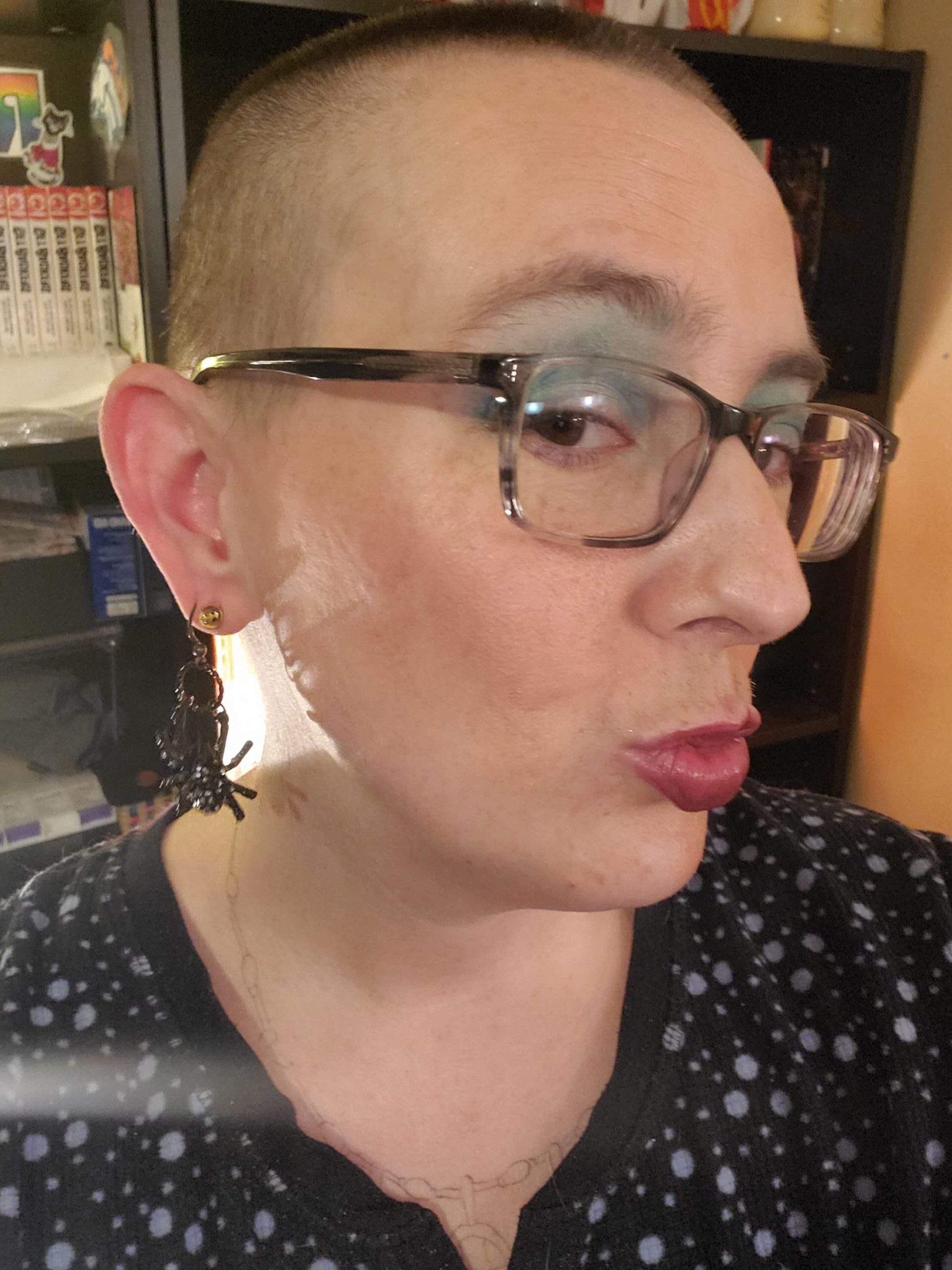 I learned how to put on makeup in the early 90’s, so 80’s style makeup is essentially all I know how to do XD And it’s just way too much trouble, what with glasses and needing to wash it off and taking the time to put it on in the first place. But I’m still experimenting with it as a visual art medium!

I went to the hospital again (different location this time, though) to get an IV port put in for chemo, and I noticed that they have a very special room there. 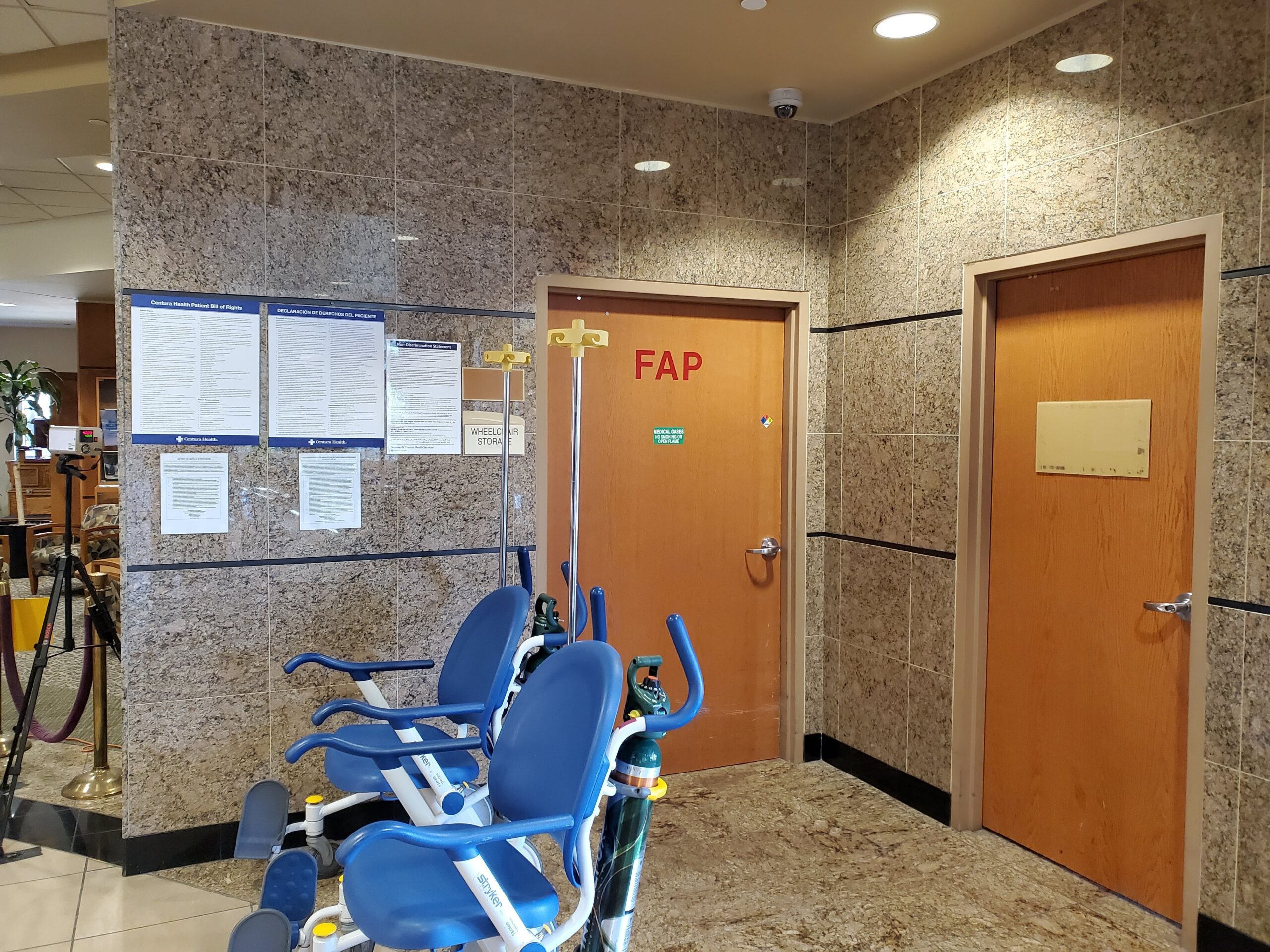 I mean, they provide for everything at hospitals!

Here are the incisions for the port: 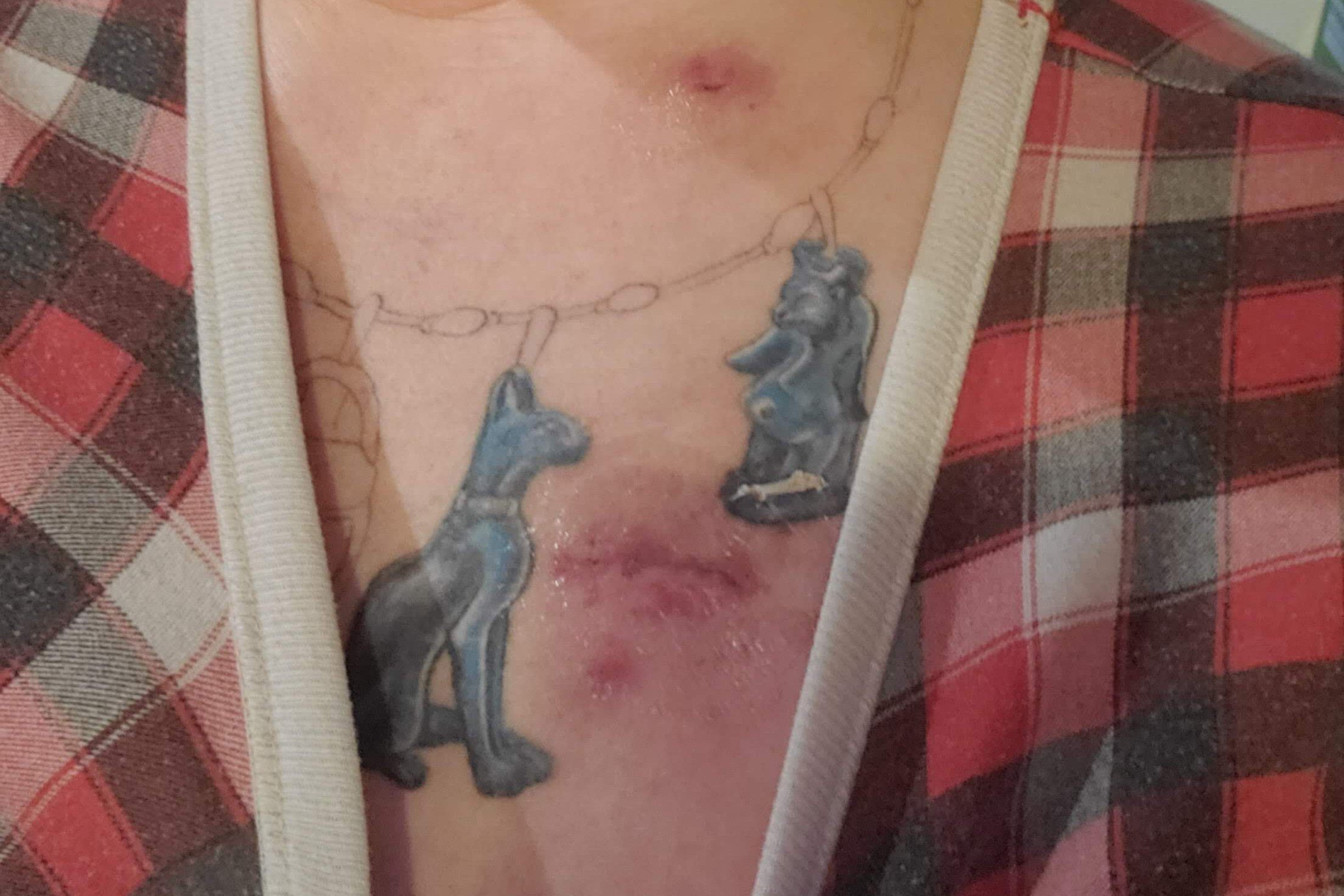 The doctor specifically promised not to mess up my tattoo. It was too swollen right after to see the actual port, but when that went down, you can make out its three lil nubs through my skin.

I think I wanted to show my Discord friends my Star Wars backpack purse. I’m pretty sure I took pictures of it back when I first got it, but here are some again: 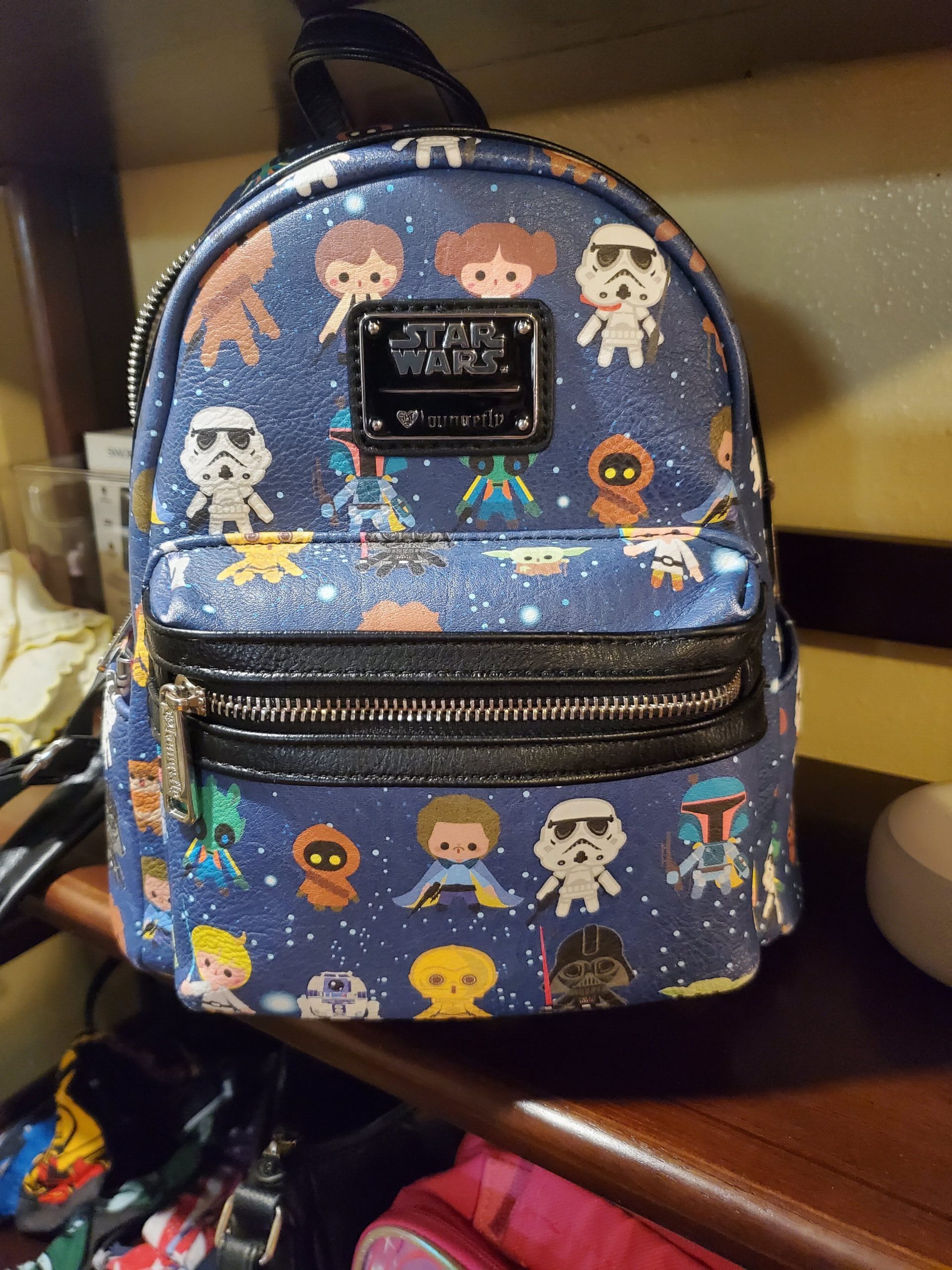 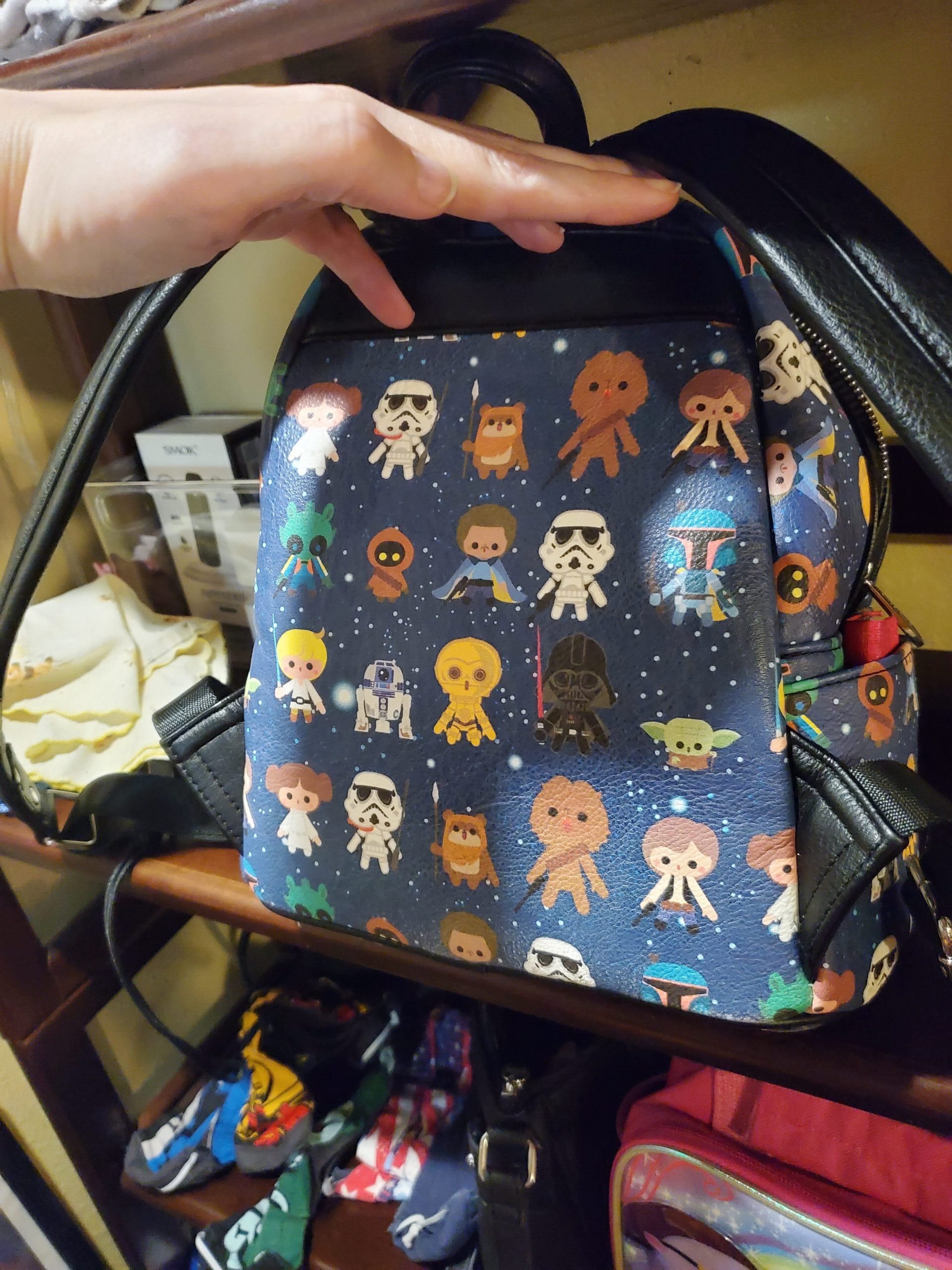 To celebrate(?) my very first chemo treatment, I painted my nails the night before: 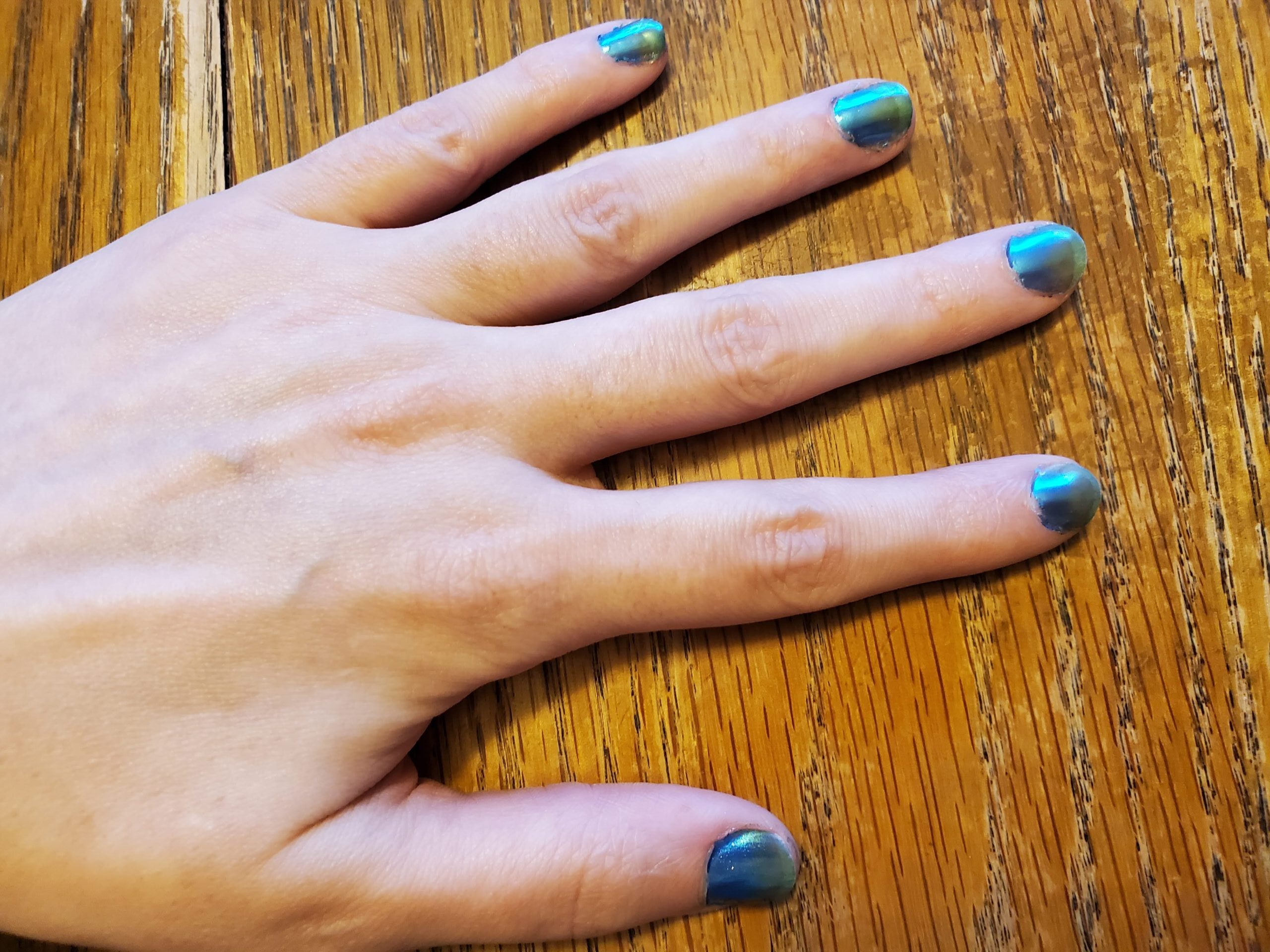 Lookit all those sloppy edges. 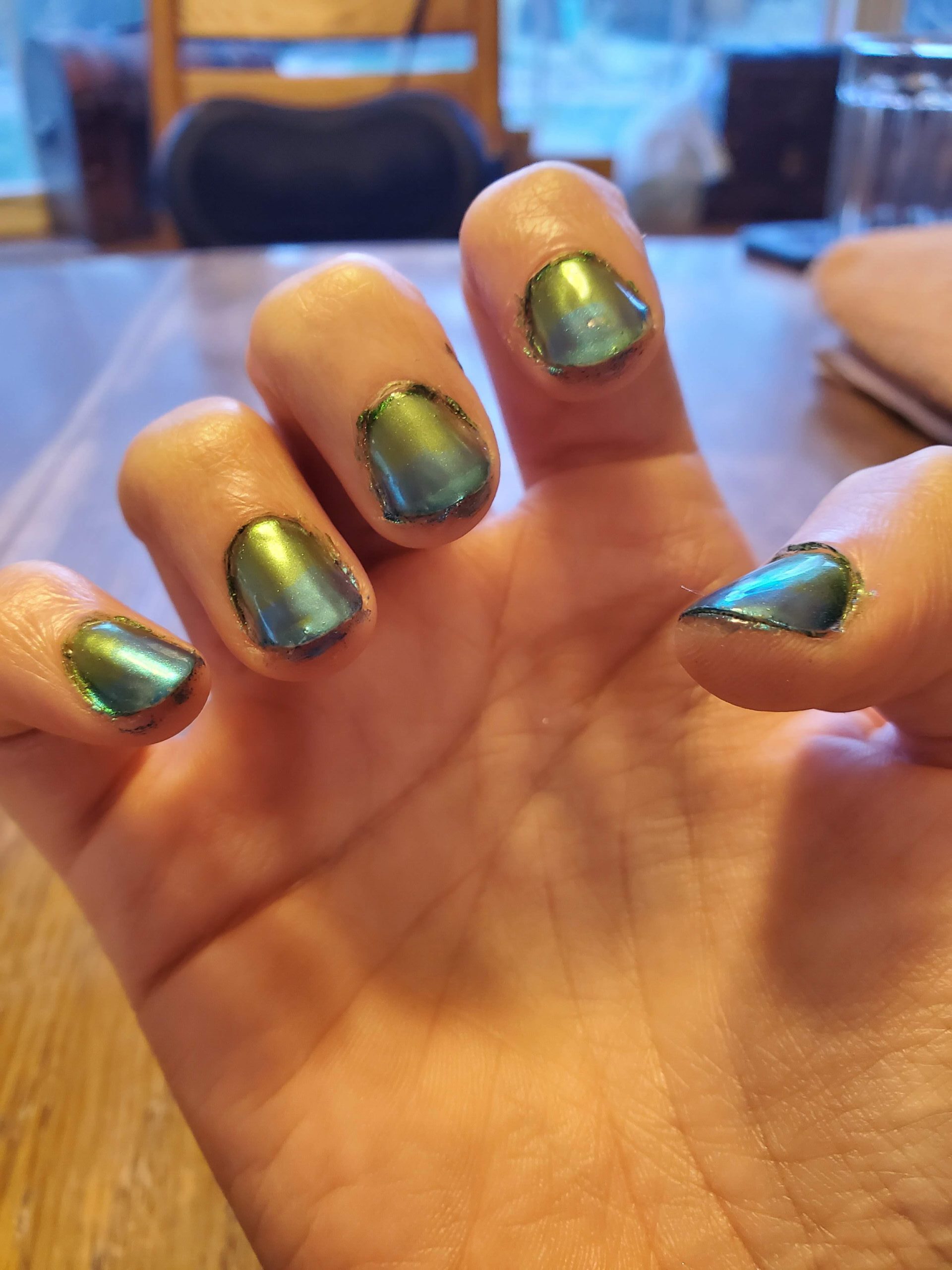 That same day, I was struggling to get my clean laundry folded before chemo actually started, because I didn’t know how much laundry-folding I’d be up to during the process. And Suki reminded me that I needed to get on that by getting on that: 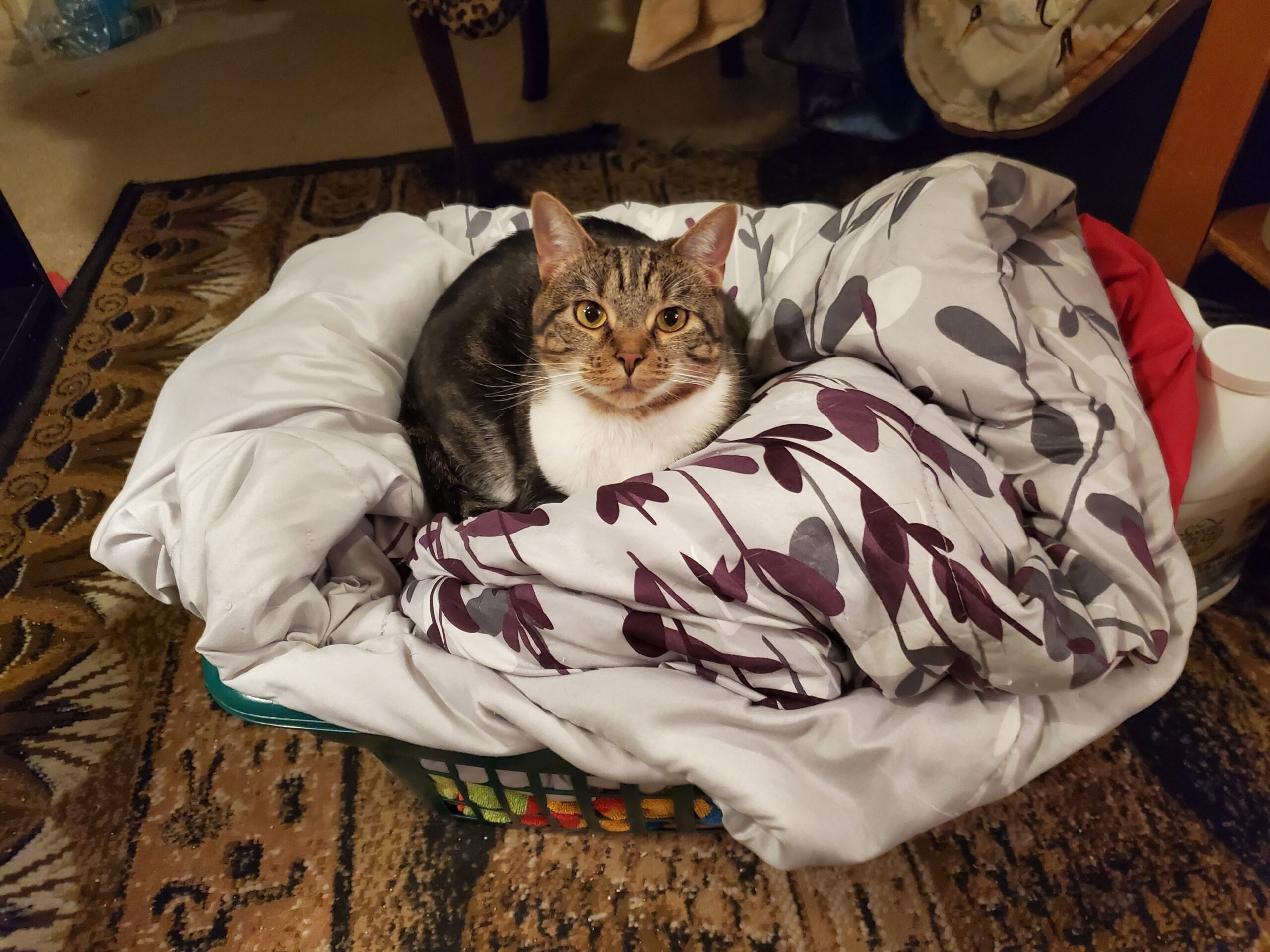 THE DAY OF. After chemo (which wasn’t that bad the first day), some friends of the family brought me presents. First there were these Reese’s peanut butter cup “flowers” with dorky positive things written on the backs: 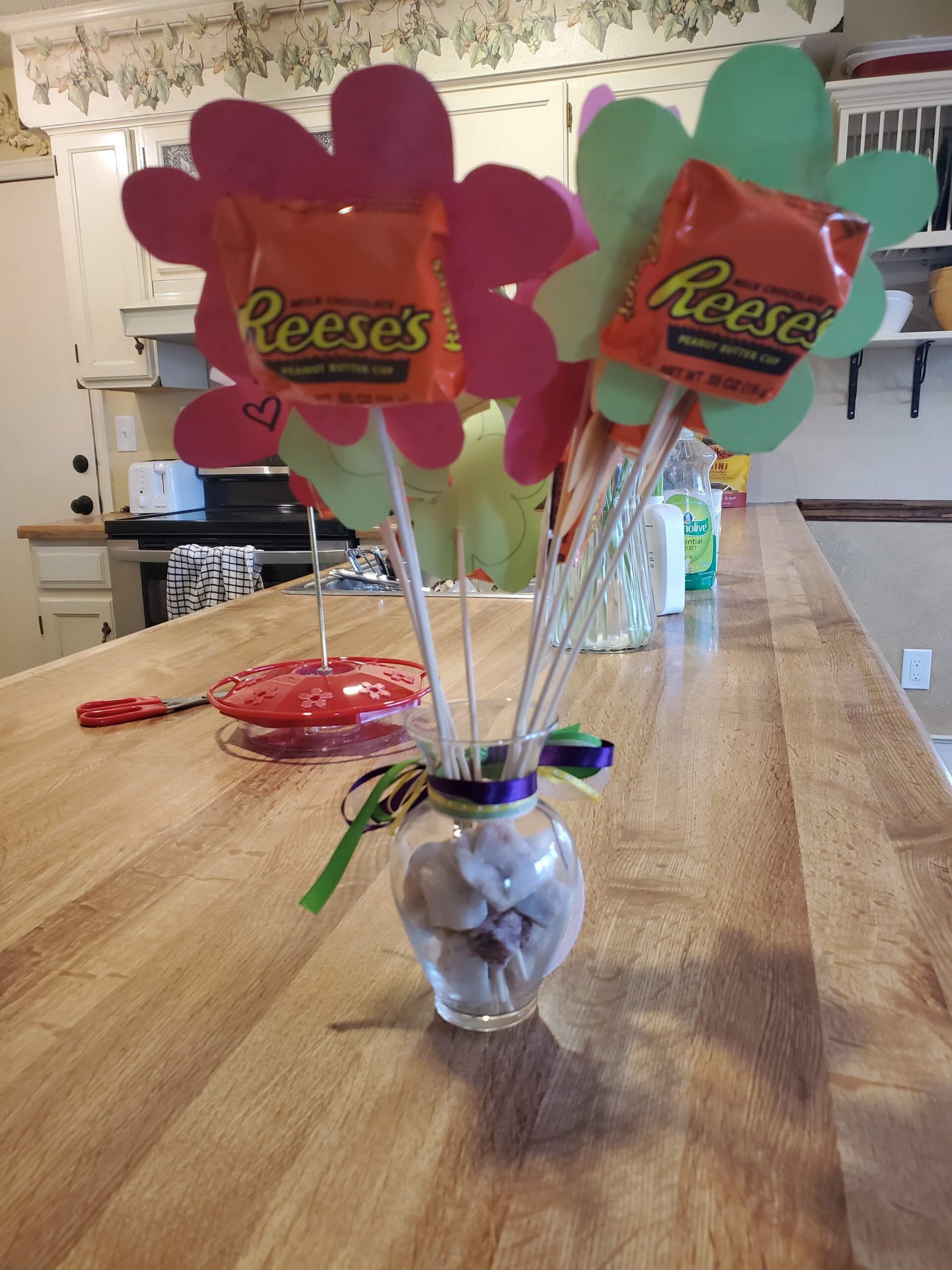 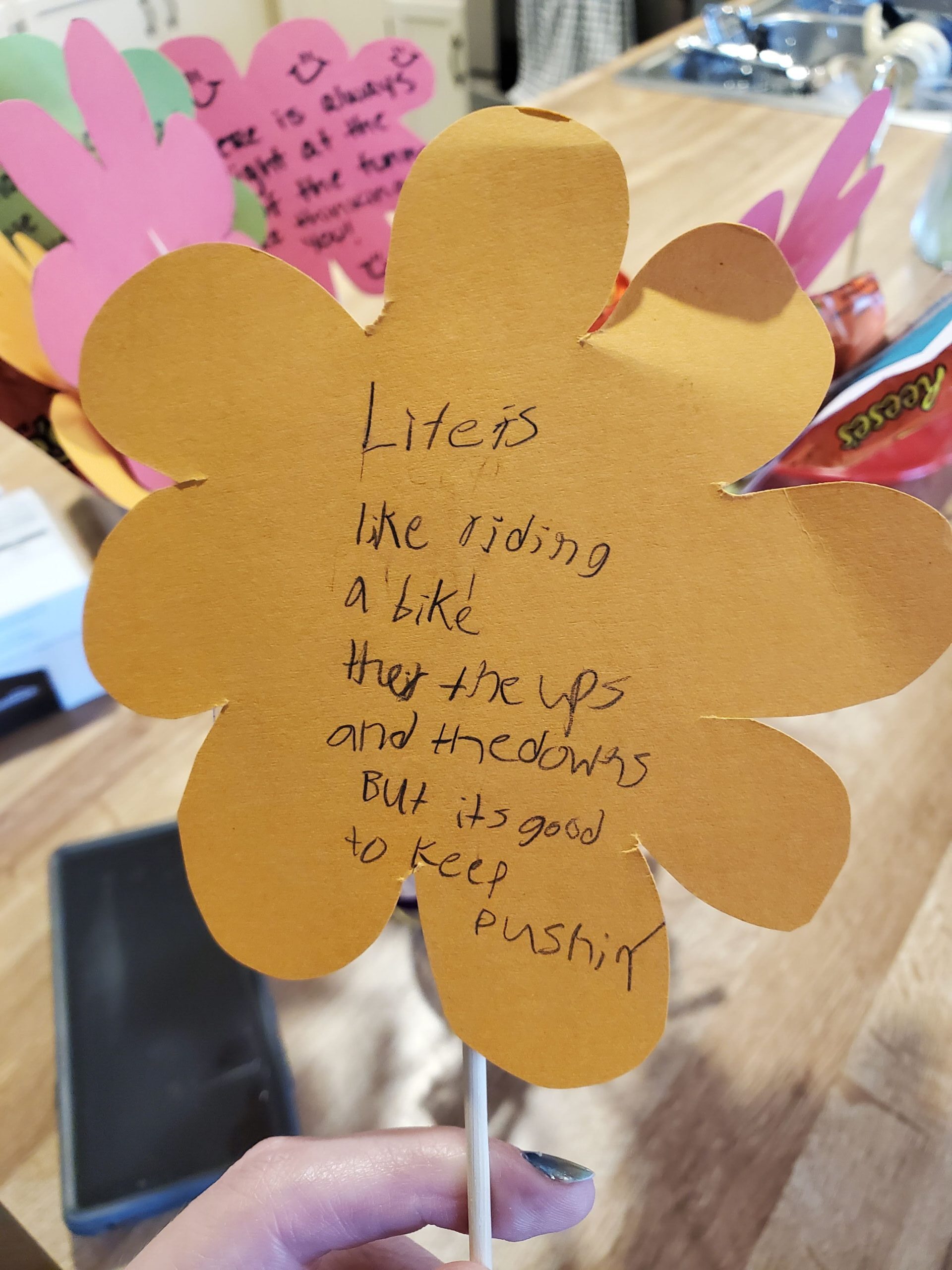 It was so sweet, because you could tell all the kids in the family (and, I think, some kids of a neighboring family) helped make these. But they also brought me real dead flowers too: 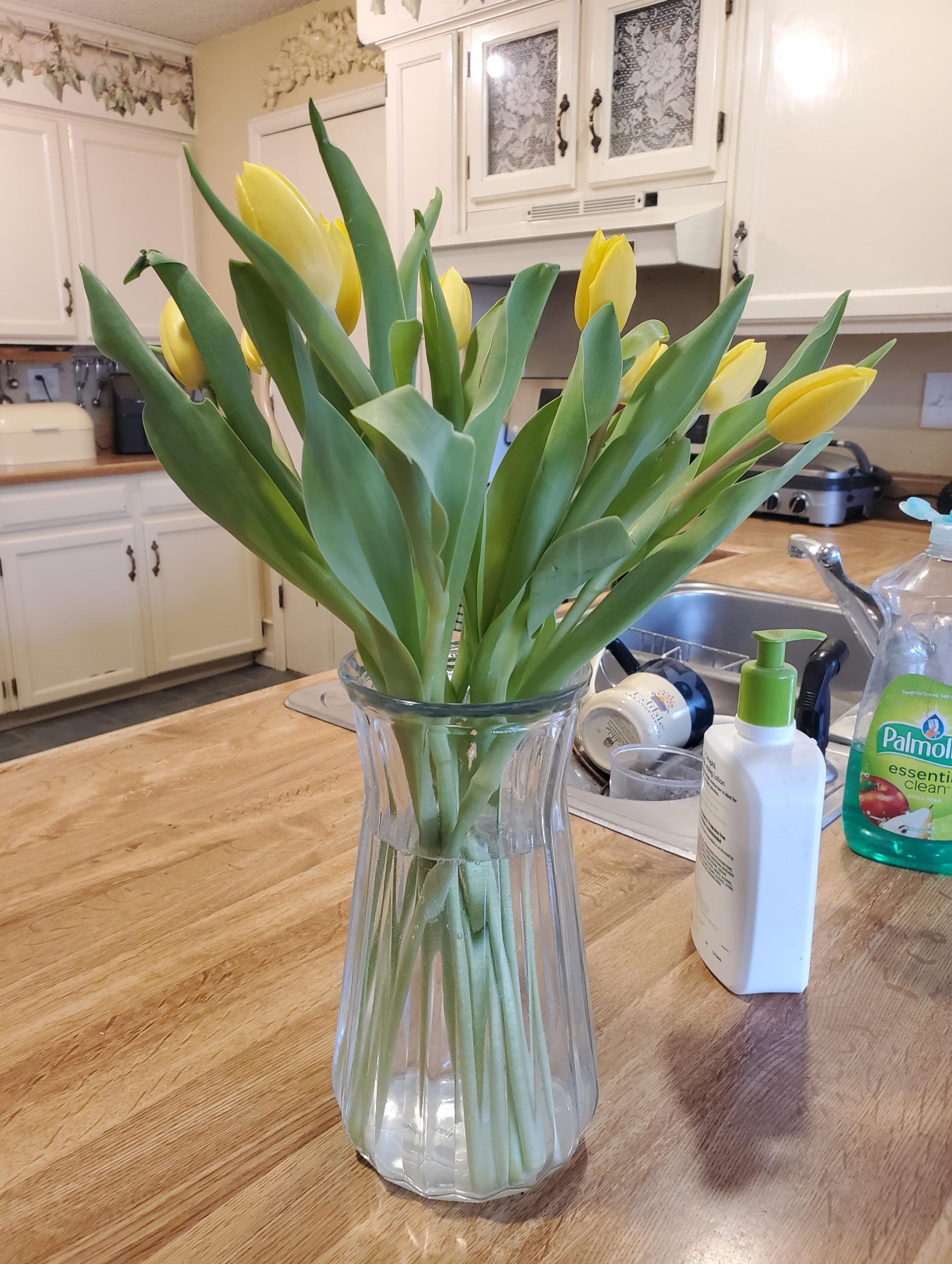 So cute the tulips!

Also that day after chemo, something I’d ordered on Etsy arrived. I found this amazing shop while searching for spider stuff, and just fell in love with the tarantula design. I once wrote a poem wherein a tarantula was a metaphor for first love, and I thought it would be really cool to have that poem printed on the covers of a book with a picture of a tarantula on it. 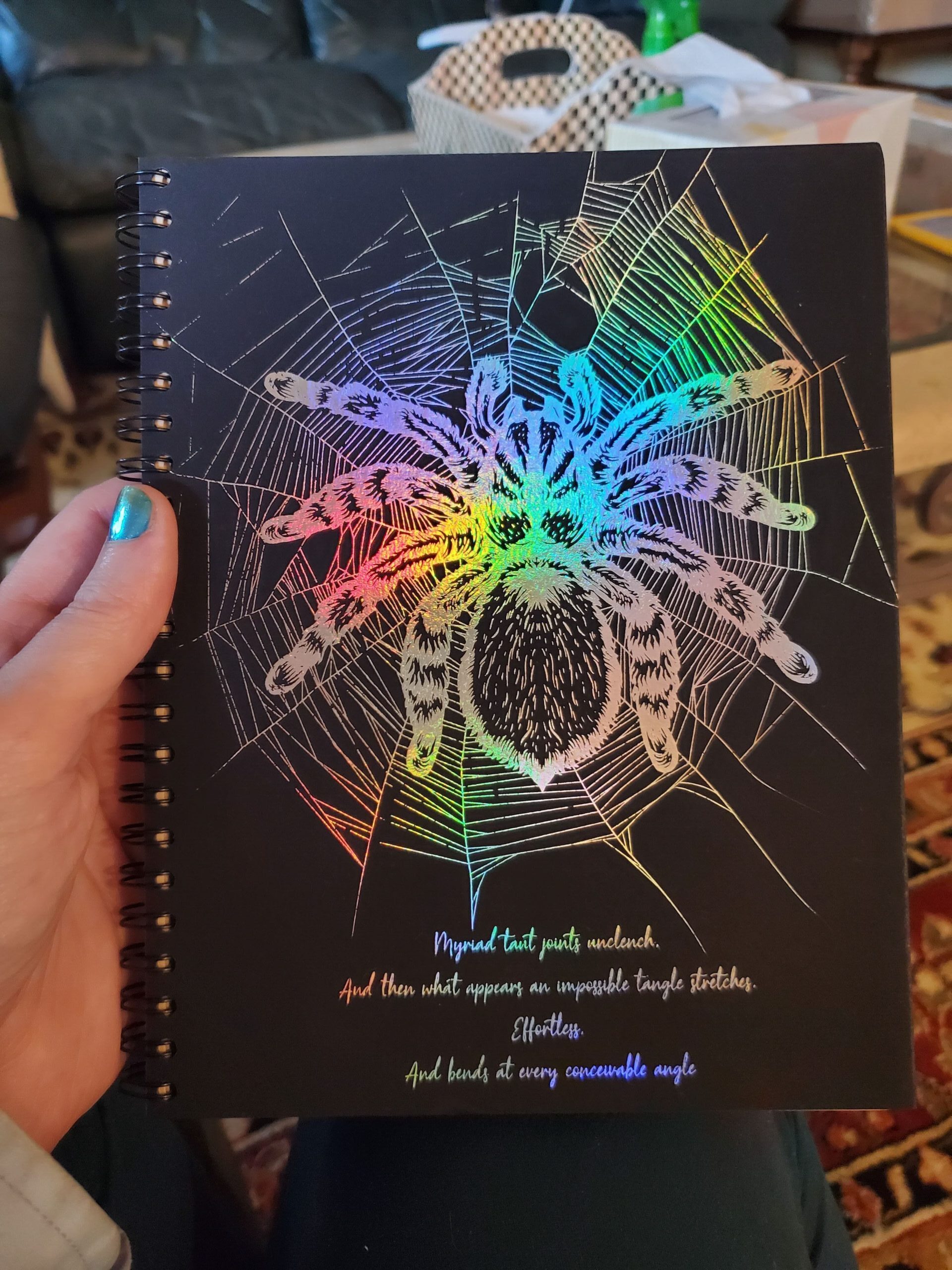 So I messaged the shop owner, sent them the poem, and asked if they thought the entire thing would fit across the front cover, inside front cover, and inside back cover. They were so kind as to put together a mockup of the whole thing to see how it would look. It was so amazing that I approved it at once and placed my order. 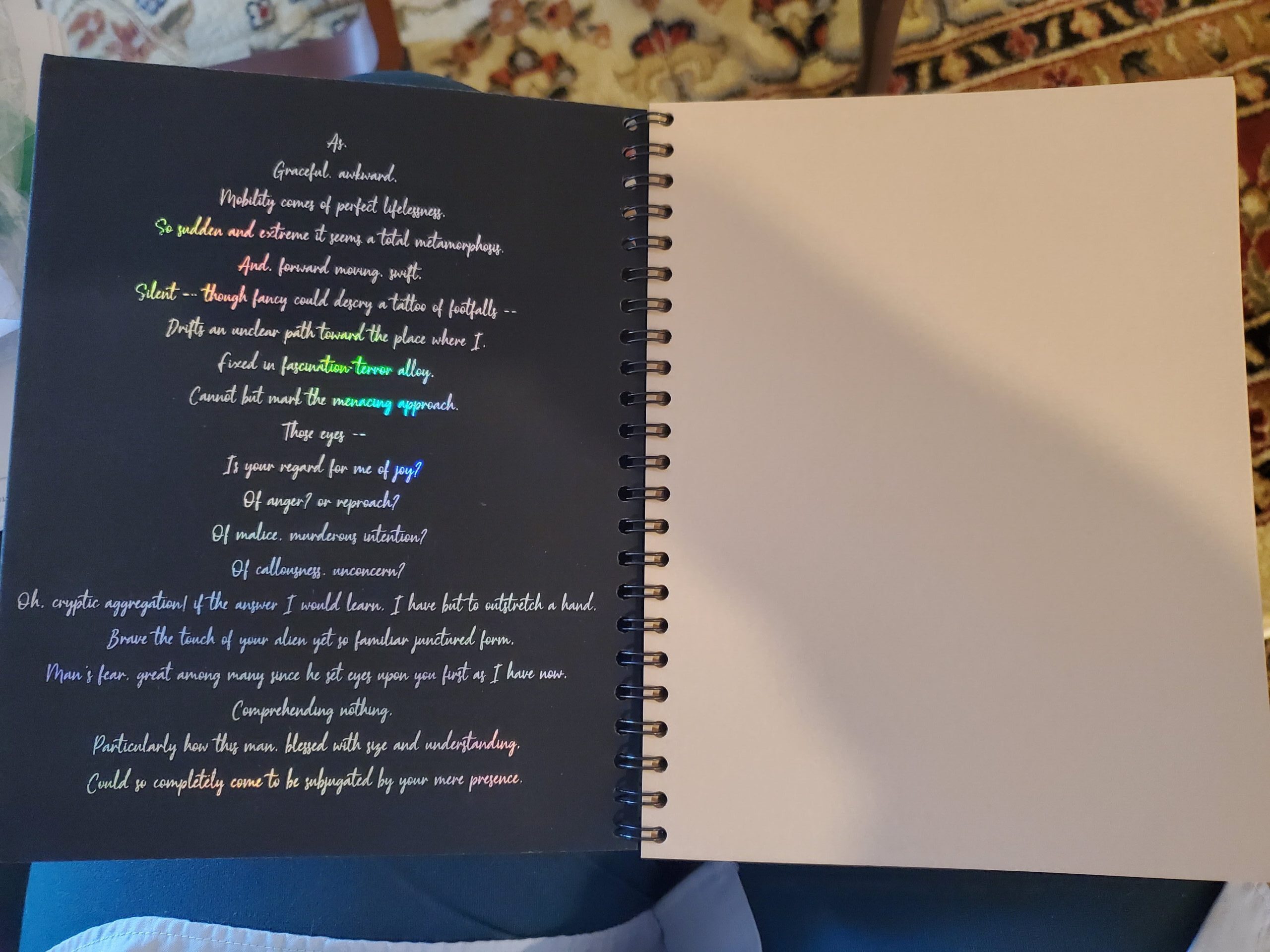 Somewhere in there, though, was a lot of debate and uncertainty about which colors I wanted. They have almost unlimited options for the cover and the page colors, and a handful of different options for the foil, and even for the spiral binding. I wanted to order more and more and more books in every possible combination. 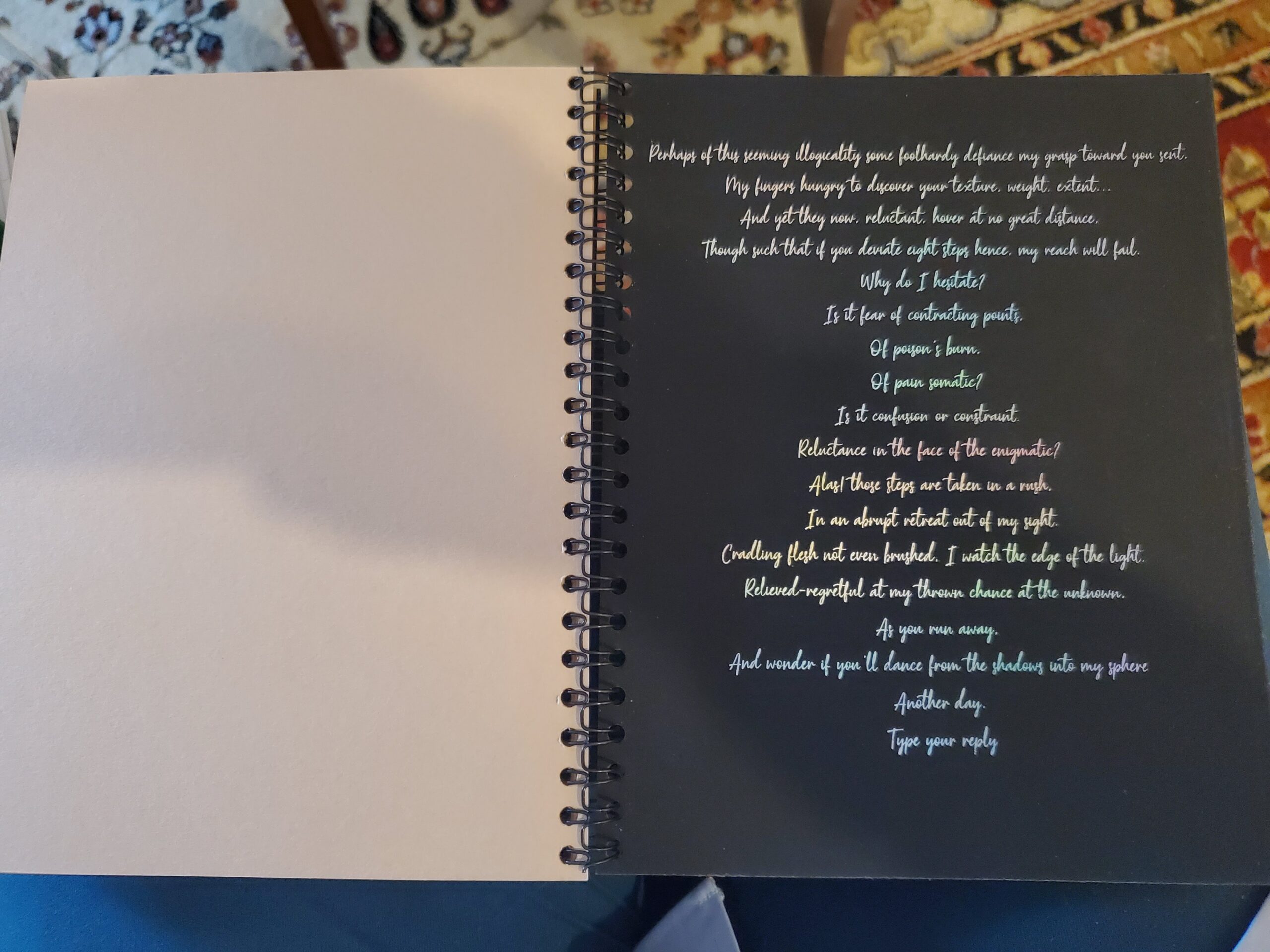 I bought it planning to use it for a sketchbook, but of course I had no idea of the quality of the paper. It turned out to be absolutely perfect for Prismacolor, and colored paper has revolutionized my drawing process. I wasted so many colored pencils on white paper in the past!!!!

So there’s a little bit of an Easter egg on the inside back cover. It turns out that when you send someone a message on Etsy, the text that’s preloaded in the text box doesn’t necessarily get overridden. It’s a good idea to check on this if you’ve included something in that box that you want printed on something or whatever XD 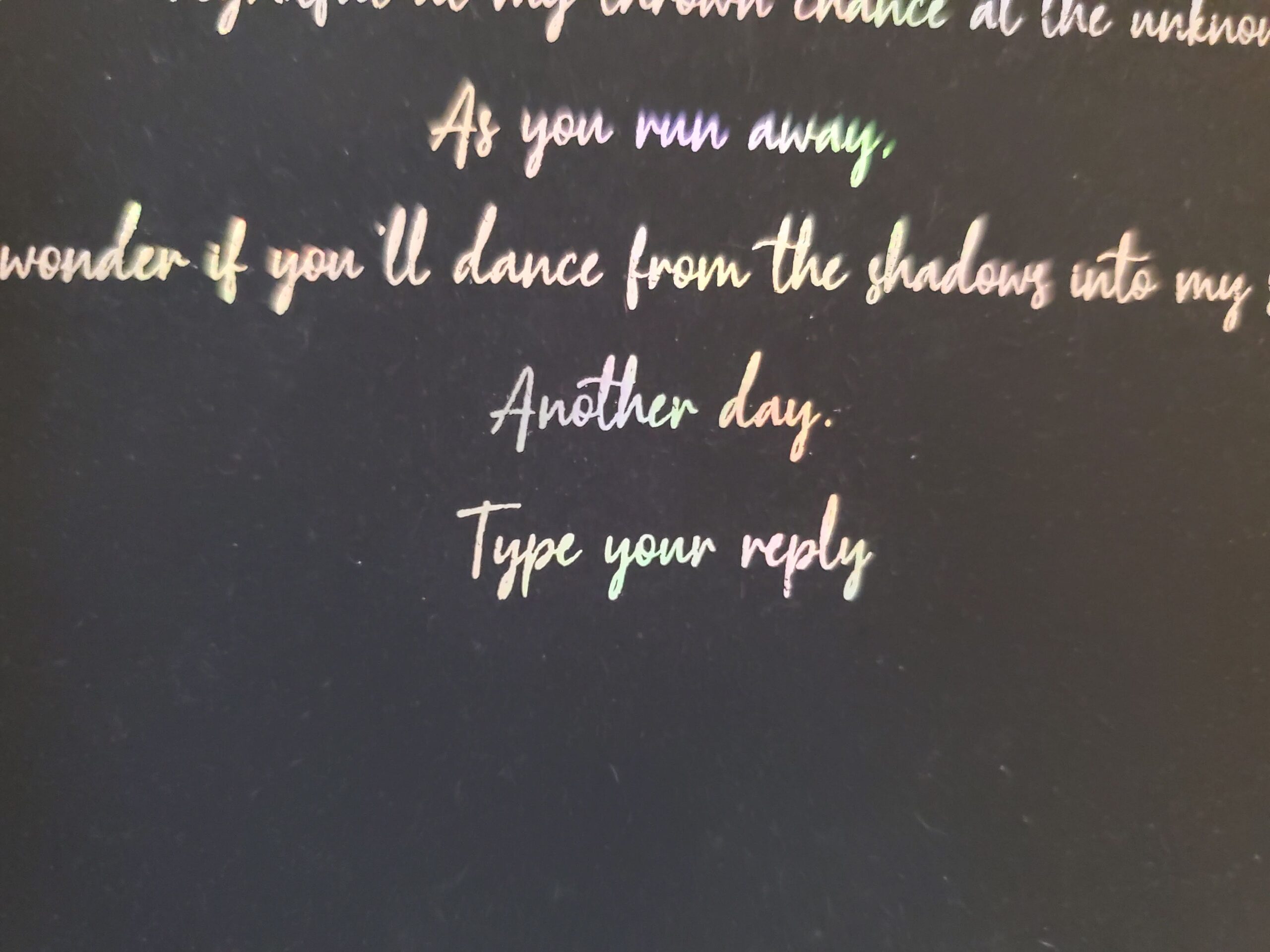 I mean, the person filling the order should probably check on that too… I gave them a bit of a pass in this case because they’re clearly ESL, but still…

Anyway, they have different paper types too — like, you can get it lined or blank or graph or planner or I forget what else. I never write on paper anymore if I can help it, and I don’t use physical planners, and I have plenty of graph paper should I want it… but it’s still so cool that they have all those options. 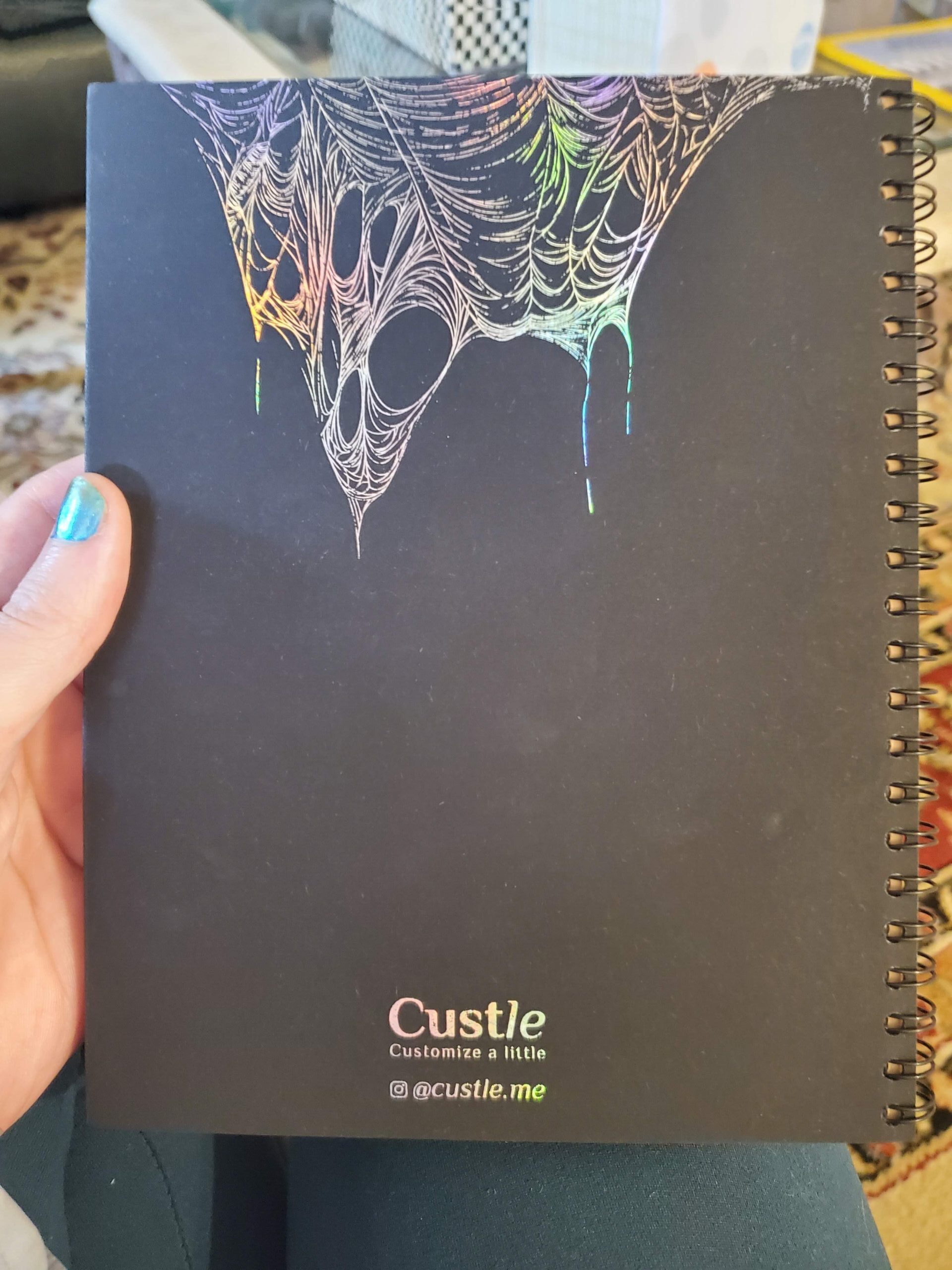 In any case, it’s, like, my favorite notebook/sketchbook in the world right now, and I’ve decided only to draw animals in it. Non-human animals, I mean. I have another design and set of colors in mind for drawing just birds in, but I haven’t ordered that one yet.

OK, moving on from that. I’ve taken a few selfies since shaving my head, as you may have observed, and in these ones I think I look pretty damn cute: 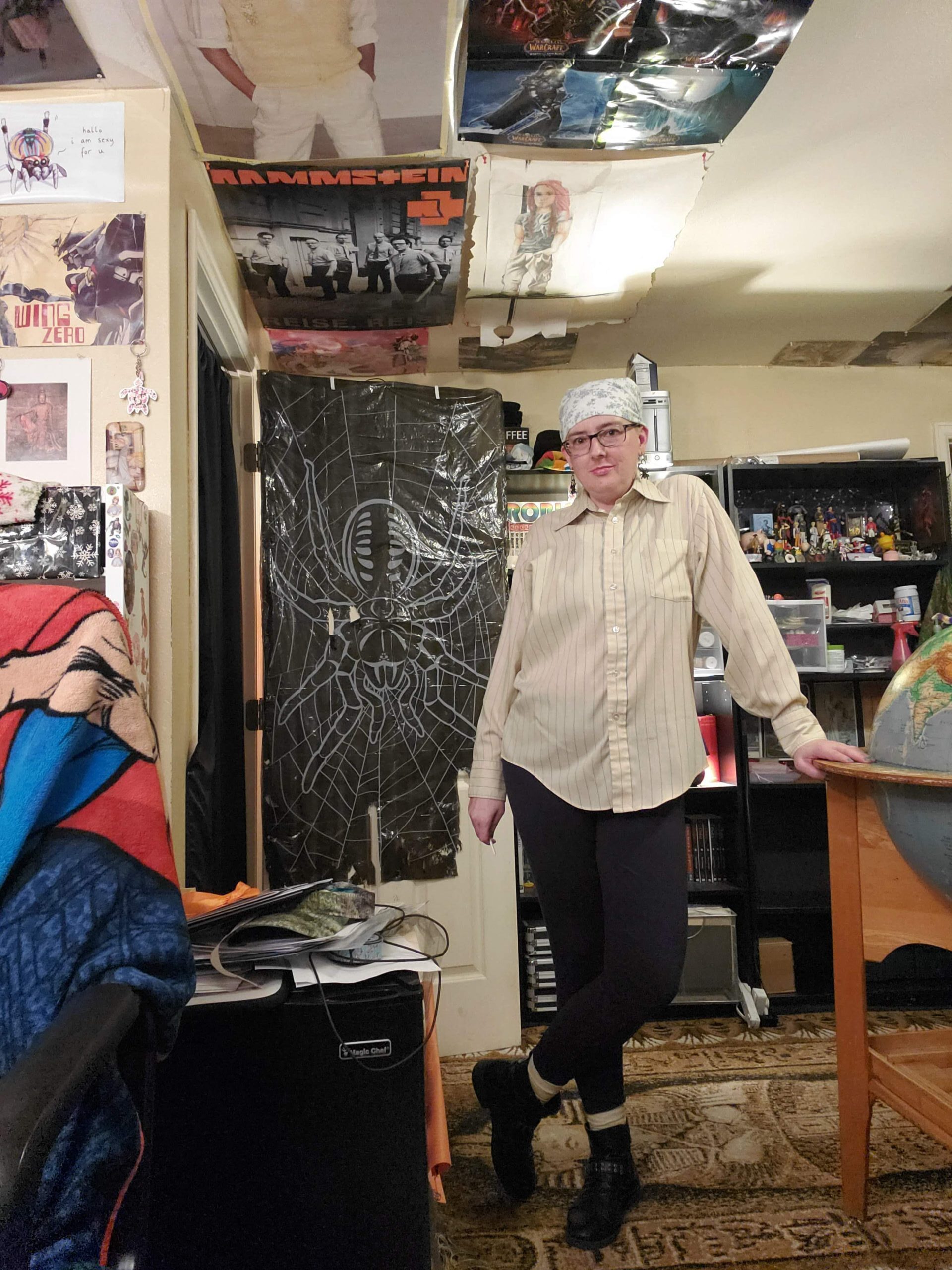 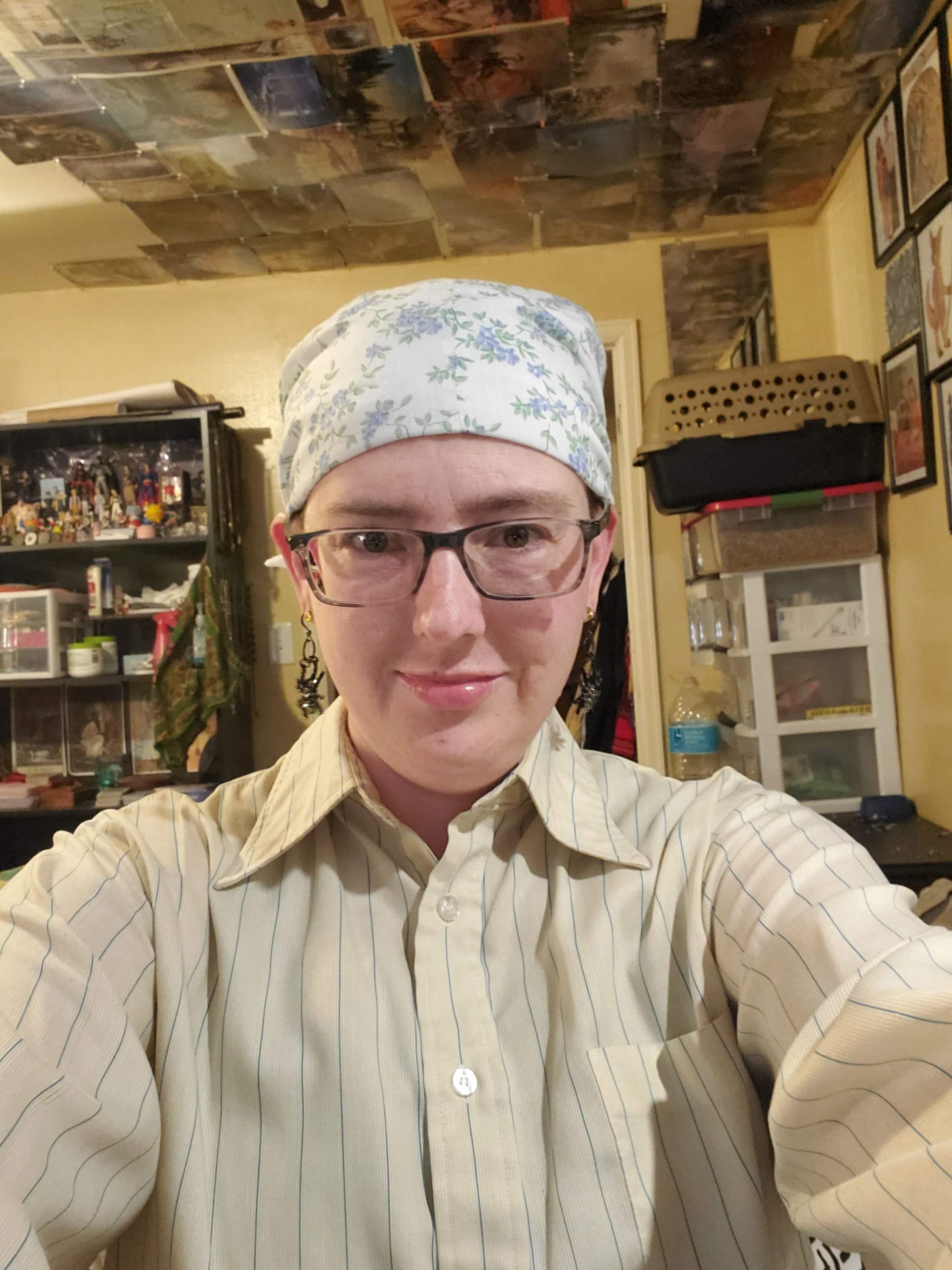 I wore my Sherlock Holmes pin with this outfit, and, oh, hey! you can see my earrings again: 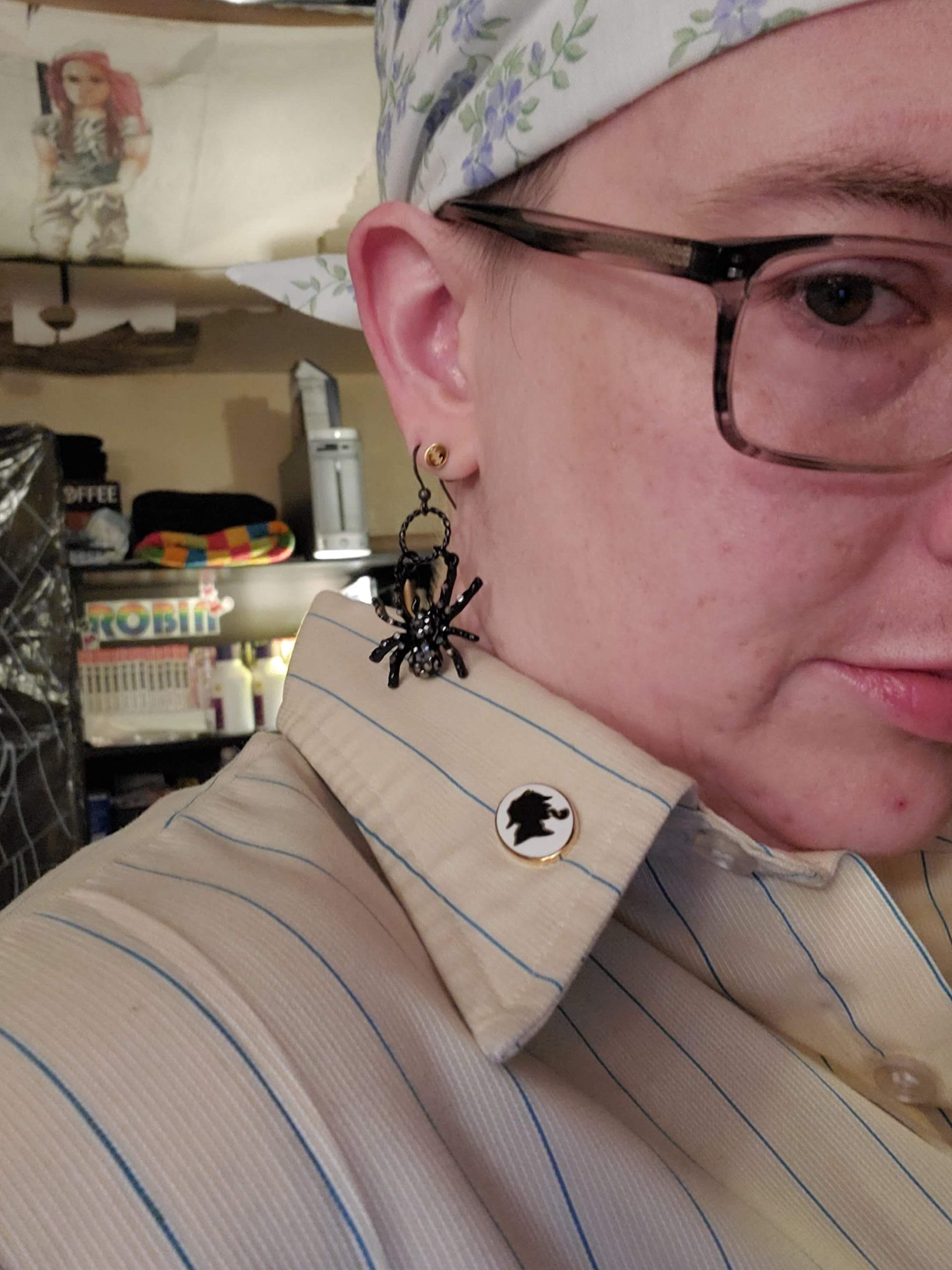 While the couch was still in the living room, Piper liked to curl up (or lie all cutely) on the end of it like this: 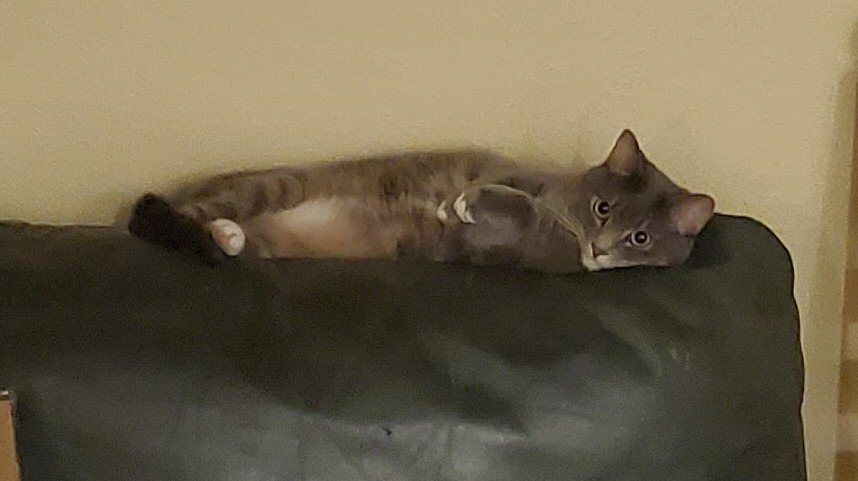 That day, I wore this cute outfit: 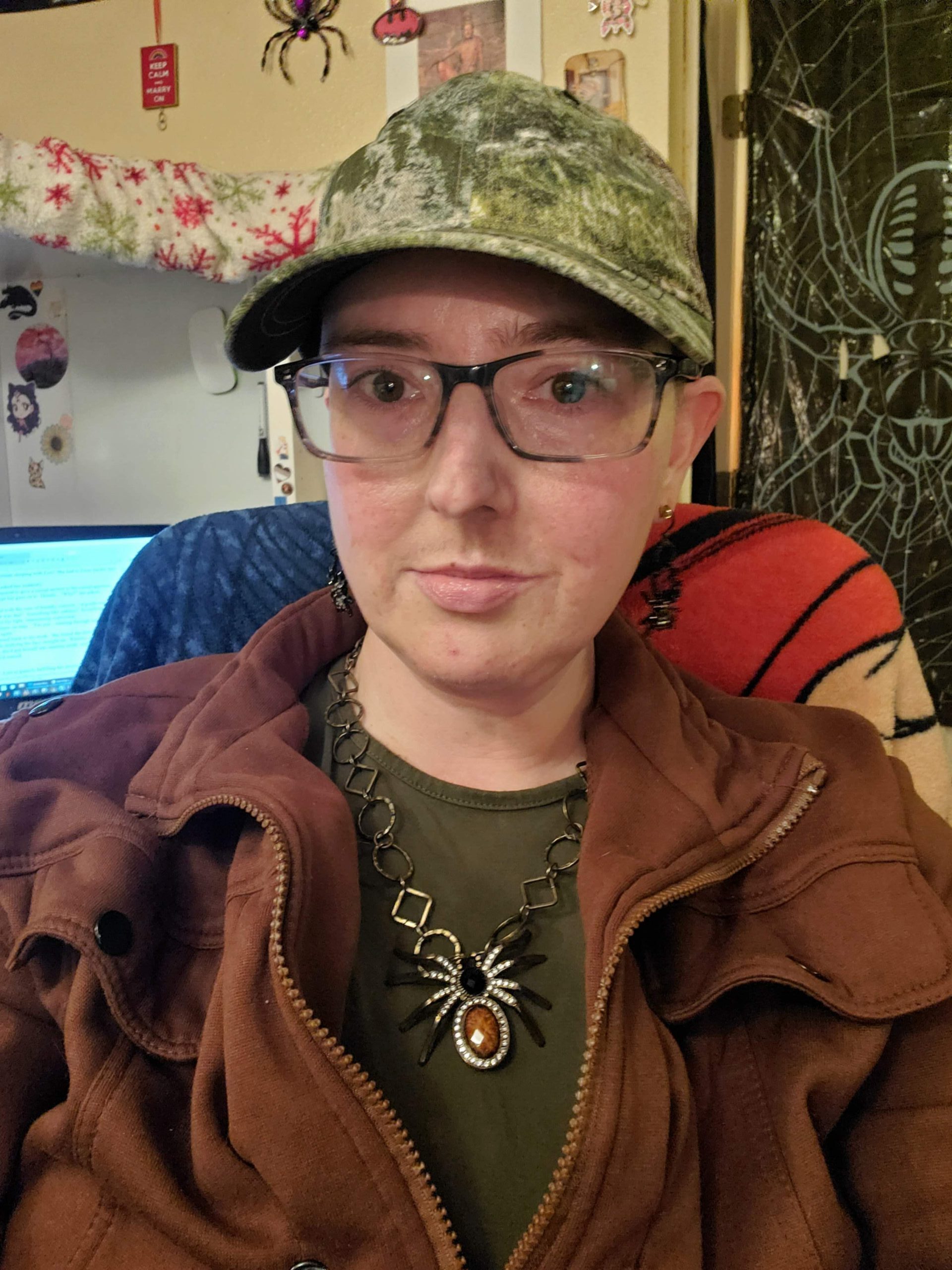 A third thing I ordered from my Etsy spider search was a lil crocheted boopspider: 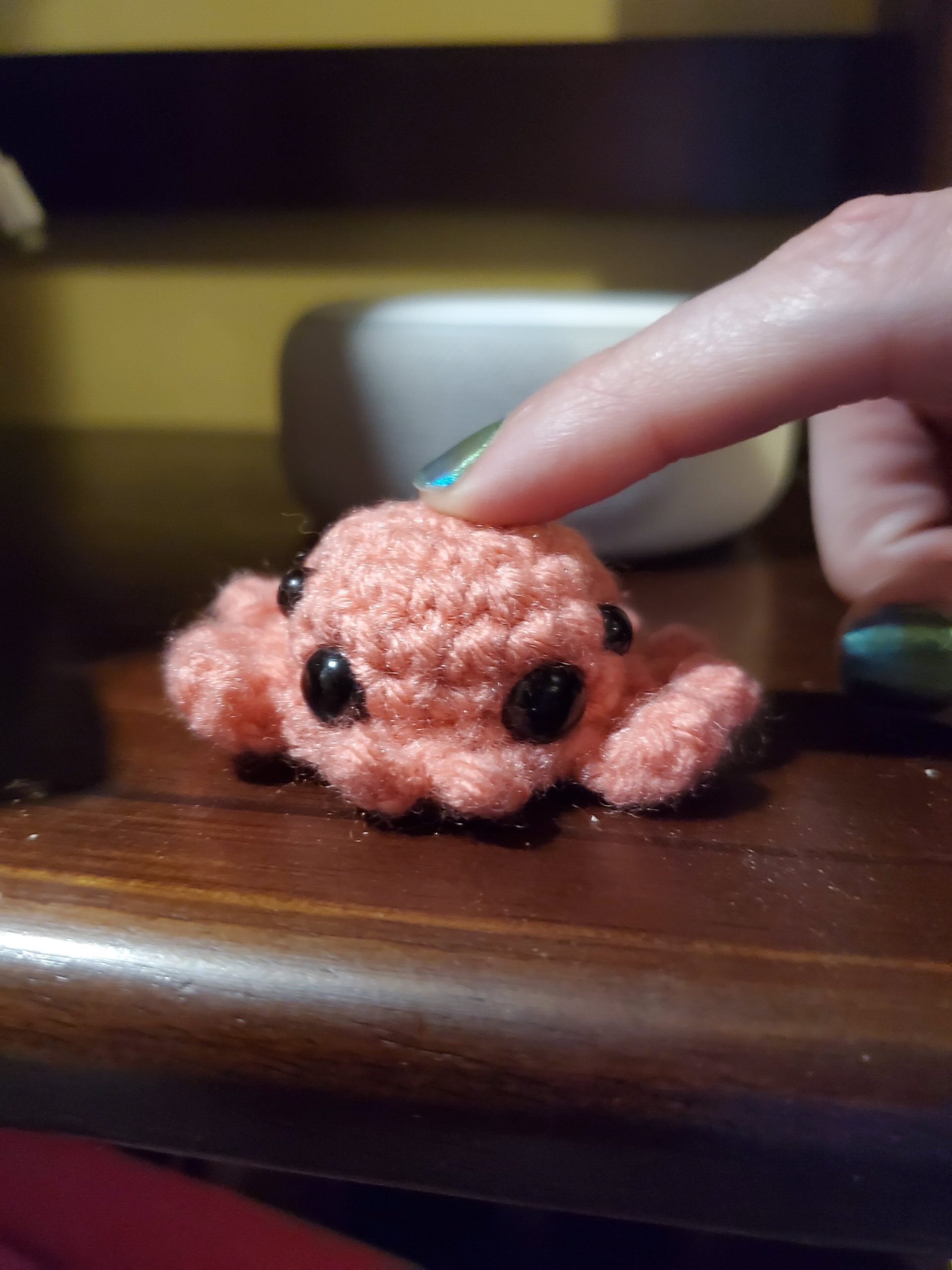