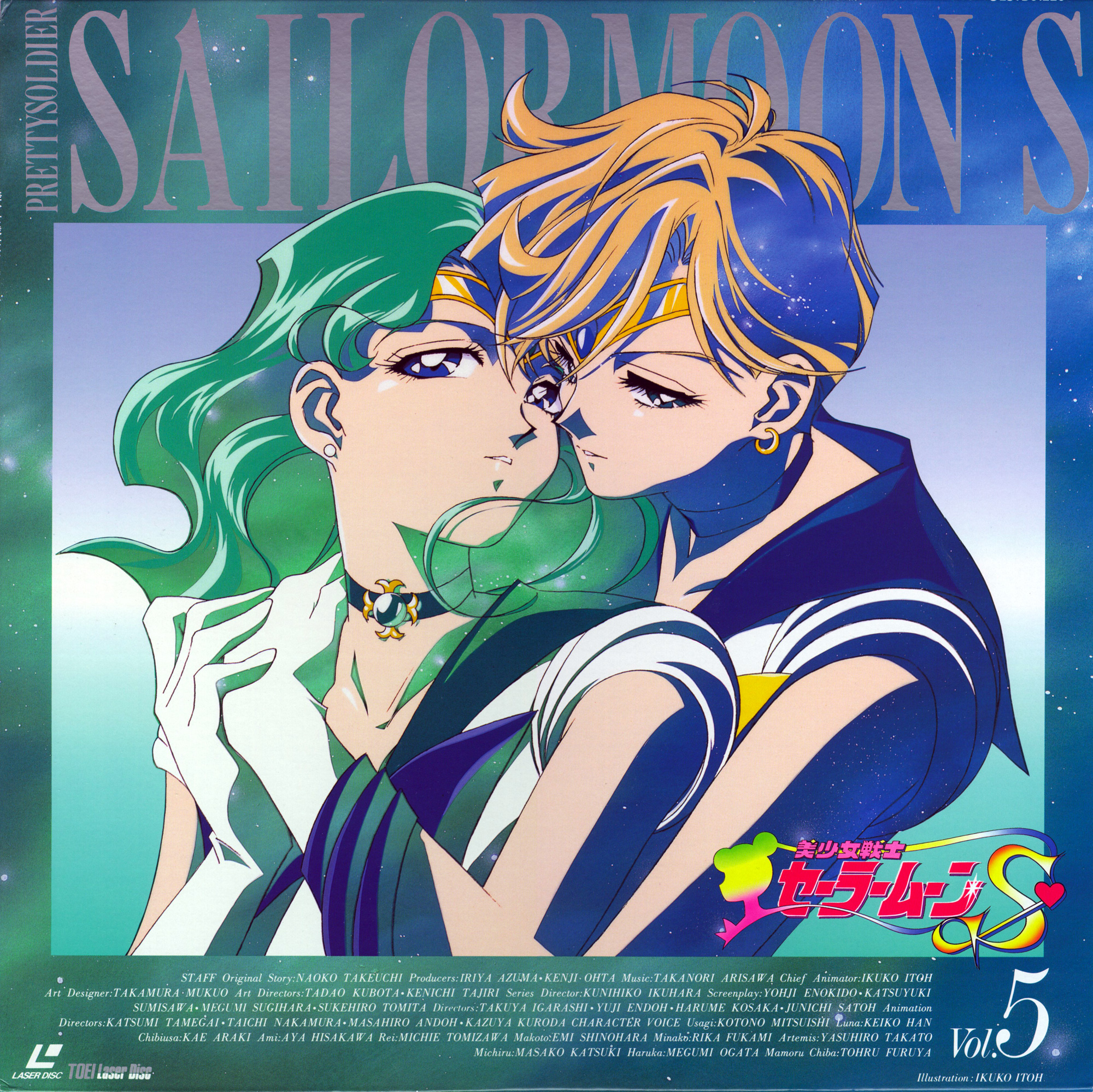 This has always been my favorite piece of official art.

Obviously this won’t/can’t possibly be a log of my entire experience with this series. It’s really more a collection of thoughts from this time around watching (which is my first time with the Viz subs instead of the fansubs I’ve been living off for decades), and the epiphany I had last night :D First off, a list of thoughts, most of them copied from texts to my sister and elaborated upon a bit.

This anime gets off to such a rough start. Some of the first-season episodes are so awkward, they feel like they were already hacked up and stitched back together poorly before DiC ever got their demonic hands on them. I feel like that’s the case with so many TV series, which is inconvenient because if you want to introduce someone else to it, you have to keep saying, “You need to know this stuff for later, so we can’t skip this; I promise it gets better.” And it certainly does! By the final episodes of the first season, the animation and writing have improved so much that you almost wouldn’t know it for the same series.

The senshi and Luna so often call out each other’s civilian name… For some of them, that doesn’t narrow it down much on their other identities, but I can’t imagine “Usagi” is particularly common. And they basically transform wherever they want. And Luna just talks all the time. It’s kindof embarrassing XD

Addendum to the above: from beginning to end in this series, who knows whose identity is very poorly handled. Until someone is astonished at discovering that so-and-so is Sailor such-and-such, you can be easily forgiven for thinking they all already knew. Obviously, of course, the magics make Sailor Senshi unrecognizable as their identical civilian selves, but, aside from the aforementioned indiscriminate shouting, there are so many moments where no care is taken to establish the fact that character X is out of sight or earshot before a transformation, and so many moments of suspicion that are simply let go of and moved on from. I find it especially egregious when Chibiusa doesn’t know her friends are Sailor Senshi… a fact the viewer doesn’t even realize until she sees Usagi transform halfway through the season.

And Usagi just wanders around shouting at everything.

But I love it when Zoisite does a move and says a tiny little “Zoi.”

I completely skipped the haunted house on the beach episode.

When a rainbow monster is a woman, the crystal comes out of one (1) boob.

The ferris wheel Mercury and Urawa are standing in front of says “Sunpaleets” on it in big cheerful letters. The only thing I can think of is “sun palace,” but I would expect a different spelling for that XD

Poor Mercury is always stuck as the debuffer until she gets another attack.

The subtitles are bad, but they’re no worse than a lot of other anime.

Addendum: allow me to reiterate: the stupid, stupid use of “guardian” for “senshi” does not apply to the original anime, and retconning it like that is totally incorrect. The use of that term originated with (appropriately) PGSM after the original anime had gone 200 episodes with the correct translation in promotional material, background vocals, lyrical songs, and so on.

And I still don’t get why subtitles (and dubs, honestly) can’t just include honorifics instead of doing gymnastics with the translation.

I think it’s so sweet how much Luna loves Usagi.

Haruka’s introduction certainly isn’t the only moment in fiction that conflates skill in an advanced field with skill at a simulation of an advanced field, but it’s pretty stand-out. I’m always reminded of that Clerks – The Animated Series episode where Randal got taken away to break rocks because he was good at a rock-breaking video game XD

(My sister’s phone was broken for a while in there, so I kept my thoughts to myself a bit.) And now for the epiphany!

So the first season has the problem I mentioned above of taking a pretty long time to get its bearings. But I love to see the team come together and the origin story play out, and I love Kunzite and Zoisite even if I’m indifferent to the rest of the Dark Kingdom. So I like the first season OK. In R, I don’t mind the Makaijuu arc (except the absolutely idiotic Tsukikage no Knight), and I like those villains. Then I’m largely indifferent to the Black Moon clan, but I love Chibiusa. So I like the second season OK.

SuperS has always been my favorite season, because 1) there’s only one story arc, 2) it has my all-time favorite villains, and 3) I still love Chibiusa. SailorStars is my second-favorite, because I love the Starlights, my favorite characters Haruka and Michiru return (and episode 198!! T_____T), I love most of the villains, and I adore the ending. But it does have that rather tedious Nehelenia arc at the beginning, which shortens the part with the Starlights et al, which makes it less a favorite than SuperS.

So why, I’ve always wondered, isn’t S my favorite season, when it’s so focused on my favorite characters, has a fairly contiguous storyline, comical villains, chibilesbians in addition to the full-size ones, and that cathedral episode that makes me cry like a hungry baby? I like it more than the first two seasons, yeah, but you’d think I’d like it best, given all it’s got going for it. And I believe I’ve finally figured it out.

Haruka and Michiru (in whichever form) mean a lot to me. There’s a beauty and fascination about them that far exceeds anything else in the series. I’ve talked before in AEL’s (primarily regarding SKU, I think) about the difference between liking or even adoring a work of art and feeling a bone-deep and wildly fanatical connection with it as if it’s a part of the fabric of your being. I adore BSSM, but my feelings for Haruka and Michiru are so much more. Not only are they breathtakingly gorgeous and elegant visually, their relationship is totally engrossing and interesting to track; their love is so wonderful. It was that relationship that made me think, “I want exactly that; oh, I must be a lesbian.” (Which I am, even if I can throw other words in there as well to describe my orientation.)

And I think it’s precisely because I love them so much, and spend every moment they’re onscreen analyzing their relationship and their attitudes all over again, that I find the S season disappointing: it’s the contrast. Nothing else in the series, to me, can measure up to the S-season scenes that include Haruka and Michiru (though SailorStars scenes with them come close XD), so every single time it switches from something about them to, for example, Professor Tomoe playing Twister or even my beloved Chibiusa trying to make friends — scenes I would be perfectly happy to watch in another season — it’s like a blow. It goes from a very high endorphin release to one much lower (which would, under normal circumstances, be not only adequate, but delightful), and it almost makes me angry.

This rewatch is due to needing to rewatch BSSM whenever I feel like it chemo sometimes knocking me over badly enough that I can’t even sit up and my needing to watch something on my phone lying down and American Horror Story becoming too tiresome with its racism etc. and disappointing season endings. I leisurely worked my way through the first two seasons and the R movie, and then hit S and just went wild. I’ve covered waaaay too many episodes in a short period of time. (Too many because I haven’t bought the DVD’s of the Viz release for SuperS yet, so I’m going to run out way too soon here.) Last night I didn’t even need to watch one, because I was fine sitting up and being productive, but I knew it was the first meetings of Haruka and Michiru flashbacks episode, and I couldn’t stand not to watch it.

So the episode begins with Haruka saying existential things and catching my interest and then looking very, very beautiful in a short blue dress and scarves or something. And then it switches to Professor Tomoe, like, running on a treadmill and being silly about it, and I actually felt betrayed. Like WTF IS THIS ACTUAL SHIT. And that was how I came to the conclusion that what I really need is an All-Haruka-and-Michiru edit of the S season to preserve my delicate sensibilities XD XD

I mentioned the R movie, and my last thoughts will be about that. The movies have always gone in order, for me, of best to worst, so the R movie is obviously my favorite. This time I carefully inserted it between episodes of the R season where I thought it would fit. (It has to be after Chibiusa discovers Usagi is Sailor Moon, also after Usagi and Mamoru have gotten back together after the stupidest subplot of all time, but before they really head into season-end stuff.) However, watching it in such a finely selected spot drives home more than ever that, however much I love it, it simply doesn’t fit into the timeline of the series and is, in fact, an AU.

I can’t remember what-all thoughts I had on this, since it was while my sister’s phone was broken so I wasn’t writing them down XD But I do recall a few of them. First of all, this movie lifts visuals and concepts for scenes right out of the series, but does them better (better animation, better placement, etc.), as if it’s a Greatest Hits of the first two seasons rather than a story that fits into the first two seasons somewhere. Secondly, in contrast with Usagi’s gradual but definite growth as a soldier throughout the first two seasons, she goes through a much quicker character arc in the movie that again reads like a Greatest Hits and is simply out of place in the midst of her more medium-grade development in the series.

Third, Venus-chan (I love it when Usagi chans the other Senshi XD) seems to occupy a position of leadership among the Inner Senshi, at least to a certain extent, whereas that aspect of her character was entirely written out for the series — she’s limited to just having more a little more experience since she was Sailor V first. Fourth, Fiore is evidently of the same species as Ail and An, but their backstory doesn’t fit with his. Fifth and finally, the whole deal with each of the Inner Senshi being ~alone~ and even somewhat ~persecuted~ until Usagi found them doesn’t quite gel with what we see in the series before or after the point where this movie vaguely fits. Taking the movie as an AU, it works just fine… but trying to shoehorn it into the series with the message that none of these lasses had any friends, and people were always mean to them, prior to their becoming friends with Usagi, makes zero sense.

So, yeah. I love the R movie, but… I kinda think the title is misleading? Not that it’s called anything more than Bishoujo Senshi Sailormoon R, but in this one thing I think the Dub That Must Not Be Named did a good job: give it a separate title of its own — like the musicals! — so it can be distinguished from the series it’s kindof attached to.

Joy To My Life | Series: BSSM | teh ghei