I haven’t taken very many photos this last month, I think mostly because the cumulative effects of chemo have had me feeling worse for longer than in any previous stage. But I only have one cycle (three treatments) left! We’ll see if being finished actually increases the number of photos I take, though XD

Of course we lead with Little Animals: 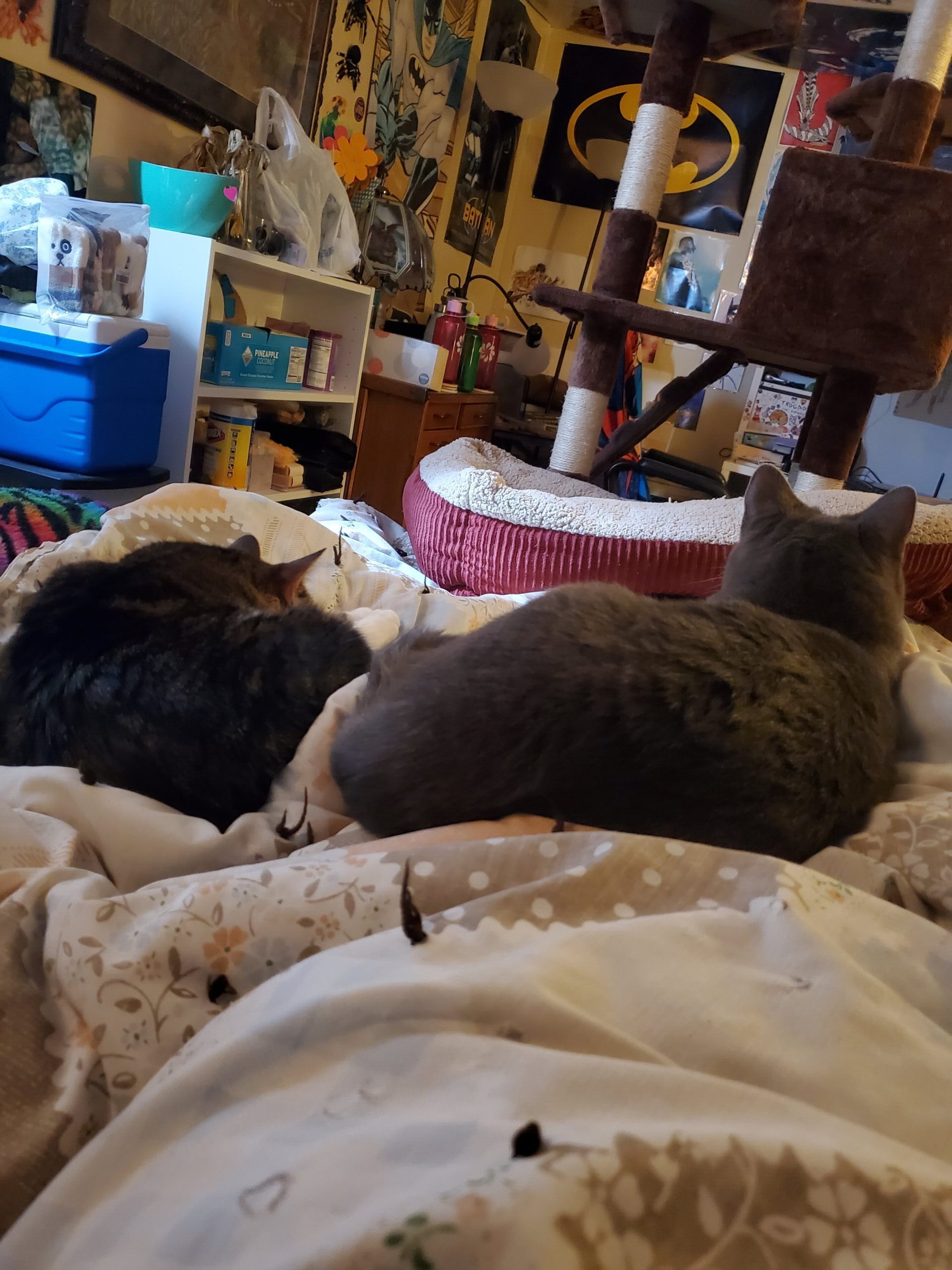 On this day, I went to a park to meet a Discord friend, which was fun. One fun thing about it was this harvestmn that started climbing up my leg. I got it on my hand to try to put it on the ground, but then it climbed up my arm and neck and ear and onto my yellow headcovering. There, it settled down. 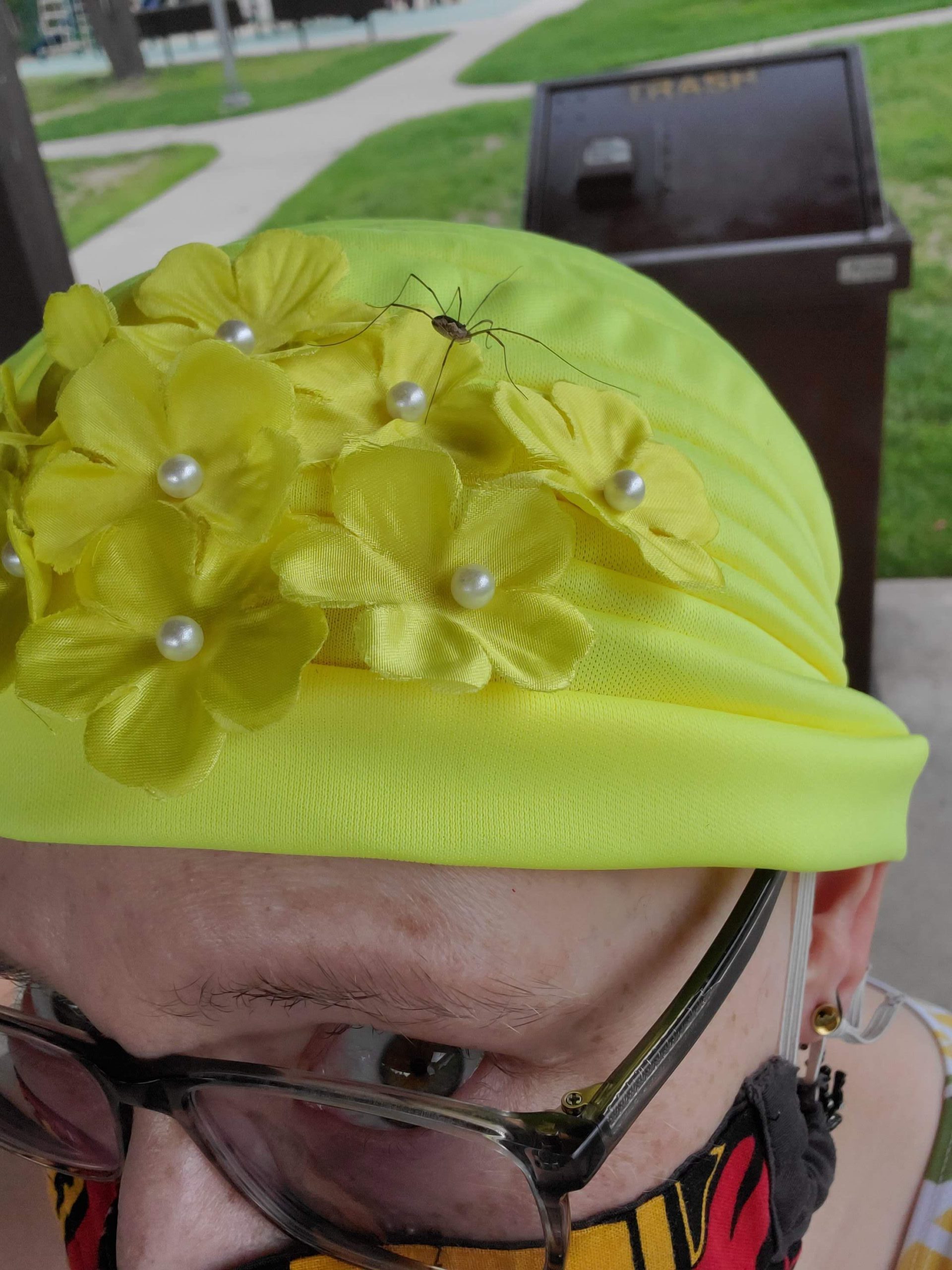 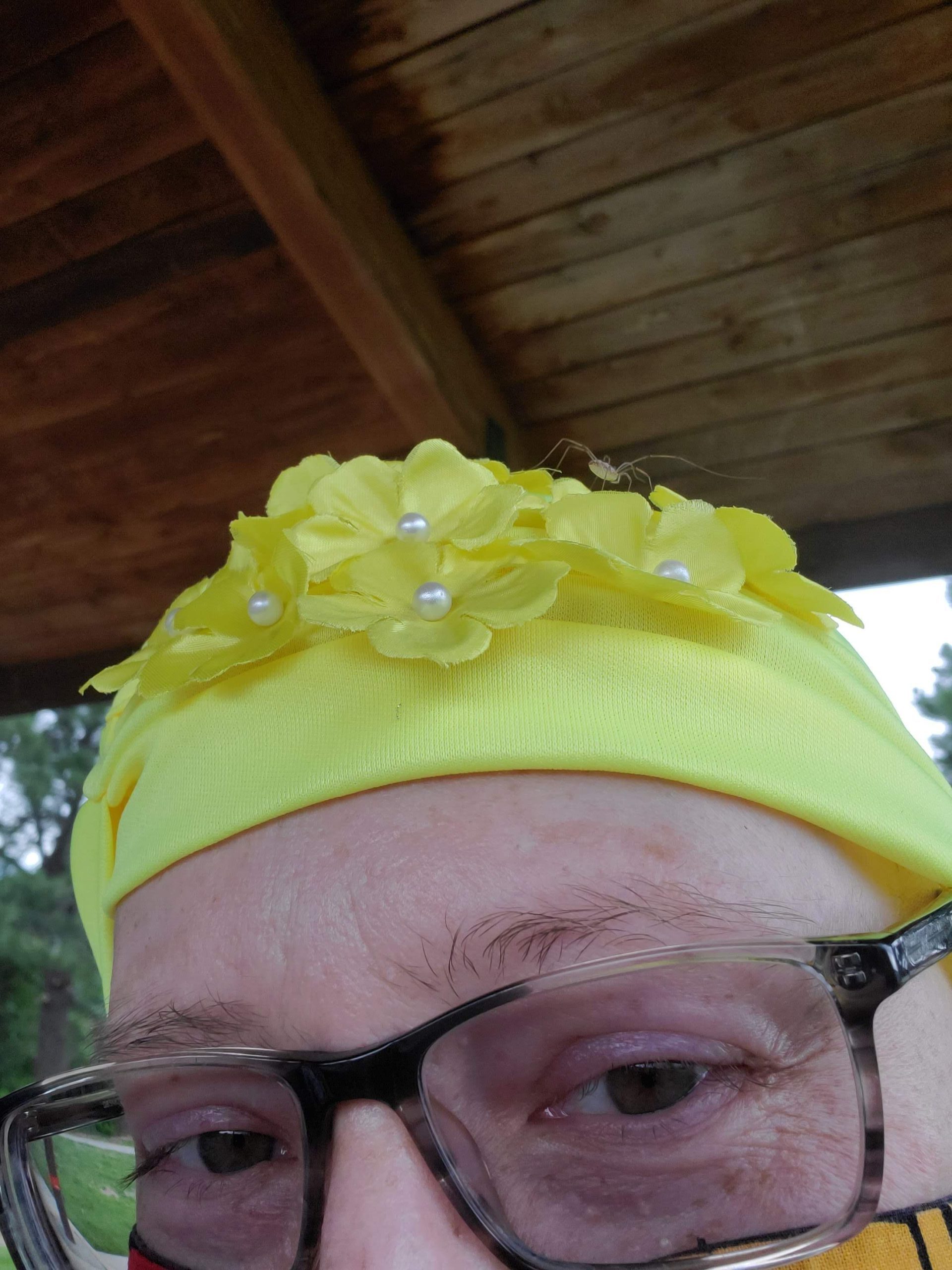 It stayed there for at least an hour. How freaking adorable is that!! When I got home, before I went into the house, I asked my dad if there was still a harvestmn on my head. There was, and he swiped it off somewhat roughly before I could tell him to be kind to it. I hope it was OK.

That same day, some cats: 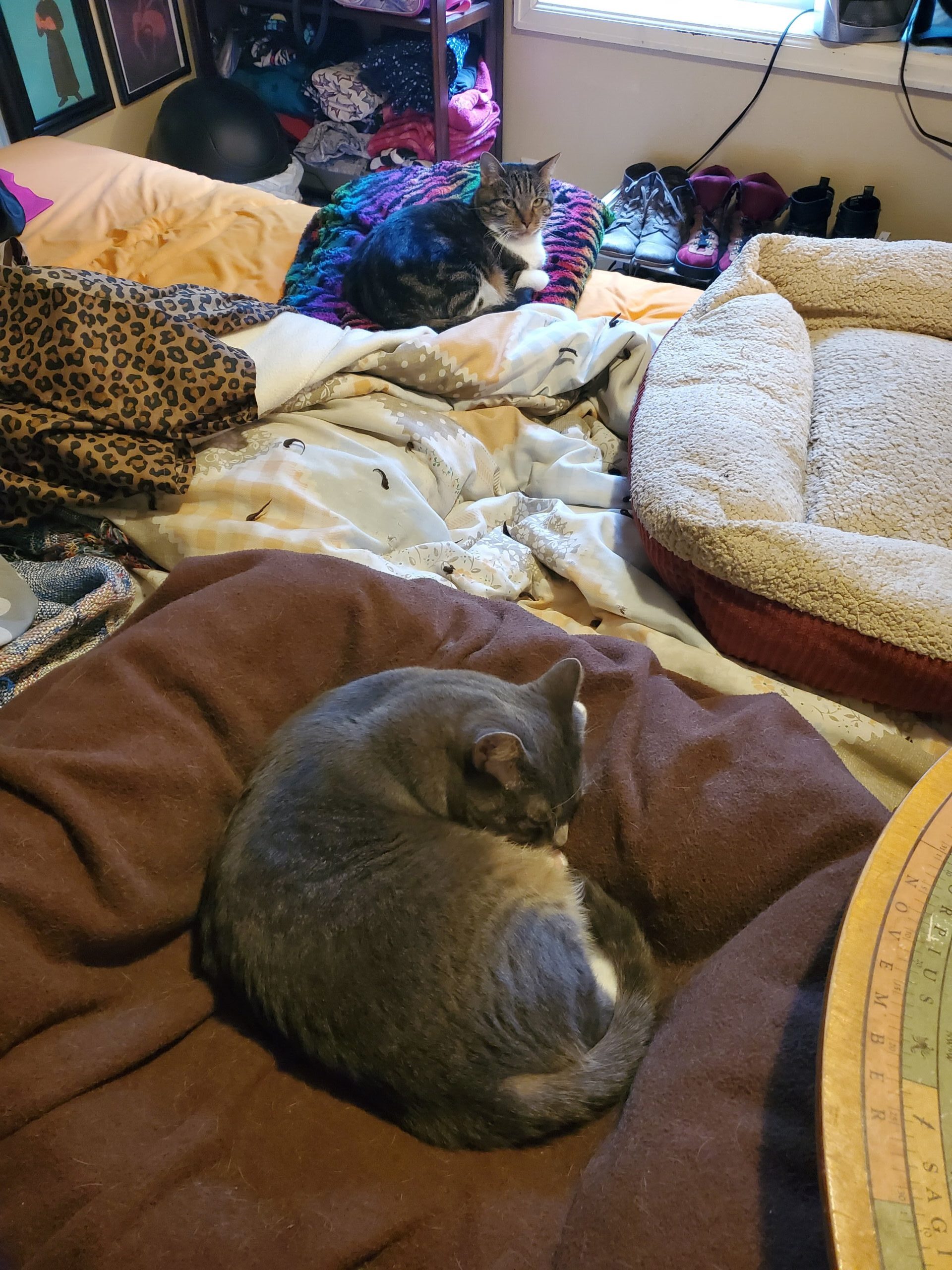 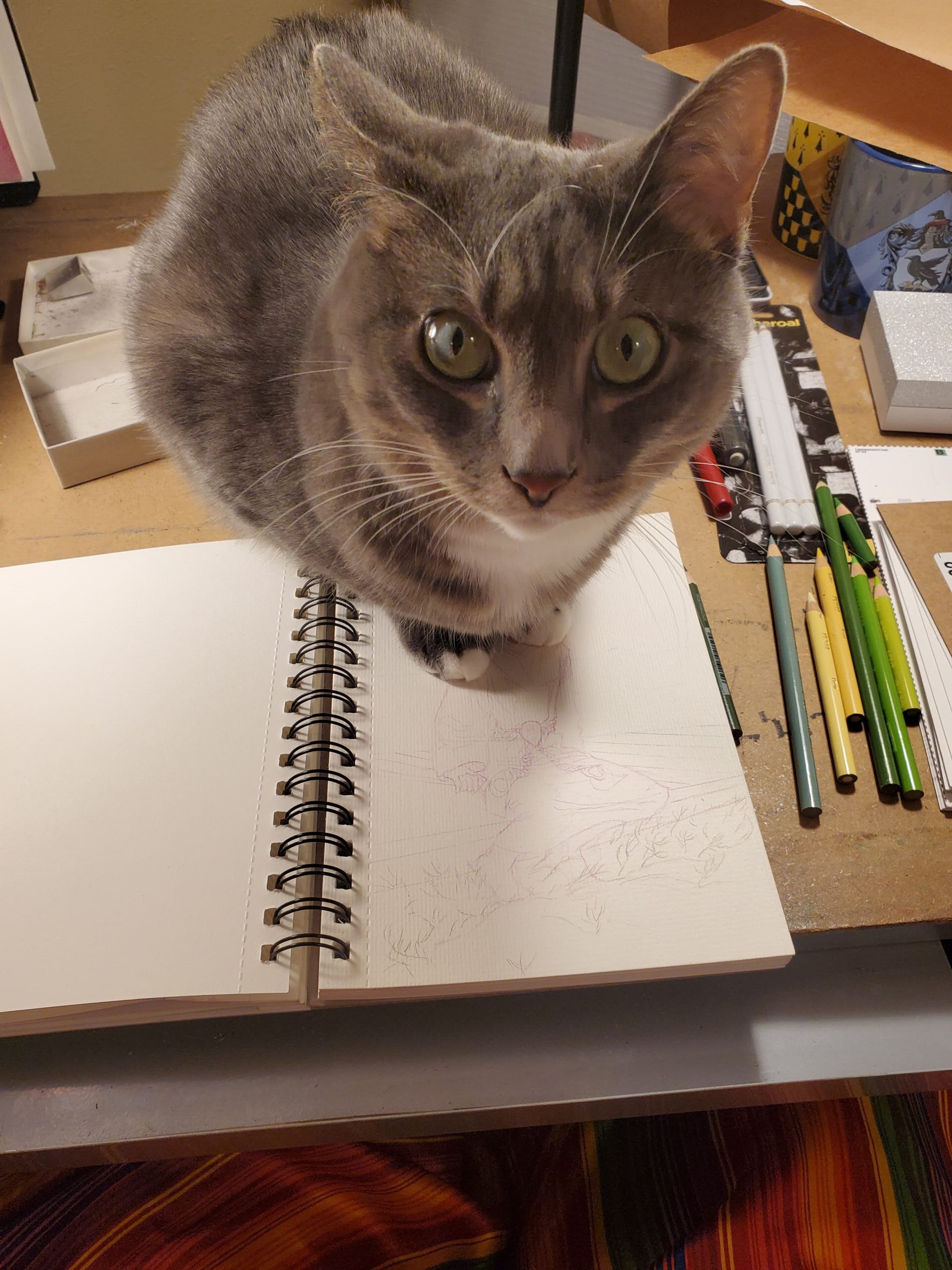 You can tell she does this when she thinks it’s time for me to feed her.

Not far into the tiling process in the living room, Piper found this tool-carrying/storage, um, thing, and decided it was a good place for a nap: 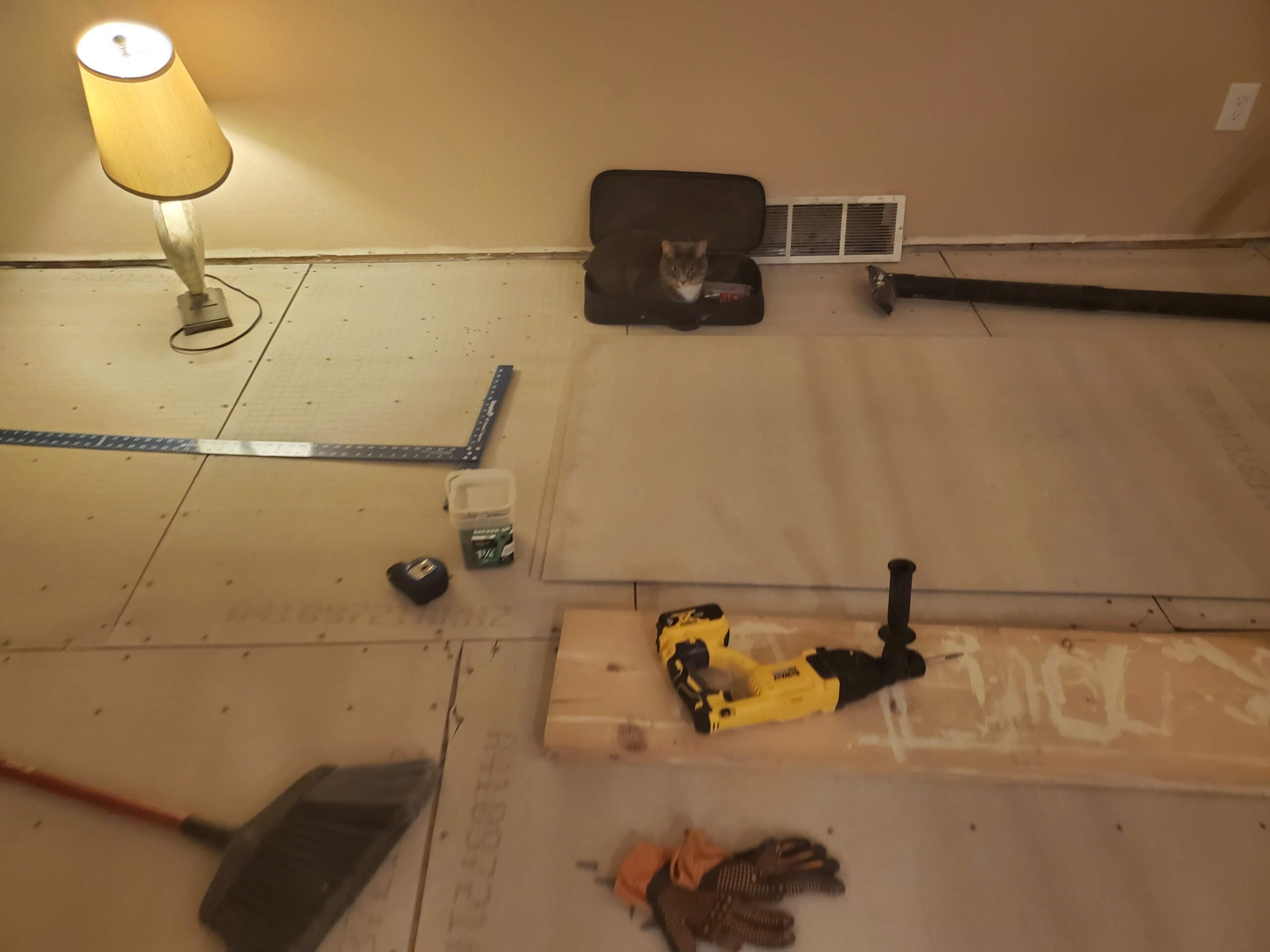 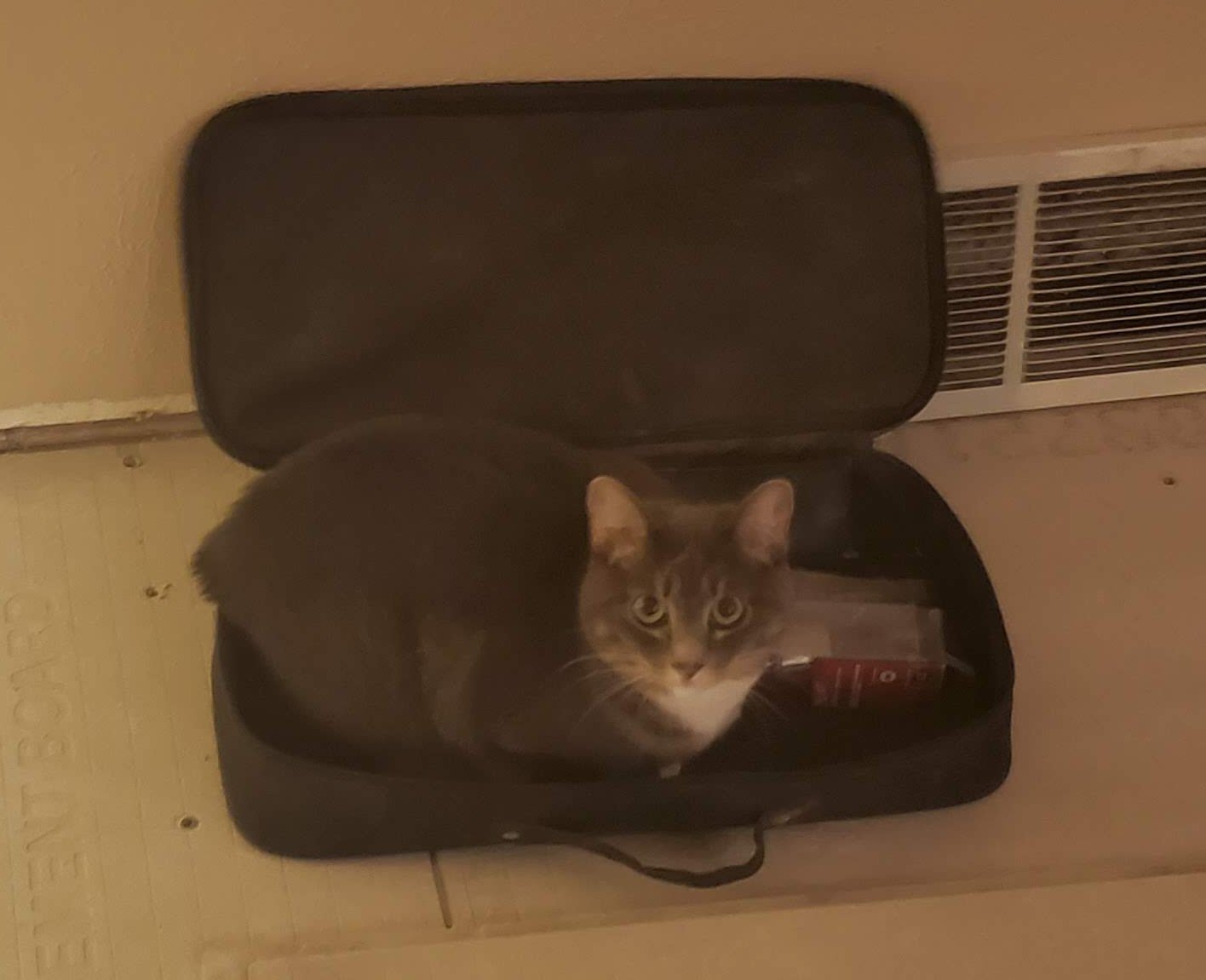 On the way home from chemo one day, I saw this cool arrangement of clouds on the mountains: 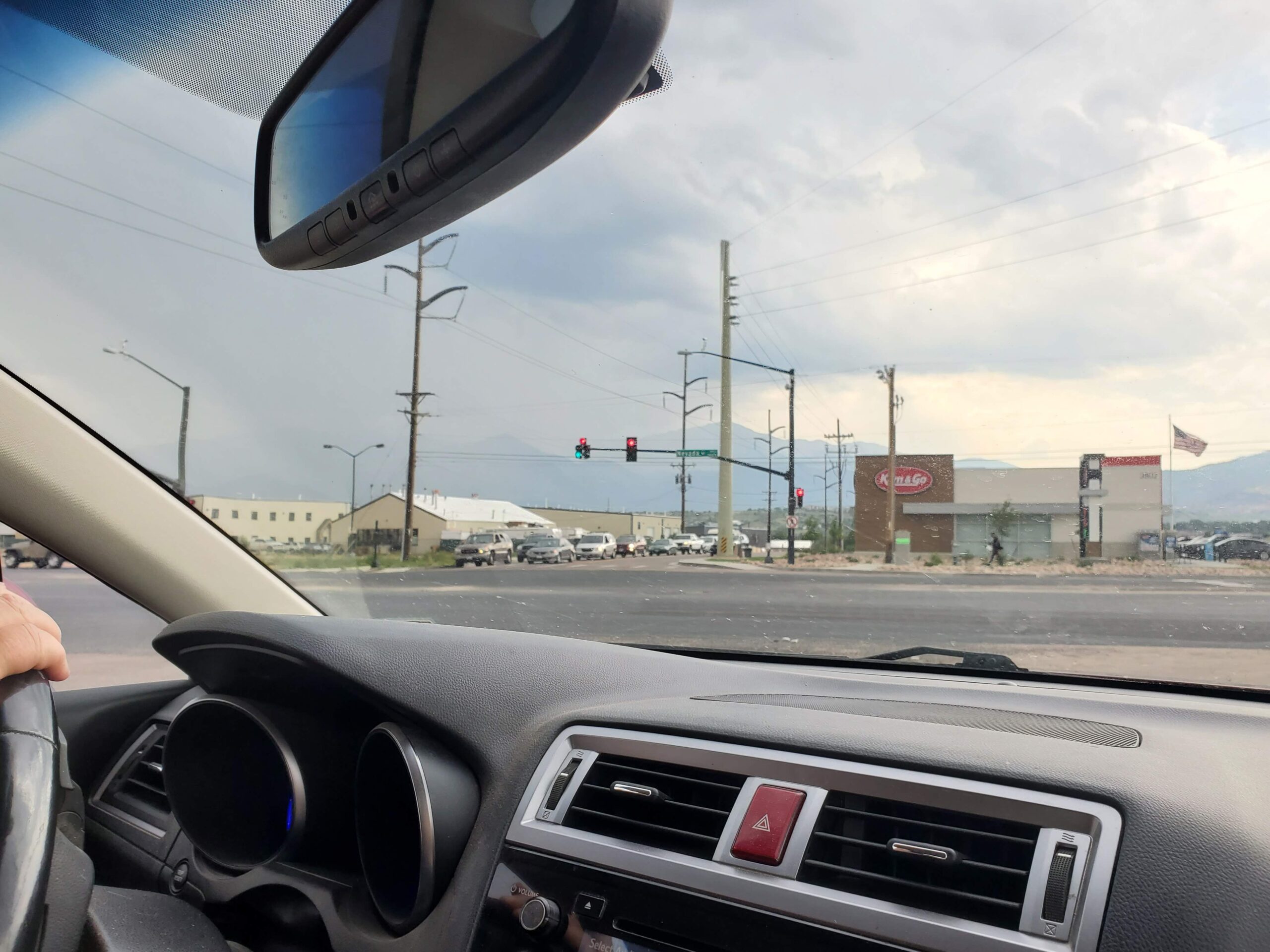 Photos through car windows are never ideal, but I may still work off it sometime for a painting.

I have no tops that go well with this skirt– 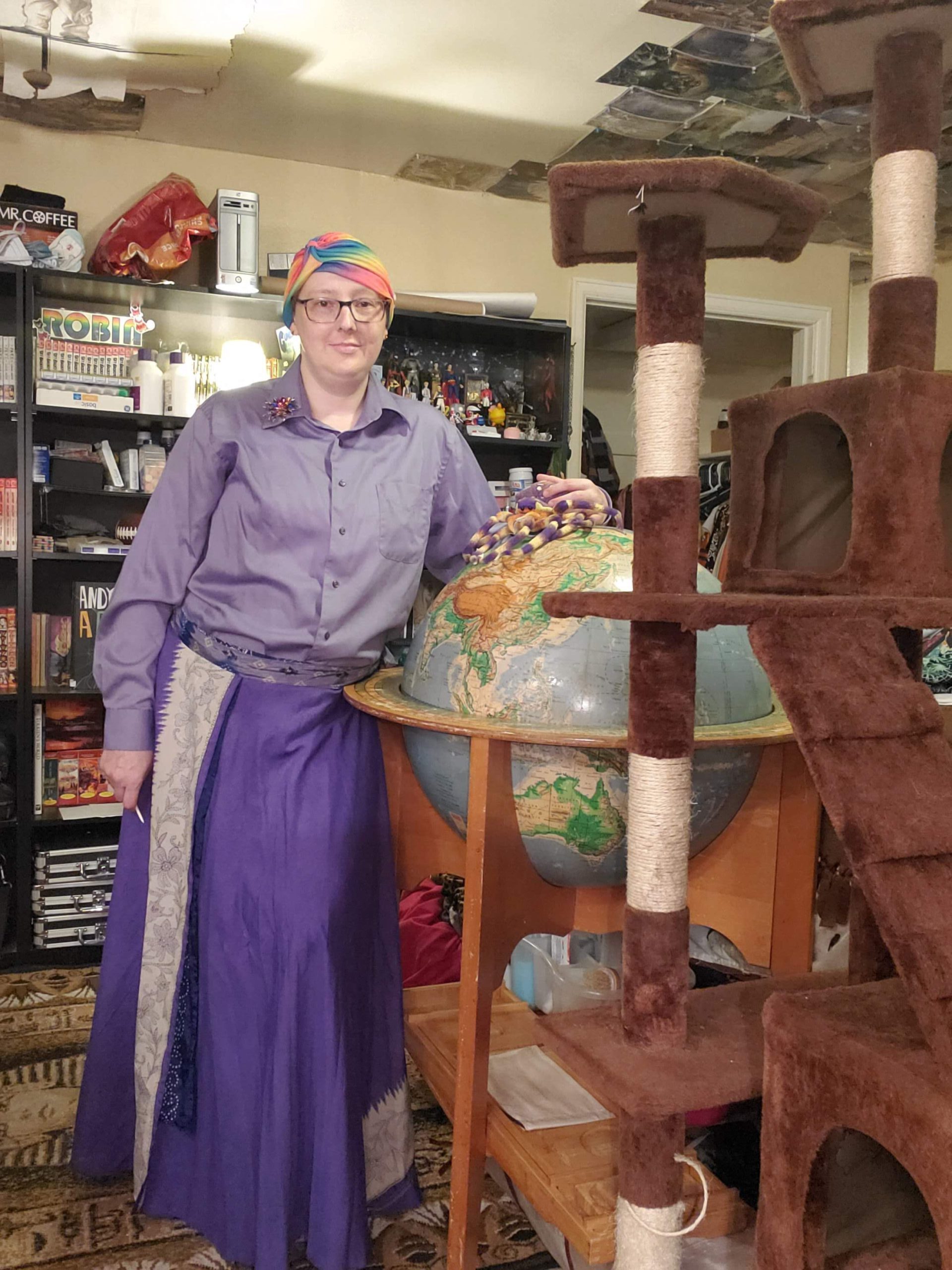 –but I wanted to wear it, so there it is with a button-up that looks kinda weird. And rainbow accents. 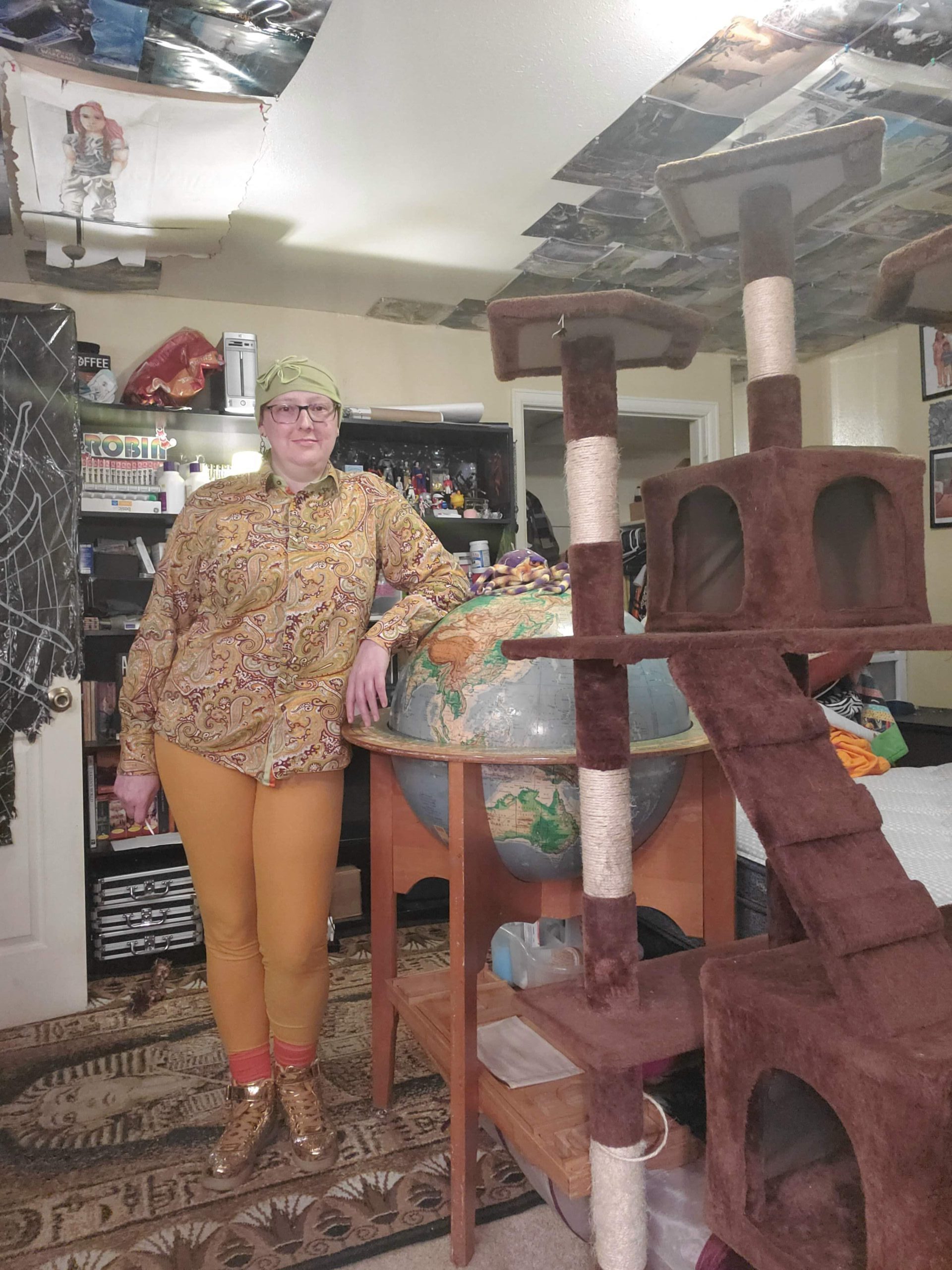 Most of the time, my fat thighs provide me only with amusement because they’re soOoOo big. I can’t even circle them with both hands XD But in these particular orange leggings, I think they look so cute.

Lots of story for this picture. First of all, one half of the living room was tiled by this time. With the paint colors mom and I chose for the walls and ceiling and moulding, it looks fantastic. Anyway, the kitchen is being remodeled later (in September, I believe), so the tiles stop in the middle of the room for now. Which provided a whole column of uncomfortable edges to stub toes on and trip over. So parents bought a long rug to cover that up with. And the animals like it, so here’s Beeky Bean Dog being slugdog chinrest on it: 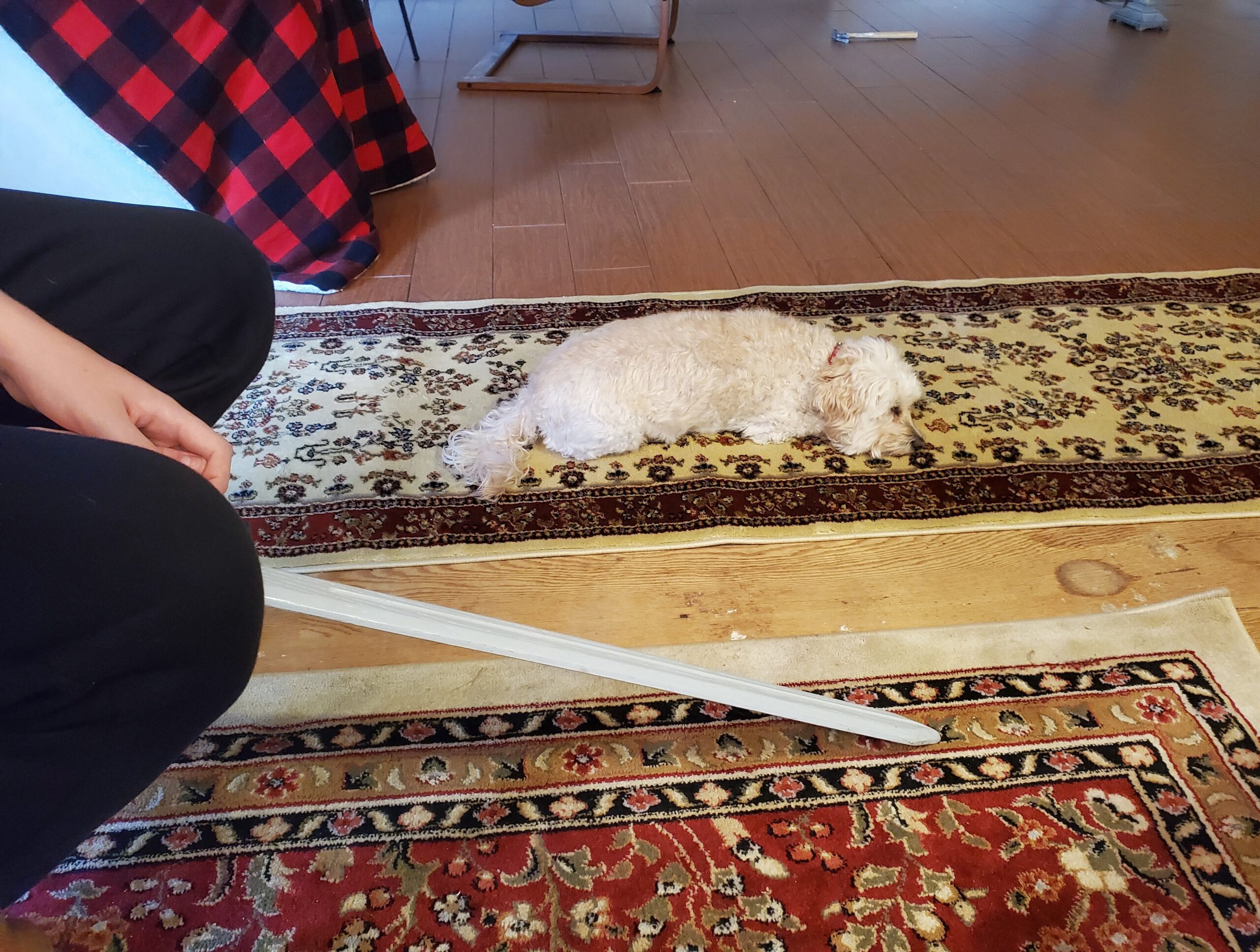 Very naturally, Damien’s Oma (who also lives in town) wanted to spend time with him while he was here. She doesn’t know how to show affection to her grandkids other than by spoiling them, but it’s a grandmother’s job to do that. However, Damien is aware that Oma will buy him essentially whatever he wants, so he “accidentally” left his wallet at our house and requested presents of Oma while he was hanging out with her.

And it makes sense for a 13-year-old boy to ask for stuff that’s not quite appropriate for him to have, because he really doesn’t know any better. But in what world is it OK for an adult woman to consent to buy him throwing knives and an axe and then send him home to his other grandparents’ house where he’s staying?? Then later they went to the Renaissance Festival, and she bought him a wooden sword, shield, and spear.

So that was tacky. Otherwise, his visit was OK. 13-year-old boys are boring, but I wasn’t feeling very well, so I watched him play video games in order to amuse myself, and that was OK.

Under part of the counter, some cabinets are going to appear with the kitchen remodel. They’ll be used to house all the games we most frequently play. For now, the games are still in the old box/bench thing we’ve been using for years, and in a cardboard box. These keep getting moved around as different parts of the redecorating calls for. And one night while were were playing a game, the box/bench thing was left open. 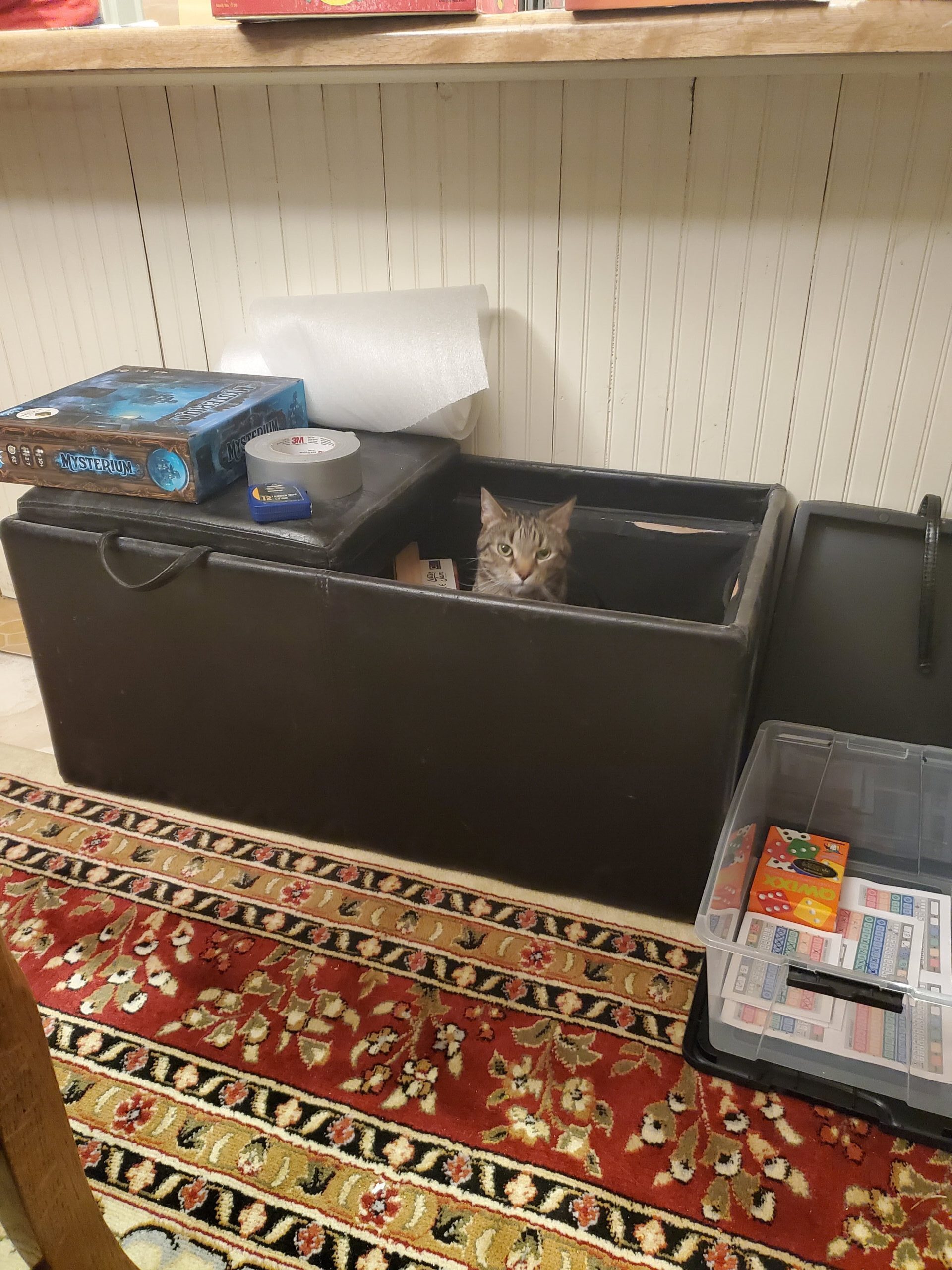 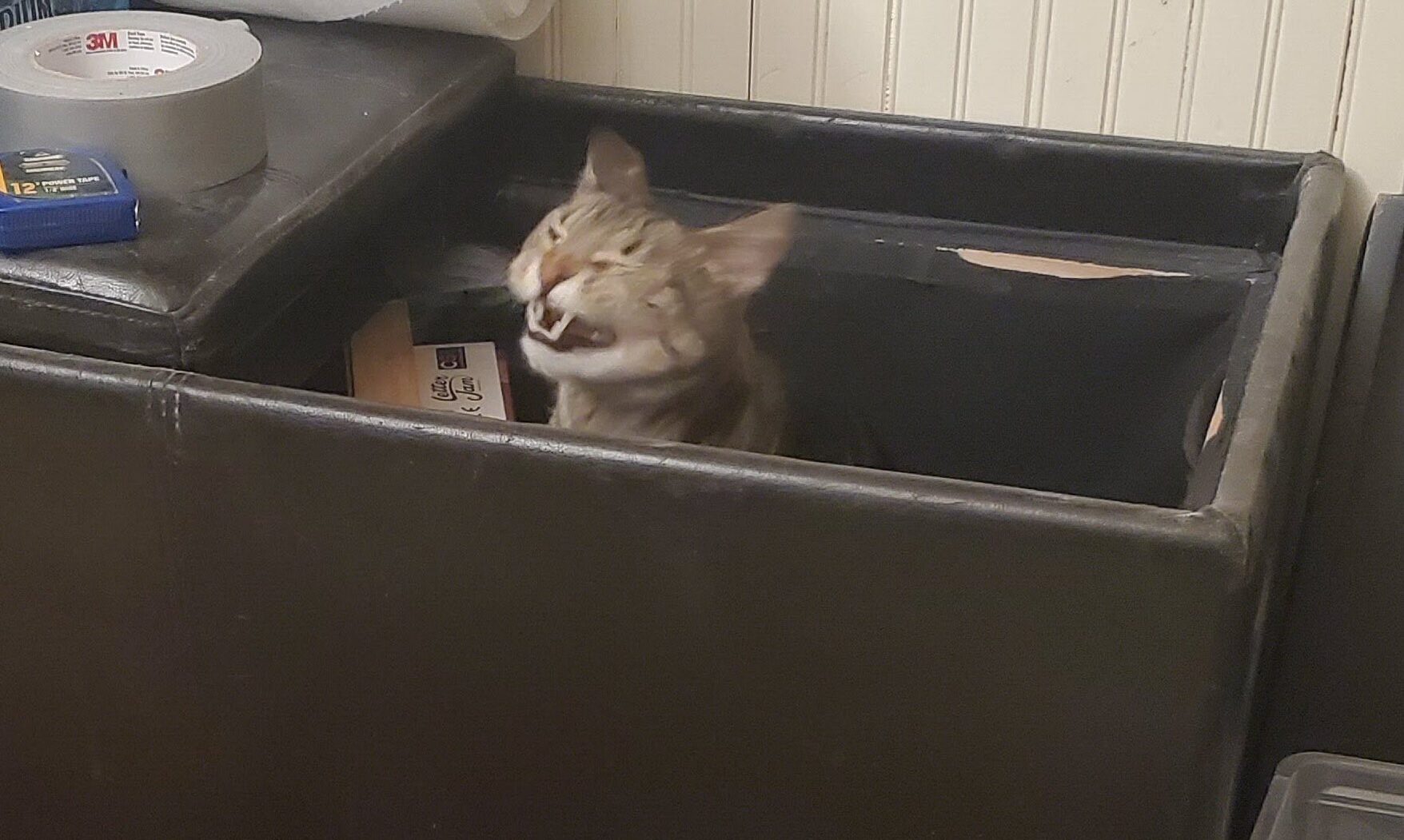 It being a box, you can see it received the usual treatment.

Here’s a possible TMI story. I have incontinence issues, and also I drink soOoOo much water while I’m on chemo. One night, I completely wet the bed. It was, like, 2AM, and I was too tired and feeling bad to take care of the problem right then; so I just threw some towels on it and went back to sleep.

The next morning, of course, I pulled off all the linens and let the mattress air out for a while (though I couldn’t feel that it had soaked onto the mattress much or at all, which was good). Then, still being too tired and feeling bad to put fresh linens on the bed, I slept for I don’t know how many nights on the bare mattress under just a blanket. Sometimes it was freezing cold, but I had to wait until I was up to putting it back together. 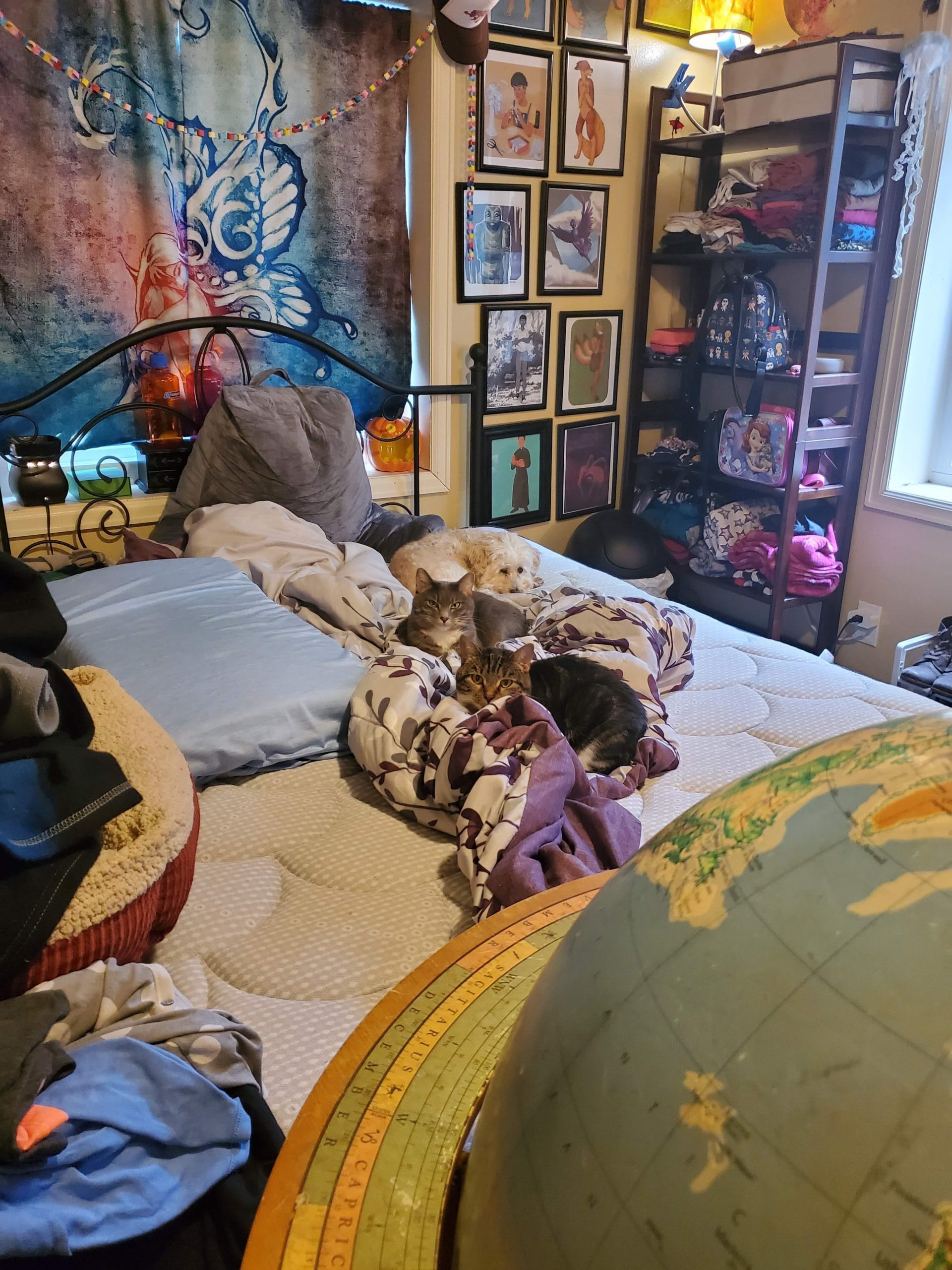 Part of my bed makeup is the little bed on the bed, in which all the animals like to sleep when they can. This was set aside while the bed was dismantled, and wasn’t available to them. So they slept on or against me a lot more than previously during this stage. And since I managed, one fine day, to get the bed made again, at least Piper has still slept on or against me more than previously, which is delightful.

This one may be gross if you don’t like bugs. For a while I was playing a “drinking game” with Junior Mints while I watched horror movies and looked for cliches. (I started eating sugar again earlier this year, because I figured that if I was going to do chemo for months and months, I might as well eat whatever I wanted. Now I’ve gained so much weight that I don’t fit into half my clothing, so I’m tapering that off again, which is why I said I was playing this game.)

Anyway, one box melted a lot, and I only managed to eat half of the meltiness before it became too much work and I just threw away the rest. But before I did, I took a picture of the interior of the box– 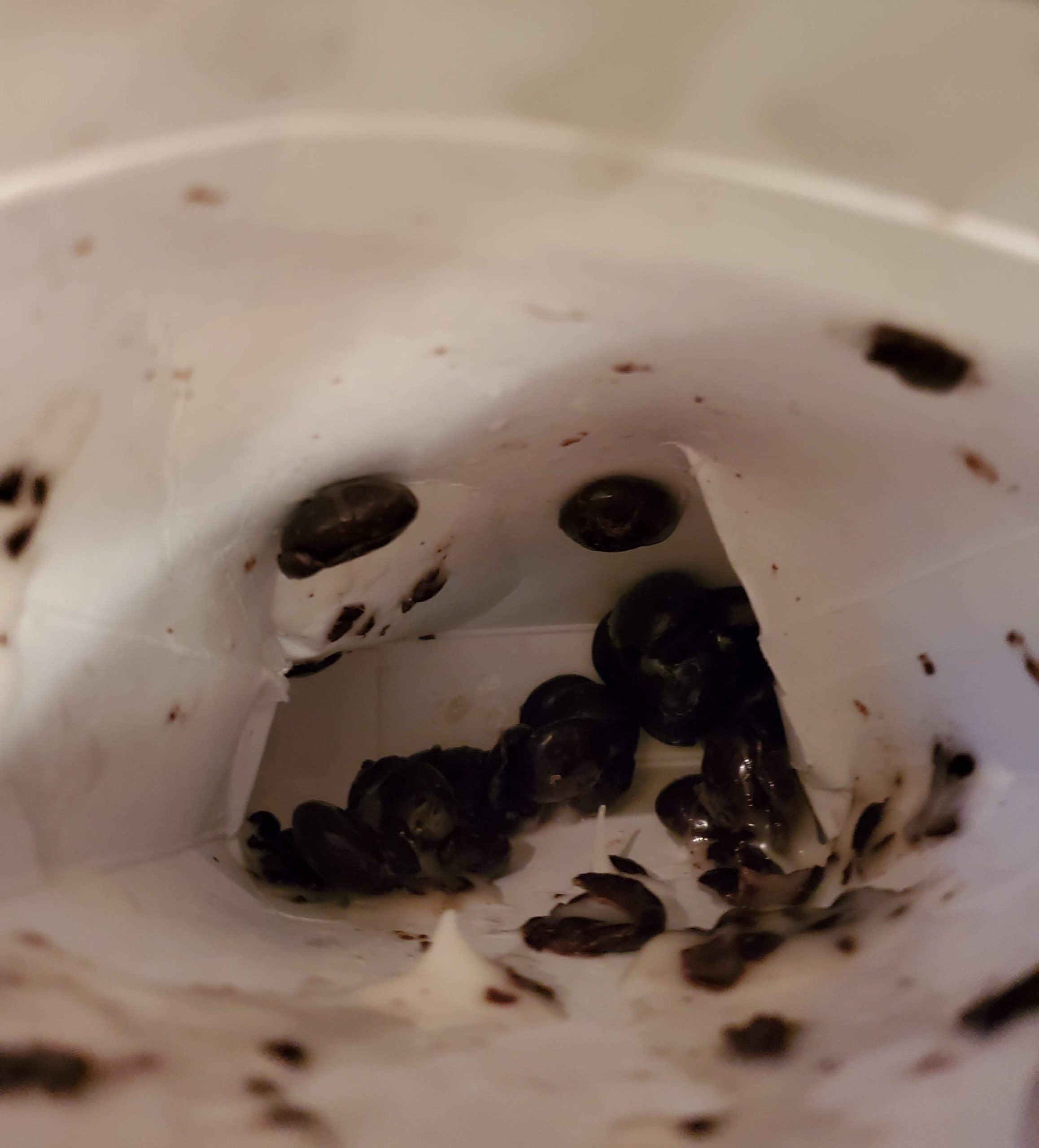 –because it looked so much like either a collection of ticks inside an animal’s ear canal or a cave (like in a video game) full of bug eggs. I just had to have a record of it, because to me it was very striking.