It’s been a month, and I’ve barely taken any photos during that time. I may need to rethink this entire posting format for photos in my new life. But it’s nice to be caught up and making this post in a timely fashion.

Since I replaced two of my G1 Echo Dots, they were sitting on top of my lil fridge in a pile of junk. On this day I was finally going through that pile and tidying up, and I came upon thems.

It breaks my heart to throw away things that still work, especially if they have super cute skins on. I thought maybe if I documented these in photos, it might be easier to let them go. So I took this picture: 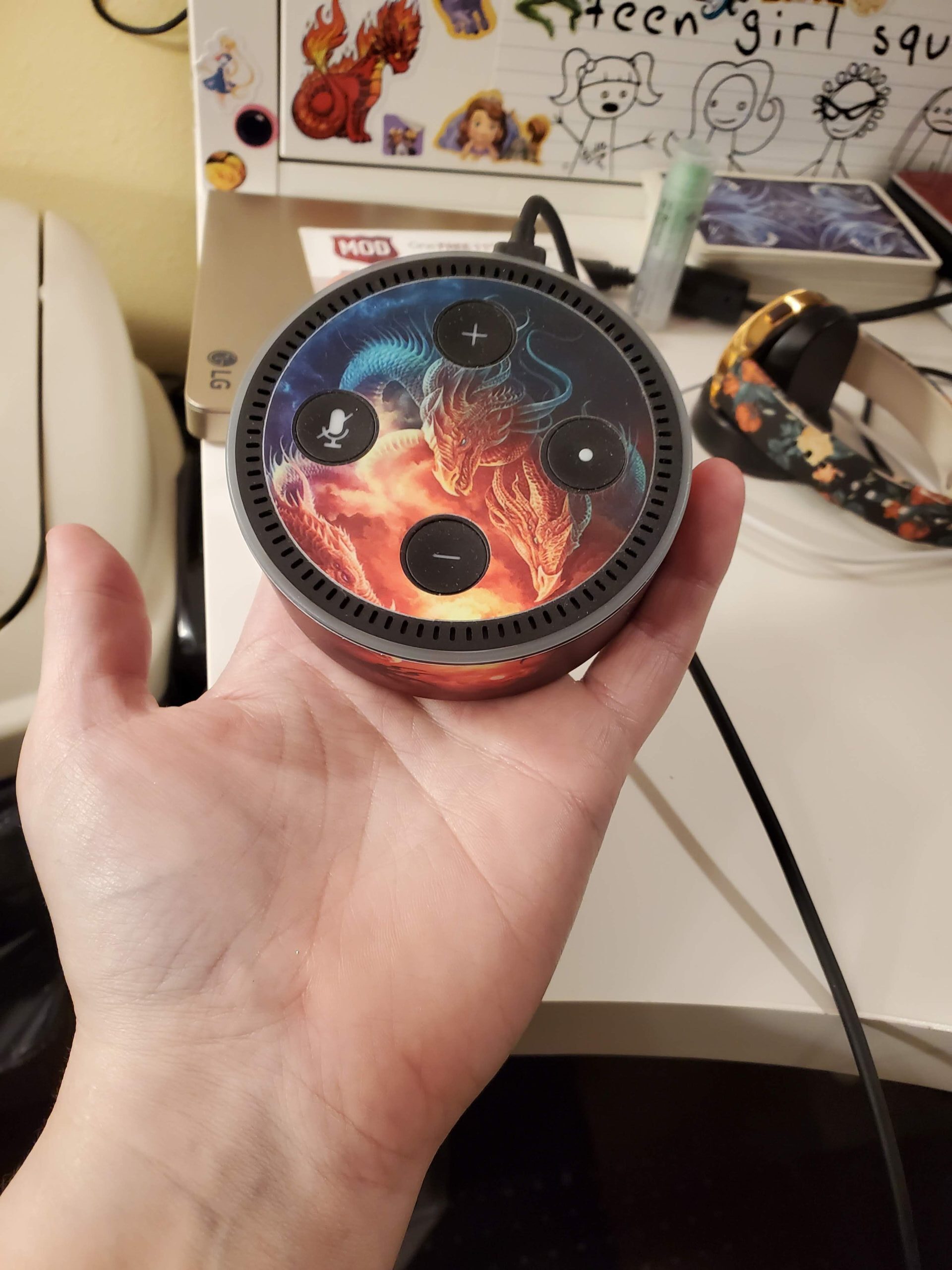 But then I was like, Why not put them both in the rec room? There aren’t any Echo devices in there!! So I didn’t take a picture of the second one. I have in the past, so it’s no loss.

Brother texted me this–

–and I couldn’t stop laughing. 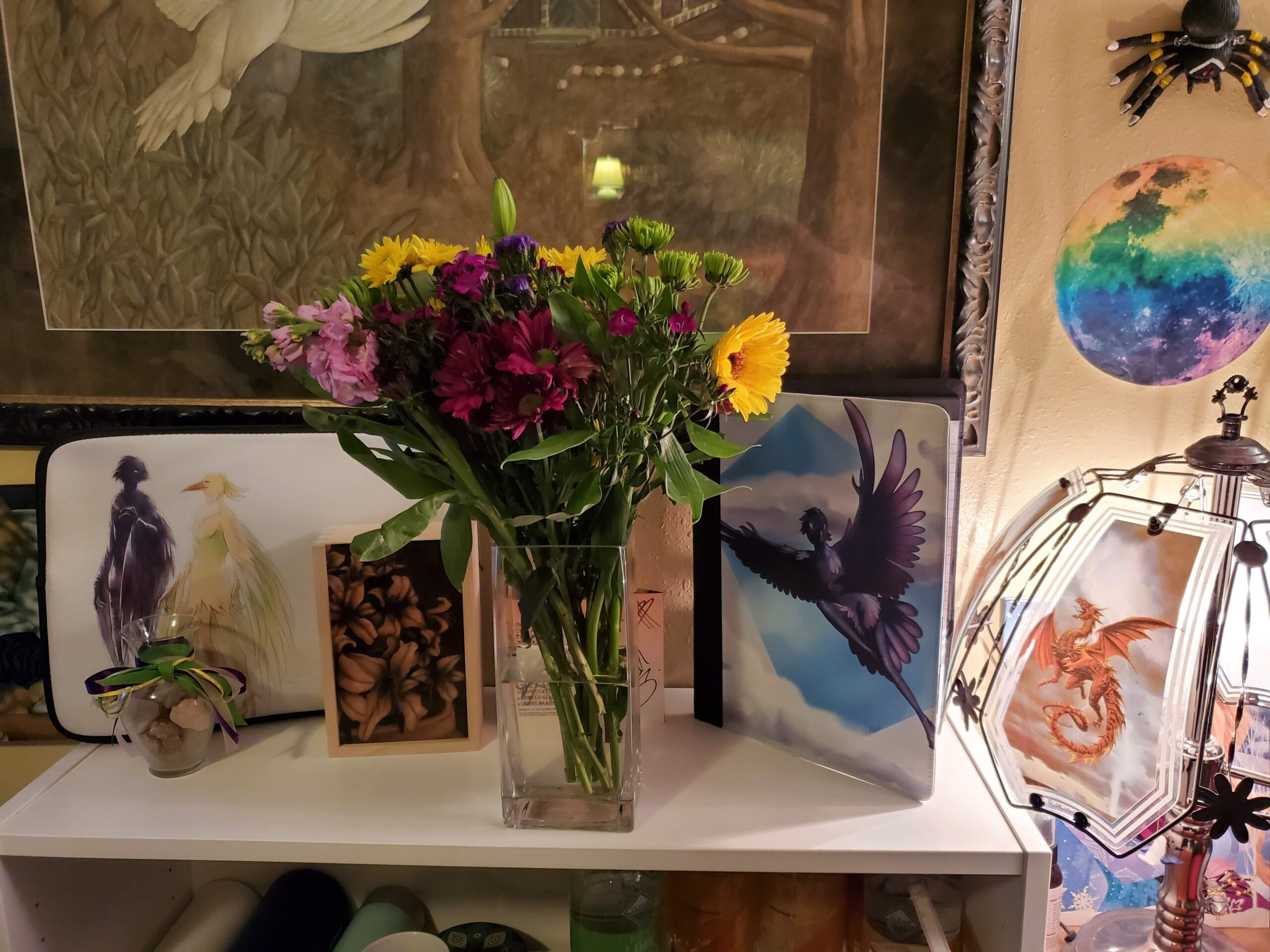 Aren’t they so cute?? You can also see how I tidied up the top of the white shelves ^__^

This was the day of the bad news. On the way home from it, dad and I picked up the grocery order at Wal-Mart. There were some geese.

At home later, when brother got up, I dragged him outside for a private talk, cried piteously at him, and begged him to get a covid vaccine. I explained all my thoughts and feelings on the matter, most of which either I’ve probably already noted here or can be guessed (including the new perspective I gained that day).

He said that if it were a matter of his own health, he would have been long since vaccinated; but that he wanted to stand up for/show solidarity with people that were afraid to get the vaccine and were being pressured to do so.

He also said he would consider what I had said to him.

That evening, I was feeling a little despondent (if you can believe it XD), so I curled up in my cancer blanket and hugged a stuffed animal while mom and I (and brother across the room) watched Raya and the Last Dragon. That was an OK movie. 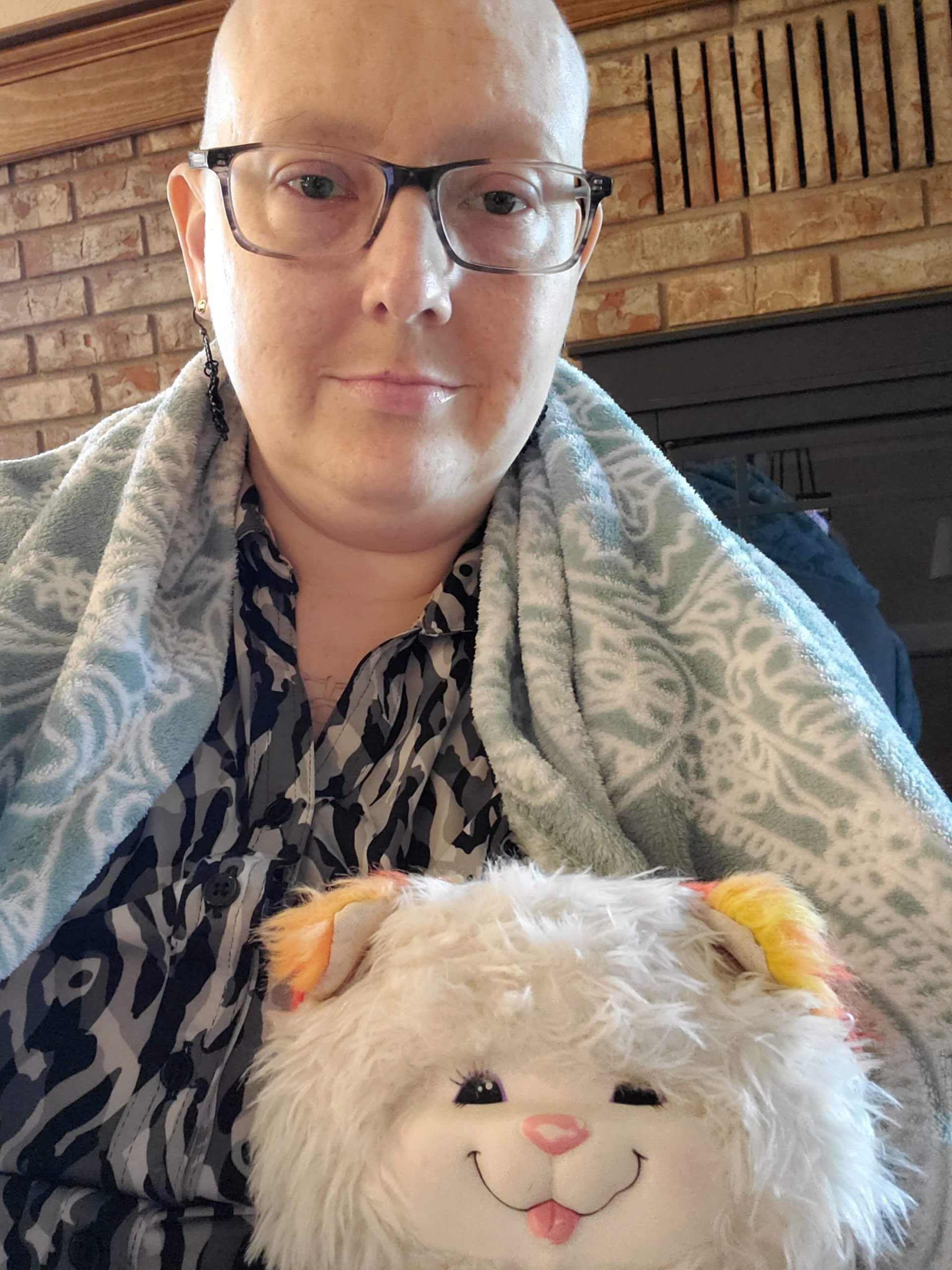 Usually, Piper brings her ball and puts it on the floor just out of arm’s reach. But this time, she brought it in and peeked over the top of the fridge to see what I was up to. It was scramble-for-camera adorable. 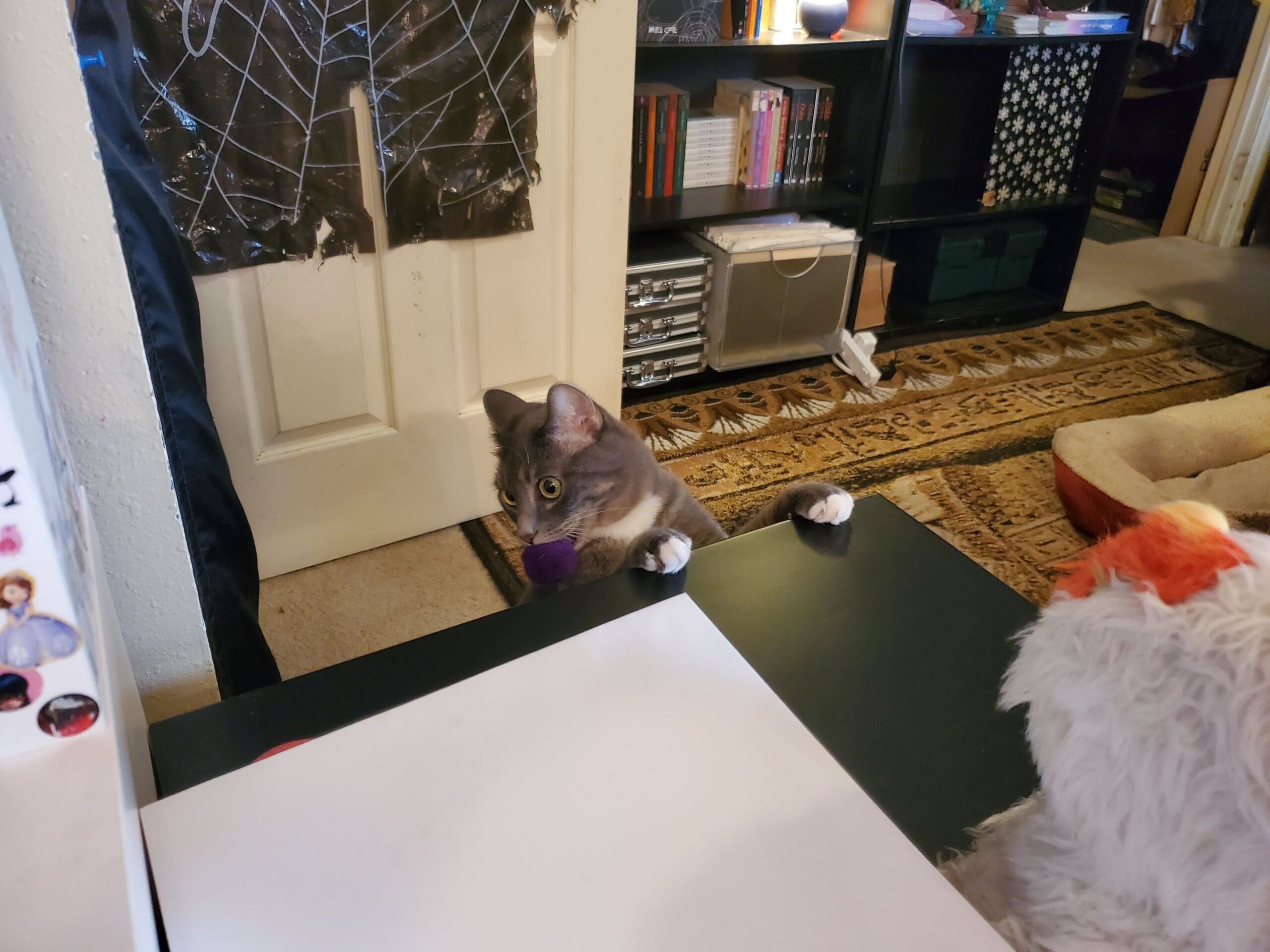 I totally forgot about the DC Pride Anthology until this point. Then, of course, I got it and read it. And here’s a screenshot: 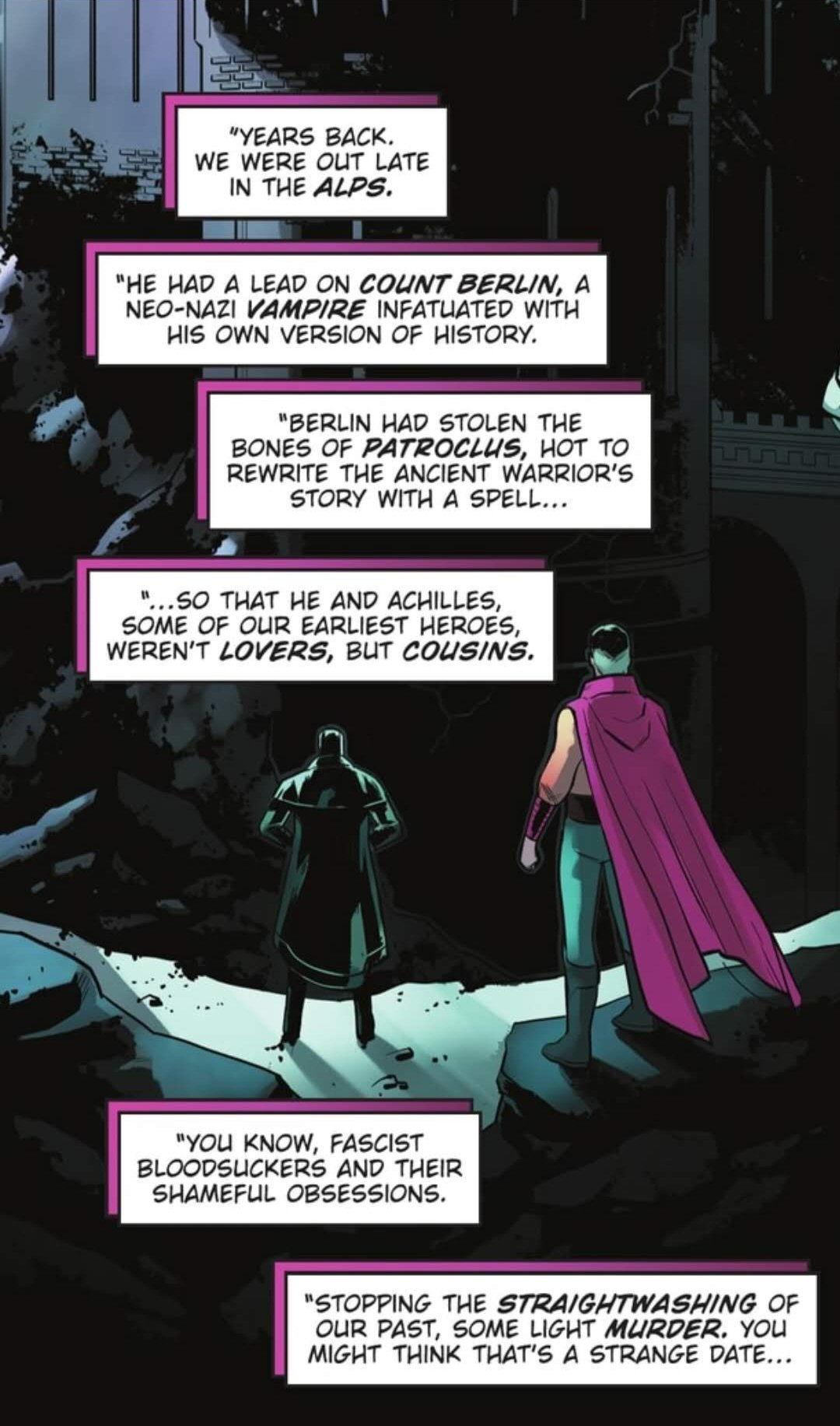 It’s not remarkable because it’s about gay superheroes on a “date,” because that’s a given in this context. It’s about… all the combined elements together. Neo-Nazis, vampires, our real-life heroes Achilles and Patroclus and their findable bones… COUSINS???????? It’s the most fabulous page from a comic book that has ever been written, probably.

That same day (probably while I was reading comic books), Piper and Suki got into nearly identical positions by my feet: 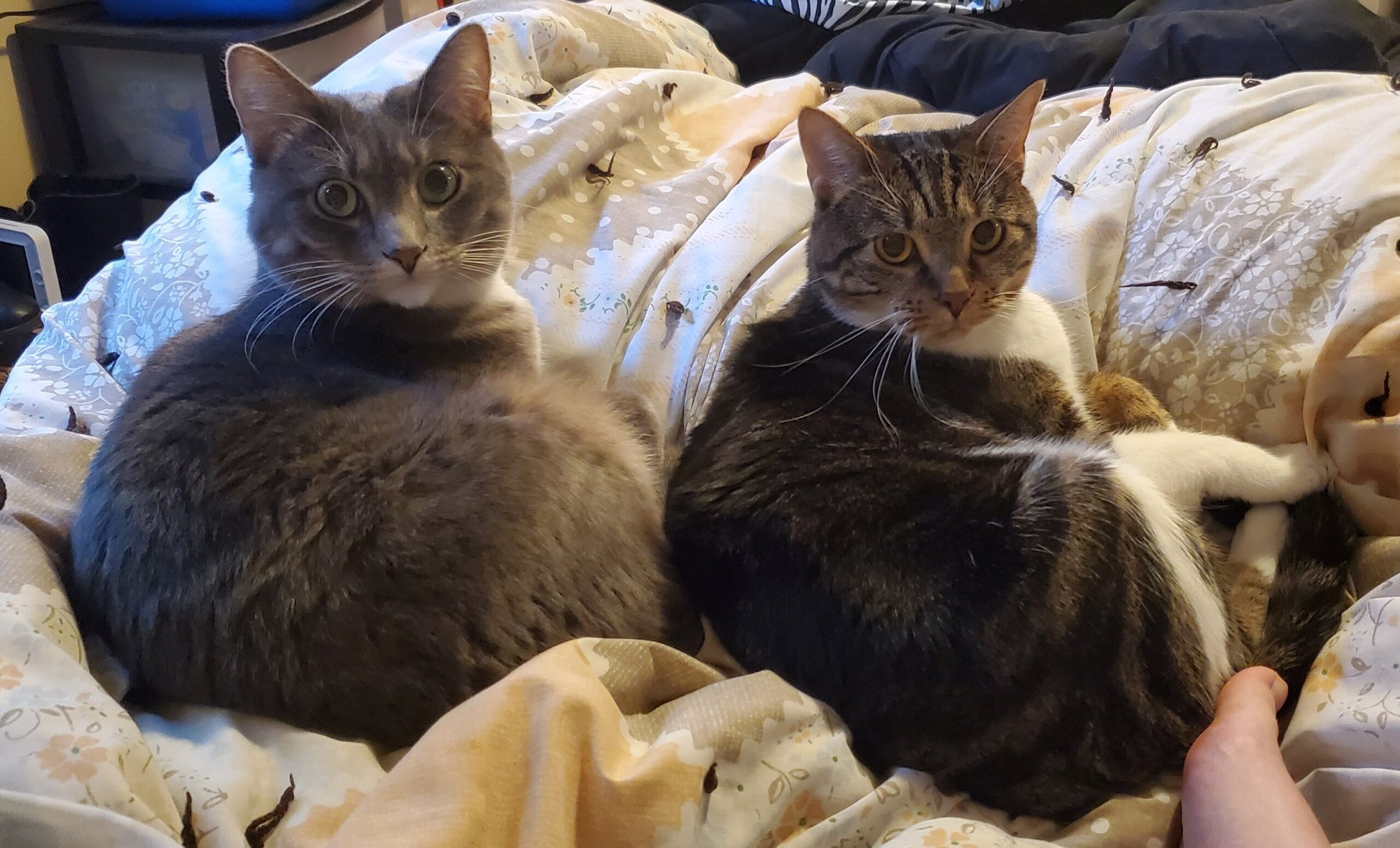 Just, how cute are they.

I did a lot of tidying and cleaning at around this time as I was recovering from chemo. And one of the biggest things I managed was to get all the junk cleared off my draft table and the glass washed so I could put it up at a high angle and set up a large drawing on it again.

After I removed from it the drawing board that had been sitting flat on top of it for one hundred years, I very naturally came upon what I’d left taped to the draft table that same length of time ago: those limited-palette pictures I was doing way back then. I didn’t remember them very clearly, but I thought I recalled them not being worth much thought. 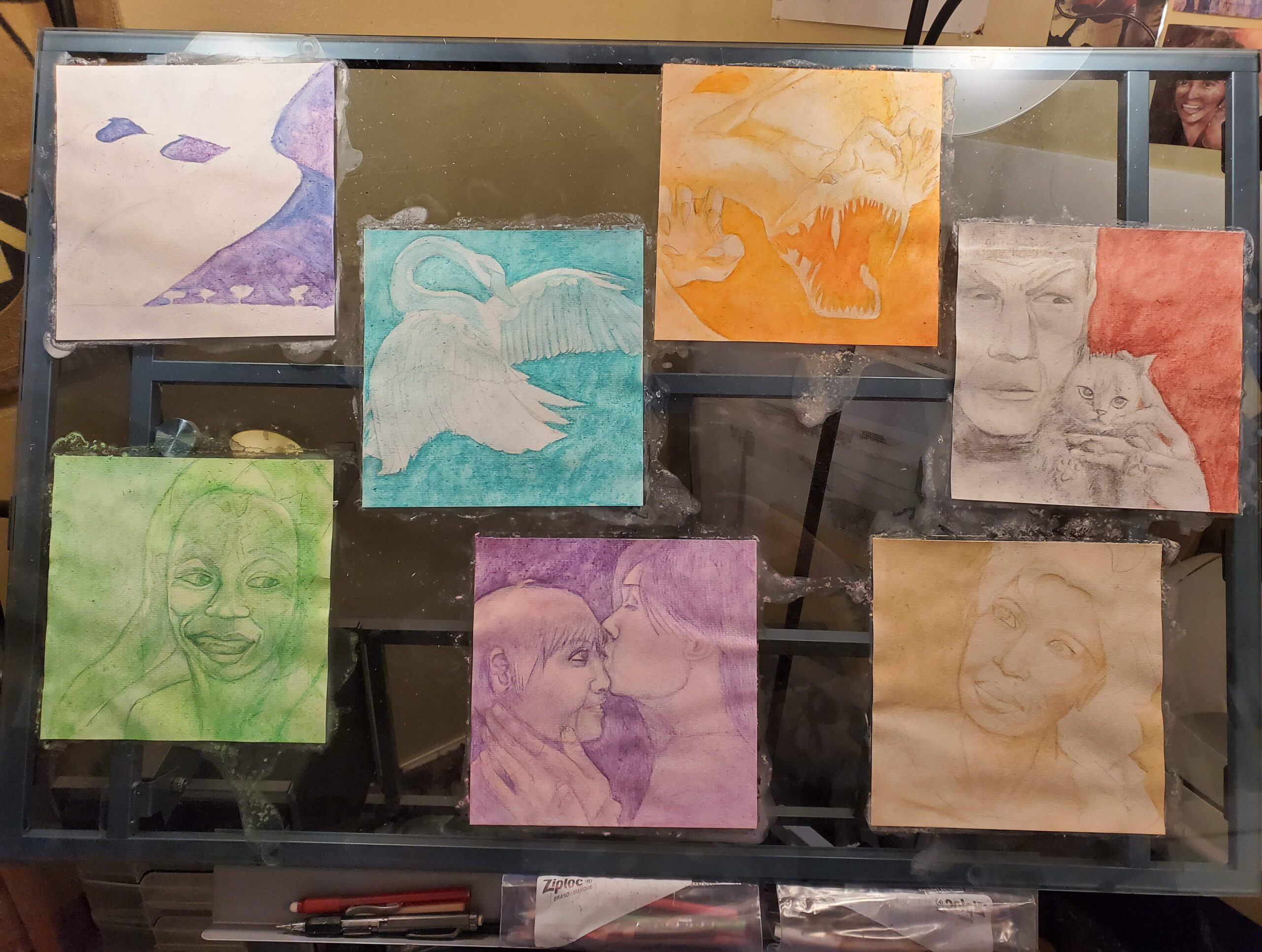 But then it turns out they’re not all that bad. Not good enough for me to bother doing any more work on thems, but not bad. I’ll give ’em a scan one of these days. For now, it’s just that picture there that’s the same as all the progress shots I took of them back in the day XD 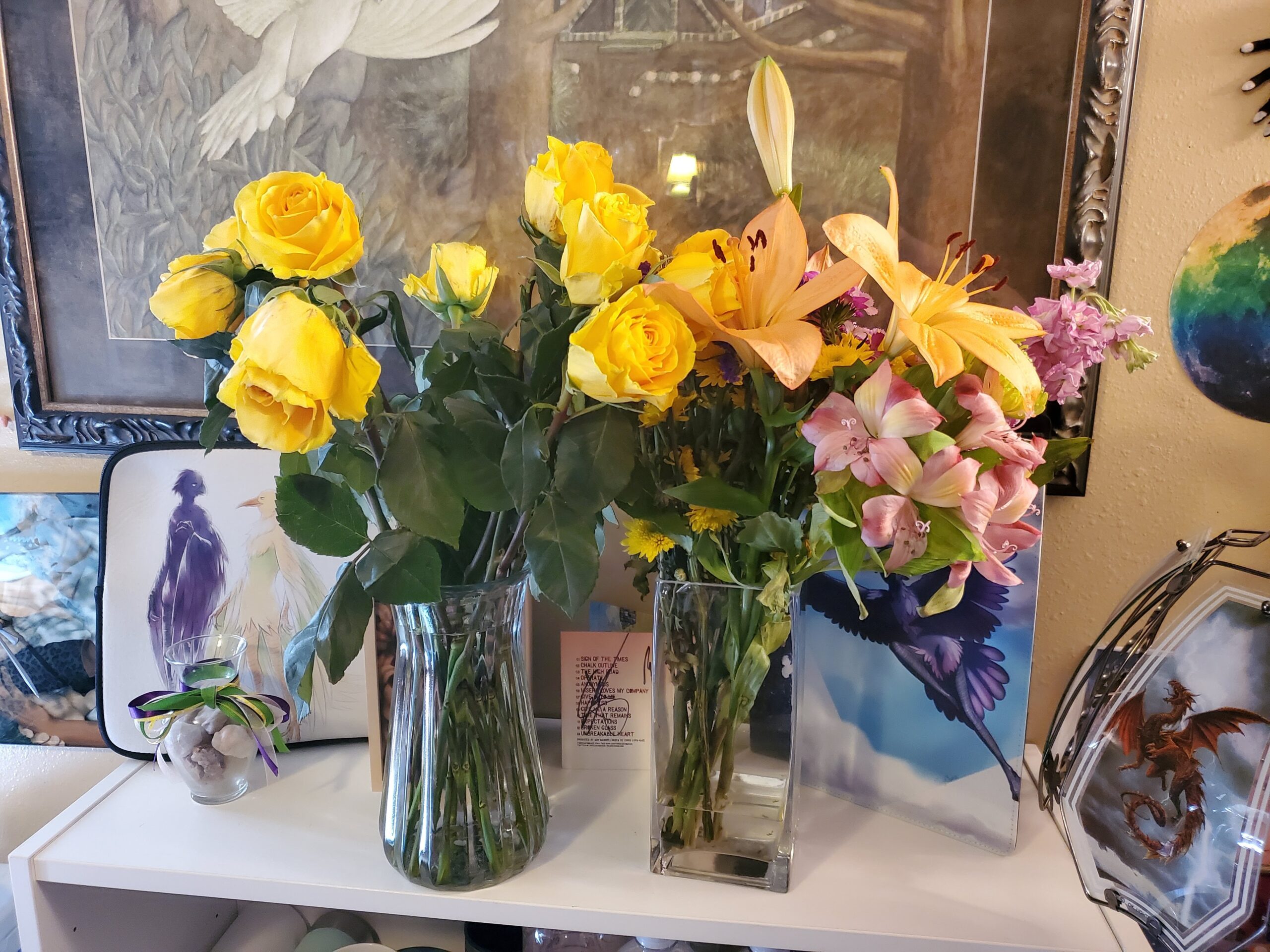 They’re purty and smell nice. But they were already drooping within hours of receiving them XD

On the 31st, I had a minor surgery removing my IP port. Afterward, I took a long nap with my animals. When I awoke at one point, I found a SUPER ADORABLE LITTLE CUTE TINY CUTE SPIDERLING inside an upside-down glass on my desk. I didn’t take a picture of it, because I was pretty groggy; I just turned the cup over so it could run free, after squeeing over it a bit. A lot.

Afterward I found out that it was a present from my parents!!!!!! Mom was painting at that time, and almost painted the spiderling, so she had dad catch it and bring it down to me!! I can’t even express how sweet and adorable such a gift was! I’m not over it still. I know, I know, there’s no photo for this part. This entry contains a lot of rambling about not-photos.

My birfday! Here I am looking cute: 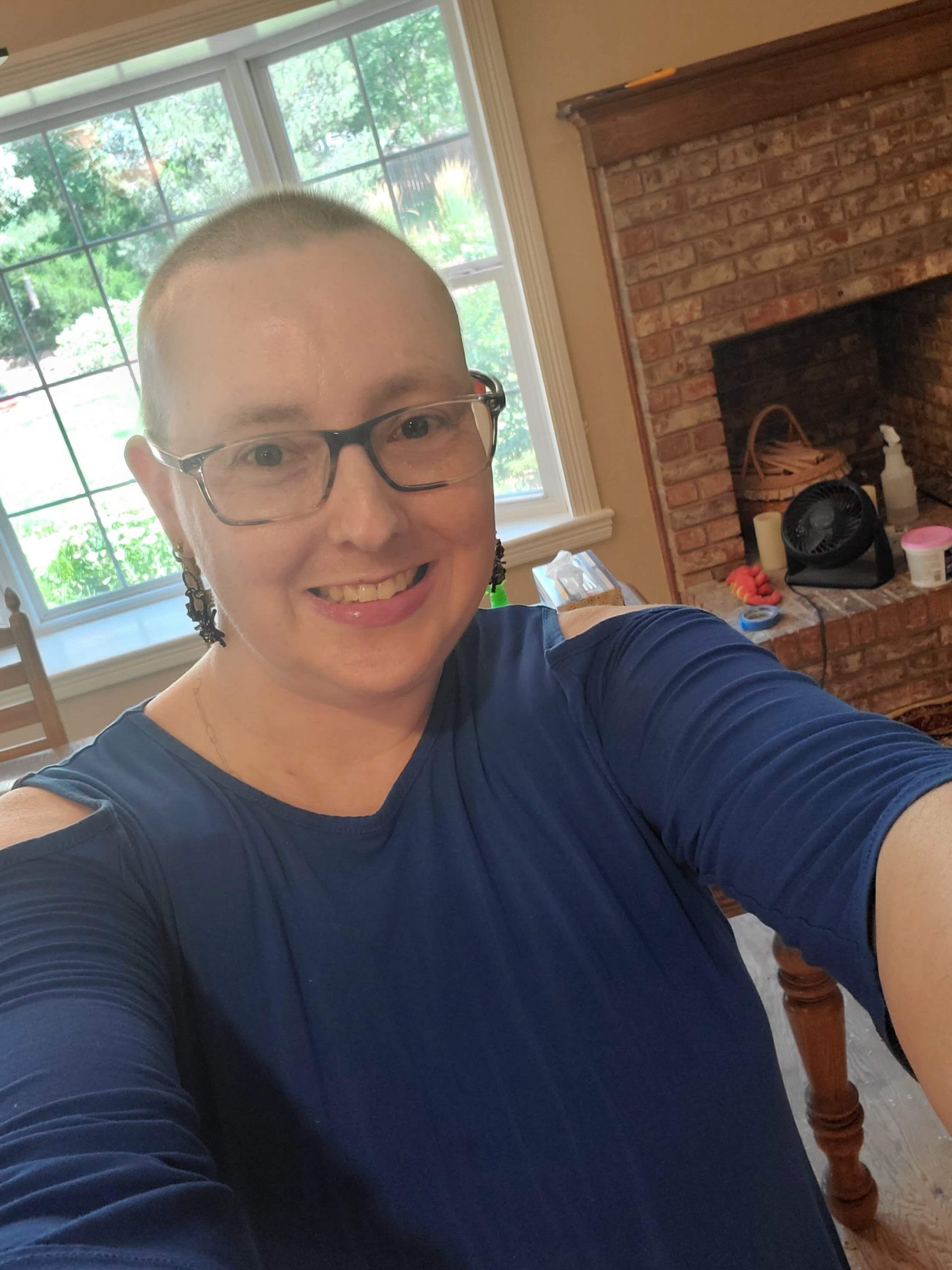 My hair’s growing back, as you can see, and it looks like it’s gonna be brown again. I had hoped for all grey, but you can’t always get what you want. And I can’t be entirely sure just yet. I want to let it grow long enough to be sure what color(s) it’ll be, and then, if it’s nothing interesting, I’ll shave it again. I haven’t had a close shave for many years, and I like the way it looks.

Sister P and her kids sent me three scarves for my birthday. Today I wear the one with little birds on it: 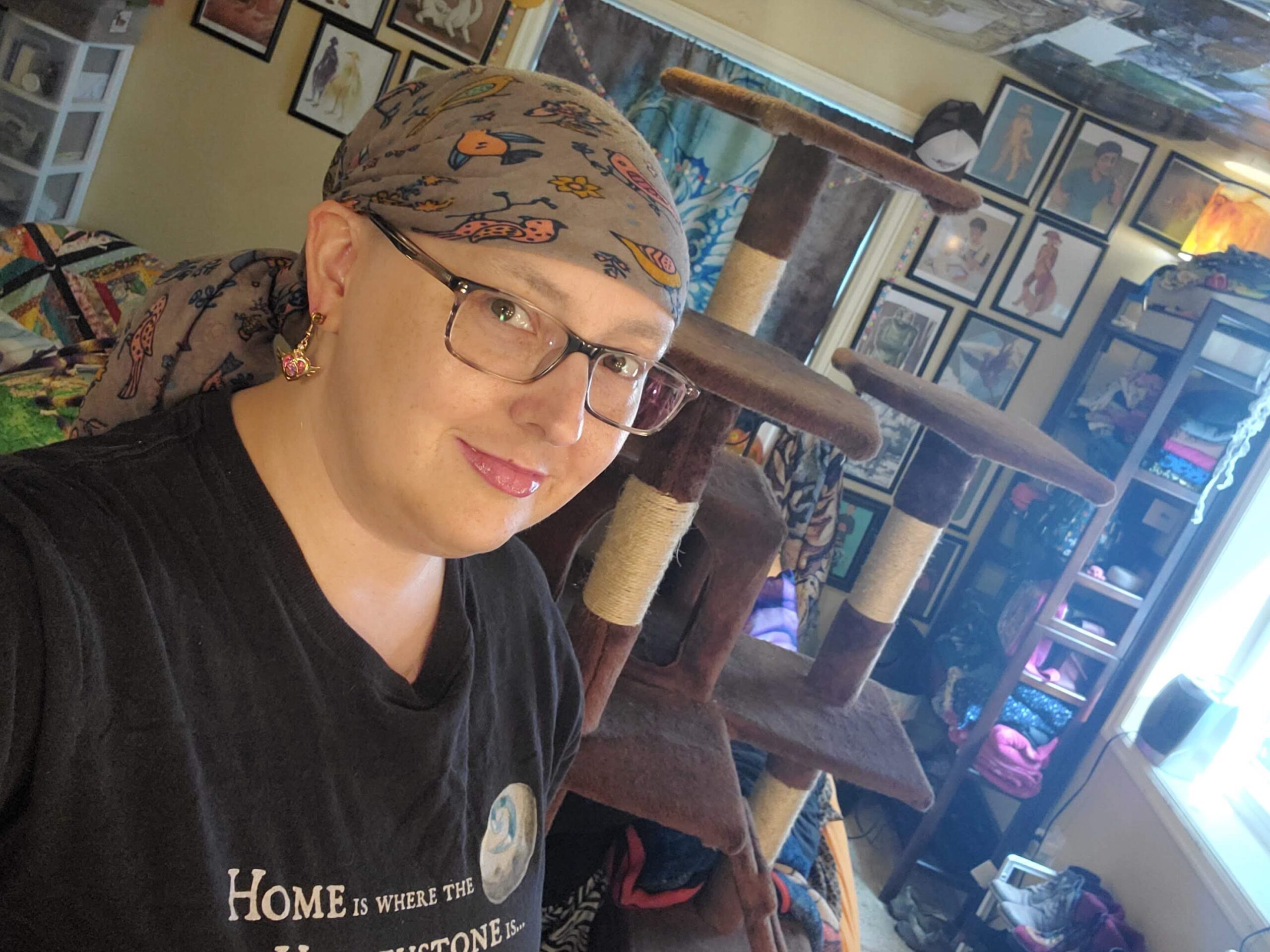 Though I’ve actually put it around my neck since then. It was irritating my forehead some. And you see the BSSM earring in that picture? Here’s the other one: 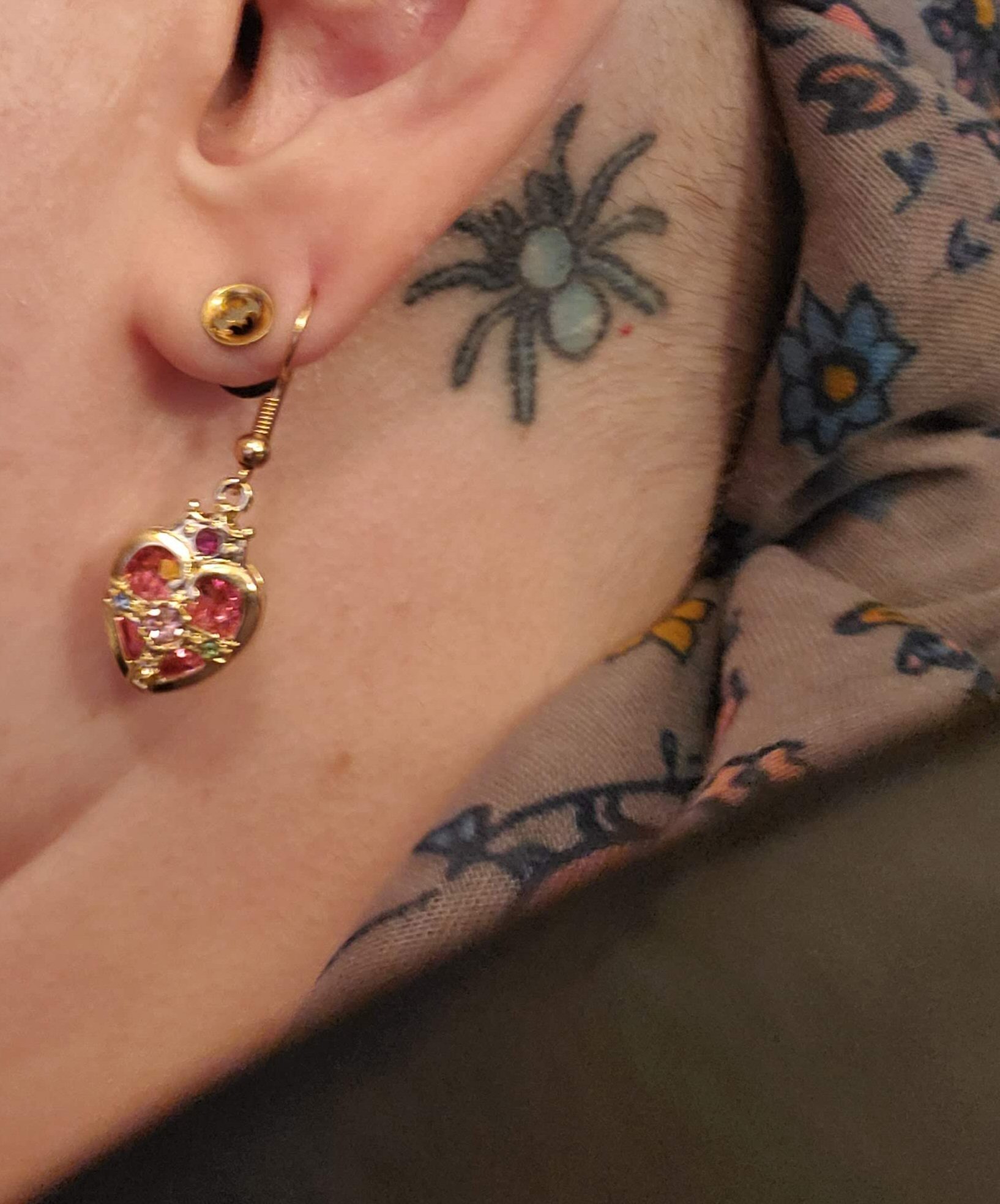 Those were a present from sister M when she visited last week. She bought two pairs of BSSM earrings and gave me half of each ^__^

Those are nice things. My birthday was not entirely nice, for one because the new drug I’m taking in the hopes of not dying seems to have granted me the side effect of fatigue. That’s supposed to be temporary, so cross your fingers for me.

Additionally, someone else granted me the gift of an emotional roller coaster. I honestly don’t feel like talking about it, but it’s one of those things I’m going to want to have a record of later, so here goes.

Brother in his turn dragged me outside for a private conversation. He told me that he too misses hanging out. He said he thinks not getting the vaccine is a moral imperative. To reconcile the two, he was for a while actively trying to contract covid in order to get a natural immunity so we could hang out again, and had gone so far as to place an ad on craigslist toward this end.

Just like the last time, I didn’t have the energy to hold some kind of debate about what he thought or what he did. When he asked me for my updated thoughts, I told him everything was the same as the last time we talked, but that he should have waited until after my birthday to bring this up.

We were just about to sit down to birthday lunch of turkey burgers and dessert of apple cake. It was the finest repast. But anyway, at that point brother left. He came back afterwhile with a Halloween card with a spider on and Amazon gift cards within, and confessed it was a last-minute, not-thought-out present.

A bit later, I had to run downstairs, and brother followed. He handed me this awesome card– 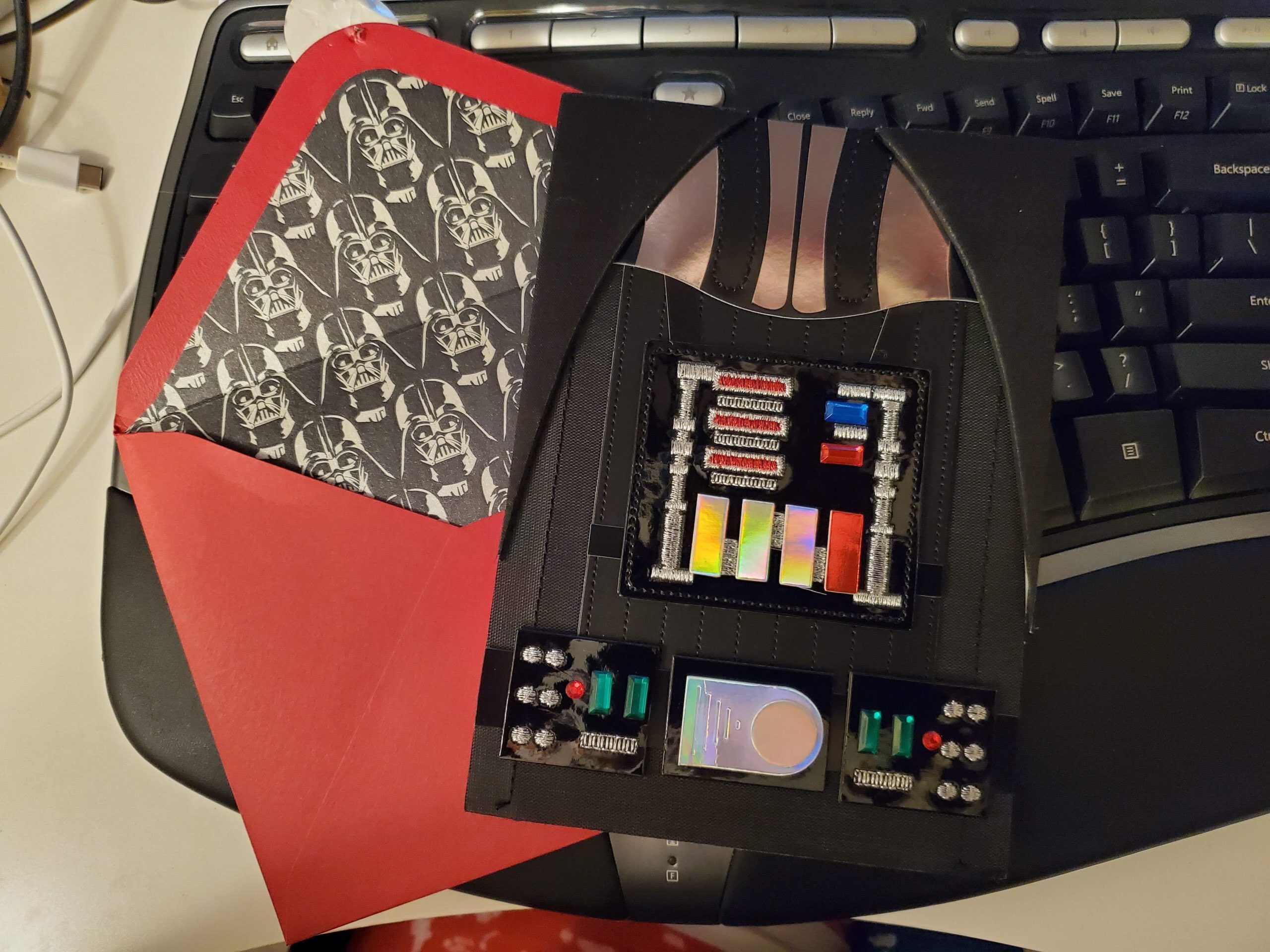 –which is actually a birthday card, not a Halloween card with “Halloween” scratched out and “Batday, Birthman” written in XD (Reference)

And what should lie inside this birthday card but a FUCKING VACCINE CARD?? I think he went out just then to get cards and vaccinated at the same place. I don’t have any idea what he was thinking. I’m overjoyed (to the point of crying like an idiot) that he has his first round now, but just… all the emotions… I don’t understand him, and at this point in my life I’m kinda too tired to try.

Today I have been tired and groggy again. I sure hope that side effect of the new medication means it’s working. I haven’t been feeling up to doing much real stuff; in fact I’ve been watching BtAS all day and working very leisurely on this entry. I’m still happy to be posting it on the day I’m supposed to!

It’s got more tags than photos, though XD