My sister and her kids sent me scarves for my birthday. They arrived a little late, and not all together, but it was a great birthday present.

According to sister, Lyric wanted to get me something Sailor-Moon-related, but they couldn’t find anything. This blue one with stars and moons was all they could come up with: 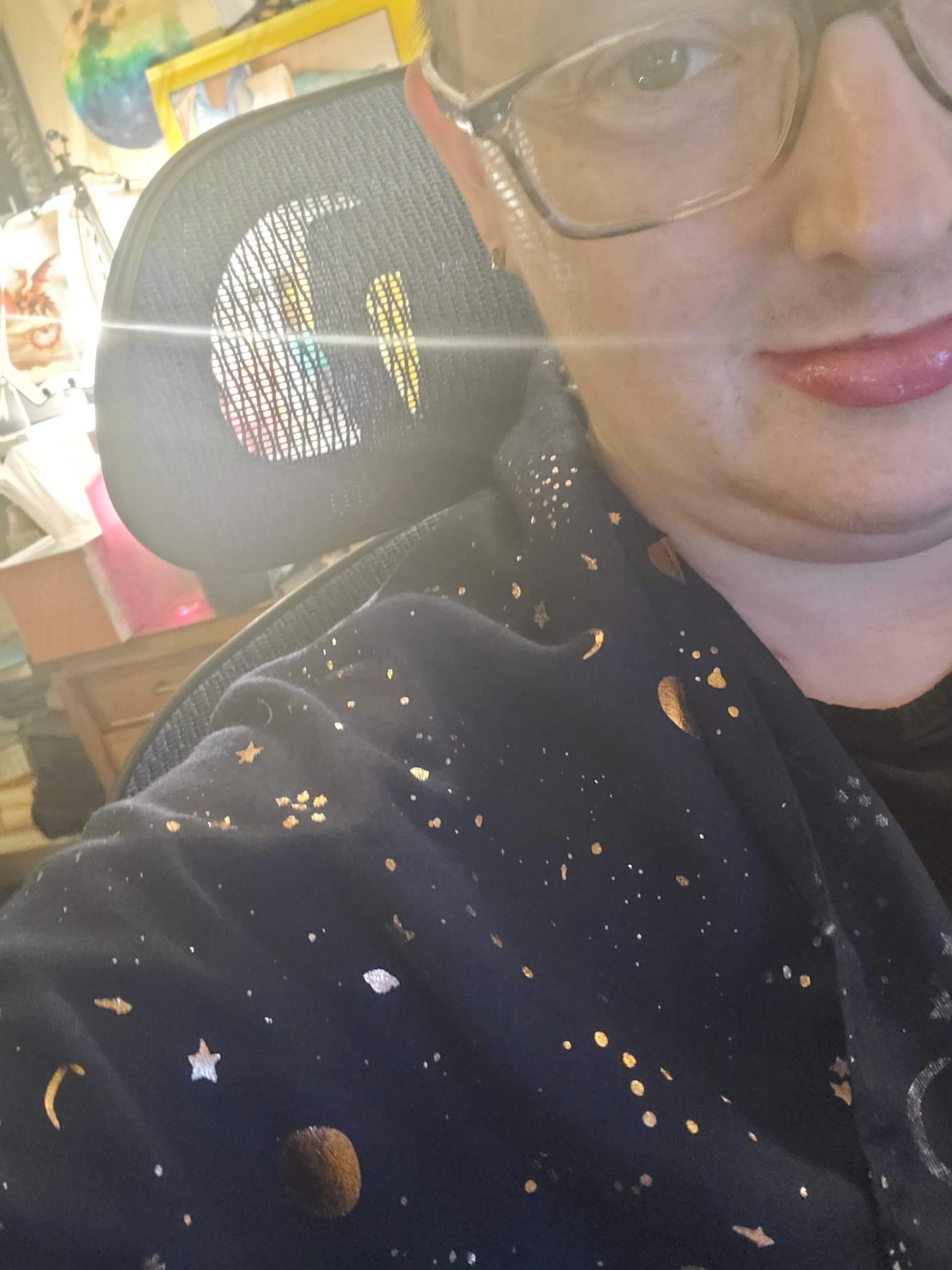 It’s become my favorite scarf, and I wear it all the time now. 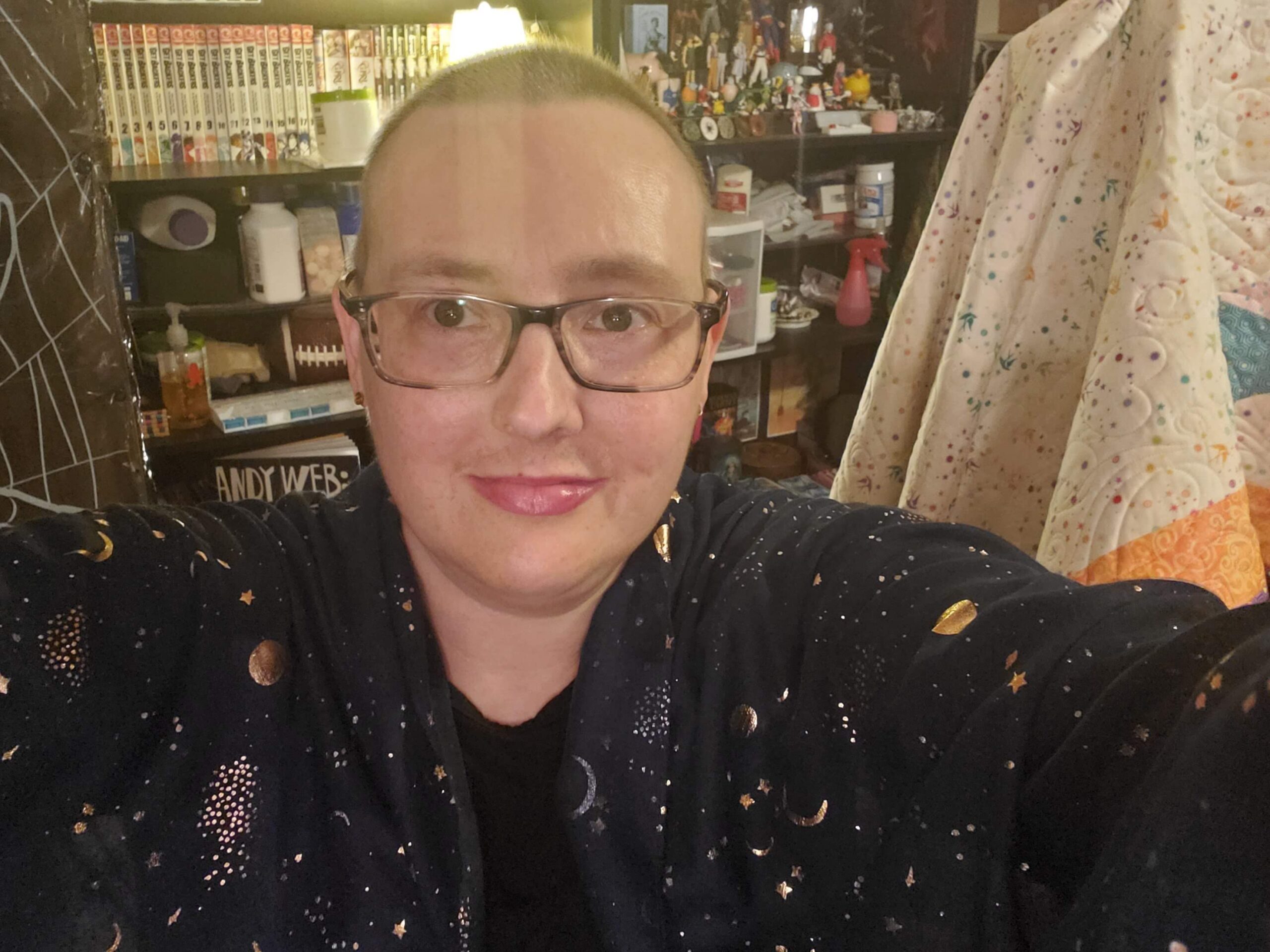 Another one is kinda dark teal with FOXES ON. 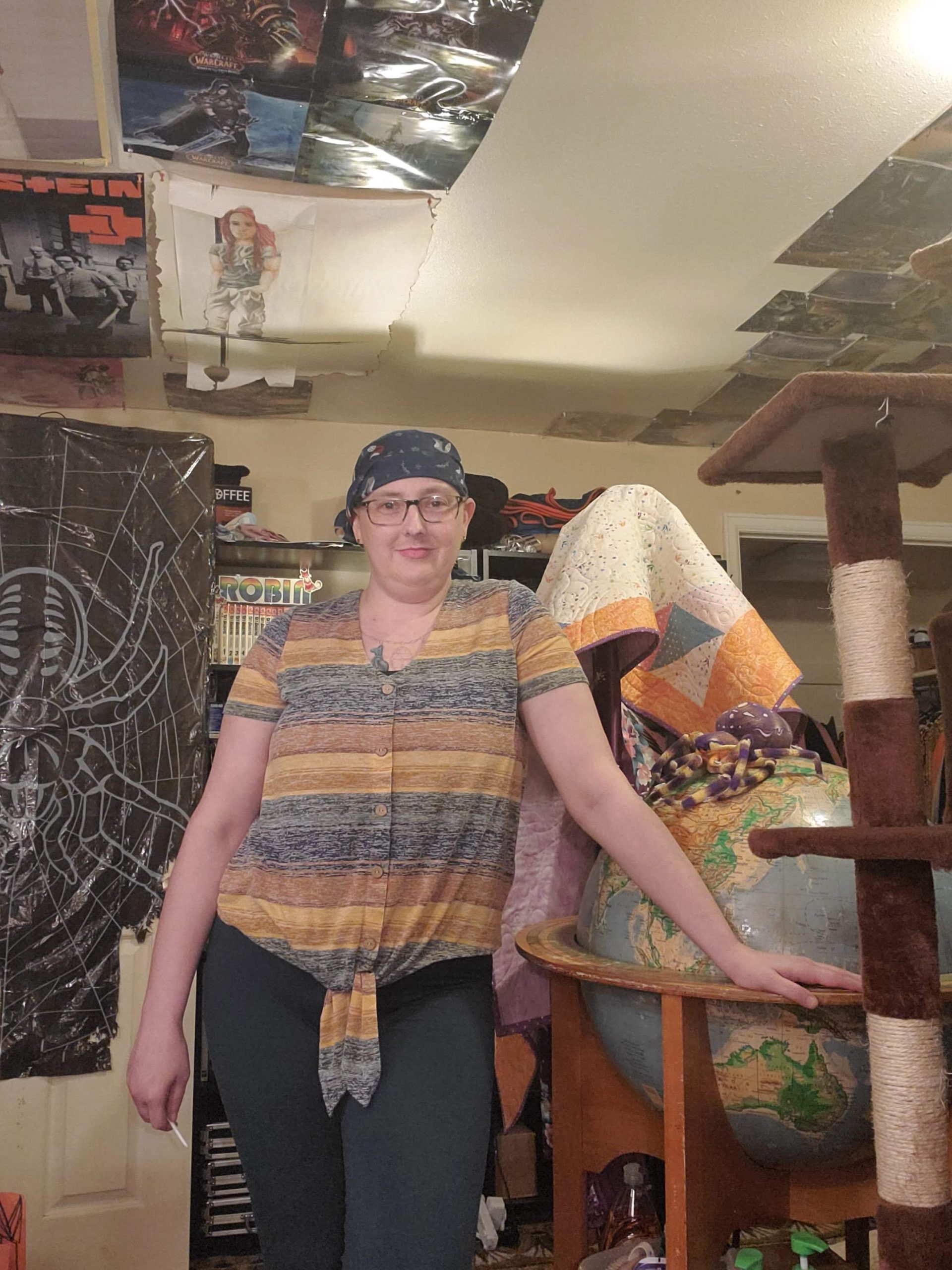 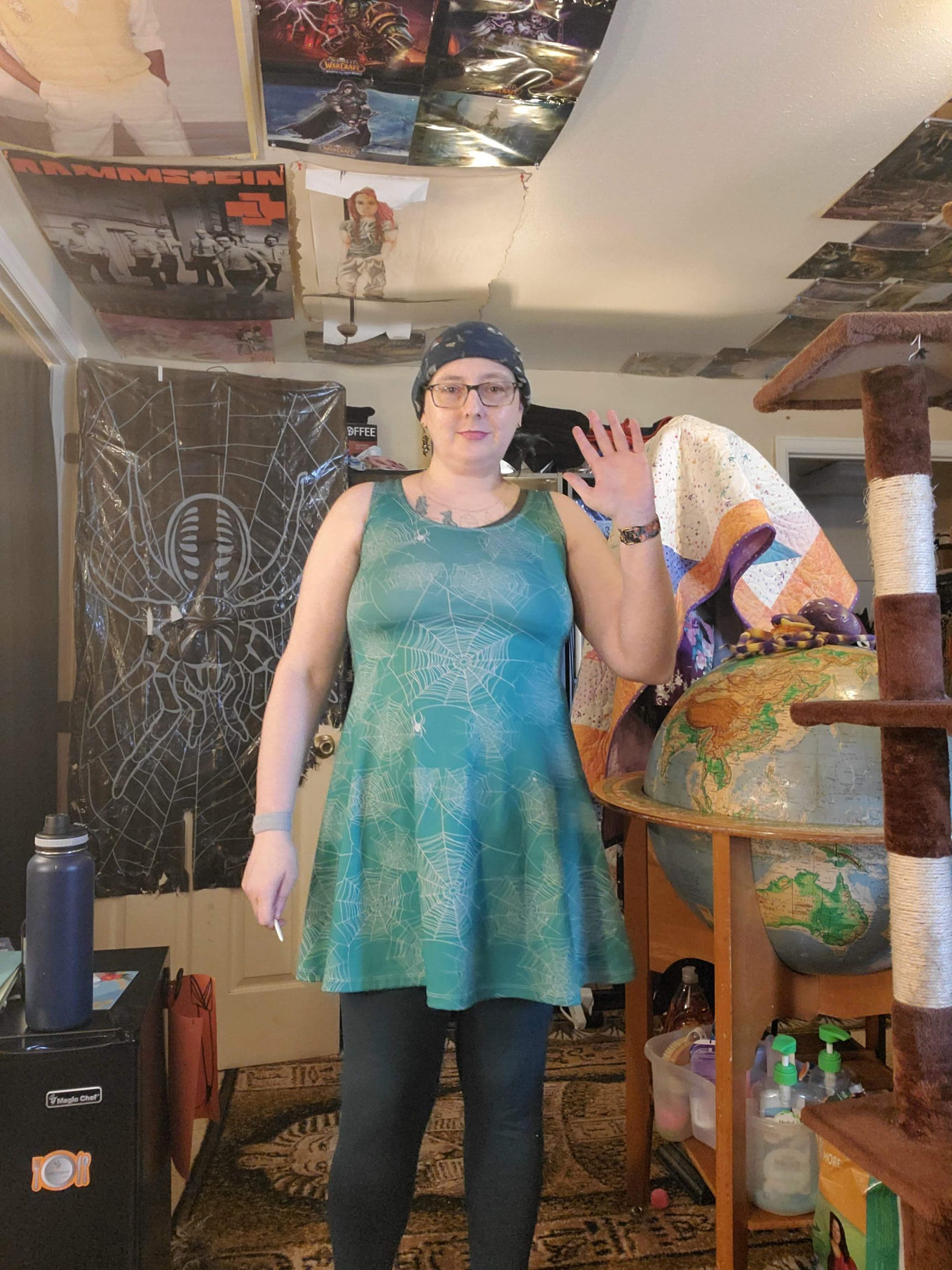 Hiko got a groomin’ that day, and they sent him back WEARING A LITTLE TIE. 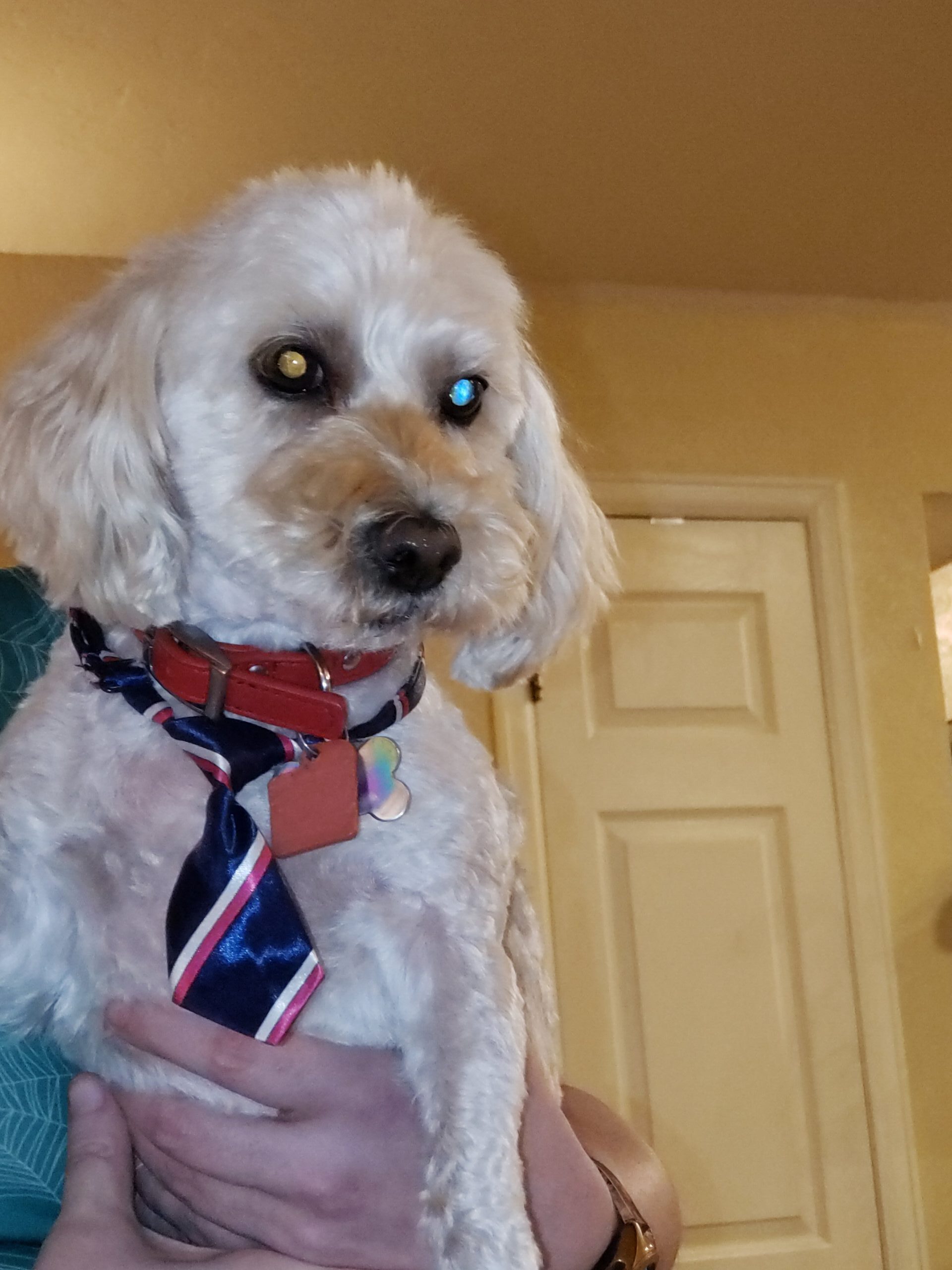 Mom took that picture. I so rarely use flash that if it’s there in a photo, you can almost guarantee I didn’t take it XD

Mom also took this picture of Galileo with BYU’s victory over the Yewts in the background: 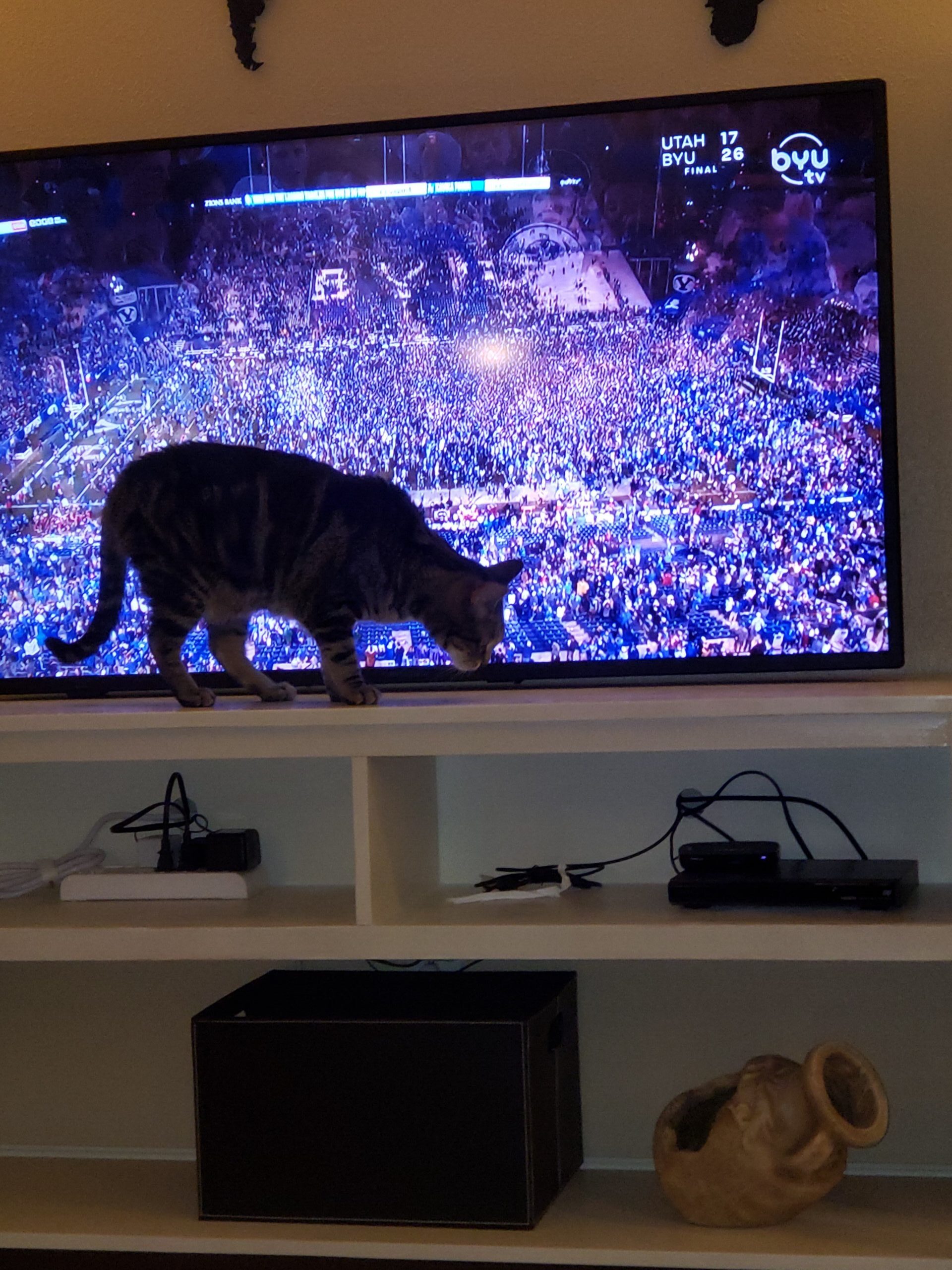 All right, lotta talk here. It obviously spoils the joke to explain it, but I need this documented for posterity.

Once upon a time, in She-Ra: Princess of Power, there was this ridiculous scene where She-Ra was fighting Hunga the harpy, and at one point she said “Sword to blanket!” and absurdly transformed her weapon into a non-weapon that she then used to cover Hunga’s head.

In the special features on the DVD boxed sets, there was one interview with a writer of the series who explained that everything he’d written for that scene got kicked back for being “too violent.” He put in “Sword to blanket” as a kind of joke, and the censors accepted that. He apologized, like, twenty-five years later, for “Sword to blanket.” It was pretty hilarious.

Next point. You remember my nephew’s other grandma (named Jackie) buying him weapons that she wouldn’t allow in her house but was perfectly happy to send to our house? Yeah, keep that in mind, and read the following text exchange between me and my mother: 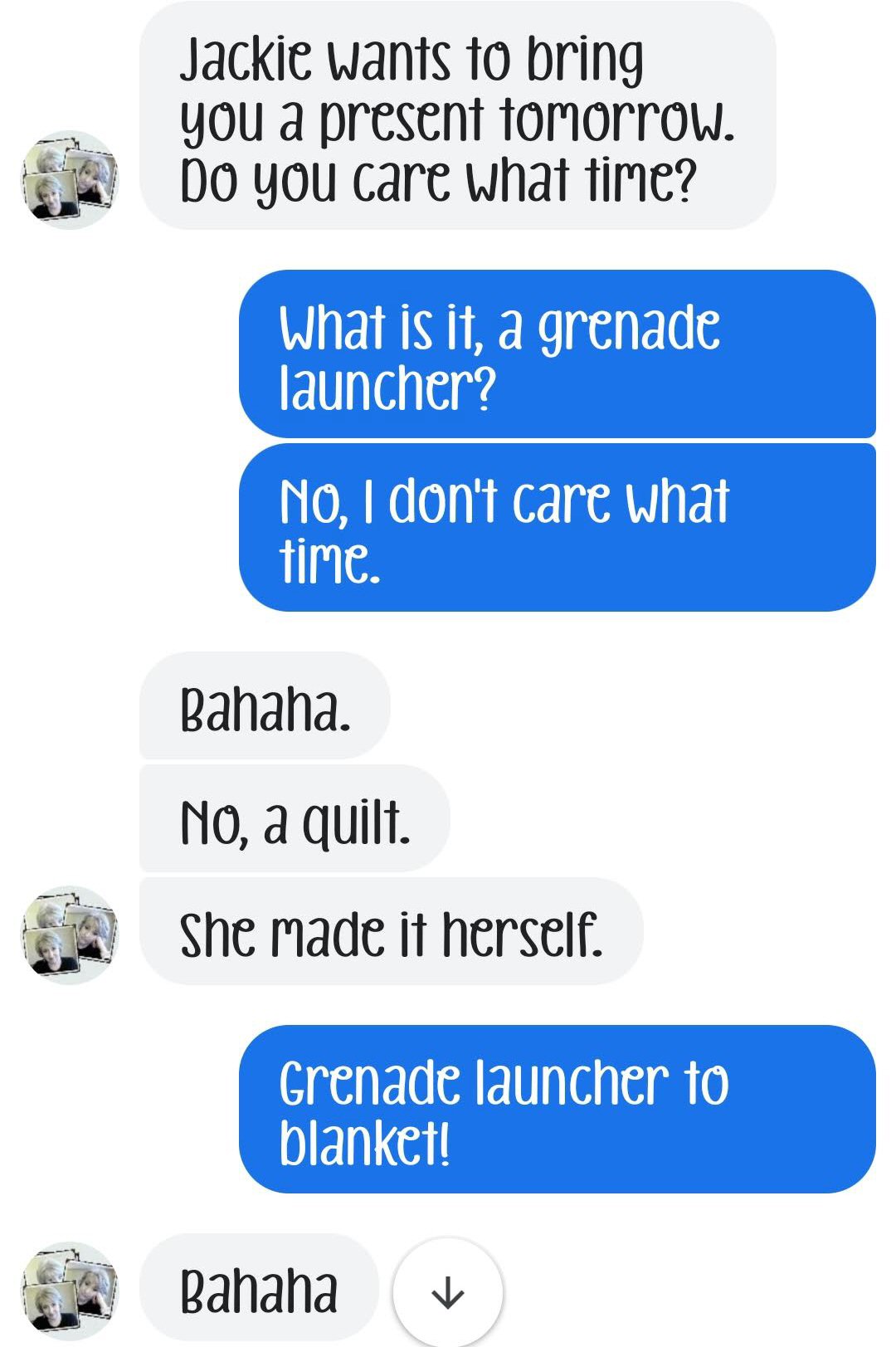 I consider this maybe my best joke evar. (Wow, a She-Ra desktop wallpaper just popped up on my second monitor as I was writing this!)

Anyway. Jackie’s a bit of a flake and put off bringing the quilt for several days after she said she’d be here. But it was so incredibly sweet of her to make the thing for me in the first place! I’m her daughter-in-law’s sister, for goodness’ sake! And, though I wish people would stop giving me blankets, because I’m up to my ears in them, this one is so freaking cute, and the thought was so kind, that I count it as one of the best gifts I’ve ever received. 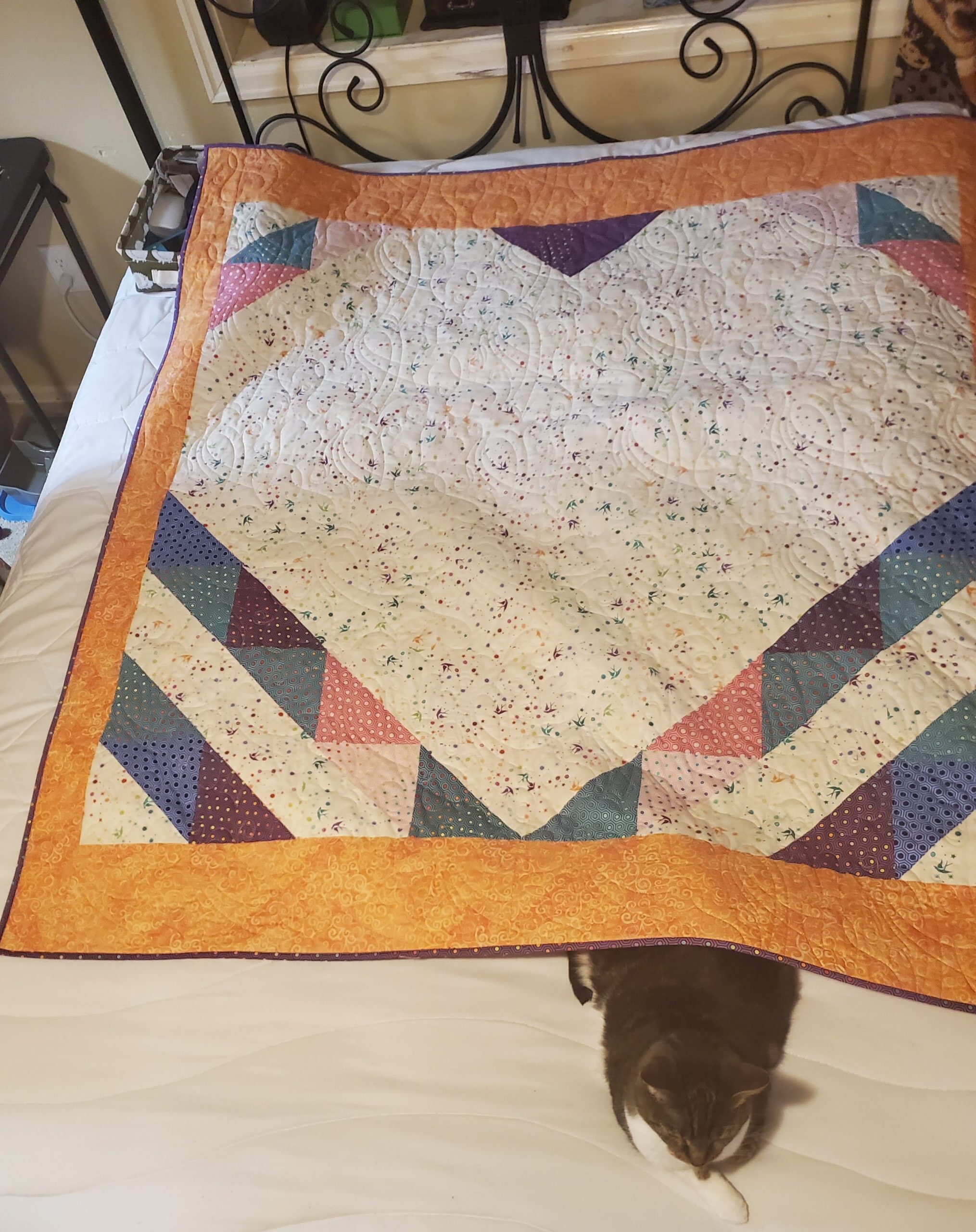 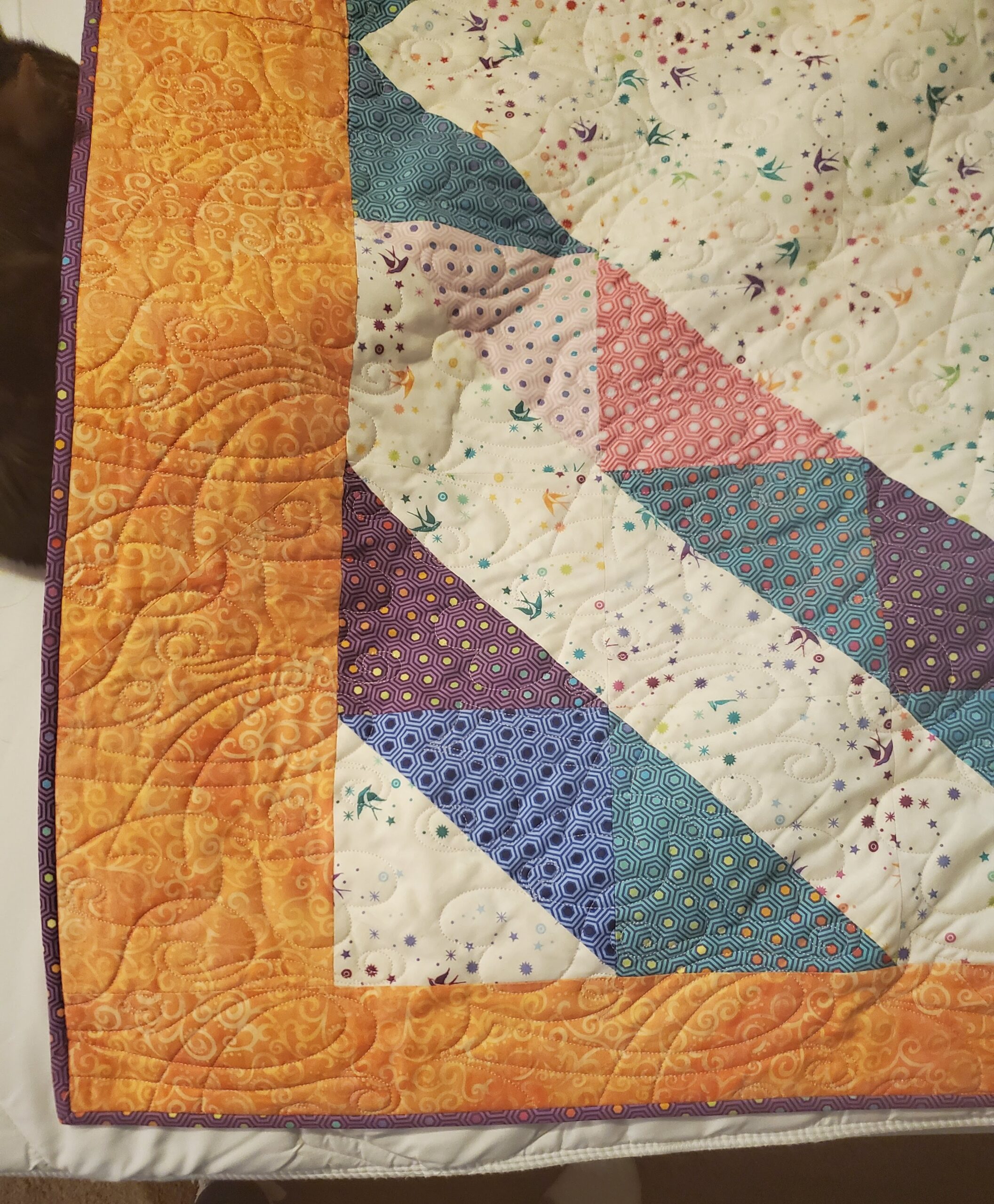 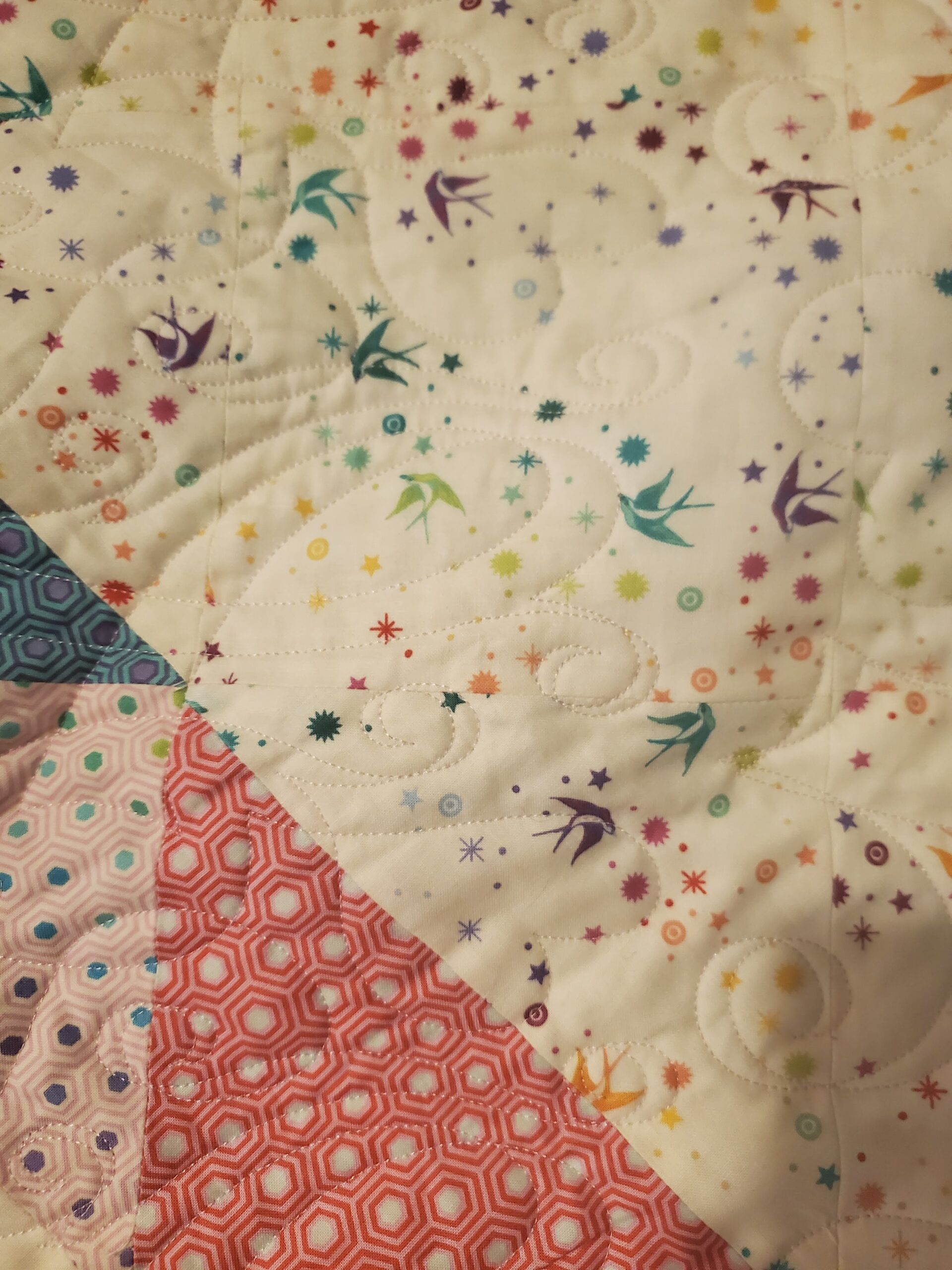 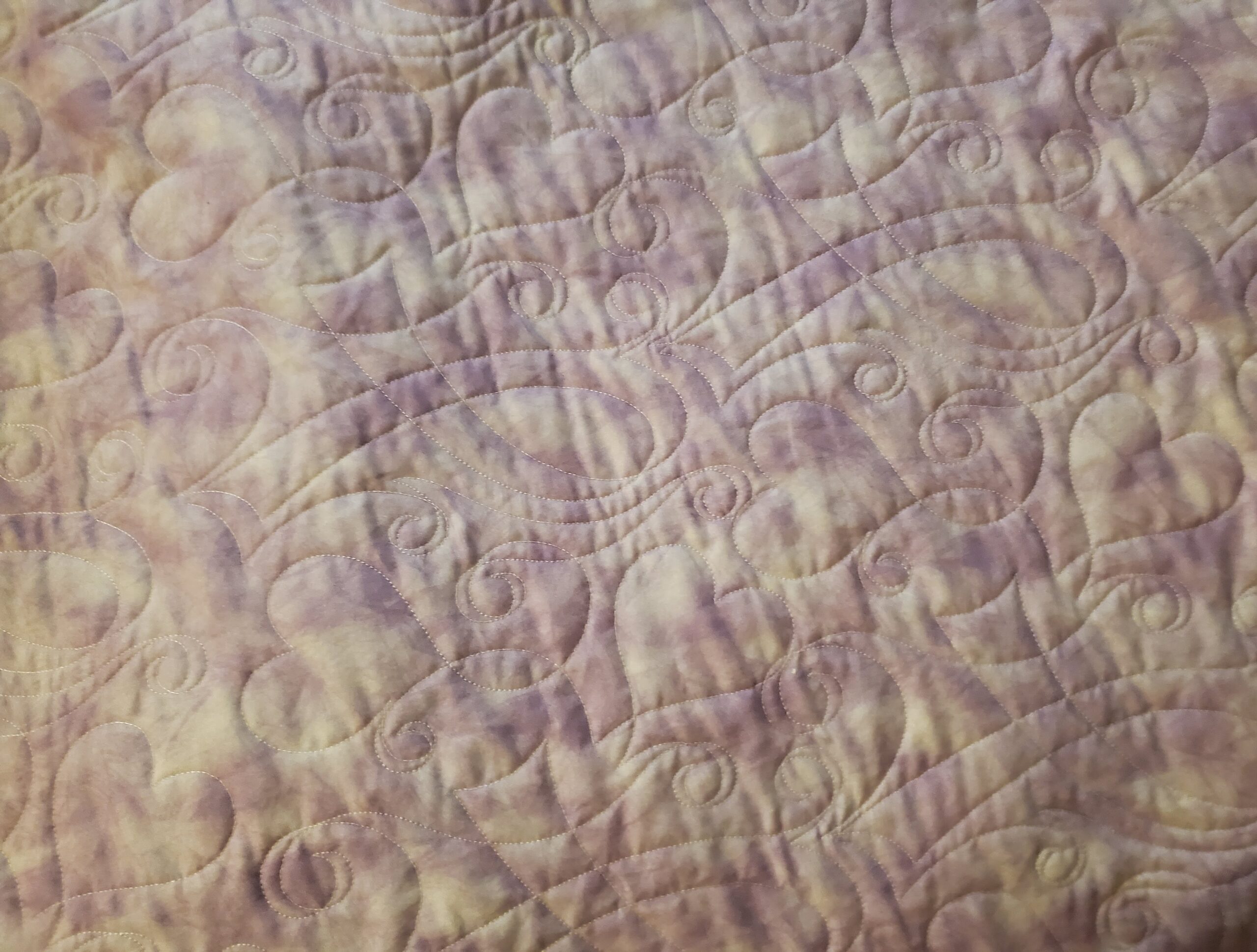 As you can see, the stitches all across the quilt (which have a name that I don’t know) have lil hearts and cancer ribbons in them. How awesome is that!! 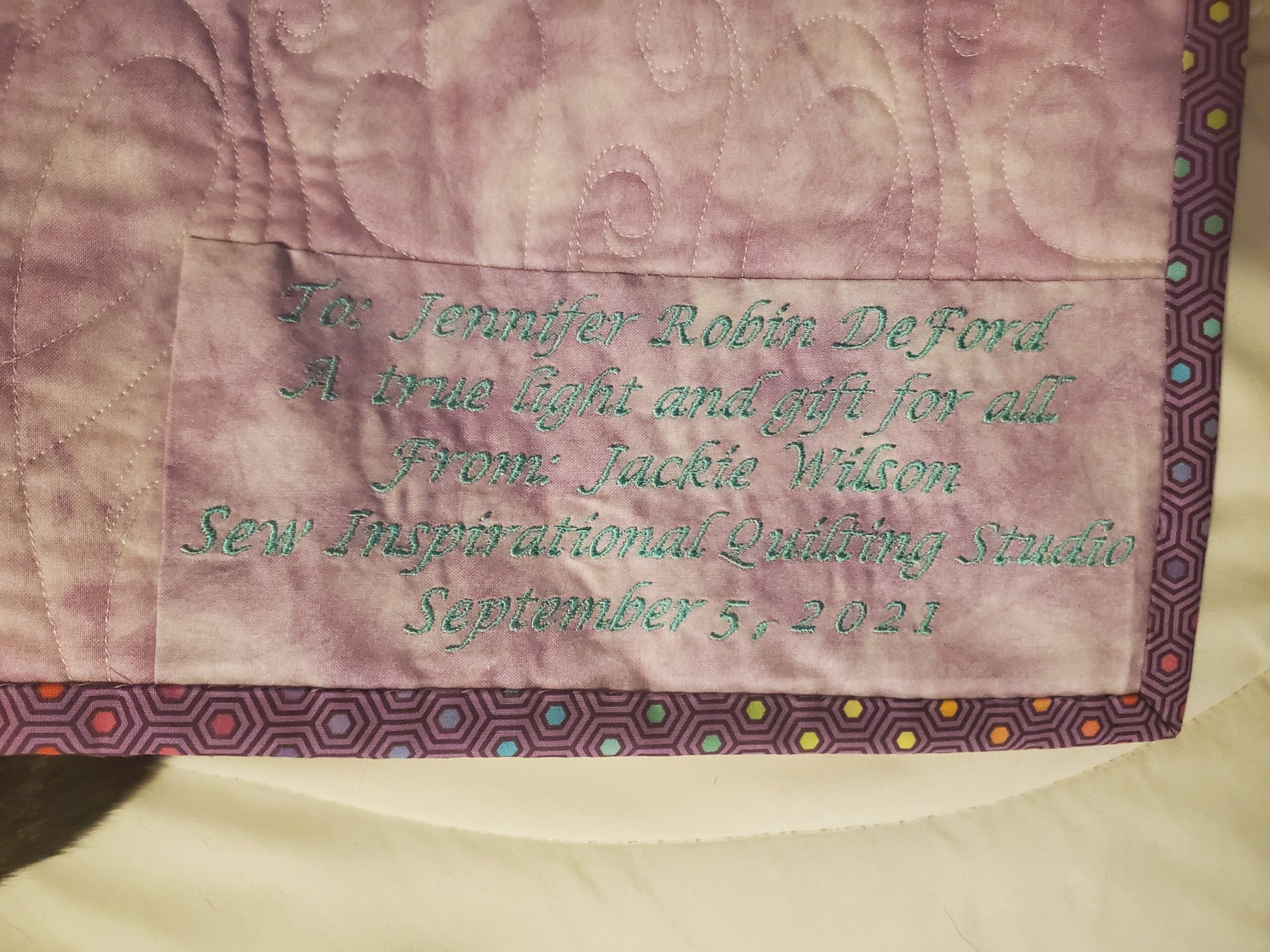 Yeah, so that made me happy. It’s on the wall, but since apparently I can’t math, it needs one more clippity. So no pictures of that yet.

Mom threw Piper’s ball, and it went on the shelf. 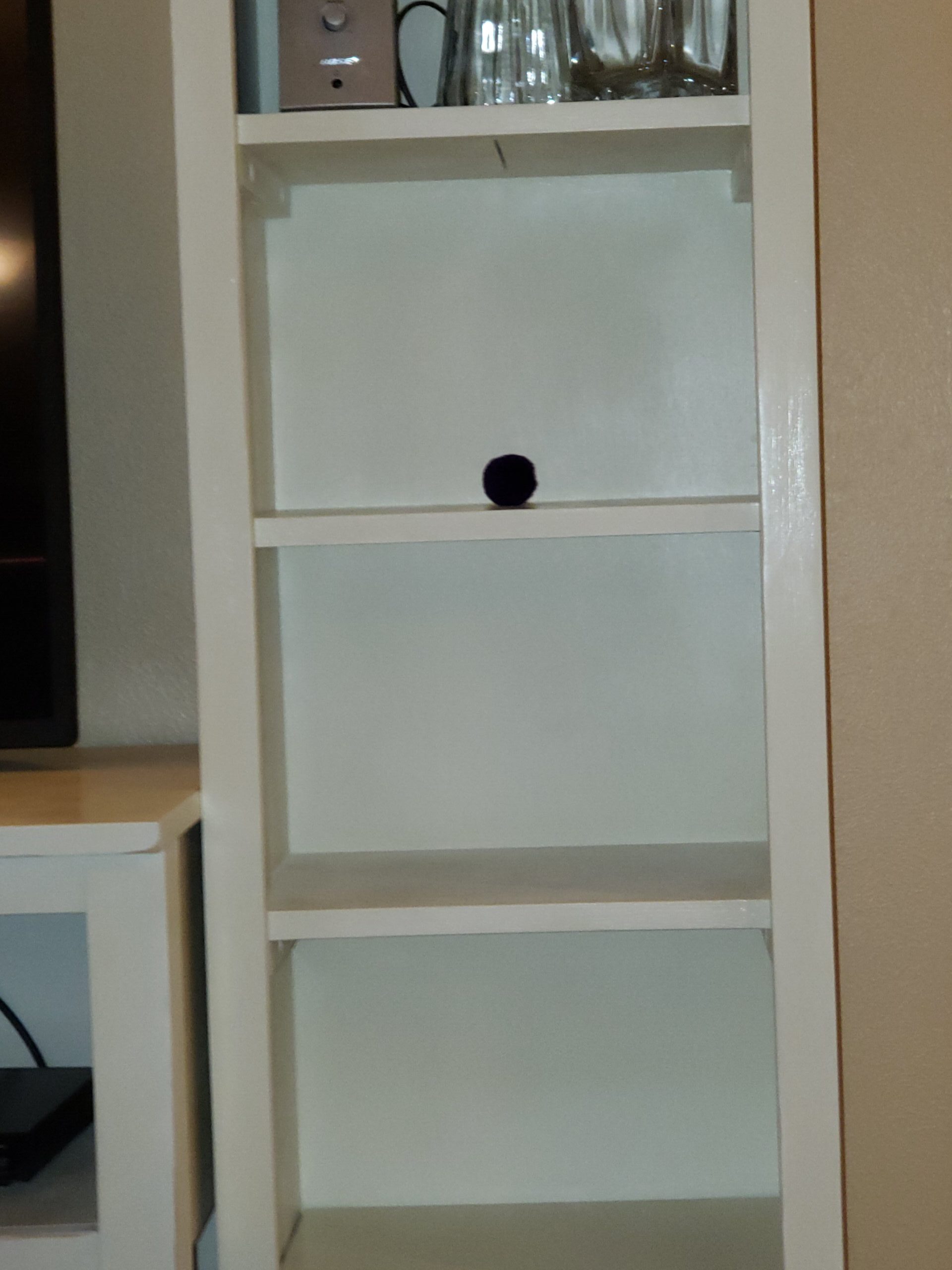 She took that picture, and the following video. She said that Piper knew it was on the shelf, but jumped up to the wrong one and was very confused that the ball wasn’t there. Mom wasn’t quick enough on the draw to get a video of that, so you’ll have to settle for this:

In redecorating, my parents replaced the rug in the entryway with a new one that looks like white marble. It’s pretty cool. Even cooler, though, is that I got the previous rug to put in my room. I have an undying love for area rugs. 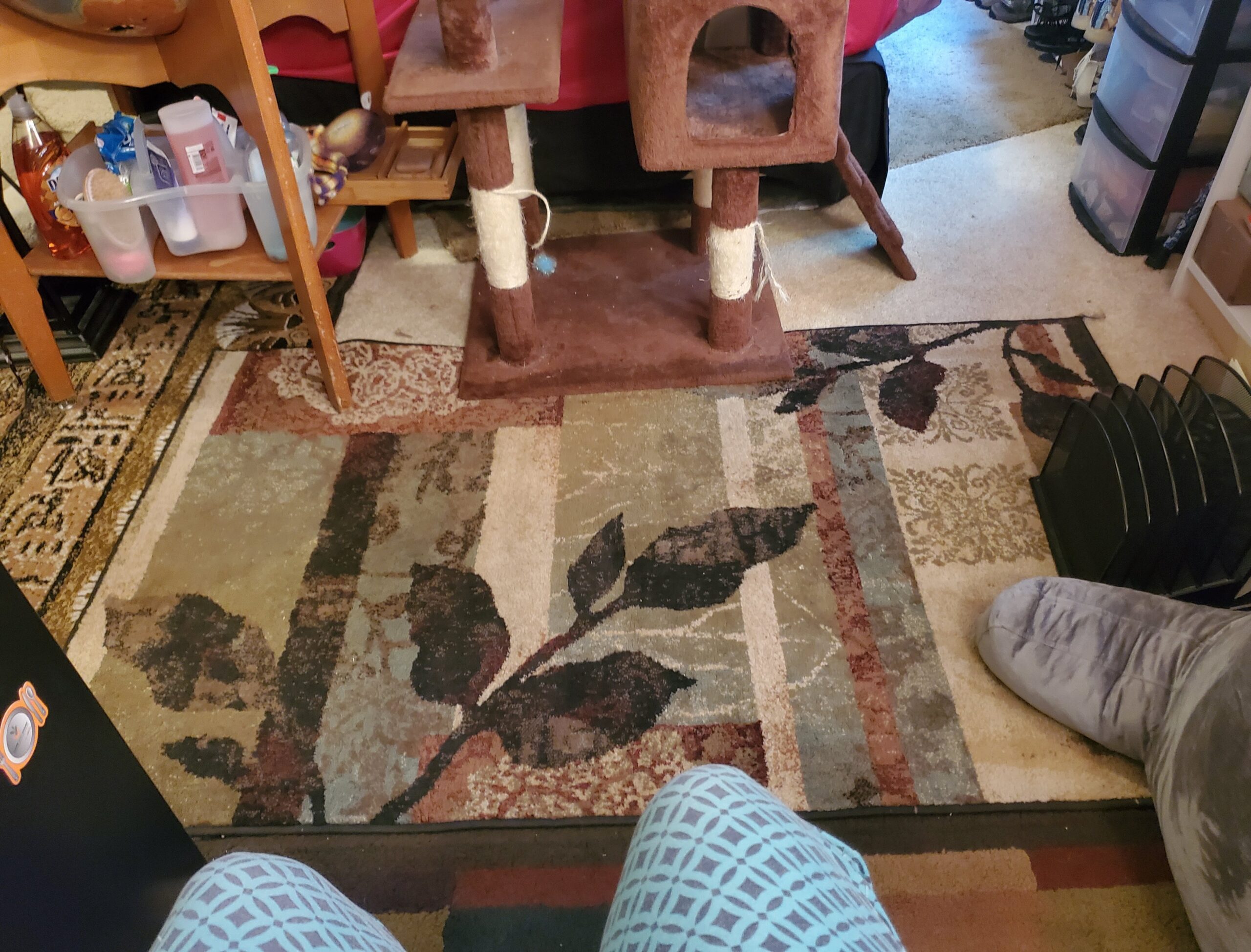 I don’t think I’ll even need any carpet tape for this one, because the globe and the cat tree should hold it in place *__*

OK, I mentioned I’m drowning in blankets, right? Life to blanket! This is partially my fault. I don’t remember whether or not I ever expounded on my Blanket Rescue, so here it is maybe again. At Hamlett, as the cat lady, I was also the laundry lady. People would kindly donate blankets, and we’d use them on/under the dogs. But sometimes, the blankets would be new or like new, and too cute to get gunk all over and run through bleachy loads of laundry; and I would take those ones home.

Well, one time, dad and I pulled up to the Hamlett parking lot (this was when we used to carpool). There in the parking space lay a crumpled-up SUPERMAN BLANKET again in new or like-new condition. Of course I took it inside and initiated it into The System.

But after a couple of uses for dogs, I decided it was way too cool for Hamlett, and took it home. There, I draped it over my hideous old desk chair, though it was way too cool for that too XD Well, as I have possibly mentioned, my parents got me a lovely new desk chair for my birthday. It needs no blanket draped over it, so once again I found myself with another extra blanket.

Then I had a brilliant idea. Long, long ago, I removed the incredibly wide door from my closet (dad put it in the attic) so I could have access to that corner of the room. So now I got a tension rod and some curtain clamps, and made myself a new closet door: 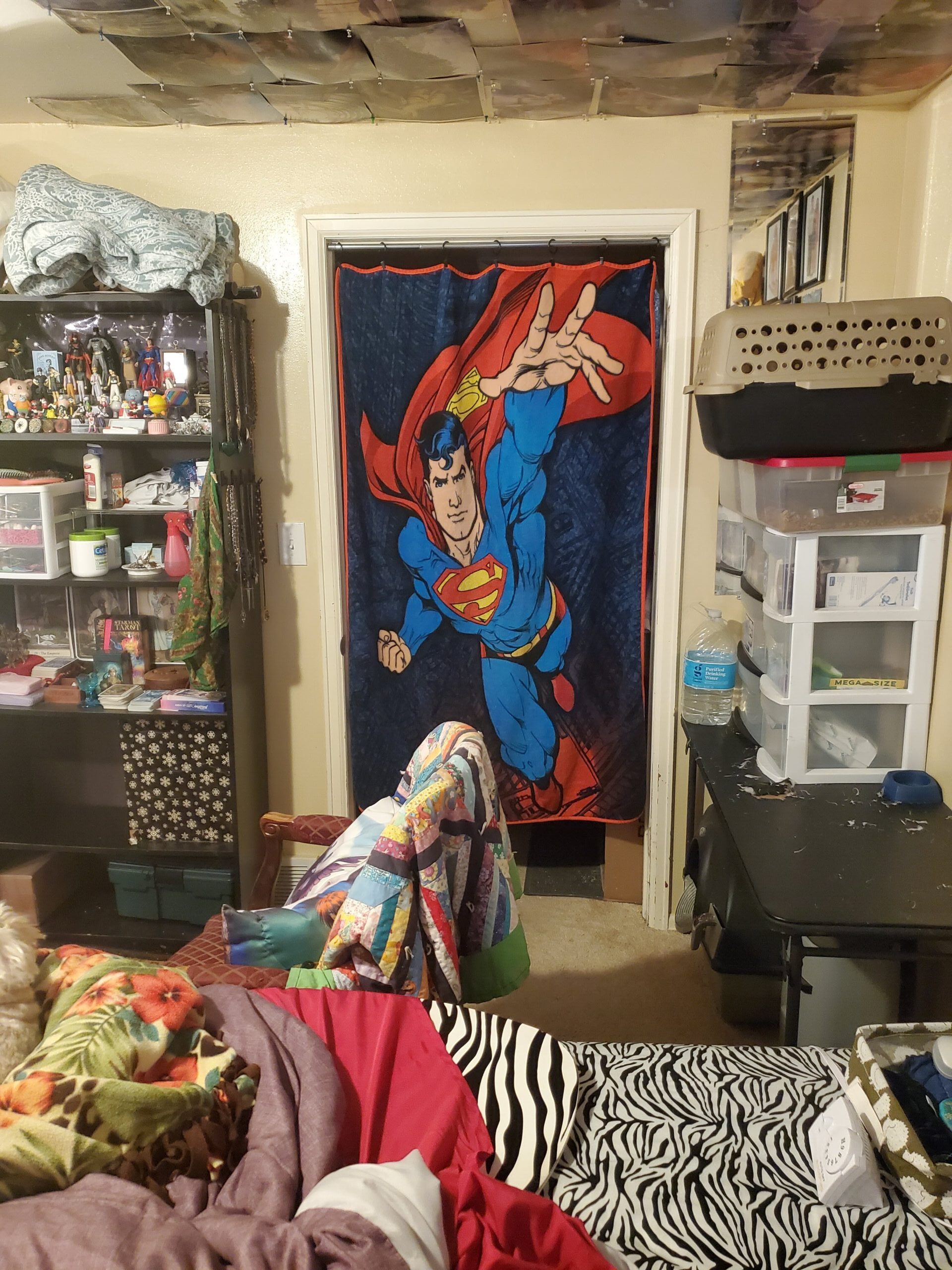 Doesn’t it look amazing?? I’m soOoOo happy with it. And when the closet light is on, he glows. Here’s a closer-up shot of that, with me because I love selfies and because it looks like he’s about to grab my head: 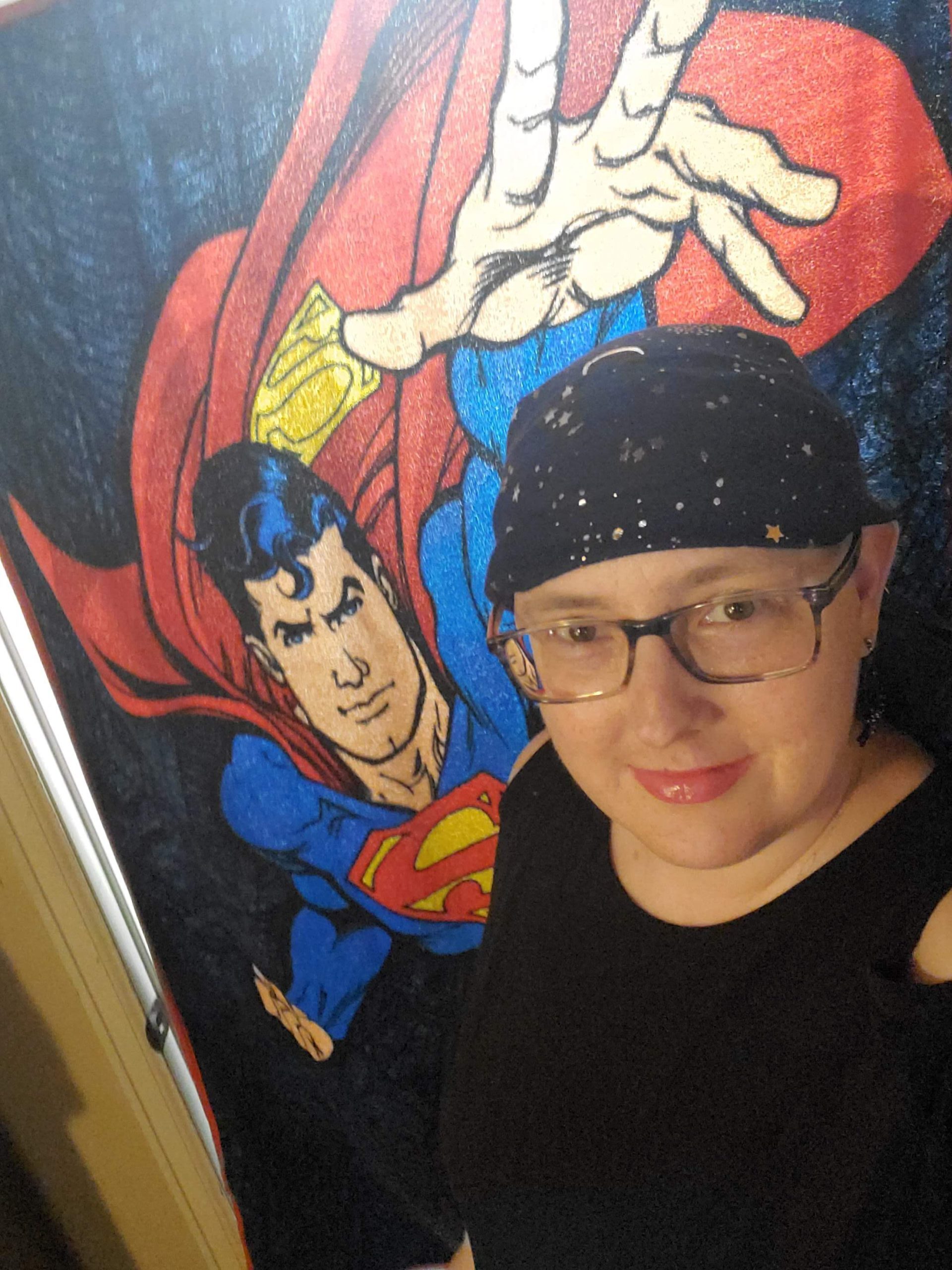 I bought this awesome boba cup:

It’s about as spillproof as you can get, and came with two reusable straws. Then I promptly ran out of my Witch’s Brew, so I’ve only used it, like, three times XD

This year, dad’s done a bunch of gardening, including both decorative and produce plants. We’ve had a plethora of small tangy tomatoes that are excellent in salads. Sometimes he picks a bunch of them and brings them inside in a bowl, and tomatoes have never been this cute: 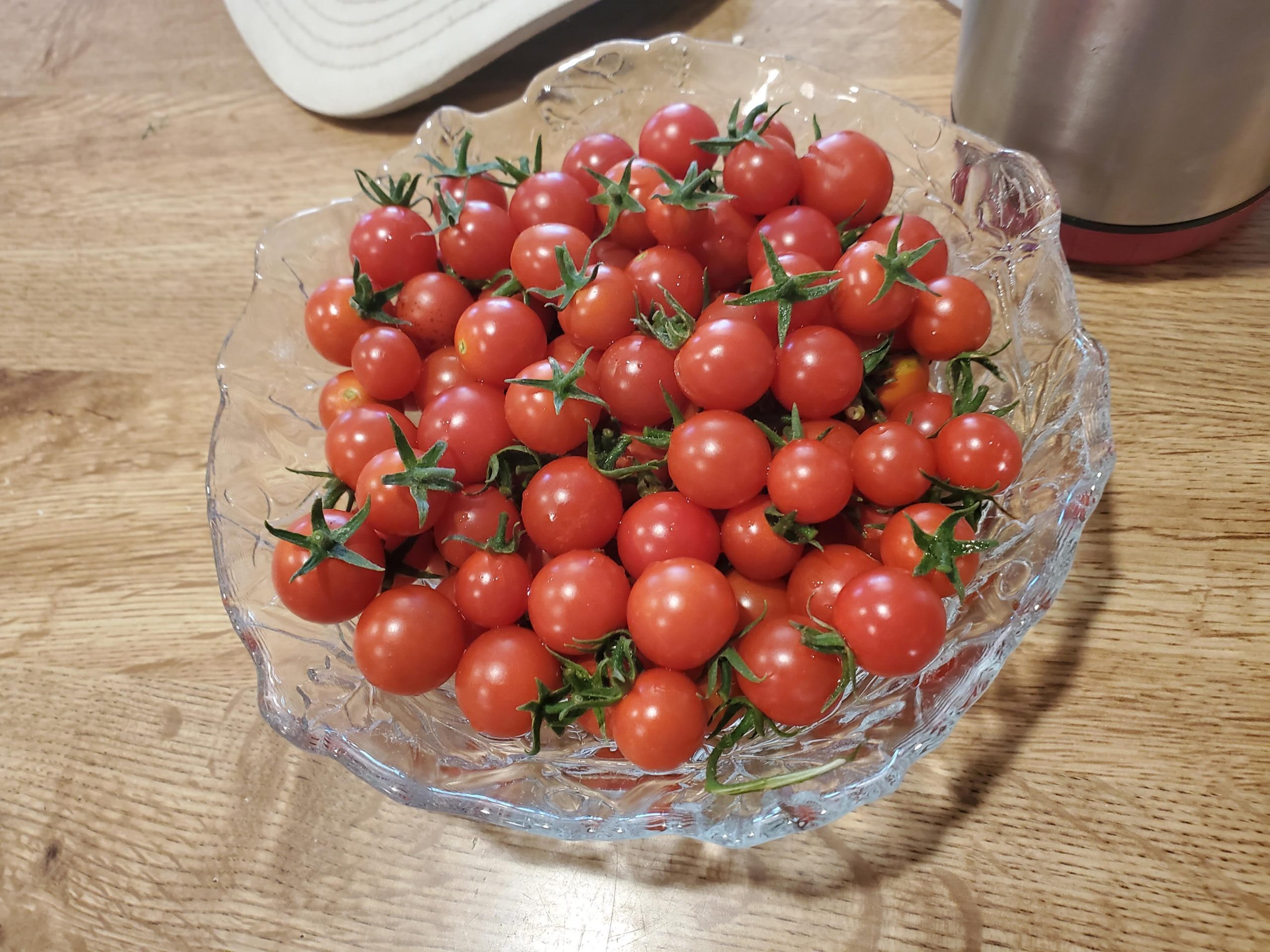 That night there was a football game: Air Force against Utah State. I’m a casual Air Force fan (more because they’re in town and I’ve enjoyed being at the games from time to time than because I’m devoted to them specifically), so I watched it. And, you guys, what a ride. 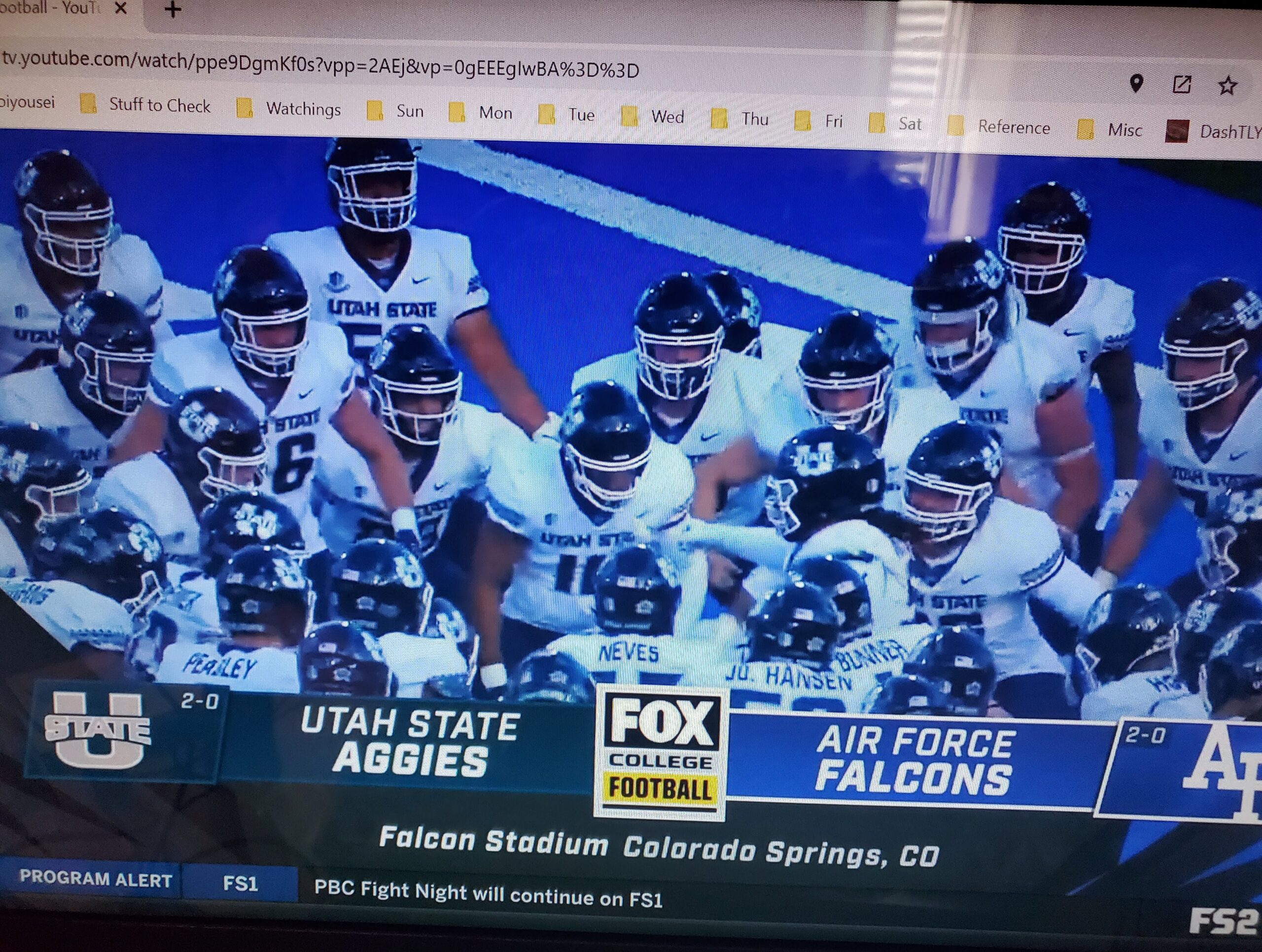 First of all, I love it when the teams do this ^ The Falcons actually looked a lot funnier and cuter bouncing up and down, because they put their helmets closer to each other than Utah did, but I couldn’t get a clear shot of them. Still. Cute and funny.

Secondly, Utah has a quarterback (Bonner) that is roommates with wide receiver Bowling. And the announcers WOULD NOT STOP mentioning this. I was giggling my ass off after not too long.

AND THEY WERE ROOMMATES.

Here are some direct quotes (I went through the game again today to transcribe as many of the best ones as I could):

“To be the roommate of your quarterback — I mean, you’re gonna get a lot of balls thrown your way on big moments.”

“When it’s your roommate, I mean, you just know him, right? You spend a lot of time together. ‘Hey, throw it to me over this shoulder. Throw it to me on this side of my body.’ He knows exactly where to put it.”

“Young receivers on your way to college: make sure you become roommates with your quarterback, because if you do, you’re gonna catch slants all day for touchdowns.”

And then something happened “roommate to roommate,” which sounds almost more euphemistic than anything else here.

AND THEY WERE ROOMMATES.

I told my brother and parents about this as best I could, and they all laughed… but it’s hard to get across how easily recognized the phrase is in fandom’s cultural consciousness, and how much I was dying every time the announcers talked about it again.

It didn’t help that Devin Gardner, who of the two seemed more enthusiastic about the roommate thing, speaks in a similar cadence to Frank the plant from Harley Quinn: The Animated Series, because that’s the gayest of all shows. Also, Harley and Ivy WERE ROOMMATES.

I already said that I rarely use flash for my pictures, but I was lying in bed and took a selfie that I thought looked kinda cute even without it: 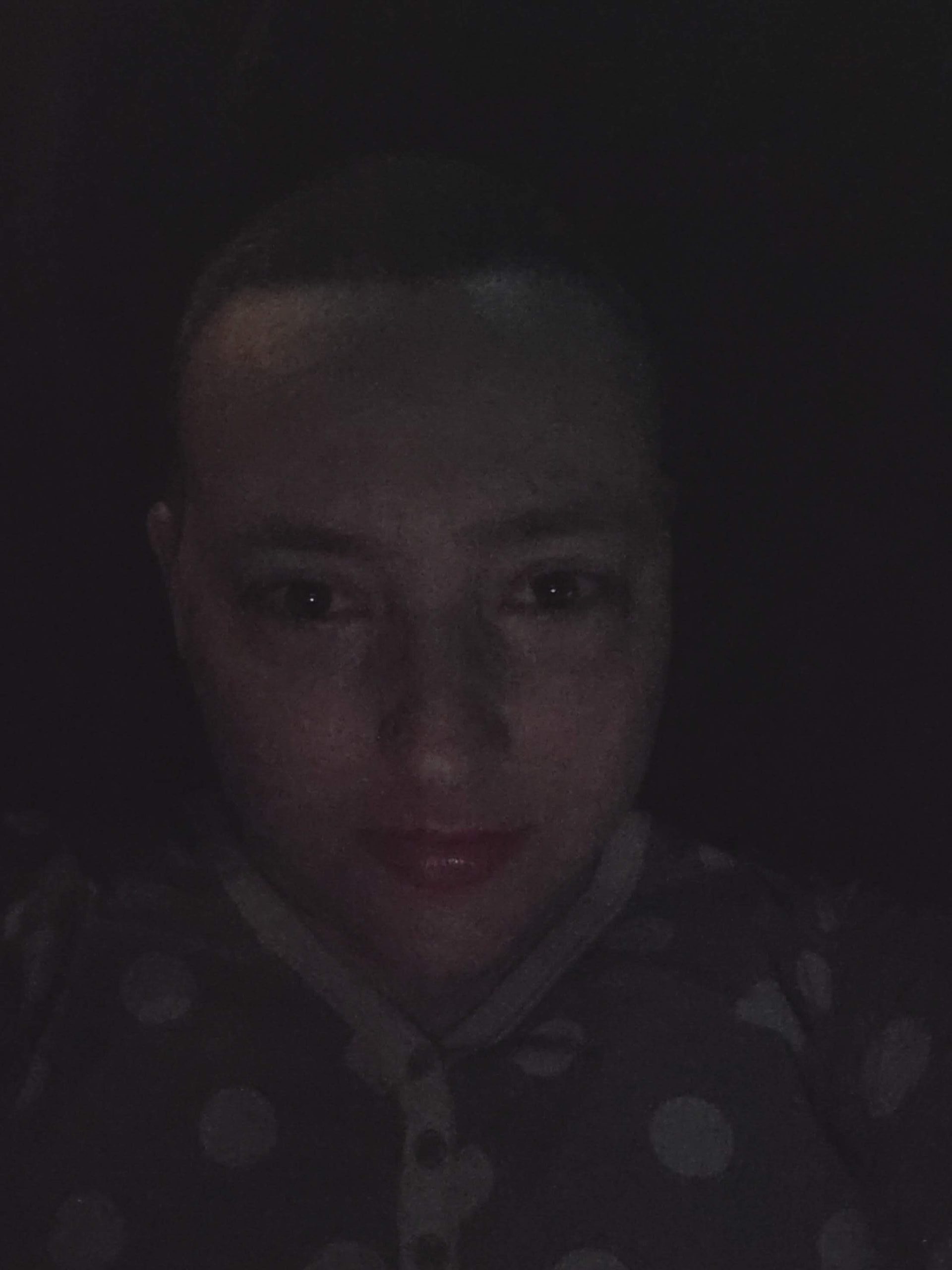 Yes, I lightened it up just a little. Still prefer no flash, though.

Also here’s a mystery and its solution: 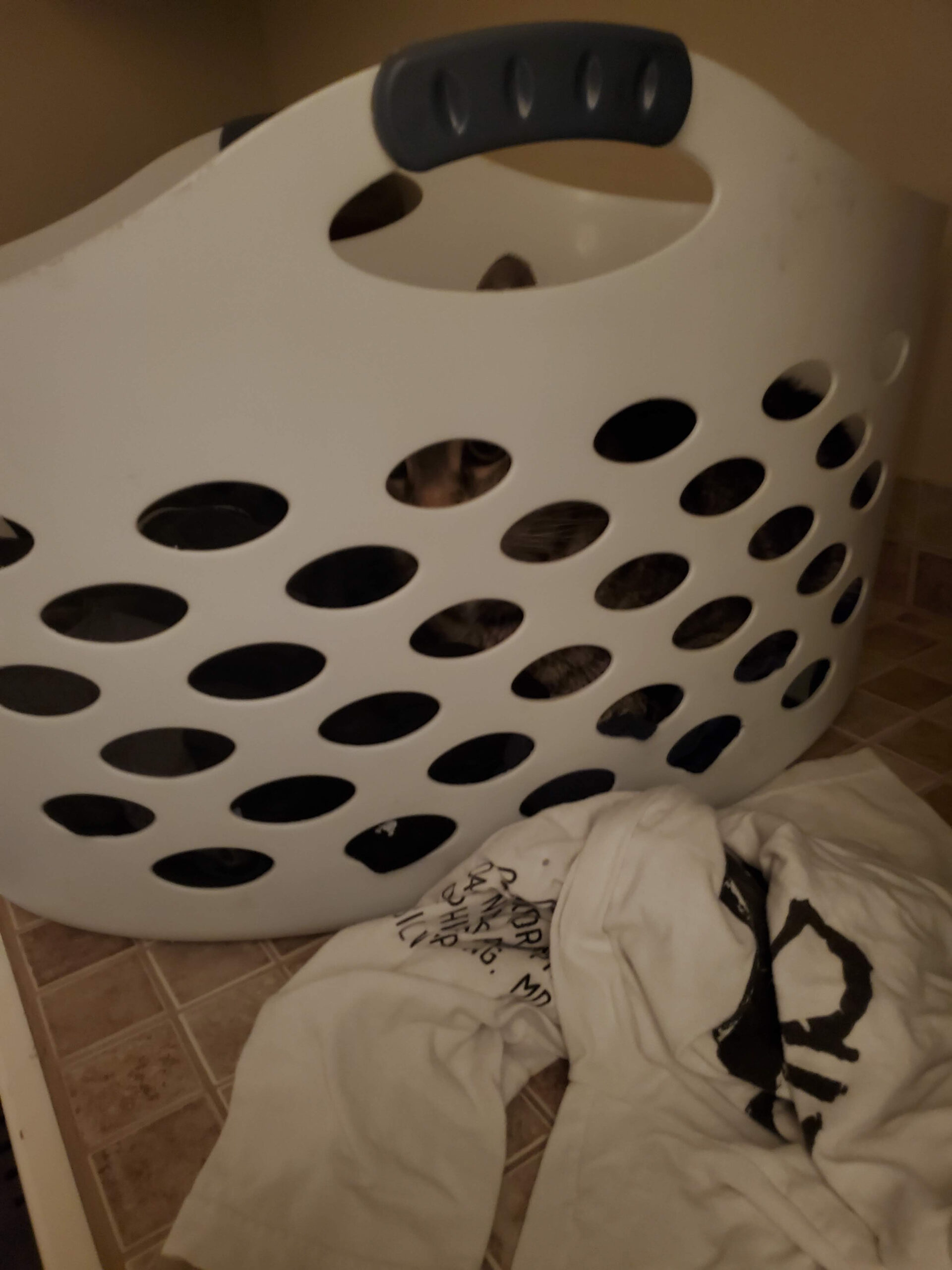 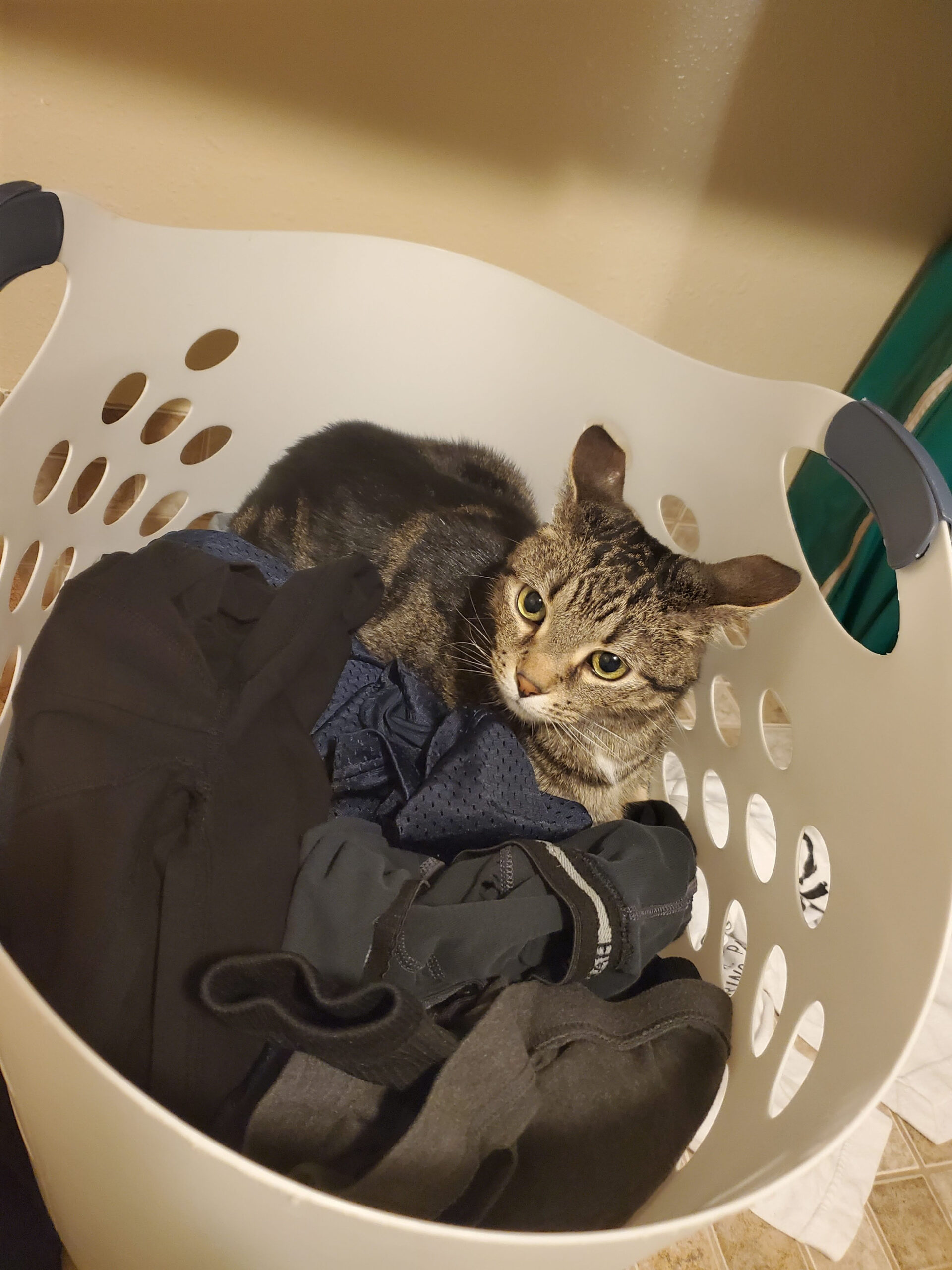