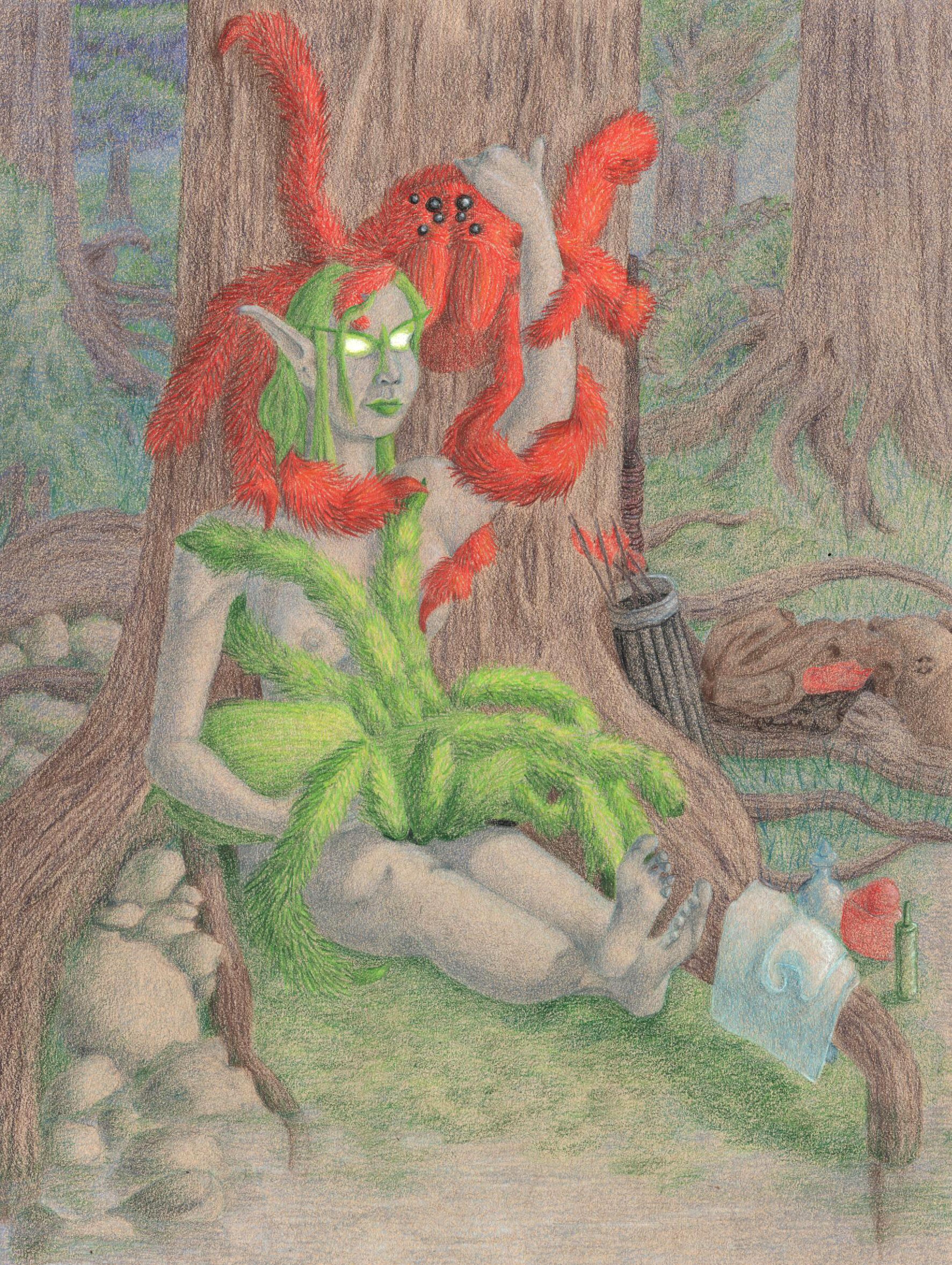 This is a commission for johnnyd2: a WoW nelf attempting to bathe but inhibited by her spider pets. It’s a spiritual successor to my long-ago piece Ashenvale Bath. johnnyd2 also paid for a short story to go with the picture, and here it is.

Ashenvale’s vast forests, with their misty obscurity and deep shadows of blue-grey and purple, might easily render an entire army invisible (which both Alliance and Horde rather hoped for), not to speak of single travelers slipping in and out of the earth-scented dimness. Despite the excellent cover, however, greater coincidences happened every day than a night elf’s being caught naked at a silver-sheened pool deep in the woods by some inconvenient watcher. And for this reason, Therrenyl made a careful and minute sweep of the area with her eyes and her hunter’s senses to be absolutely certain she would bathe alone.

Beyond her own skills, another way to be sure was the serenity of Ticki, the largest and eldest of her spiders. Observing Therrenyl’s intentions, but having no such herself, the longsuffering pet rested her black and red body on the moss near the pool and allowed her legs to relax outward. And spiders were such shy, jumpy creatures that, had there been anything to worry about, Ticki might have sensed it before the night elf did.

Therrenyl removed her cloak, her backpack, and her bow and quiver, and found places for them against large roots of the tree that stood next to the water — on the opposite side, of course, where the moss was less saturated. Then she pulled her toiletries from the bag, draped the small towel and washcloth over a high-arching root, and set the bottles at the spot closest to the water that would actually hold them; for the moss extended out in places over the surface of the pool as if in a deliberate trap for the unwary.

Last of all, she stripped down to nothing, half folded her clothing, and laid it in an uneven stack on the root that held her cloak. It all immediately slid off, so she rearranged it. Twice. Once confident it would stay where she’d put it, she stepped back over to the edge of the pond. Blue-grey toes wiggling in the wet moss, she looked around one last time, and paused before moving out into the water.

Ticki had risen, tightened a bit, and turned toward the forest beyond the tree whose feet Therrenyl had covered with her belongings. The spider waited for something, rather than with any anxiety, in a blend of patience and some disdain; and Therrenyl could guess what it was before she heard them herself: other spiders moving through the boughs at high speed.

There were only two that would come rushing across the woods toward her at this point, the rest (besides Ticki) enjoying some time off with Therrenyl’s sister in Azshara as they were; so she turned fully in the same direction Ticki had, and likewise waited. But even she was a little startled at their precipitous burst out of the upper branches and around the bole of the tree. From this close to, she could sense their uncomplicated spider emotions: exuberance, pride, happiness; and she sensed Ticki’s too, like a mental roll of eyes at younger spiders that still became this excited at finding their master again.

Greenstar threw himself against Therrenyl’s leg and began to climb her. She’d really rather he didn’t, so she pushed him off with a laugh and sat down between two large roots, where he immediately moved onto her lap. Behind, Flamestar dropped down next to her head at an odd angle and wrapped arms around her as she raised a hand to pet the orange cephalothorax.

They were so proud of themselves that the first thing she needed to do was probe into their report on the mission — the first independent mission she’d ever sent them on, the success of which would mark them as properly initiated hunter’s pets ready for field work. She sorted through the ideas she picked up from them, sifting for every specific aspect of the task and observing that they’d done exactly as instructed: the traps outside the new orc outpost were all stealthily sprung, and those closest to the walls even gummed up with spider web, so a company from Astranaar could more quietly and easily raid the place. Pleased at being the one the Sentinels came to for such work, and pleased again to allow her pets in training to cut their teeth on it (as it were), Therrenyl considered herself triply pleased at a mission well completed.

The young spiders, in turn, would sense that feeling as well as her pride in them, but that didn’t stop her from petting them both vigorously and praising them aloud. “Who’s a good girl, then? It’s Flamestar with her pretty orange hairs! And Greenstar is my loving lad! Who did an excellent job on their first mission? My babies did! My darling spider babies! Who’s going to eat all the orcs? My babies, yes, indeed!” She enunciated none of these words as if she wanted them understood by anyone besides aforementioned babies.

The latter snuggled affectionately closer, settling in as if for a good long cuddle. Therrenyl laughed again, though this position wasn’t entirely comfortable. Flamestar cradled the night elf’s head in her front several arms, true, but Therrenyl’s back had no support and would feel better against the trunk of the tree. Then, although she’d developed in her neck and face and arms a fair resistance to the irritating hairs covering this type of spider, her torso, midsection, and the entirety of her legs had no such immunity. She already considered ruefully the rashes and the cricky spine sitting like this would likely give her.

When she awoke feeling somewhat groggy, the spiders had not moved except to accommodate her slight slump to the left. She sat up straight, back protesting, and her pets seemed to awaken too; the legs encumbering her in various places squeezed, and the happiness and love emanating from behind glinting sets of eyes flared up. Therrenyl looked around as best she could with Flamestar’s appendages in the way, and noted that the sun would soon set. That made it an hour or two she’d dozed. “Which means,” she added in a chiding tone, “my bath will be an hour or two chillier.”

These spiders, like Ticki, had no interest whatsoever in bathing or swimming, an attitude they communicated to their night elf as easily as they did their joy at being with her. Therrenyl got the feeling they wanted to cuddle all night whether she had a bath or not, and that it might take some effort to keep them from jumping her again, after the bath, before she dried and dressed. She hoped they would understand that she didn’t need to be dealing with their irritating hairs under her clothing all the way to the next opportunity to clean up.

That last concept seemed to make its way across to her green and orange friends, for they shifted guiltily. Of course shifting caused them to rub against her even more, which Therrenyl tried not to dwell on lest she make them even more guilty and wiggle more in place. Instead she said, “Really, you two, I need to take my bath.” She started pushing at Greenstar’s body, pulling at his legs, trying to remove him from her lap. But his claws that could reach the tree locked in beneath its bark, and every leg she lifted came back immediately she moved on to the next one. It was like trying to pry something from the hand of a determined toddler finger by finger.

She couldn’t get a very good grip on Flamestar, though she pushed at her too. And it seemed the young spiders took heart from each other’s similar defiance, for they somehow managed to tighten in even closer. Therrenyl gave a despairing laugh as she sensed Ticki’s continual disdain not too far off.

Of course she had the option to use her hunter’s influence over her pets to compel them as she chose, but she wasn’t the best beast tamer in Ashenvale for nothing — keeping the relationship friendlier and more casual meant consistently better results. So she tried to convey what it was like being in the water, scrubbing her skin, rubbing shampoo into her travel-tangled hair. All her spiders could swim, but didn’t much like it, so perhaps this would encourage these two off of her. Unfortunately, they seemed rather to want to rescue her from such sensations than allow her to go find them, for they clung more tightly and manifested stillness. At least that might prevent them from giving her quite so big a rash, she reflected.

She would eventually have to start putting forth disappointment and sorrow at the noncompliance of her friends, but she would wait a bit before hitting them with that unpleasantness, just in case she could ease them off by some other means. In any case, it seemed her bath would be even colder than she’d anticipated by the time she finally found some way to get to it.

A hospital week and a Disney+ day

Video blog episode 3 (The Princess and the Goblin)

Some drawings and some Disney properties

In which I draw some horror movie figures, chatter (yes, more) about the Conjuring universe, and give some love to my Little Animals