PL: TBoGaH, FiFiF, Guides of Faeryland and other Patreon stories, HOH, HR briefly, a cool cool drawing I made of Batman’s enemy the Scarecrow

Since I’ve entirely lost track of whatever thread I might have been carrying through PL’s in the past, I’m just going to flail around and see what I talk about. Forgive my inevitable repetition of stuff I mentioned way back when.

TBoGaH — I just finished chapter 18 the other day. My biggest fan enjoyed it, and she’s accurately guessed something I’m not revealing ’til later, which means I’m writing it convincingly (and maybe too obviously; we’ll see). I can’t get her to tell me her guess about the eventual husband of the main character (this is Regency romance, remember), but I think I’ll attack her on the (perfectly true) front that I need to know what she suspects so I can decide whether I’m writing that too obviously too XD Not like there’s some big twist or surprise at the end with either of these points; just, if you can see from the beginning whom the main character is going to marry, why should you be interested in reading about her testing out various young men with an eye to Getting an Husband?

Fate is Found in Faeryland — Since this is a sort of spiritual sister to TBoGaH (which is hilarious), they have to be mentioned back-to-back (which is hilarious). I’m working on the next chapter right now, and anxious to get my friends out of Gulaš. The story will move a little more briskly once they start traveling again, with what I hope will be points of interest, and even some action! Imagine that!

Guides of Faeryland — Since I invented the half-serious-half-silly world FiFiF is set in, that means I can use it for original purposes as well. Of course I have to refer to the faery monarchs (except myself) merely by color; but otherwise there is room for all the original characters in the world! I’ve been inventing them and sketching them, but haven’t written any full stories yet. When I do, it’s all going to go on Patreon. I need more original content on there if I’m ever going to get anyone else to join (which I long for), since the majority of what I post/have posted there is Saitou & Sano stuff, and we dedicated fans are few and far between these days. (And it doesn’t help that I’m not allowed to advertise on AO3.)

I’ve advertised on Pillowfort, where my friends have been amazing about reblogging — but my mutuals already get original fantasy content (in which most of them already aren’t interested), so there’s not much to entice them to my Patreon. Perhaps with PF’s new paid tier (whenever that appear) I’ll be able to get the word out to more folks. In the meantime, I’m not really sure where/how else to advertise. I have zero desire to make an account/become active on these other sites like Tumblr and Twitter and shit. I don’t know that my visual art is enough of a draw (pun!) to advertise on DeviantArt, though the visual art is available on all tiers, including the $1…

I could really do with the money (even $1 a month!), but more than that I want people to interact with through art. I sometimes see groups of people that all have a Patreon together, and I sometimes think that might be fun and effective… Anyway, I’ll shut up about this now, because it’s just more of the same “OMG nobody online pays attention to me!” that you always get around here.

Still, I do need to mention some Patreon stories. Right now I’m working on four of thems. The first is G.G.’s signing bonus story with no title yet (Trail of Light was a giftmonth present; she didn’t join my Patreon until after I’d started that, so she still gets a signing bonus). This one is another fanfiction set between chapters of her Desert Flowers and Cactus Spines. Once I had it all plotted out, it was pretty easy to get started on… but the first scene has dragged to a halt as far as ease of writing goes. It was one sentence to a sitting for a while, but it’s picking up again, so I hope to have that scene available for Patrons to read soonish. And after this, I think the dam will burst. I decided to do third-person limited, which is a POV I rarely write, just for the opening and the ending… but the next scene will be Adinal, and I think I can handle that much better. Also I need to play RDR2 some more for reference.

Next is Hot Green Tea, a request story of Megumi & Saitou & Sano, because pretty well anyone with Saitou & Sano is an OT3. It’s coming along well. This Saitou opens up nicely around Megumi. She almost kinda has him wrapped around her finger already, though they’re teaming up to help their beloved Sano at the moment. They’re all going to be so happy together T__T

After that comes Forgiving Me Flowers, a request story of Saitou & Sano plus all the other pairings. Story behind the story on this one: you may or may not remember my Sacred Vow from early in the millennium. I vowed to pair Saitou with every single other likable character in RK. I actually got off to a pretty good start before I couldn’t stand him not being with Sano anymore. And Forgiving Me Flowers was going to be another one of these pairings. I wrote the very beginning, but then lost interest and wandered away. But! For this request story, it came to me in a flash that the general concept — someone anonymously giving Saitou flowers and havoc ensuing — was still amazing, and could absolutely be used toward Saitou & Sano instead of the originally planned pairing. And that made me suuuuper excited about it. It’s all plotted out, and I’ve posted the draft of the first scene on Patreon (it was helpful that I still had that opening passage :D), and it continues to progress apace!

Lastly is Getting to the Bottom of Things: a Patreon Exclusive that nobody requested, a Saitou & Sano story with actual sex scenes. It’s based on an idea I’ve had about them for years and years, but that I kept putting off because it required… actual sex scenes. And I’ll let you know for free that, in the first sex scene, I’ve just reached the point of penetration, and thrusting has commenced. Groooooossssssssss. It’s pretty damn romantic sex, though.

I kinda feel like rearranging a few things to make it easier for me to post some stuff in multiple places. Gotta think about that.

If I’ve ever mentioned Forest of Death, it was so long ago that nobody remembers. Anyway, it’s the Aoshi & Soujirou installment of His Own Humanity. It’s going to be pretty intense as far as broken people hooking up goes, perhaps the more so because Soujirou’s neurodivergence seems kinda whimsical on the surface, and Aoshi appears to have all the support he needs. I’ve got a couple of parts to linear completion, and I’m making progress on the third. This story will cover a lot of the empty space in the middle HOH, and that will be nice. I look forward to making ebooks XD

Heretic’s Reward — Patrons get one month’s early access to new fiction, so I haven’t posted chapter 36 yet, just the >29 Interlude I finished some days earlier. But posted or otherwise, chapter 36 makes HR my longest fanfiction. I should have a party! But I don’t have anything else to say about that.

Drorin — I’ve been sketching a lot lately with a combination of graphite and white charcoal pencil. It’s all been exclusive to Patreon and Pillowfort (content I call “P Exclusive” on Patreon), so you won’t see it here. But anyway, I was liking so much how the white charcoal went down that dad got me a set of six charcoal pencils (white, dark, dark, medium, medium, light). I’ve only done one picture with those so far, and I love how it turned out. Aw, hell, why not just post it here now. PL’s have always been a lot about site maintenance anyway. Click the image for more information. 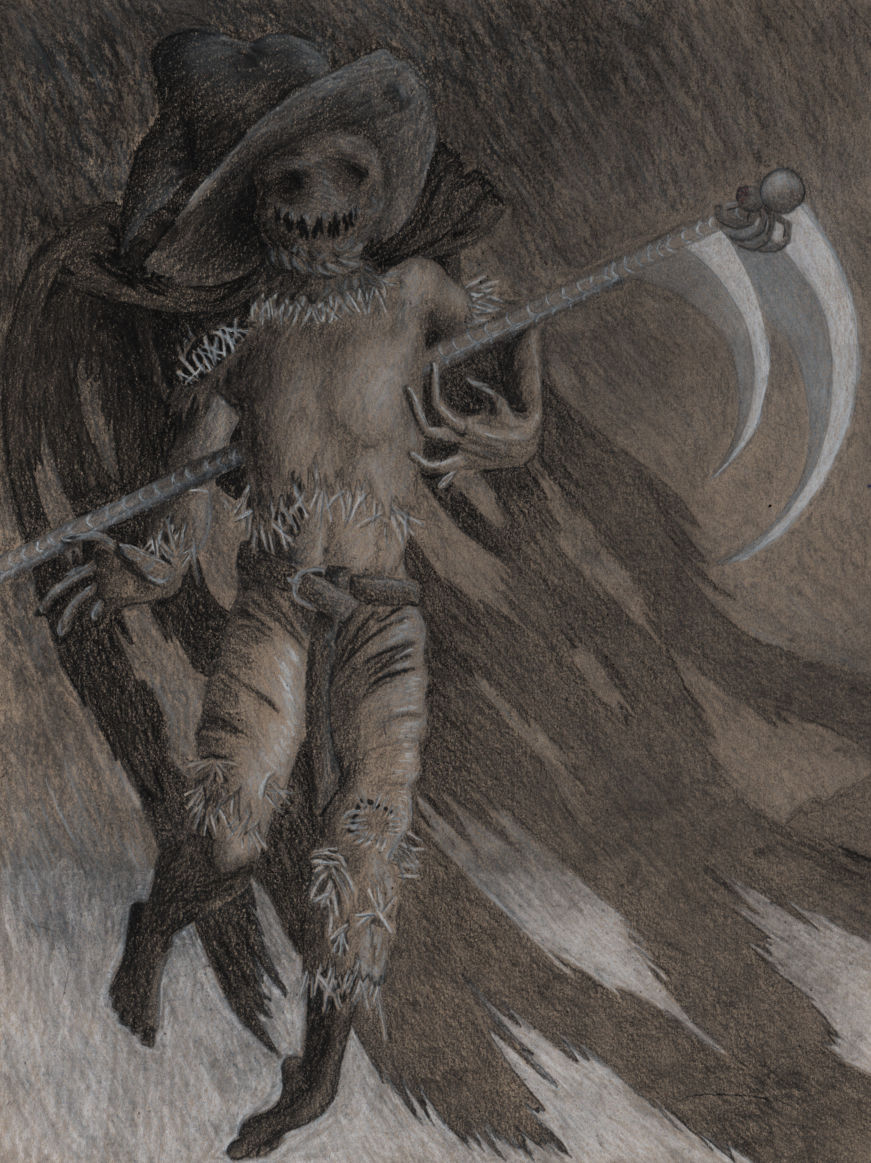 Beyond that, there’s plenty of other stuff I’ve been working on, but I’m tired of this entry. Goobye!